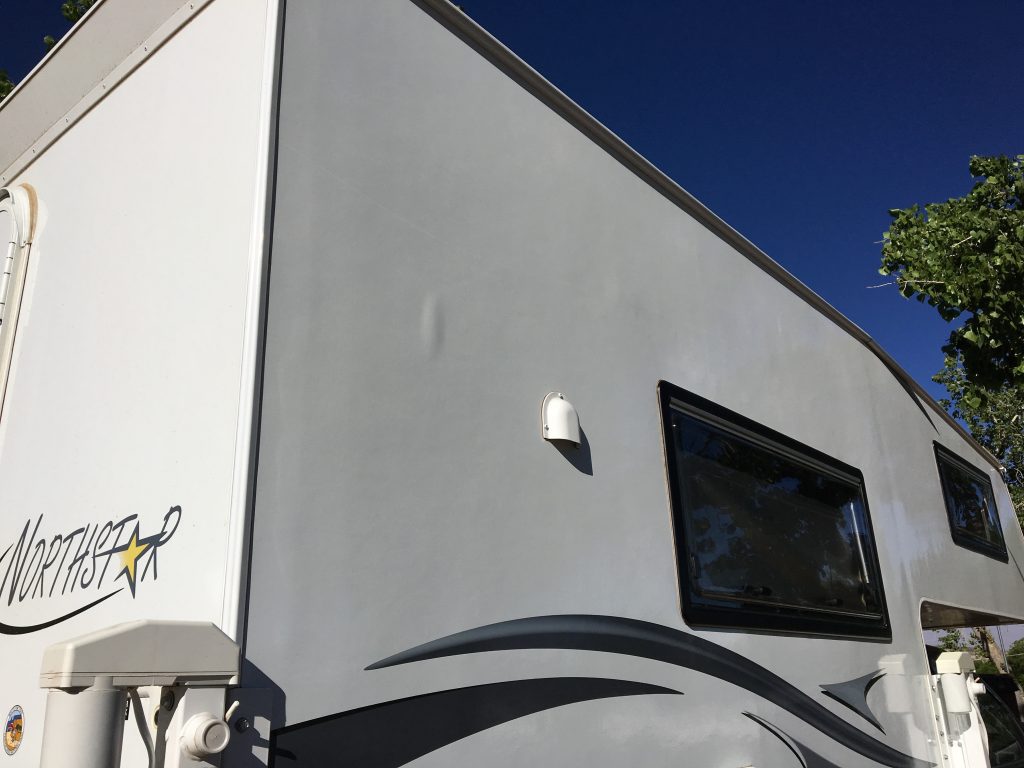 First, you might be wondering why we’d go back to the Northstar factory after just visiting there last September. Well, we began our two month-long summer adventure with no intention of traveling to Iowa, but with the discovery of a fist size delamination bubble on the passenger side rear, our plans suddenly changed. When I sent Rex Willet, the owner of Northstar Campers, photos of the bubble, he was surprised as me. According to Rex, the last time this had happened to one of their campers was in 2008. At first we were pretty bummed that we had to take time out of our summer trip to travel the 1,200 miles to Iowa, but the wife and I decided to make lemonade out of lemons and get the needed repair done, get some other items in the camper repaired, and have some extra goodies installed that we wished we had in the camper. We also decided to explore a few states along the way we never had visited before, always a plus in my book.

Repairing the delamination bubble was no small task. Rex’s crew had to remove the entire passenger side fiberglass siding from the camper and replace it with a new sheet of fiberglass. All of the jacks, windows, and lights had to first be removed to do this. The job took two full days, and required us to stay in a hotel for a night (yuck!), but the time invested for all of the work was well worth it. At first, we toyed with other options like installing a vent fan where the bubble was located, but in the end we elected to have the job done right to ensure no other bubbles appeared. The passenger side of our Laredo looks great now and you wouldn’t know that we ever had an issue. What caused the bubble in the first place? It’s hard to say, but Rex thinks that the defect occurred during the manufacturing process at the Lamilux plant and that the adhesive somehow wasn’t applied in that one particular spot.

What were some of these other items that needed repairing in our camper? Well, if you recall my recent review, we had a few issues that needed corrected. Our list included repairing a bent rear passenger jack mount (this damage was my fault), repairing a pulled out seat back button on the dinette, readjustment of the fresh water tank door, and replacement of a defective door strut. While we were there, we also had Rex install another fold out towel rack in the bathroom (having just one towel rack was never enough, we always needed another). But this wasn’t all. As a gift for my trouble, Rex gave me a digital rear camera to replace the weaker, analog model that came with the camper. I haven’t installed it yet, but Rex tells me that the picture display in the digital model is much crisper and stronger than the analog one.

Fortunately, our visit to the Northstar factory afforded us some quality time to talk with Rex. Rex is a very busy man, but he took some time to talk about some changes that he has recently made to his campers. As a result of my recent review of the Laredo, all of his campers are now being outfitted with a memory foam mattress instead of a spring mattress. The poor spring mattress that came with our Laredo was perhaps the biggest complaint we had with the camper. We were glad to hear about this change and think it will be a big improvement for Northstar. In my opinion, its a change that all RV manufacturers should make. If you think about it, one-third of your time is spent in bed, best to have a mattress that will make you comfortable on your camp outs and expeditions.

The other change Rex is making is to the dinette seat backs in certain models. If you recall, another complaint we had with our Laredo is that the wiring conduit for the front passenger side jack was in plain view and was just plain ugly (check out my review for a photo of the old dinette seat back). In my review I explained that this conduit should be hidden in some way and Rex agreed. Rex’s solution, and the one that I suggested, was to make the seat back cushions larger. While we were there, Rex had the rear cushions in our Laredo all changed out with larger ones and I have to say, the dinette now looks great. The wiring conduit is now hidden from view. Check out the photos. I think you’ll agree that the improvement is pretty significant.

What are some of the other changes that Rex had made? All Northstar campers are now being outfitted with a Valterra gray water hose adapter. Before, all of his campers were outfitted with a simple cap for the drain. It served no real function. When I picked up my Laredo last September I had one of these hose adapter caps installed. I explained to Rex that these are great for boondocking and made even more sense for campers outfitted with a cassette toilet, which in Northstar’s case is their entire lineup. To drain the gray water tank all you need is an old garden hose. Needless to say, Rex loved it. It would’ve been a relatively simple change at the Northstar factory if it wasn’t for the black color. The plumbing underneath my camper is black and that’s the color Valterra makes their adapters. Rex made arrangements with Valterra to have some made in white to match the exterior color and plumbing found in most of his campers.

Our second visit to the Northstar factory was terrific and we’re glad we did it. No matter how good a product is, issues sometimes happen. The great thing about Northstar is that Rex stands behind his product. If there’s ever an issue, he’ll address it, until you’re happy. Rex asked me a few times after picking up the camper if we were happy with the repairs. I told him, yes, and that I would be saying so on the website. Sure, driving the 1,200 miles to Iowa was a bit of a pain, but in the end the trip was well worth it. We had some much needed repair work done, had a few mods done, got to talk to an old friend in Rex, and visited some states we had never visited before. All of that makes for a good trip in my book.

Truck Camper Adventure is proud to announce that we will be covering the 2022 Overland Expo Mountain West in Loveland, Colorado, 26-28 August. Over 290 exhibitors of Overland, Adventure Travel, Outdoor, Camping and Motorcycle Gear [read more]

Truck Camper Adventure’s inaugural “Boondocking in the Desert” truck camper rally, held February 7-9 in Quartzsite, Arizona, was by all accounts a big success. A total of 98 people from 21 states, the Netherlands, and [read more]