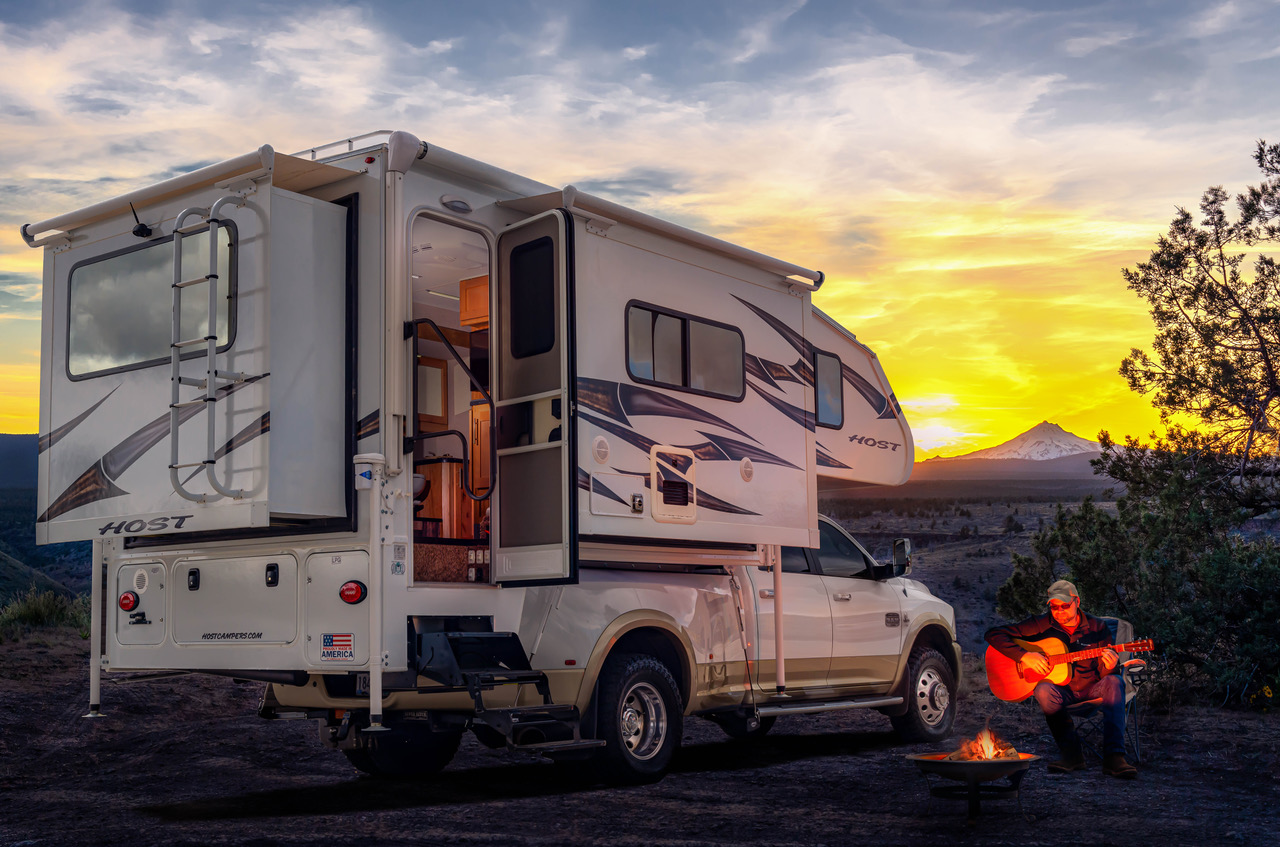 The truck camper is a great recreational vehicle. It allows you to go where other types of RVs can’t. Yet the one con bedeviling many campers is the lack of comfortable seating with most campers offering a standard dinette only. If you’ve ever sat in one, you know that the standard dinette is notoriously uncomfortable after a couple of hours. It’s also hard on aging backs. Obviously, some kind of recliner would be better, which is why Host Industries began offering a recliner option in its new Yukon 11.5 camper in March 2020. In fact, the Yukon is such a big seller it’s now Host’s second most popular truck camper, behind only the Mammoth 11.5. Yukon sales comprise a good 30 percent of total sales for the company.

“We developed the Yukon because we have a lot of customers who wanted to have recliners in a 11.5-foot triple-slide,” explained Randall Pozzi, General Manager of Host Campers. “We had to resize the rear slide then we had to make the driver side slide a little bit smaller to make it work inside. But the design is still very versatile because we can put recliners in there, we can put a U-shaped dinette in the rear slide, we can put a 6-foot couch with a removable table on the rear slide, we can have either a 4-foot couch with a table or we can do a full wardrobe in the side slide, or we can do a full laundry center, so it still has a lot of the versatility that the Mammoth has. It also has an entry door that is 2-inches wider.”

Exceptionally comfortable, the twin recliner offered by Host is made by industry giant, Lippert Industries. A part of Lippert’s Heritage Series, the recliner consists of a left-hand and a right-hand recliner with opposite arm rests and a center console with cup holders and a storage compartment. Two colors are offered by Host: a lighter cream and a charcoal gray with both cloth and synthetic leather options to match Host’s Pecan and a darker Smokey River interiors. The nice thing about the recliner’s location is that it sits directly in front of the flat screen TV and fireplace for comfortable viewing. Another nice feature about this option is that the removable table in the camper can be switched back and forth between the twin recliner and the sofa.

Like all Host campers, the Yukon’s interior is massive. The floor plan features a spacious dry bath and a 4-foot sofa on the driver side; a large kitchen, refrigerator, and coat closet on the passenger side; a recliner (or dinette) in the rear; and a queen-size bed flanked with twin wardrobes in the cabover. Unlike the Mammoth, which uses a slider door for bathroom privacy, the Yukon uses a residential-style door with hinges. Part of what makes the Yukon’s interior so big, of course, are the three slide-outs. When extended, these slide-outs work synergistically with the Yukon’s center console, which consists of a shower on one side, a large four-door pantry on the other, and an optional flat-screen TV and fireplace facing the rear. How all of the moving pieces work together with this console is pretty clever as it helps create separation between the four living areas.

The Host Yukon 11.5 is great for boondocking. Standard features include a 65 gallon fresh water holding tank, a 51 gallon grey water holding tank, and a 31 gallon black water holding tank—the largest holding tanks in the industry—15 gallons of propane, and a vented battery compartment large enough to house two group-31 batteries. Other standards include a Suburban 6-gallon DSI water heater, a Suburban 25,000 BTU propane fired furnace, a Suburban three-burner propane cook top with a folding cook top cover, and a 1,000 watt inverter with two dedicated AC outlets. And like all of Host’s triple-slide models, the basement in the Yukon 11.5 offers unsurpassed storage space for extended trips and full-time living.

All told, the Yukon’s lavish interior, size, and attention to detail are a cut above other makes. The slide-outs, of course, are a large part of what makes the Yukon so special. But what many casual observers don’t realize is that the Yukon’s floor sits above the bed rails of the truck. This creates a floor that is a full 8-feet wide, not 4-feet like in most campers. Couple this 8-foot width with an 11-foot 3-inch floor length, three slide-outs, and the spacious cabover and you’ve got yourself a big camper with about 180 square feet of living space. Indeed, the amount of elbow room, storage space, and amenities found inside the camper are above and beyond what you’ll find in most campers and rival the interiors found in many motorhomes.

“All of our campers have that ‘wow’ factor when you first walk-in,” Pozzi said. “It’s all about the comfortable living space. It really depends on what features you’re looking for and what floor plan you really like. It’s really a personal preference thing. If you want recliners this is the camper you want. And that’s really the main thing. The Mammoth and Yukon are very similar other than how we’ve done the rear slide, so it’s really about the recliners. If you want a recliner, this would be the model for you. It’s become a very popular model because it’s got all the nice features that the Mammoth has. It really comes down to personal preference.”

Of course, all of this size comes with a lot of weight. The dry weight of the Host Yukon 11.5 is 3,955 pounds, meaning the camper will probably weigh a good 5,000 pounds fully loaded. This also means you’ll need one-ton dually at a minimum to safely haul this hotel-on-wheels around, but according to Pozzi some Yukon owners resort to using a better, more capable truck like an F-450/4500 or a F-550/5500.

Like most companies in the RV industry, COVID-19 has had an impact on Host, but not to the extent of other companies. Host took extra precautions from the beginning to minimize impact to the workforce. Social distancing between workers, masks, sanitizing handles and door knobs, and hand-sanitizer are used to mitigate impact. Fortunately, not one Host Camper employee has caught the virus, which is a pretty amazing feat for any company. In fact, Host’s backlog remains at six months, which is pretty close to what the backlog was like before the pandemic struck in March.

So has Host had any trouble sourcing parts during the pandemic like other companies?

“We’ve had a lot of trouble getting parts. The appliances, particularly, have been the biggest issue. It’s caused by a couple of things. If a company gets a rash of COVID they shut the plant down for a couple of weeks, so the supplier gets behind. Another problem is that some of the component parts for these appliances are coming out of China, so if any of them get COVID they shutdown, it all snowballs down the way. Production is also a little bit harder because you can’t put as many people working in a production station as you used to, so that slows down production as well,” Pozzi said.

The COVID-19 pandemic has had a devastating effect on the nation’s economy, but that hasn’t been the case with the RV industry. Customers plagued with cabin fever purchased “COVID campers” in record numbers in 2020 in order to safely vacation and socially distance from others.

“The industry, in general, is insanely busy and everybody has a higher demand than what they can make and so that put the pressure right back on the suppliers to for the RV industry, they have their own supply issues and their customers are wanting more and we’re in the same boat. I think there’s only two Host campers on dealer lots right now. Everything is sold. Right now about 95 percent of my order file is all pre-sold campers,” Pozzi said.

One thing we really like about Host Industries is how it’s always looking for ways to improve its product. These improvements occur not only through customer and dealer feedback, but also through improvements in technology. [read more]

Going lithium is all the rage for those who like to boondock in their RV. Not only does the lithium battery offer a more usable battery capacity at 90 percent (compared to 50 percent for [read more]