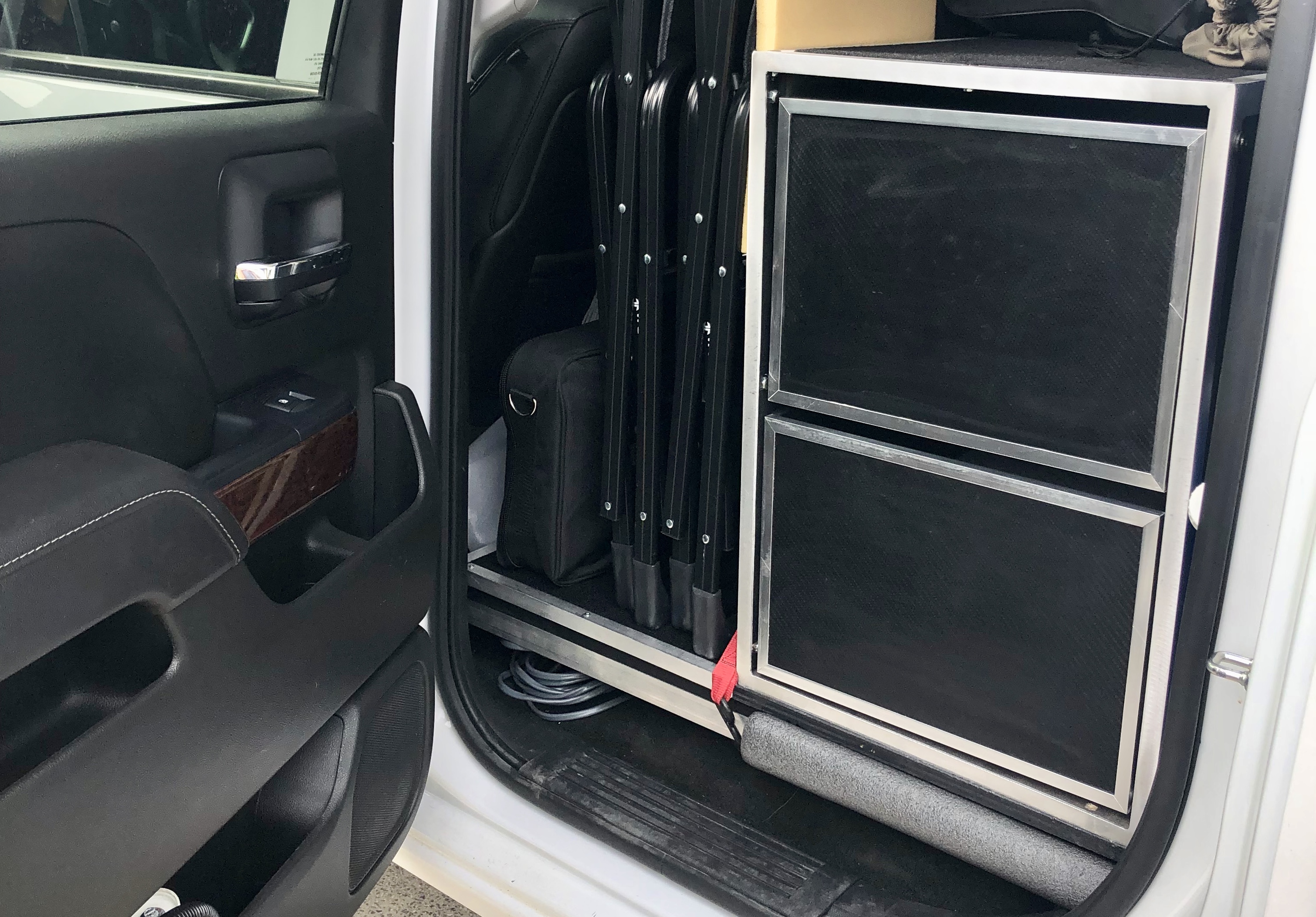 The bane of most truck campers is the lack of storage. While many solutions to solve this vexing problem exist, this backseat drawer system modification, by Jeff Gunn, is one of the best.

On October 7 this year, Truck Camper Adventure published my review of our Outfitter Caribou 6.5 camper. This  camper is mounted on a 2015 GMC Sierra 1500 pickup truck. Visible in that article was a modification I had made to the truck to create additional storage space in what was the back seat area of the truck. In this article, and in response to a few inquiries about it, I will provide some background on the “why” and more detail on the “how” we built this backseat drawer storage system for our truck.

Truck campers, at the best of times, sacrifice storage space for versatility. With pop-up campers (given a lack of hard walls) that storage deficit is magnified. Considering that there would only ever be two of us in the truck, it made sense to remove the rear seat. I used a YouTube video to guide me on our vehicle and in less than an hour it was done. Now we had a lot more space, but practically speaking the part in the middle was pretty inaccessible—clearly a drawer solution was called for. While Jeeps and Land Rovers and all manner of SUV’s have commercially available (albeit rather expensive) drawer solutions, no such option (as far as I could find) existed for “side access” via the rear doors of a crew cab truck. One for our truck camper rig would need to be made.

The first obstacle—and it consumed a lot of time to resolve—was that the rear cab floor of our 2015 GMC Sierra was not “level”. The height of the rear bolts that held down the front seats (being the forward anchor point for our rear cab floor) were not the same height as the as the floor bolts for the rear seats (which, obviously, would form the back anchor points for the rear cab floor). Neither, incidentally, did the various anchor bolts line up perfectly “front to back.” An easily and readily modifiable Land Rover it was not—nothing was “square” or “level” so much time was spent building up the rear corners to keep the cabinet floor flat and welding/ bending 1/8-inch aluminum angle lengths to create a frame for the floor. A good friend, Andy Paterson, built a couple of ingenious “foundation blocks” to level the floor front to back and counter-bored them to allow them to both be secured to the truck floor seat bolts (below) and to the aluminum rails supporting the 5/8-inch plywood floor (above). Foundation in place, a sheet of 5/8-inch plywood was cut, sanded and then stained black before being screwed to the four pieces of aluminum angle that ran front to back in the rear cab area. See images below. 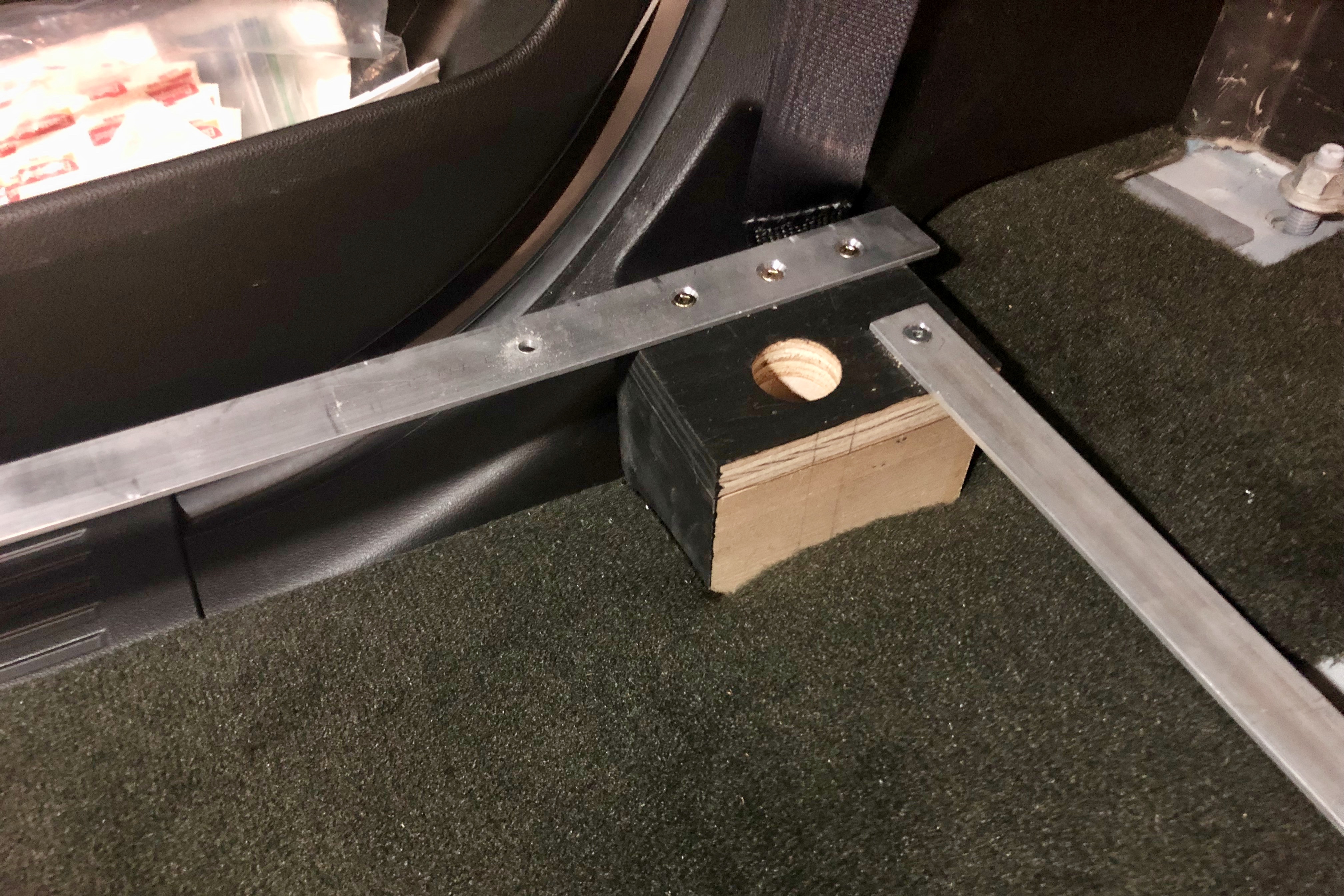 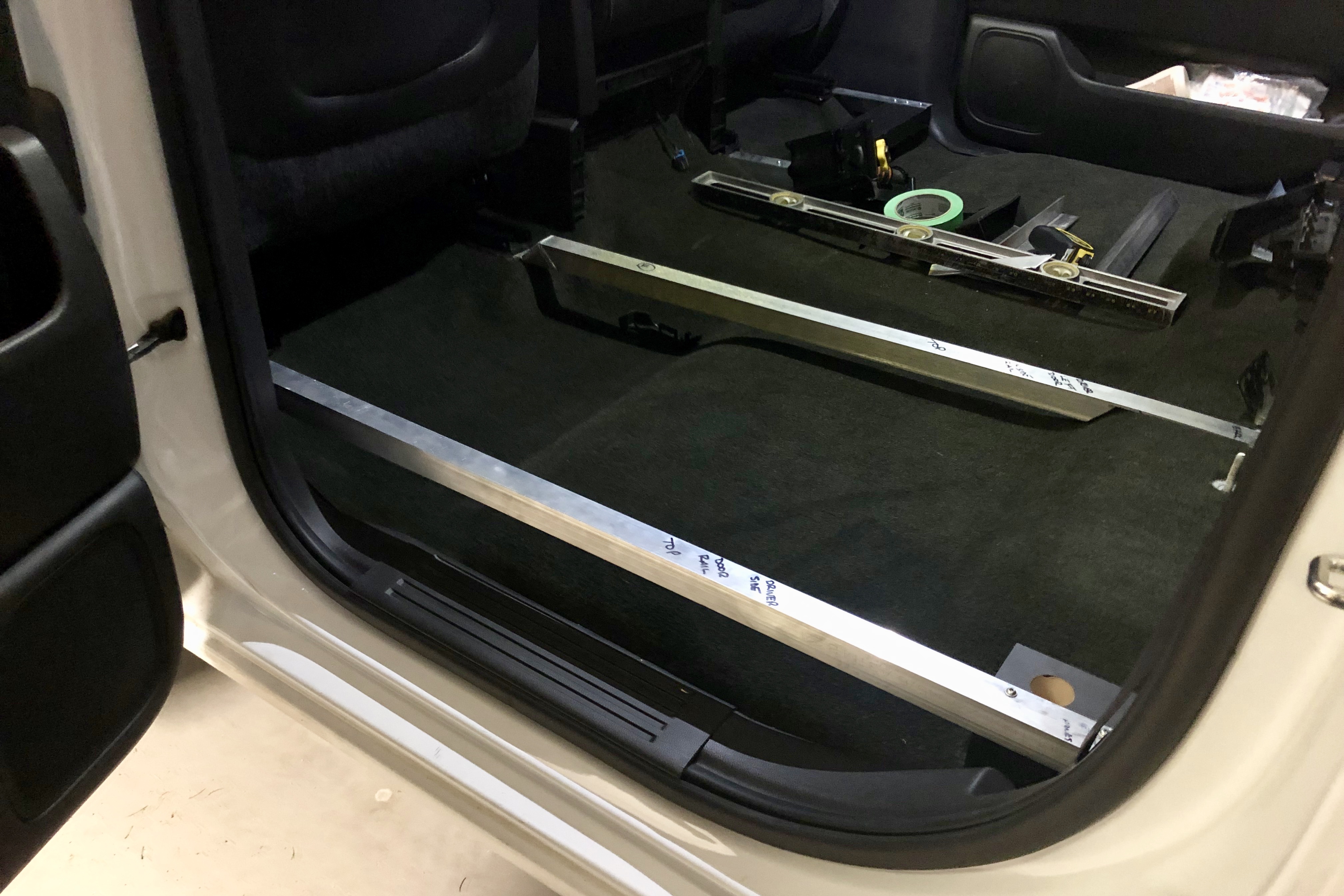 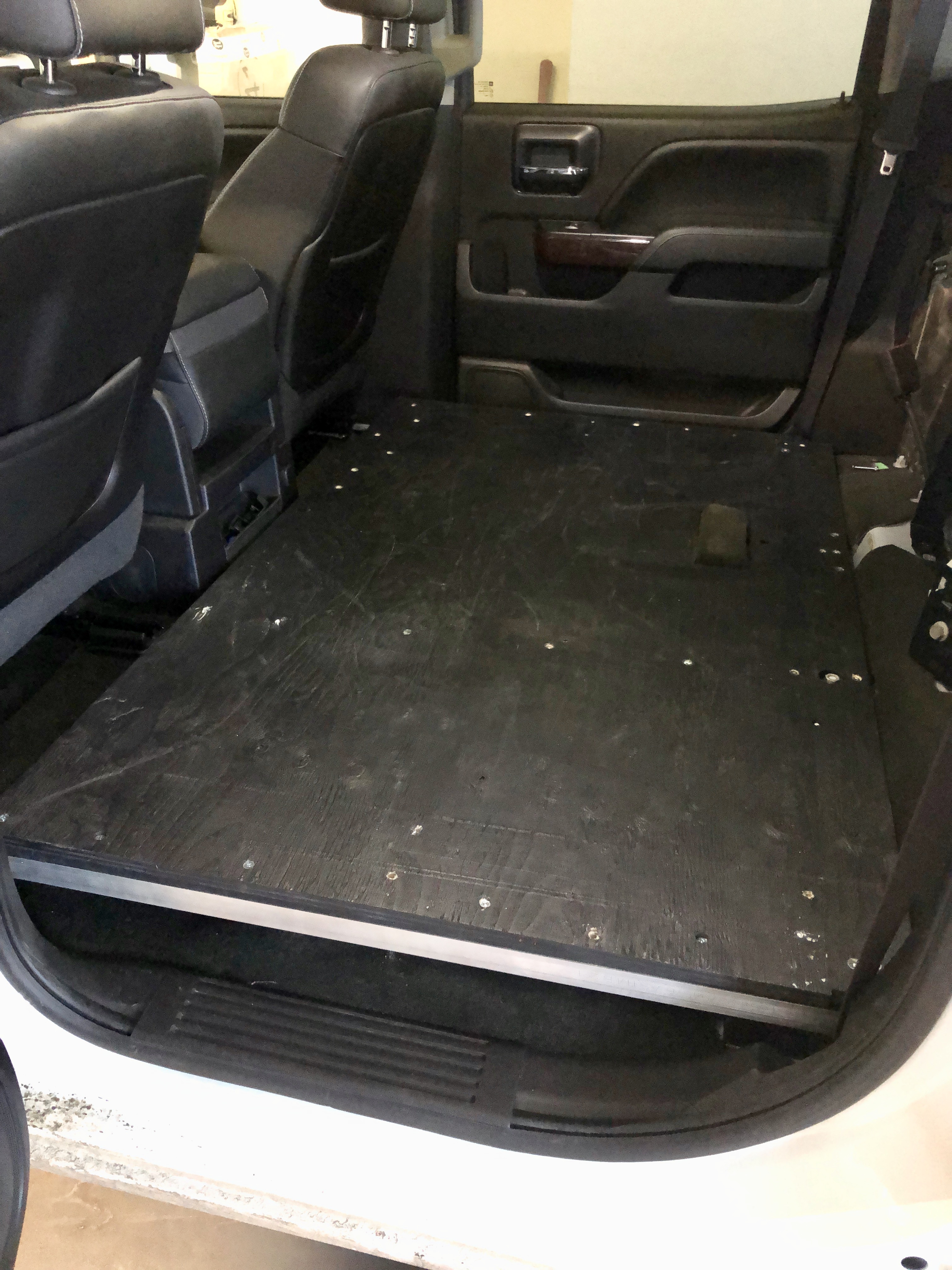 The “foundation” built,  we determined that an aluminum angle “skeleton” would provide the necessary structural rigidity to hold the cabinet walls and drawers firmly in place and anchored to the floor on the many rough roads we would be traveling. I measured the maximum width possible to allow drawers to slide in an out without scraping the rear door frame at the back, or brushing against the rear truck door when fully extended at the front. It gave me a cabinet width of approx 17 inches. Conveniently this left enough space in front of the cabinet for things like our folding chairs, the spare tire, extra coolers, the BBQ, and the like. The approximately 10 inches between the back of the cabinet and the rear wall of the cab lent itself to an ingenious “hanger” system we fabricated to store winter coats, long pants, dresses and the like that we did not access often but needed space to store. The height of the cabinet, at 25 inches, was designed to allow reasonable sized up/down double drawers to be installed on both sides. On the passenger side we lowered the height of the top drawer to create a small panel for a USB port, a 12 volt outlet and two 110 volt outlets which were powered by an 1,800 watt inverter placed on the underside of the cabinet top panel. 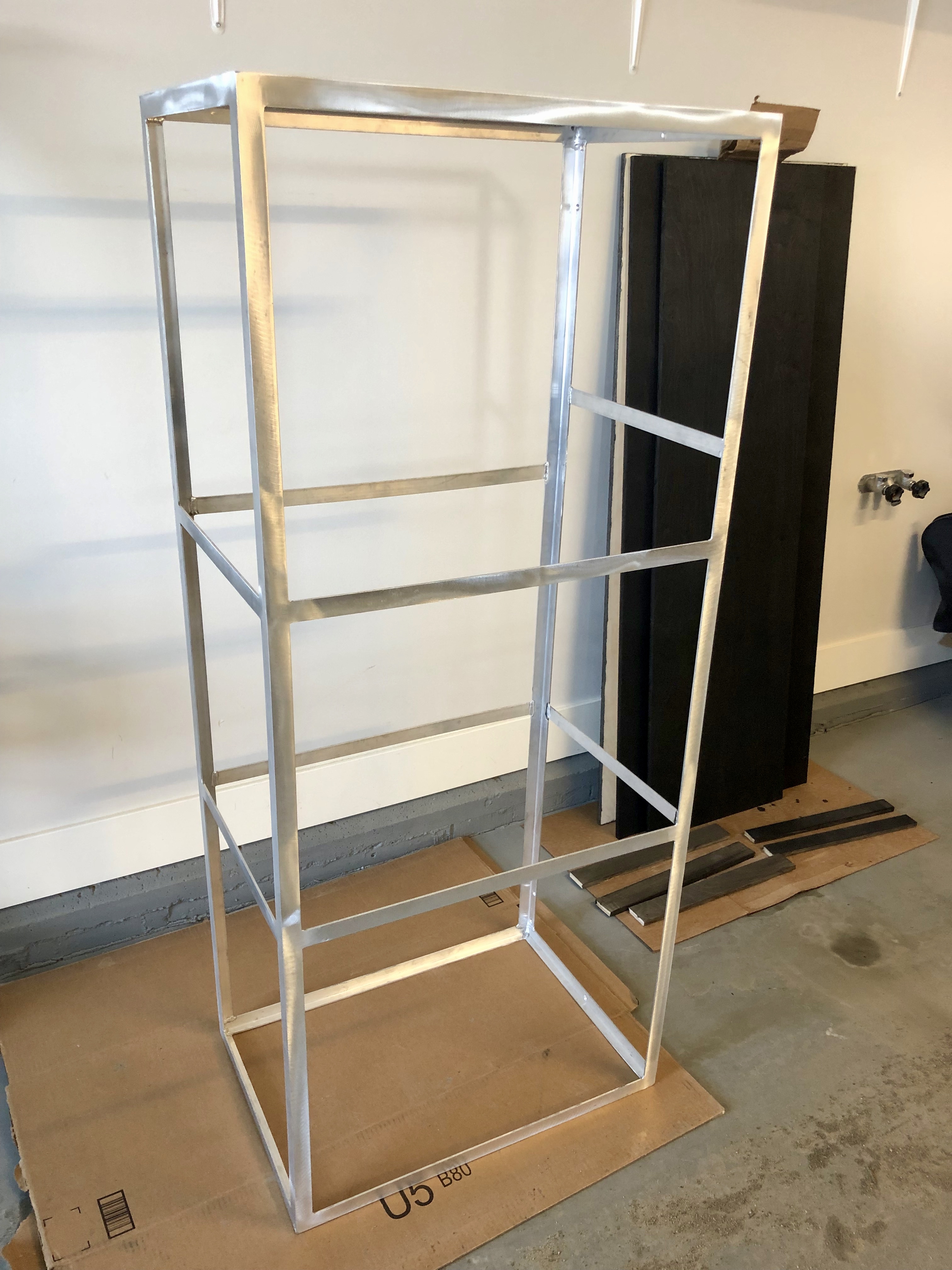 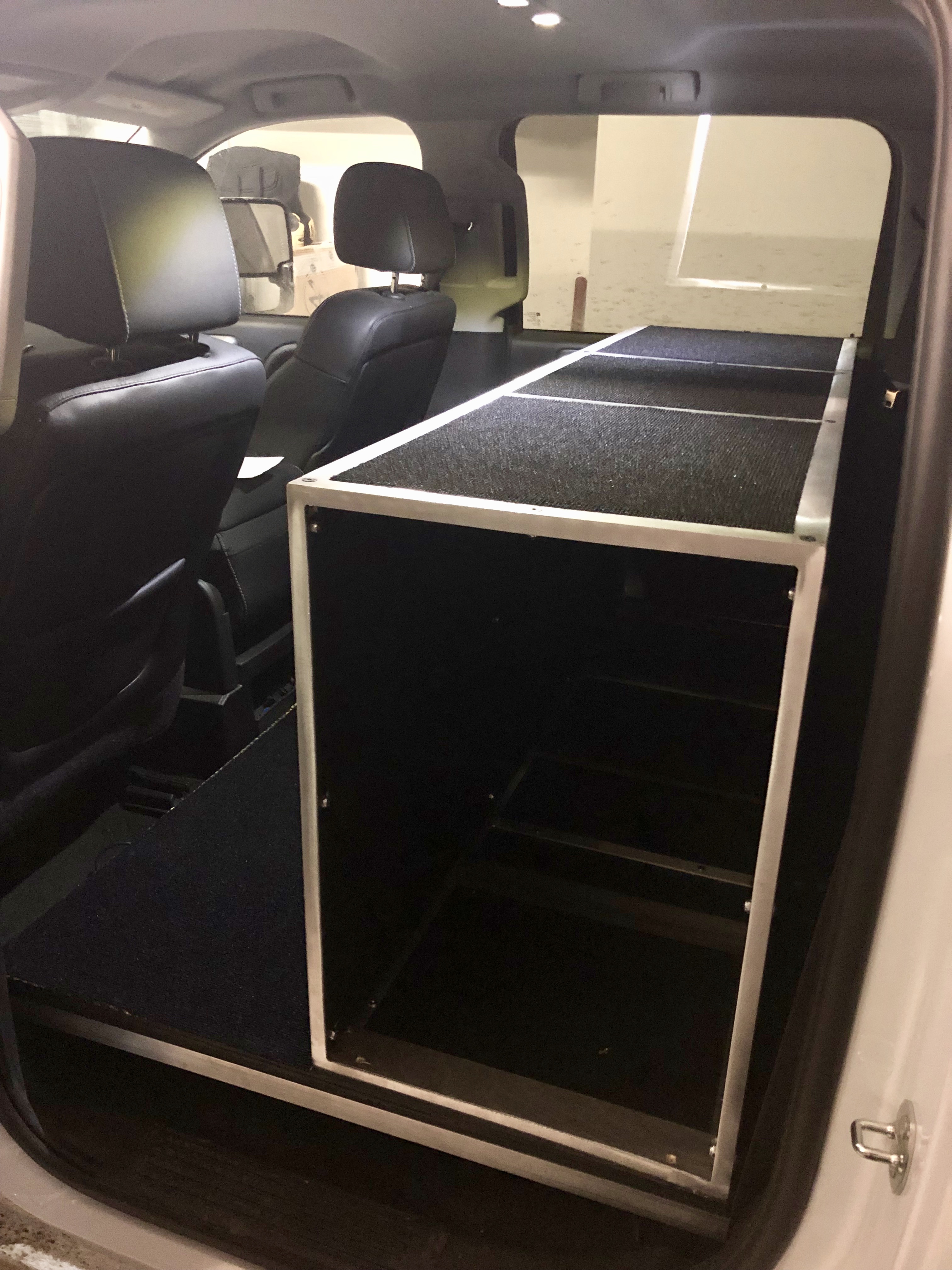 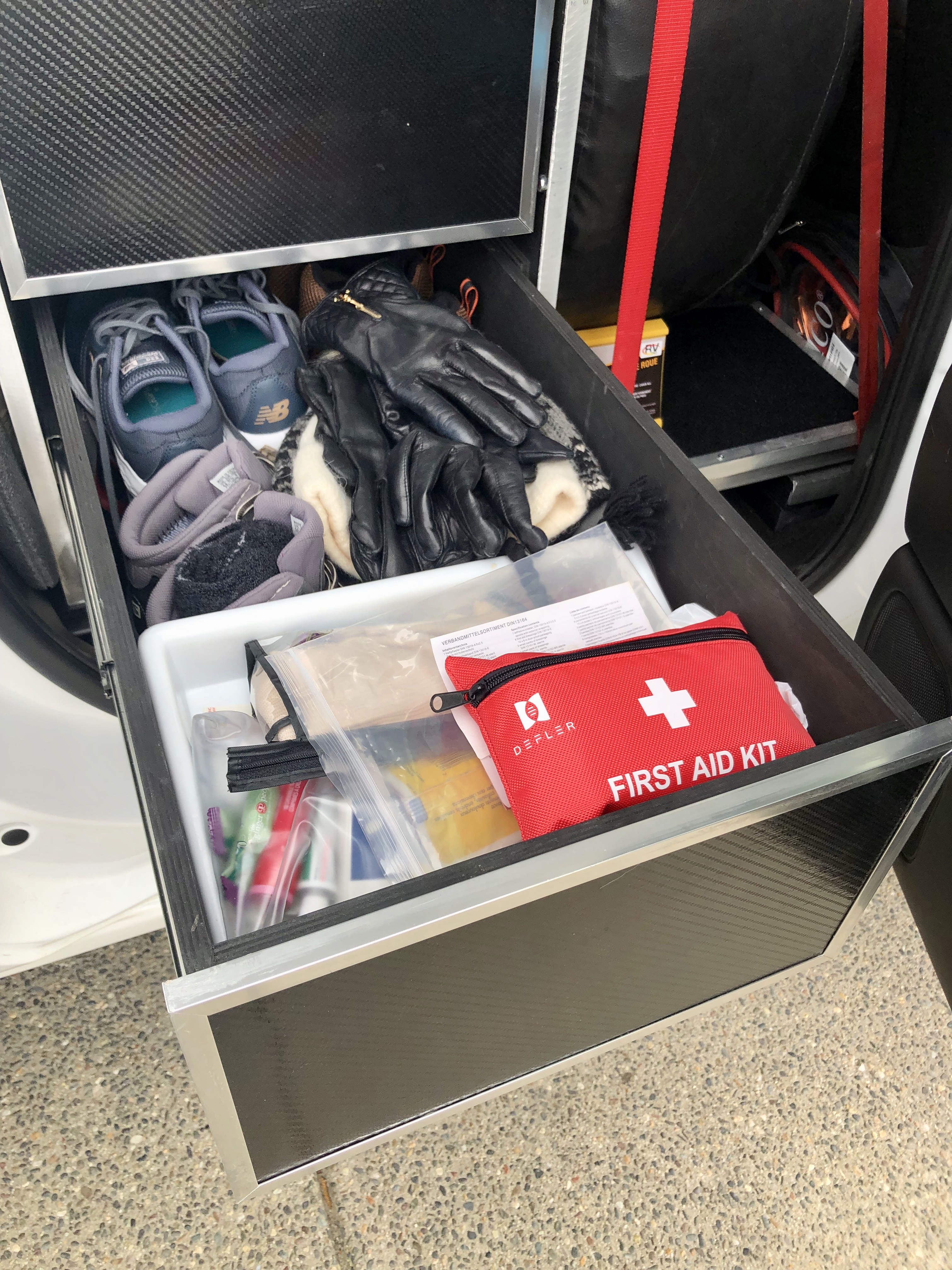 The aluminum skeleton was welded together by Altar Metal Fabrication based on my exact specs using simple lengths of 1/8-inch angle aluminum purchased and pre-cut from our local Metal Supermarket store here in Kelowna. With the skeleton done, I purchased 1/2-inch Baltic Birch sheets (5 feet x 5 feet), had them cut to size and friction fit them to the “ceiling” of the cabinet first, then the front and rear walls. Rather than a whole sheet I used four wood “ribs” on the floor to make a structurally secure rectangle shape but also to minimize weight. These were all screwed into place as well.

Lacking a woodworking shop myself I was helped by my colleague Chris Woods who cut the Baltic Birch and assembled the four drawers to my specs.  Chris also assisted in wiring and installing the Inverter and the various outlets on the passenger side panel and trimmed the drawer ends with thin aluminum angle. Carbon fibre style vinyl was used on the drawer fascia to give a more professional look. Standard 1/2-inch wide, 28 inches long drawer slides were used to mount the drawers into the cabinet. 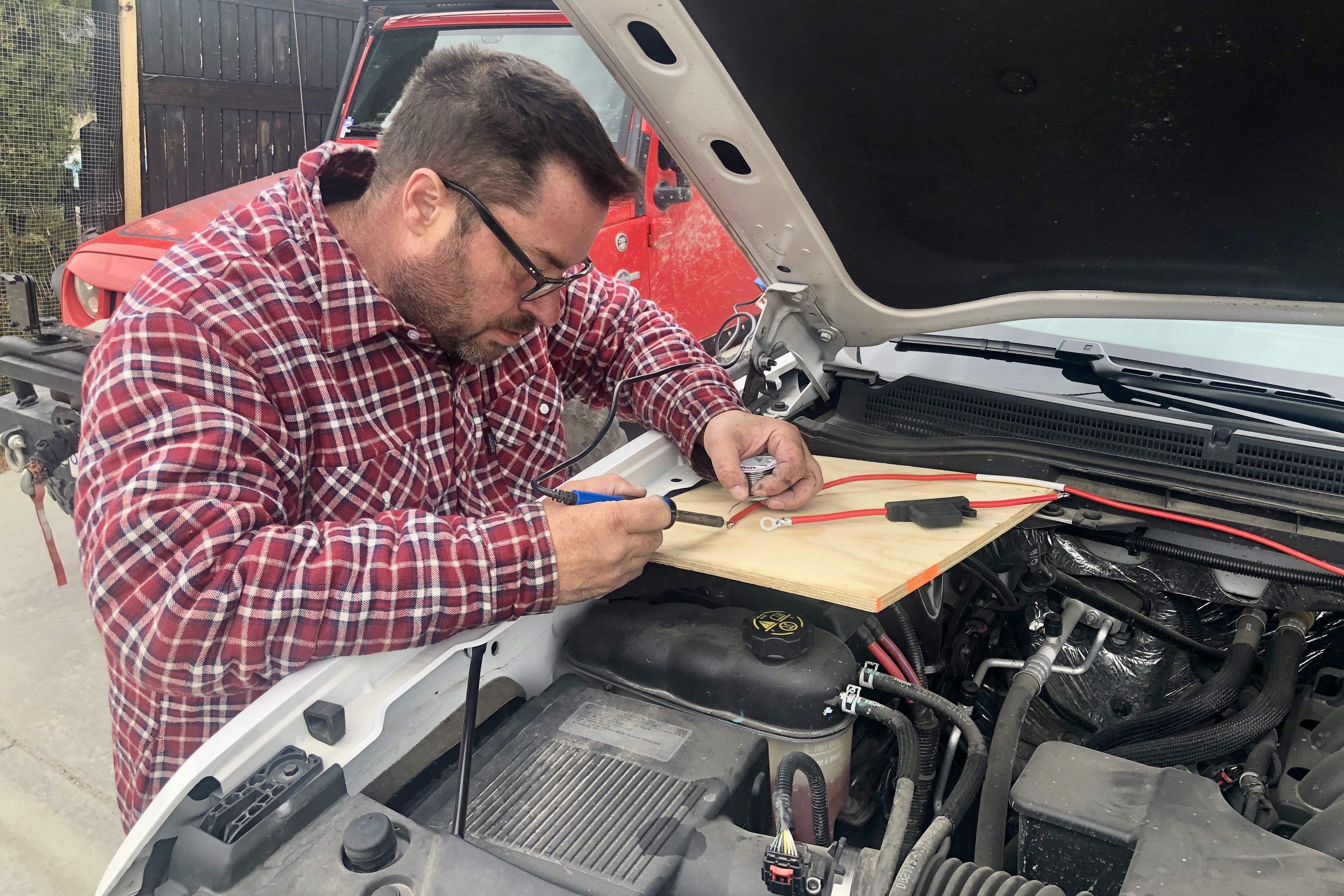 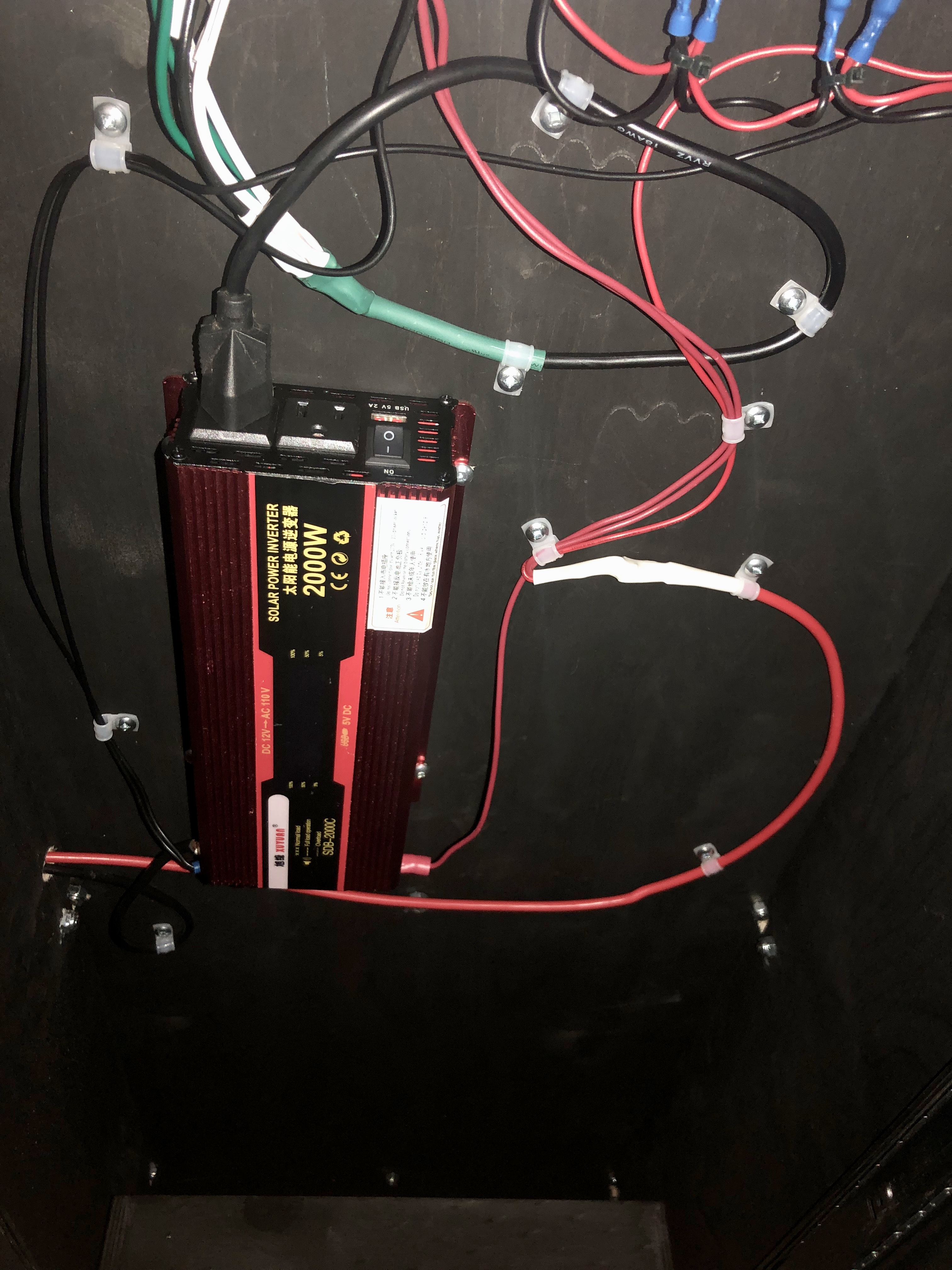 Finally, inexpensive black outdoor style carpet was purchased from End of The Roll to line the outside walls of the cabinet and provide a “factory style” look. We get many compliments on the appearance. 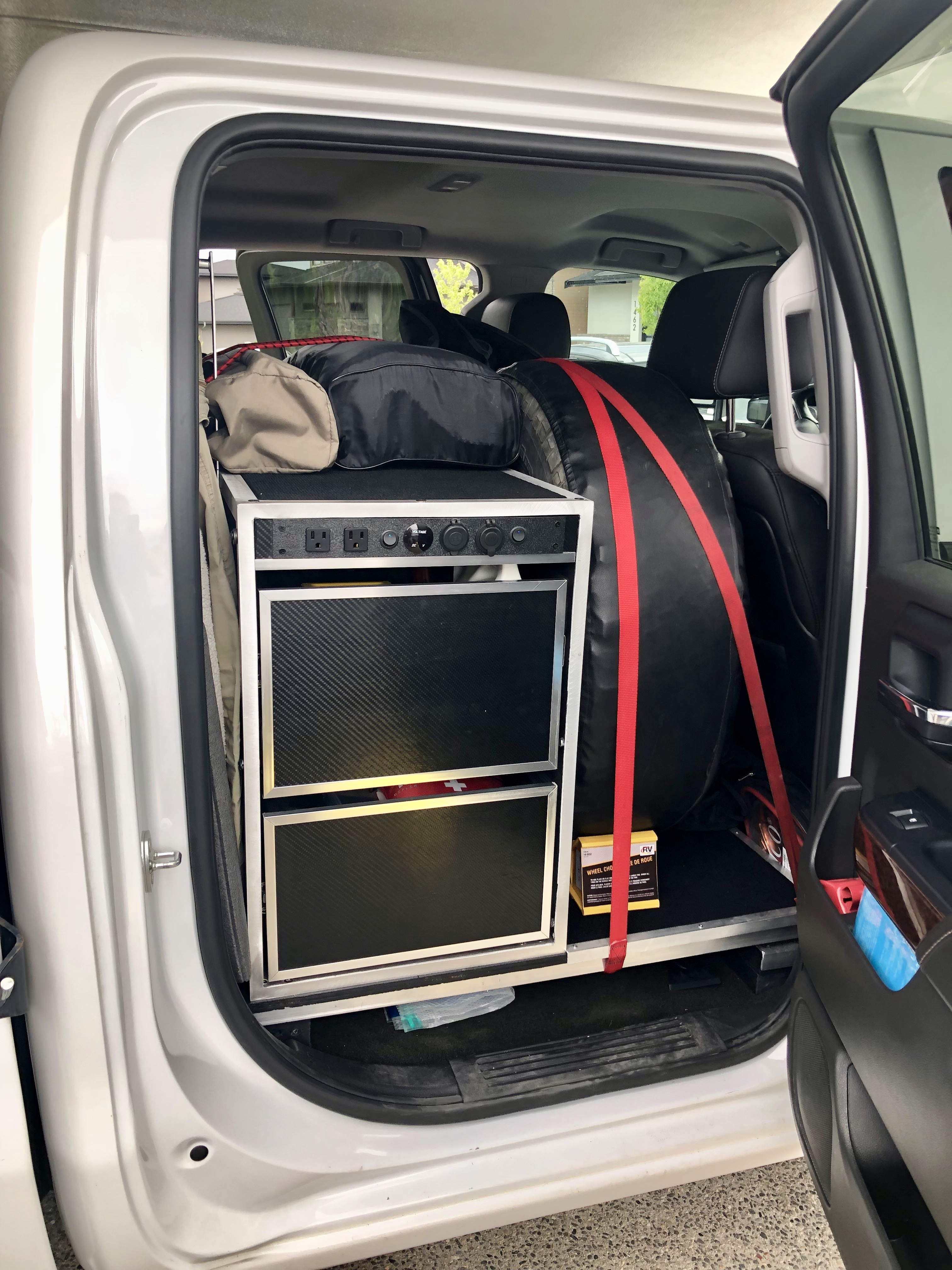 The system works great and all drawers are full—always. All the space is now usable and the top of the cabinet is strong enough to carry our awning, fold up table and assorted other items that we strap to it. The hanger system behind is hugely practical and was made mostly from left over aluminum scraps, welded together by Chris. We love the versatility of the open space in front of the cabinet which we can configure as needed depending on what we carry

The only “con” would be that initially the drawers would slide out when  cornering hard if they were full (and thus heavy). Lockable slides would have resolved this but I did not want the heavier, wider 3/4-inch slides we would have needed to buy to get the lockability feature. Our rough and ready solution was some  “cushioned” door handle stops placed on the drawer fascias and which compress against the truck doors when closed to keep the drawers from sliding out. Functional—yes, pretty—no ! We are currently working on a cleaner locking solution.

The all in cost of material and paid labor for this backseat drawer system truck mod was probably around $800 Canadian ($600 USD) but there are some friendly favors in that total. In terms of weight, the whole system added just a few pounds more than the rear seats it replaced so it was payload neutral. We are very happy with the outcome of our backseat storage cabinet and would highly recommend it to someone who does not need their rear seats but needs additional storage space.

About Jeff Gunn 4 Articles
Jeff Gunn is a retired banker and avid truck camper enthusiast who enjoys exploring with his wife, Lois. The couple recently completed a trip to Alaska and are currently in Mexico with plans to visit South America. The two have put over 12,000 miles on their truck and camper.
Website

In today’s electronic age you can never have enough USB charging ports and electrical outlets in your RV. This is especially true for those of us who work while on the road. My office is [read more]

If you enjoy boondocking for extended periods of time in the sun, it makes a lot of sense to go solar. It’s probably the easiest and best way to keep your truck camper’s batteries charged [read more]

Of all the electronic devices found in today’s RV, few are more essential than the modern inverter. This is especially true for those of us who prefer to camp off-the-grid and still work. My truck [read more]