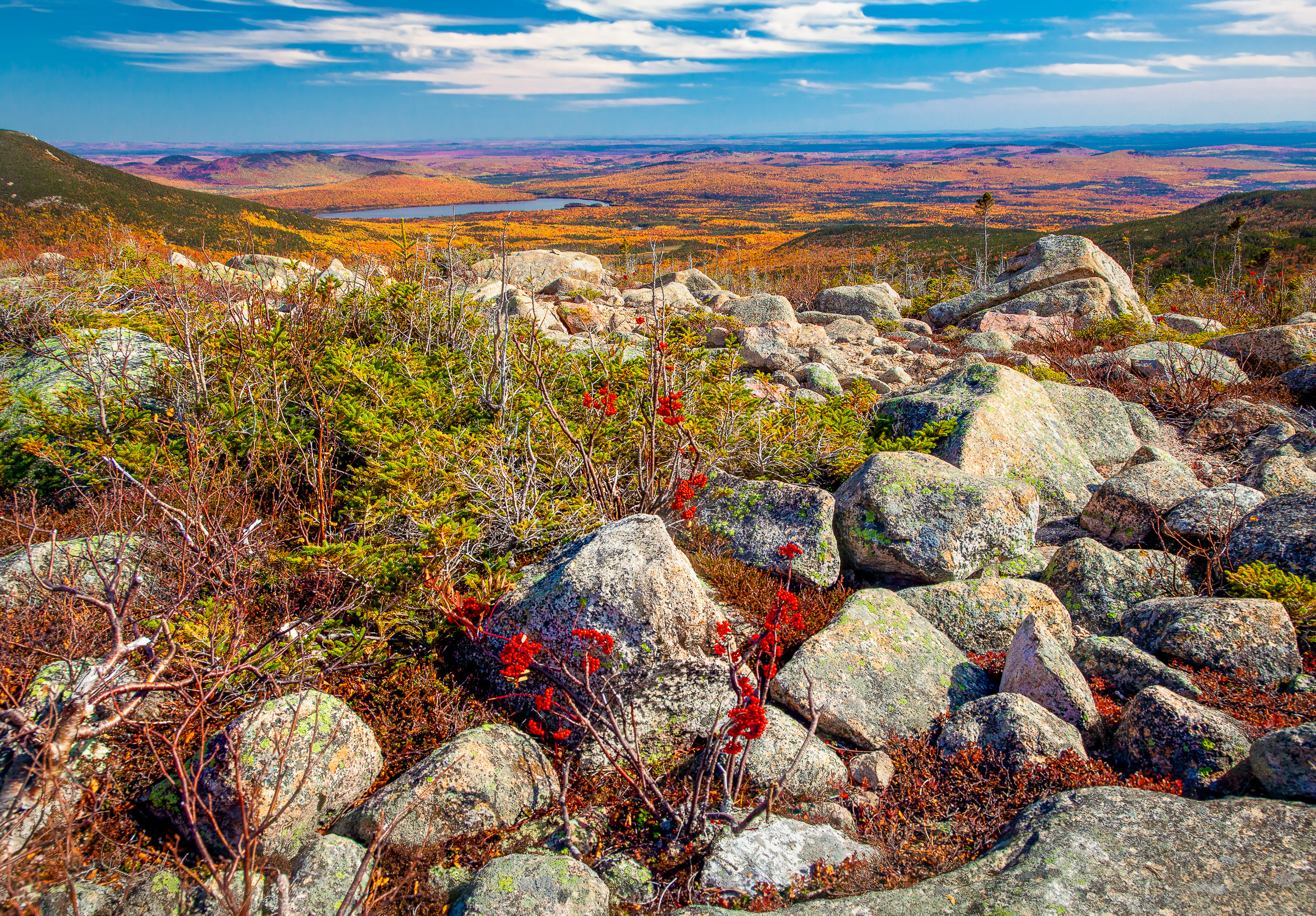 Pull up an online satellite image of Maine at night. Look for the big dark spot in the middle, where no man-made lights shine. Right in the middle of that dark spot is Baxter State Park. Baxter is 215,000 acres of stunning and primitive wilderness, with its lakes, mountains, rivers, dense forests, 215 miles of hiking trails, and 327 campsites distributed between walk-in, backcountry campgrounds, and a few drive-in campgrounds.

Baxter has it all for those willing to forego the distractions of modern luxuries. Lush forests provide abundant easy hikes dotted with lakes and crisscrossed with streams, cascades and waterfalls. There are placid lakes that offer opportunities for quiet canoe trips from your campsite or established spots along hiking trails. The most popular hikes are the multiple challenging routes to the top of the Katahdin Massif, which includes the northern terminus of the Appalachian Trail (AT) and the famous (or infamous if you don’t like heights) “Knife Edge” that connects Baxter and Pamola Peaks. Though these hikes aren’t super long, they are HARD with about 4,000 feet of elevation gain on steep rough trails. The beauty is worth the effort, but know your limits and heed any of the rangers’ specific warnings.

Percival Baxter, a former governor of Maine, was a lover of nature. In 1931 he donated vast tracks of land “for those who love nature and are willing to walk and make an effort to get close to nature,” He mandated the area to remain “forever wild”. Of course, that means Baxter isn’t for everyone. If you are an RV’er and can’t live without your microwave, electric coffee maker and TV, Baxter is not for you. If you can’t imagine a campground without electricity, water and sewer, Baxter is not for you. If, however, you enjoy the natural beauty, stunning views, and the peace of wild forests, Baxter is for you.

Baxter State Park does not allow large RV’s, motorcycles, and generators. It has no running water and no commercial electricity, period. Even the rangers do without, depending on solar for their few safety related necessities. There are very strict vehicle size limits for entrance. You must be less than 7 feet wide, 9 feet high and 22 feet long. The majority of hard-side truck campers will be too big. Most trailers are too big. We got in by the skin of our teeth and we are in a small Phoenix pop-up on a F-350. It felt odd to be the biggest rig in the campground!

All the campsites are on their reservation system. Do NOT come without a reservation if you intend to camp. The majority of sites are hike-in or canoe-in. While it’s completely possible to camp outside the park and drive-in to day hike, you will have to get up early to get the required early start on the harder hikes. Also, there are quotas for day use that quickly fill up. The park provides canoes on many of the lakes; you just have to pick up a key to the padlock from the ranger at one of the campgrounds.

We entered from the southern entrance, Togue Pond Gate, and spent three days at Roaring Creek Campground hiking and looking for moose at Sandy Pond. Sandy Pond is an easy 2-mile out and back hike from the campground with good views of Katahdin and the occasional moose along its shore. We visited it daily, but unfortunately never saw a moose. We attempted climbing Katahdin but changed plans at Chimney Pond about three hours into the hike and made a loop over Blueberry Knoll. Blueberry Knoll has a sweeping panorama to the east. In the peak fall foliage we lucked into, the view was nothing but a blaze of orange out across the eastern plains of Maine and the soaring Katahdin Massif to the west. It was a great place for lunch. The route back down took us pass Basin Lake with another outstanding view of the Katahdin Massif. All in all, it was a rewarding day hike and easier than Katahdin.

We successfully climbed South Mountain from Roaring Creek Campground. South Mountain is easier than Katahdin, but still steep with 1,600 feet of elevation gain, and requires some easy scrambling in the talus field near the top. The 360-degree views at the top are phenomenal and worth the climb.

During our one rainy day of the trip, we drove from Roaring Creek Campground to the Daicey Pond area and did two short easy hikes along the network of trails from our truck camper. This gave us options to dodge rain as needed. The first was to the gorgeous Little and Big Niagara Falls and the second was a loop around Daicey, Grassy and Elbow Ponds with lake views of the distant Katahdin. There is nowhere else we’ve seen so much brilliant green moss. Of course, wildlife abounds, there are apparently more moose here than people—unfortunately, we didn’t see any when we were there.

After three days at Roaring Creek, we moved to South Branch Pond Campground near the northern entrance to the park, Matagamon Gate. There are two routes between the two campgrounds, through the park along the beautiful Park Tote Road, or leave the Park at the Togue Pond Gate and go north along the faster but longer paved route. We chose the faster route so we could stop at the Patten Lumberman’s Museum outside Patten Maine. Maine’s lumber industry played a major role in America’s industrialization and our rise as a maritime power. The museum was excellent. It described the hard and dangerous life of its workers, their role in America’s industrialization, and the subsequent conservation efforts to maintain sustainable forests. Be sure to watch the movie from old archived films.

South Branch Pond Campground is a small drive-in campground along South Branch Pond. It has a mix of well-isolated and highly coveted lake front campsites with lean-tos as well as sites away from the lake, but within an easy stroll to the lake. We immediately rented a canoe and took a trip across the lower of the two South Branch Ponds to catch the fall foliage in the late afternoon sun. There is a short 0.2-mile portage between the two ponds, which provides additional mileage and access to a remote canoe-in campground.

When’s the best time to come to Baxter State Park?  We were there in early October, which is often about a week past peak leaf season. But we lucked out—it didn’t matter where we were hiking—the leaves were amazing. Apparently mid- to late-summer can be quite busy and since they limit the number of visitors, you could be stuck at the gate trying to get in due to daily visitor limits. In early summer you might have to contend with the black flies, but the crowds will be less. If you are planning a trip to Maine, and can’t wait for early Fall, try for that magical and elusive week between black fly season and mosquito season. We did luck out several years ago on a trip to Acadia National Park.

About Dave and Jenney Kiel 2 Articles
Dave is a truck camper enthusiast with a passion for exploring, travel, conservation, and photography. A retired naval officer, he now lives in Washington DC with his wife Jennifer where Dave continues to work for the Navy.

In the Spotlight: The Phoenix Mini-Max Pop-Up Camper

2018 has been a terrific year in truck camper development with several new models being released. Among these are two, groundbreaking pop-ups—the Bundutec Wild and the Phoenix Mini-Max. Not only are both campers equipped with [read more]