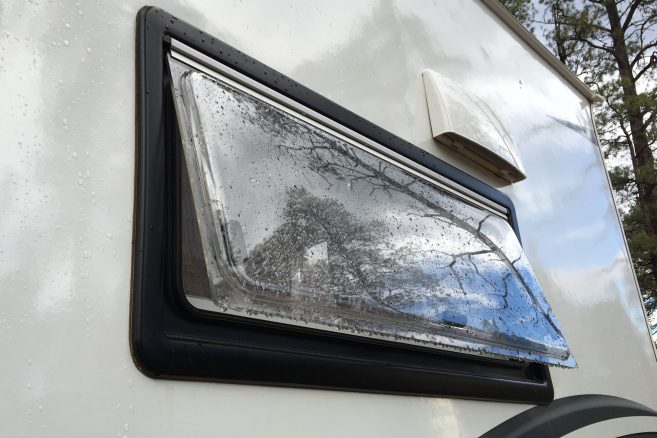 In the past 18 years my wife and I have owned four truck campers, different brands, trading as we became more experienced, wanted features, more room or wore one out. I never thought I’d ever set foot in any type of RV until I was 70+—former dedicated tent camper here—until we did a week-long canoe trip in the Adirondacks and had a very wet and tiring paddle back out. We’d been paddling and tenting for a week in great weather, but everything was dripping wet and suddenly low-30’s from a major storm that blew through our last night, 14 miles and one portage from the take-out. By the time we reached my truck, fiberglass cap not camper on the back, my wife was borderline hypothermic. Gor-Tex notwithstanding, paddling into the wind and horizontal rain for that distance gets one a tad damp. We headed for the campground where we had reservations, only to find—early September—that the showers ran nice and hot at our head levels but not at all so warm any lower down. That shoulder-height wire mesh screening and constant wind likely didn’t help. We slept in the truck cap that night, wet tent left in bag, then departed for a state park where the showers were actually fully enclosed. From there we happily moved on to truck campers—hot water, nice bed, cold adult beverages, dry and hopefully bug-free—and all right at the take-out. Comparative heaven, a full decade or so before my prospective RV ownership timeframe.

In all that time we’ve experienced two types of truck camper windows—the traditional single-pane sliders in our first two campers and the Seitz/Dometic thermopane acrylic models we presently have. Some things they have in common, but otherwise they differ—a lot.

What’s common is that with proper installation—think butyl or perhaps putty tape under the flanges, sufficient clamping to hold in place, and a secondary, external top seal (properly inspected and maintained) with clear silicone or Sikaflex/equivalent—the frames won’t leak and dump water on one’s dinner. Current Seitz windows have an integral triple-fin rubber perimeter seal gasket behind the flange so they can be installed leak-free without tape if you’re not into the belt-and-suspenders scene. Apart from a new, truly large price differential for the Seitz windows what’s otherwise significant is how the windows handle rain, bugs, and condensation.

The slider-style windows we’ve had, whatever brand, all utilized a permanently framed fixed-position screen, good for mosquitoes and larger, although usually not gnats. For ’skeeters and larger, if the screen isn’t ripped, you generally won’t have an insect deluge. Wind doesn’t cause the screen to flex and open gaps—more about that shortly. What will come in, however, is rain—rain or wind pretty much means keeping the window closed and relying on something else—think two weather proof roof vents and a fan— to provide ventilation. We spent a hot, humid, and generally miserable night in Nova Scotia in 2003 learning that lesson in our second camper. We were camped in a field, about 200 yards from a high sea-side cliff, no screening trees or hook-ups, and the tail end of a hurricane blew through overnight. Cyclists and others with tents hauled butt over to the bath house, some taking their tents and/or sleeping bags, other just running. Next morning they all emerged, maybe clean but for sure cranky, to find totally flattened, formerly knee-high grass and remains of tents. For our part, we didn’t—then—have weatherproof vent covers. Next purchase for that camper. We’d just had 80-something temps, same humidity, horizontal rain, high winds to rock us to what passed for sleep, and so no ventilation until we could open things up in the morning. Tough night— but rather better than in a tent.

Our Seitz windows by comparison have handled rain nicely, either at the half-open position or in a real driving deluge at the built-in partial-latch position where the window is only open about a 1/4-inch. You can latch them in this position, regardless of wind or rain direction, turn on your vent fan if that has a weatherproof vent cover, and get some decent ventilation. Works—just don’t forget to latch fully before heading on down the road, else you may end up with your (former) window visible in the rear-view mirror, broken gas pistons swinging in the breeze in the window opening. Not an inexpensive fix—but three layers of box cardboard cut to fit the hole, covered with two layers of poly tarp, all jammed in the opening and held in place by most of a roll of duct tape, should get you to the nearest stocking dealer. He’ll just smile and be happy to help—you might be the second or third fellow that week.

Bugs, however, can be another matter. There are two “buggy” problems. While the Seitz windows have a nice built-in, mosquito-capable, pull-down screen at the top and a pull-up opaque privacy screen on the bottom, neither can be in position while opening or closing the window. Both of those assemblies are built into the window surround, or garnish as it’s called, and can need adjustment. The screws that hold the garnish in place are also all that hold the window itself, assuming no sealing tape was applied during installation. If you remove the garnish to add a bit of teflon lube to the rollers, or perhaps hoping to re-tension, it’s a great idea to have the window itself Gorilla-taped to the outside of the camper, perhaps with a ladder also leaning against it. Else, when the garnish and last screw drops into your hands the window bounces off the pavement. Insult to injury, you’ll then discover, at least on the newer windows, that the two roller assembly ends are plastic-tacked-welded into the garnish so you can’t reset tension like the old-style house window shades. If you happen to be on the road the whole situation can stress-test your emergency preparedness toolkit, ingenuity, and possibly key relationships—especially if rain is in the immediate forecast. I digress…

So, if you’re closing up your windows in a target-rich bug environment—think Alaska with a half-dozen hungry dime-size critters per square inch of screen—you have to unhook the screen, perhaps taking time to drop the privacy panel as well, reach out and bump the window outward off its gas piston stops, swing it closed and latch. Think nice big fan bringing whatever’s outside, inside. I’m here to tell you CAN’T be fast enough. Combat swatting will ensue. When we drove the Alaska Dalton Highway (e.g., the “Haul Road”) in 2014 I really thought twice about opening those windows. Sleeping in a bug shirt can get old quickly—might as well be in a rather less expensive tent.

The second bug issue is the way the screening runs in the window channel. It sits flush against the inside edge, with maybe a quarter-inch overlap each side, held in that position by the those likely-unadjustable top and bottom tension rollers. The screen snaps into the top of the privacy panel to hold it in position, so you can move the whole assembly up or down to adjust the size of the screened opening. I’ve a porch door in my house that basically works the same way—top glass pane that drops, its top edge attached to an integral screen. It has similar bug issues when the wind blows against it and more than half the screen is exposed.

What can happen with the Seitz window, as a sometimes indeterminate function of wind direction, temperature, screen position and maybe humidity—or how many adult beverages you may have consumed before adjusting the screen—is that the screen and/or privacy panel can flutter if wind or a gust happens to be parallel to the side of the camper. That may open a nice gap between it and the window channel, and in worse case blow the screen out of the channel in one or more places. Especially at night, when bugs may cover the screen, swarming there attracted by interior lighting, that flex can be enough to let more than a few inside. If the screen tension is weak, whether from latch wear or if one side perhaps isn’t properly aligned horizontally with the other, you can have the same issue regardless of wind or anything else.

Keeping out the gnat population is another story for both types of camper windows, as neither has come with gnat-proof screening, at least in our campers. What we did for one camper was to sew up gnat screening fabric panels, edges sandwiched between two layers of the soft/loop side of hook and loop fabric tape. The screening is the same stuff used for tents and bug shirts, easily available in rolls. Roof vents with weather covers got a perimeter of an adhesive-backed tape, hook side, in a matching color. Since the loop sides wear out faster than the hooks, that double layer of loop material gives you an easily rolled, stored, and long-lasting screen for those roof vents or maybe smaller side windows you want to use for ventilation. Note, that I’ve not yet received permission to try this potentially unsightly approach on the large sidewall windows of the current camper, but theorize that it should work as well…YMMV. In any case, place one screen panel over the fan vent, sucking air outward, and the other over another weatherproof vent or a perhaps window up in the cabover.

As for condensation, the metal-frame, single pane slider windows we’ve had meant keeping a dedicated sponge handy in all but the summer months. Frost in the winter, maybe a couple of spongefuls of water per window otherwise. The Seitz windows in both of our campers have lived up to their thermopane claim—minimal if any condensation, regardless of season.

Overall, we’ve been happier with the Seitz, noting the issues mentioned. Given a recent price increase of over 100 percent, however, we might look for something else with similar or updated/improved function should we ever purchase another camper. 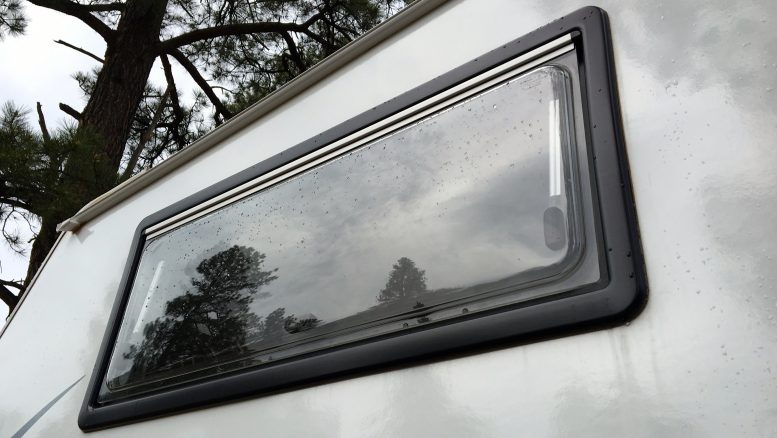