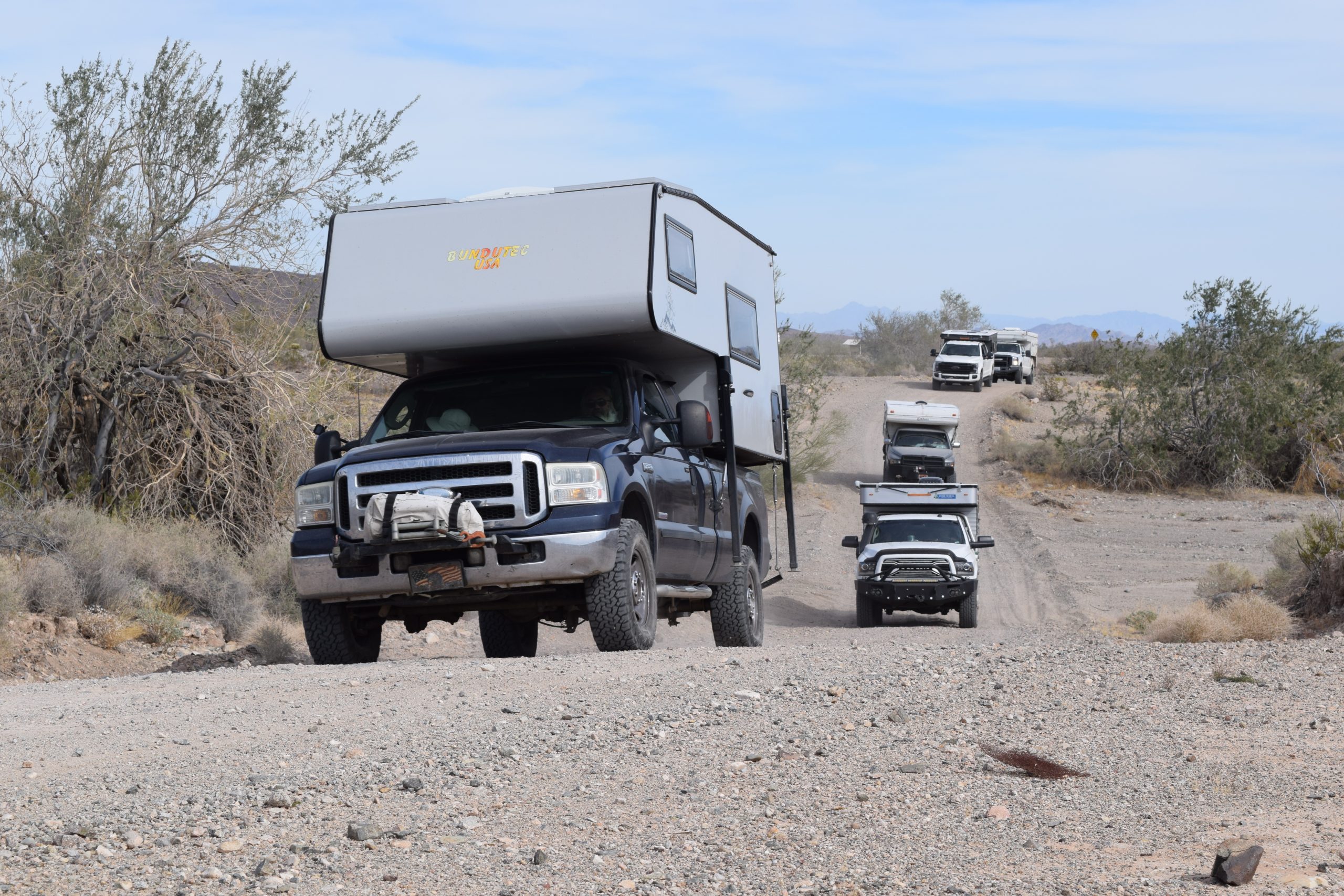 Everybody loves a hot shower. Even more so after a hike in the mountains or after 10 hours of driving in the hot desert. During a recent trip my wife, Julie, said that it would be nice to take a shower, but doing so would use too much of our limited water. This has been an ongoing discussion between the two of us, and after several years, it was time to finally do something about it. The question was how to do it with only a 20-gallon freshwater holding tank like the one found in our truck camper? How do we take a shower without using up a good portion of our limited water supply?

The idea of an RV recirculating shower was the ticket to achieve said goal. Fortunately, YouTube was a big help. There are loads of videos by those who have tackled this project previously. However, the videos I watched were by owners of RV motorhomes, vans, and trailers with plenty of space for all of the needed plumbing and equipment; none were installed in the limited space of a slide-in truck camper like my Bundutec BunduVry.

A lot of trial and error was involved in the final design. Unlike some water recirculation systems that were designed for portability, the system I designed was incorporated into the plumbing system of my camper. Fortunately, there is a small storage cabinet underneath our wet-bath, but as you can see in the photographs, the size of this storage space is very limited, great for shoes and other small items and that’s about it. As a result, the limited space forced me to “go small” with my choice of equipment and parts. There may be additional changes in the future, but for now, the system is adequate for our needs.

Before installing the system, it’s a good idea to bench test everything first. For this testing, I used the kitchen sink in my camper as a substitute shower basin. Everything worked fine using cold water. However, I noticed that the returning water still had dissolved soap in it that wasn’t being filtered out. Further research showed I would need a much more elaborate filtering system that my camper didn’t have room for. Fortunately, I found a simple work-around to this problem—a no-rinse body wash and shampoo called Aloe Vesta. A quick test using this product resulted in no soap or shampoo residue in the filtered water.

How much amperage did the water recirculation system consume during testing? I noted that the heater, which is adjustable by the way, can pull up to 15 amps DC and the water pump up to 8 amps DC. What I typically see is a consumption of about 18 amps (15 amps heater plus 3 amps pump).

With the design work and delivery system completed, it was time to modify the return drainage under the shower basin. The tiny compartment under the basin was indeed tight and would require me to literally lay down on the job in order to get the job done right. This is because the existing drainage system runs diagonal and would have to be engineered as far as possible along the back wall to make room for the shower delivery system. A test run after the installation was finished revealed no leaks. 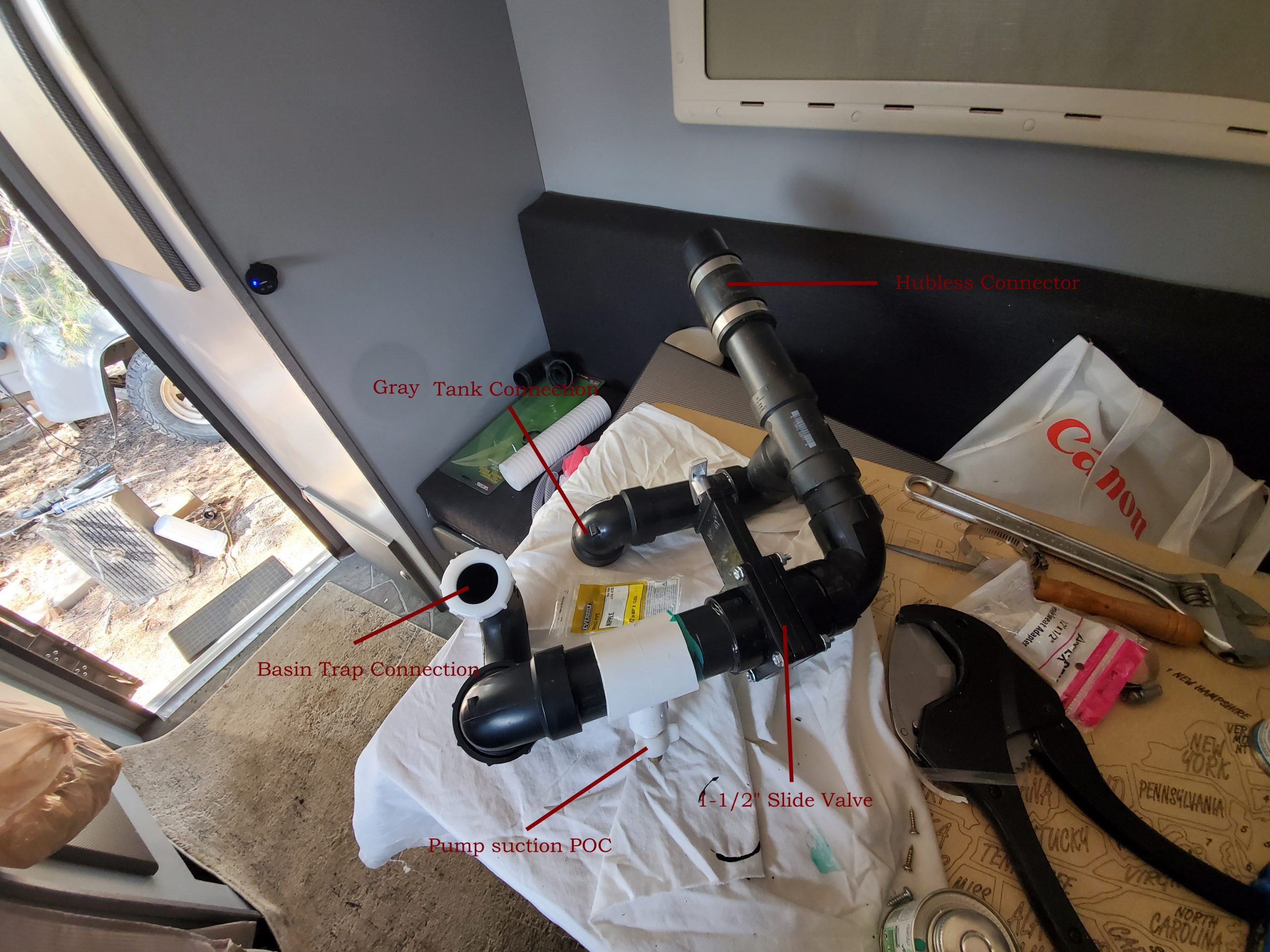 Modified drainage with a 1-1/2 inch slide stops to isolate part of the system.Getting the new drainage system in place (pictured below) took a bit of twisting and pushing. In the photo, you can see where the brass suction fitting for the pump is located (white T-fitting).

Next, I worked the pump and filtering system into the small narrow space under the shower basin and installed all of the plumbing. While showing my brother, Howard, the installed system, he exclaimed, “you got all that in that small space?” Yes, I did as you can see in the photo below.

Next, it was time to install the 12-volt wiring to control the portable water heater and pump. The plan, originally, was to wire the two devices to the DC fuse panel using existing wire runs, but I quickly discovered that the gauge of wire was too small for the portable water heater’s amp draw. As a result, I ended up going with inline fuses and wired everything directly to the main battery posts using rocker switches that are mounted in the kitchen. These two switches are labeled using a special label plate made locally (see photograph). Please see the video below for the rest of the story of the electrical setup.

After all of this work, it was time to take a real shower using the completed system. The results were excellent. Using the Aloe Vesta, the two of us used only 7 quarts of water. The heater kept the pre-heated water warm enough for a very satisfying shower. Better yet, the water was clean enough to use a second time. As you can see, using only 1-3/4 gallons of water for two people barely puts a dent in our 20-gallon water supply.

Did we learn anything during the real-life test? We did. We learned that one has to keep a little flow of water going through the shower head at all times. If the water flow is stopped inside the heater, the water will get too hot and result in an unpleasant surprise when the water is turned on again. Letting the water drip would normally be an issue, but not for this system because the water is recirculated.

Building this water recirculation system was both rewarding and fun. Yes, there were some challenges along the way with the size and space restrictions, and it was not an inexpensive project—about $250 for everything—but I learned a lot, used problem-solving skills to come up with solutions, and ended up with a very useful system for our camper. More importantly, the wife is happy now that we can take showers regularly while we boondock. As they say, “happy wife, happy life!”

The state of Utah is renowned for its state and national parks that feature incredible landscapes not seen anywhere else on earth. Among the best of these has to be Kodachrome Basin State Park. First [read more]

Exploring Utah’s Valley of the Gods