One of our favorite summertime locations in the great state of Arizona is the Rim Lakes Recreation Area in the Sitgreaves National Forest. Perched atop the Mogollon Rim at an elevation of 7,700 ft and located just two hours by car from Mesa, AZ, the recreational area is a great location where you can “beat the heat” and take part in a host of low-cost recreational activities that everyone in the family can enjoy.

Getting to the Rim Lakes Recreation Area from Phoenix is easy and takes only a couple hours. From Mesa take the Beeline Highway (AZ-87) northeast for 76 miles to Payson until you reach the AZ-260. Take the AZ-260 east for 30 miles to Rim Rd located just as you reach the top of the Mogollon Rim. Turn west on Rim Rd (Forest Road-300) and drive a short distance until you reach the entrance to the recreational area. Unlike most forest roads, you’ll find that the first five miles of FR-300 is paved, though portions of the road are a bit uneven and bouncy in places. The speed limit on FR-300 is 35 MPH.

In case you’re not familiar with the geological feature, the Mogollon (pronounced muggy-own) Rim is a massive escarpment marking the southwestern edge of the Colorado Plateau. It’s named after Don Juan Ignacio Flores Mogollon, the Spanish governor of New Mexico from 1712 to 1715. The escarpment rises up to 7,700 feet in some locations with much of the land south of the rim lying around 4000 and 5000 feet. The rim was formed by erosion and faulting and is comprised mostly of limestone and sandstone. A few large canyons have been carved into the feature with the most notable being Fossil Creek Canyon and Pine Canyon. As you might expect, the rim forms a natural boundary for plant species. Those found on the rim match the species found in the Rocky Mountains while those found southward match the species found in the Mexican Sierra Madre.

The Rims Lakes area is beautifully situated near the southern edge of the Mogollon Rim. It’s covered with thick forests of Douglas-fir and Ponderosa pine and features three man-made lakes–Woods Canyon, Willow Creek, and Bear Canyon. Although modest in size, the lakes provide much of the area’s appeal. All three are open to boating, swimming, and fishing. Each lake has its pros and cons though Bear Canyon is, by far, the least accessible and requires a steep hike from the parking and camping areas to reach it. Of the three, Woods Canyon is the most popular and can get quite busy during the summer, especially on weekends. A well-stocked general store and boat rentals are available at Woods Canyon Lake. 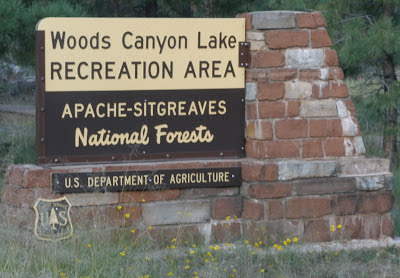 Stocked weekly by the Arizona Fish and Game Department, Woods Canyon Lake offers plenty of opportunities for anglers to catch the “big one.” With a surface area of about 53 acres, the lake has an average depth of 25 feet and a maximum depth of around 40 feet. Rainbow, brown and cutthroat trout can be successfully caught from either shore or boat. Power Bait or worms work great from the shoreline, while those with a boat find success trolling with black “Rooster Tails,” and Kastmaster spoons. During hot summer temperatures anglers should fish a little deeper, but no more than 20 feet, because there is little to no oxygen at the bottom. A state fishing license with a trout stamp is required for fisherman 14 years-old and up. The catch limit is six trout for licensed adults and three for unlicensed children under 14. Only electric trolling motors are allowed on the lake.

The Rim Lakes area offers four campgrounds of various size. All are in proximity to Woods Canyon Lake with Spillway Campground the closest. Spillway consists of 26 camp sites, each accommodating trailers up to 16 feet long. Aspen Campground, comprised of 136 sites, is the largest and can take trailers up to 32 feet long. Mogollon Campground, located on FR-300, offers 26 sites each which can accommodate trailers up to 32 feet long. Crook Campground is a group camping area, consisting of two loops, and a total of 26 sites. Each campground offers water spigots, picnic tables, restrooms, and fire rings. Campground fees are $16 a night. A single dump station for the entire recreation area is located on FR-105 a mile south of the lake. Fees are $5 to dump your waste tanks and $2 to dump your trash. Reservations can be made at each campground except for the Mogollon Campground, which is first come, first served.

If you prefer boondocking to campgrounds, you’re in luck. Numerous forest roads can be found throughout the Rim Lakes area where you can set up camp. Most of these roads lead to primitive campsites that can be clearly seen from the road. Most sites are identified with a marker that requires RVs to be parked within 50 feet, but some of the more remote roads and sites have a 300 feet restriction from the main road. Clearly marked signs will identify which rule applies. All sites have primitive fire rings made of rock and some even offer picnic tables. However, you should be warned. Some of the forest roads in the area are very rough and some can become flooded and muddy from the seasonal monsoons which hit from July to early September. Some of the most popular boondocking locations can be found on FR-89, FR-84, and FR-195. Click here to view a map of all the forest roads found in the Rim Lakes Recreation Area.

The Rim Lakes offers several first-class hiking trails. Perhaps the most popular is the 3.5 mile long Rim Lake Vista Trail (Trail 622). This footpath offers expansive, jaw-dropping views of the area south of the Rim as well as excellent opportunities for wildflower viewing (due to the summer monsoons, the best time to view wildflowers is in July and August, though you’ll be able to view wildflowers anytime between late May and early October). I also recommend the Woods Canyon Lake Trail, which circles the lake, and the Carr Lake Trail System. The latter is a favorite for horseback riding; plentiful parking for horse trailers can be found at the trail head on FR-9350.

Wildlife is plentiful on the Mogollon Rim. Everything from mountain lions, black bear, elk, deer, and antelope to bighorn sheep, wild turkeys, bald eagles, and red-tailed hawks make their home there. Elk and deer can often be seen in campgrounds and crossing the street so be mindful of them and watch your speed. Bald eagles are often seen perched in trees near Wood Canyon Lake. We viewed two during a recent visit in early August. Protected species that inhabit Rim country include the bald eagle, the Mexican wolf, the Mexican spotted owl, the Apache trout, and the southwestern willow flycatcher.

While the Rim Lakes offer spectacular beauty, there are some dangers of which to be aware. Black bears are prevalent on the Rim and a few attacks on unwary tent campers have recently occurred in the area. Use common sense when camping and don’t leave meat and garbage out that can attract bears and other wildlife. Lightning is also prevalent on the Rim, so boaters should avoid the lakes when summer monsoons approach. And if you have pets and need to leave them at your campsite, keep them inside your RV. Otherwise, they might fall prey to a prowling coyote or cougar.

When is the best time to camp and fish at the Rim Lakes? Due to the crowds, weekdays are far and away the best. If you’re planning a weekend visit, it’s best to leave Thursday or Friday in order to beat the rush for a decent campsite. Boat traffic on Woods Canyon Lake is pretty busy on weekends, too. As a result, the best days for fishing are on weekdays. As for the time of year, the summer months are generally the busiest, so if you want to avoid the crowds, visits in May, early June, and September would be better. The recreation area is open from mid-May through mid-October.

So if you’re in Arizona or Western New Mexico and you’re looking for a camping and fishing getaway where you can “beat the heat” of summer, the Rim Lakes Recreation Area is for you. Better yet, you don’t have to drive to Colorado or Oregon to enjoy cool mountain lakes surrounded by thick forests of pines. Whether you stay for a full week or just a weekend, the Rim Lakes area of the Sitgreaves National Forest will be sure to reinvigorate your spirit so that you’ll want to come back again and again.

Like Loading...
About Mello Mike 742 Articles
Mello Mike is an Arizona native, author, and the founder of Truck Camper Adventure. He's been RV'ing since 2002, is a certified RVIA Level 1 RV Technician, and has restored several Airstream travel trailers. A communications expert and licensed ham radio operator, he retired from the U.S. Navy in 2004 as a CWO3 after 24 years, worked in project management, and now runs Truck Camper Adventure full-time. He also does some RV consulting, repairs, and inspections on the side. He currently rolls in a 4WD Ram 3500 outfitted with a SherpTek truck bed with a Bundutec Roadrunner mounted on top. - KK7TCA
Website Instagram YouTube

A couple weeks ago the family and some friends got together for a weekend camp out on Mt. Graham to celebrate the end of another year of college. This was our second time on Mt. [read more]

Quartzsite, Arizona is probably unlike any other place on earth. During the summer months, the sleepy, little desert town looks like hundreds of others you may encounter in the desert Southwest. However, a complete transformation [read more]

The Apache Trail, located in the heart of central Arizona, is known for its breathtaking beauty, but for those who enjoy outdoor recreation like boating, fishing, and hiking, it’s also a first-rate attraction. Located within [read more]