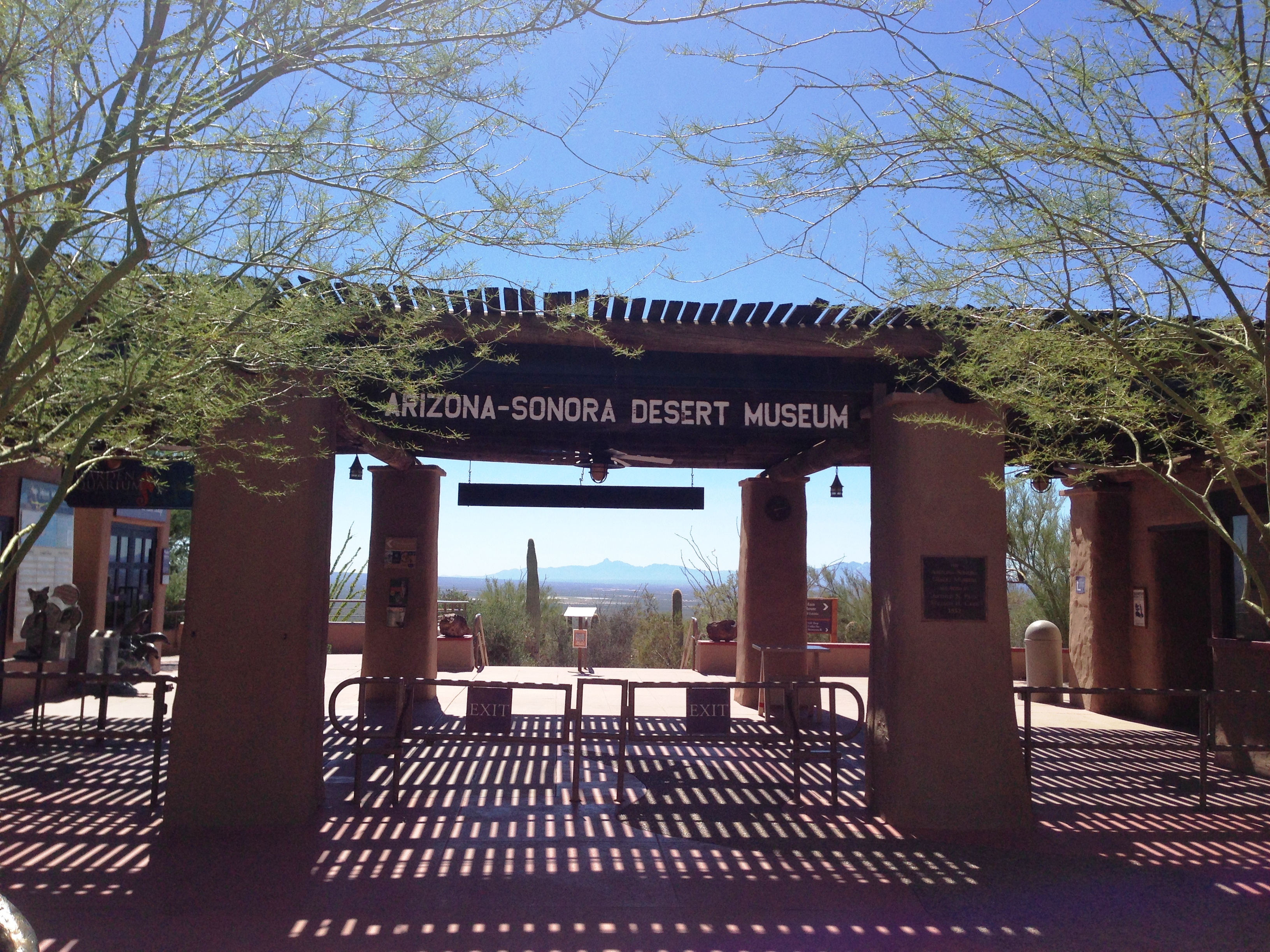 One of my fondest memories of growing up in Tucson, Arizona was a field-trip I took in the second grade to the Arizona-Sonora Desert Museum. What? A museum as one of your favorite childhood memories, Mike? Yep! Don’t let the name fool you. The place is much, much more than just a museum. It’s also a world-renowned zoo, a natural history museum, and a botanical garden, all rolled into one. Indeed, the Desert Museum has earned a well-deserved reputation in the scientific community as an institution devoted to researching and protecting the land, plants, and animals of the Sonoran Desert.

The Desert Museum is, without a doubt, one of Tucson’s largest tourist attractions. It draws 2,500 visitors a day during spring months, and 460,000 visitors a year. At an elevation of 2,840 feet, temperatures routinely hit the 100s during the summer months, so the best time to visit is in the fall, winter, and spring. Fortunately, the museum also provides evening hours in the summer after dark when temperatures are much cooler. From September to May admission is $14.50 for adults and $4.50 for children and from June to August, $12.00 for adults and $3.00 for kids.

The grounds of the Desert Museum are pretty impressive. Nearly two miles of foot paths and exhibits recreate the diverse and natural landscape of the Sonoran Desert where you’ll find more than 300 animal species and 1,200 kinds of plants. All of the indigenous plants, animals, and fish of the region can be found here. In it you’ll see the mountain lion, the javelina, the hummingbird and the tarantula as well as the prairie dog, the black bear, the Gila monster, and the rattlesnake. Of course, no Sonoran Desert lineup would be complete without the most famous duo of the region the roadrunner and his arch-nemesis, the coyote.

If you have any qualms about visiting animals in captivity, you really shouldn’t. Most of the animals featured at the Desert Museum are rescues that have been rehabilitated and can’t be released into the wild. In other words, these animals would have probably died on their own and now enjoy a carefree life in a realistic setting where they can live out their lives in dignity. It’s a win-win situation. A win for the animals and a win for us, the viewing public.

The museum grounds consist of several exhibit areas, with each offering a unique theme. These include the Sonoran Cave, Mountain Woodland, and Desert Grassland exhibits and the Desert Loop Trail and the Riparian Corridor. One little-known fact is that the Desert Museum pioneered the creation of natural animal habitats that all zoos worldwide now employ. For botanical enthusiasts, spectacular desert fauna can be viewed at the Cactus Gardens, Pollination Gardens, and Desert Garden exhibit areas. As a bird lover, my personal favorites were the two aviaries–the Hummingbird Aviary and the Walk-In Aviary–the latter which allows you to get up close with nearly 40 species of birds, including the cactus wren, Gila woodpecker, gamble quail and the roadrunner.

Since the museum grounds are pretty extensive with about 85 percent located outdoors, you’ll need a good pair of walking shoes, sunscreen (dispensers can be found in all bathrooms), and a hat. Visitors should set aside at least three hours in order to see everything, but don’t be surprised if you end up staying much longer. Two cafeterias are also on the grounds in case hunger hits during your visit. And don’t worry if you get low on water, plenty of fountains are on site for you to stay hydrated.

Among the 300 animal species housed at the museum you’ll find several which are endangered. These include the Mexican wolf, thick-billed parrot, ocelot, margay, jaguarundi, desert pupfish, and the Sonora chub. You’ll also find the endangered bonytail chub, razorback sucker, Gila top minnow, Colorado River squawfish, Isla San Esteban chuckwalla and the Apache trout. You won’t find all of these species in a single location anywhere else on the planet and for that, the price of admission is worth it.

The museum staff takes great pride in its “Raptor Free Flight,” show and rightly so. Held twice a day, at 10am and 2pm, trained raptors take to the air in free-flight displays, flying to predesignated trees or staff members. The birds fly very close to the crowds, which offer incredible opportunities for memorable pictures, so be ready. And speaking of staff, during your visit you’ll see uniformed docents located throughout the museum to happily answer any questions you may have about the animals, the Tucson area, and the museum in general.

Like most zoos, the Desert Museum has had a few escapes over the years. Probably the most famous was the so-called “beaver breakout.” A brief account of this escape is on the museum’s website: “One night, the beavers left their pond, waddled through the bighorn enclosure and escaped into the desert. The next morning Museum people followed their tracks, which headed west and before long stopped near a set of coyote tracks. Swirling beaver tail prints in the sand showed how the beavers had made an about-face and headed back to the safety of their pond. They never attempted another escape.”

For those visiting with an RV, the excellent Gilbert Ray Campground is located just a few miles from the museum. Camping at this Pima County campground is on a first-come, first-served basis. The campground has 130 RV sites with individual 30 amp electrical hook-ups and picnic tables and offers centrally located water, restrooms, and an RV dumping station. The park’s busiest season generally runs November through April. Camping fees are $10.00 per night for tents and $20.00 per night for RVs. Unfortunately, wood fires are prohibited.

If boondocking is more your style, then the Snyder Hill BLM 10 miles south on Highway 86 (Ajo Way) will serve you well though it won’t win any awards for its beauty. You can find it on the north side of Highway 86 and S. San Joaquin Rd. You can’t miss it, just look for parked RVs.

The Arizona-Sonora Desert Museum is a magical place where you can see the wildlife and natural beauty of the Sonoran Desert all in one convenient location. Whether you’re a tourist or local, young or old, the Desert Museum is an attraction you don’t want to miss. 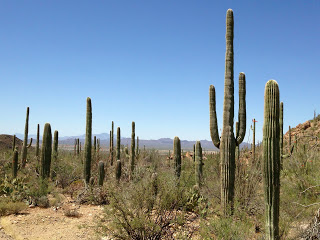 If you want to enjoy pristine landscapes dominated by the mighty Saguaro, then this park is for you. The Saguaro National Park actually consists of two districts, the Rincon Mountain District east of Tucson and the Tucson Mountain District west of Tucson, the latter a short distance from the Arizona-Sonoran Desert Museum. Saguaro National Park encompasses 91,327 acres in its two districts and provides visitors with a diversity of terrain. The Rincon Mountain District (East) rises to over 8,000 feet and includes over 128 miles of trails, while the Tucson Mountain District (West) is generally lower in elevation with a denser saguaro forest. Beware that some of the roads in the park are unpaved and may be a little rough. The park has no campgrounds, but does offer numerous hiking trails and picnic areas. Admission is $10 per vehicle or $5 for visitors who arrive on foot or motorcycle. 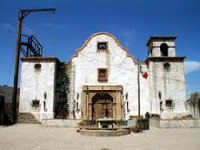 w miles from the Desert Museum, Old Tucson will transport you back in time to the late 1800s, when cowboys with six shooters ruled the Old West. Old Tucson was never a town, per se, but a movie studio created in the late 1930s for western films. The movie sets here have been used in more than 300 movies and television productions. Notables include Rio Bravo, 3:10 to Yuma, El Dorado, and Gunfight at the OK Corral. Still an active studio, if you’re planning on a visit, make sure you check their website calender as the attraction is sometimes closed for filming. Admission is $16.95 for adults ages 12 and over and $10.95 for children ages four to 11, children ages three and under are admitted free of charge. All park shows and tours are included in the admission price. Games, food, stagecoach and trail rides are available for an additional fee.

About Mello Mike 746 Articles
Mello Mike is an Arizona native, author, and the founder of Truck Camper Adventure. He's been RV'ing since 2002, is a certified RVIA Level 1 RV Technician, and has restored several Airstream travel trailers. A communications expert and licensed ham radio operator, he retired from the U.S. Navy in 2004 as a CWO3 after 24 years, worked in project management, and now runs Truck Camper Adventure full-time. He also does some RV consulting, repairs, and inspections on the side. He currently rolls in a 4WD Ram 3500 outfitted with a SherpTek truck bed with a Bundutec Roadrunner mounted on top. - KK7TCA
Website Instagram YouTube

For those who love classic Airstreams and aluminum campers nothing beats an old Avion truck camper. It never fails, whenever we see an Avion along the side of a road we have to stop and [read more]

No tour of the American west would be complete without a stop at Monument Valley. Few places are more striking, more iconic, and more well known than Monument Valley’s massive red buttes and mesas. Indeed, [read more]

“God created the Grand Canyon but He lives in Sedona,” the old saying goes. If you’ve ever been to Sedona, Arizona you know why. Sedona’s vivid red buttes, picturesque canyons, and mysterious vortexes are famous [read more]