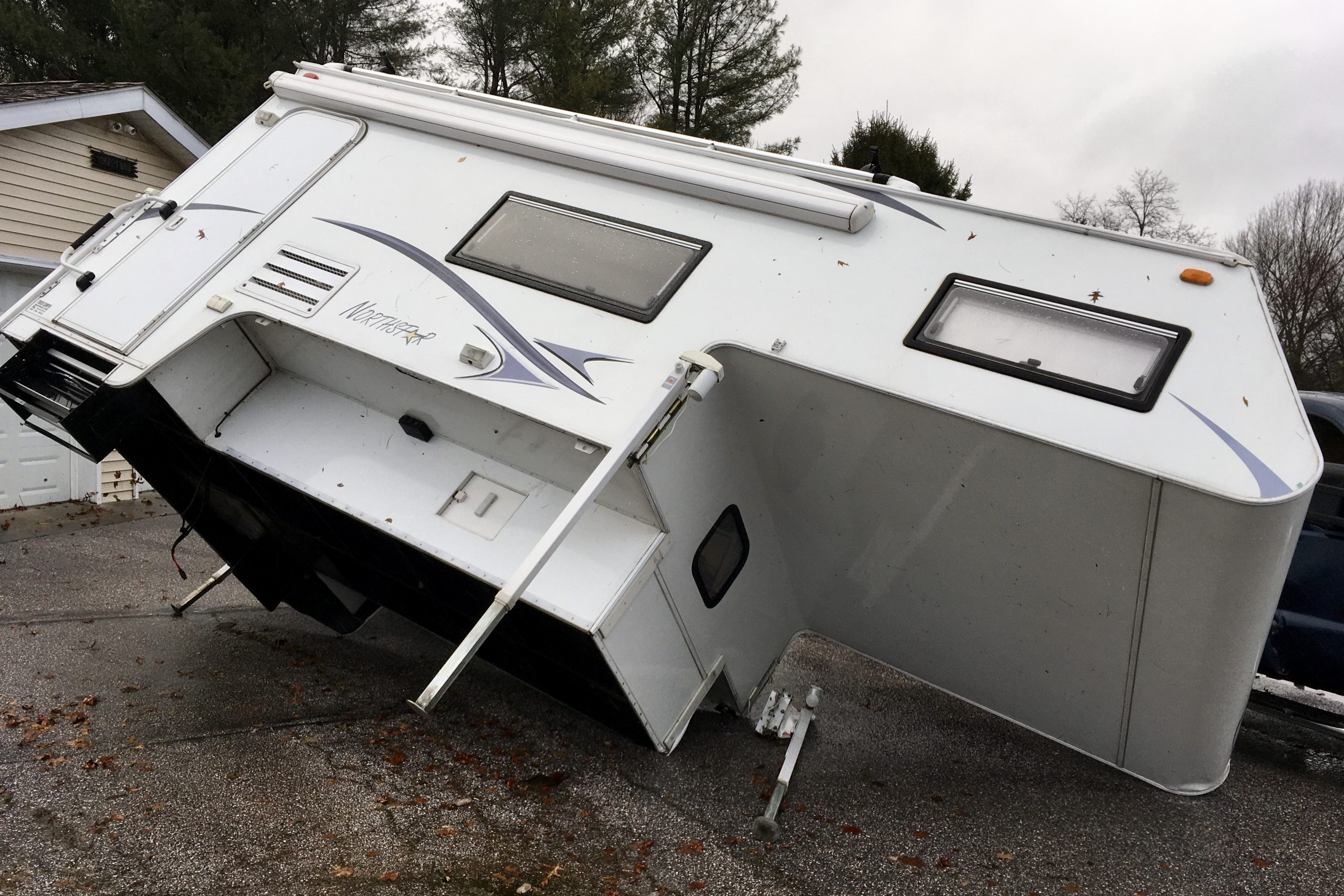 Our 2015 Northstar 12STC truck camper, reviewed here on Truck Camper Adventure last year, learned a new aerial trick when one of the five tornadoes that touched down in Maryland on February 7, 2020 visited our neighborhood.

We saw the live action unfold on our driveway camera as the EF1 tornado struck. At first the camper wobbled, then kneeled forward and twisted in the breeze when the driver-side front jack ripped away. The roll continued, reaching about 110 degrees, but the full dance was interrupted by my wife’s car, parked alongside. The camper rolled up onto the hood and roof, going almost all the way over and crushing both, exploding a virtual glass grenade inside the car. The camper then rolled back a bit, twisted, and came back down with the cabover nose pivoting into the side of our truck. The truck passenger side mirror took out the escape hatch and cracked the fiberglass at the camper passenger side top marker light. The camper retaliated by dashing-in the two passenger-side truck doors and the running board. When the wind gusts abated a bit, the camper rolled back upright-ish and stabilized at around 45 degrees, supported by the cracked cabover nose, the crushed and torn left front corner of the base where the jack used to be, and a bent left rear jack.

I hadn’t realized until then that the camper and the truck had some sort of love-hate relationship, nor the apparent jealousy both entertained for the once nimble, little Honda CR-V. When the wind and rain stopped and the damage had been assessed both camper and car were declared totaled, and the truck went off for a three week expenses-paid vacation in the body shop spa. If the camper had been on the truck it’s likely there wouldn’t have been a roll-over, based on past hurricane experience, but as it happened the truck was probably the only thing that stopped the camper from going all the way over the car and somersaulting downhill into the rhubarb patch.

The camper recovery process was “interesting.” That Saturday it was sunny and low 40’s, but the ground was still a bit swamp-like. Good enough weather to add some duct tape to the escape hatch holes and cracks, safely extract everything except propane tanks from outside storage compartments, unbolt the canoe rack, and peek into the rear window from a ladder to scope out the carnage. On Sunday morning, the head of the local redneck rigging crew, same address, wandered out, coffee in-hand, while cogitating about rigging advice from the camper dealer. Almost all of the usual stuck-truck-and-camper retrieval gear normally lives in the truck. That left whatever was stored in the yard shed for the job. Hard-core off-roaders who have recovered rigs with only a flip-flop winch can snort in derision and move on, but suburbanites might keep reading. 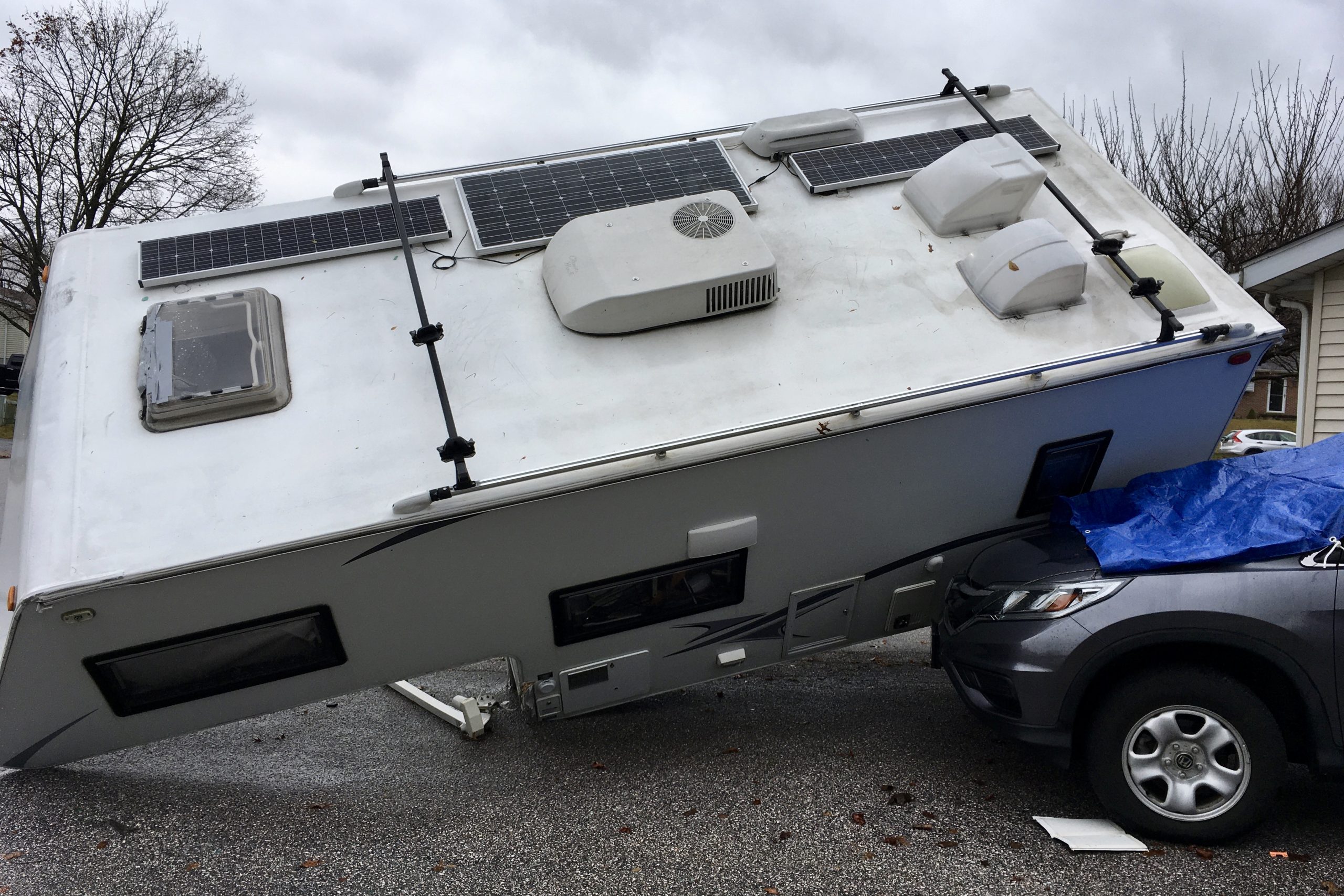 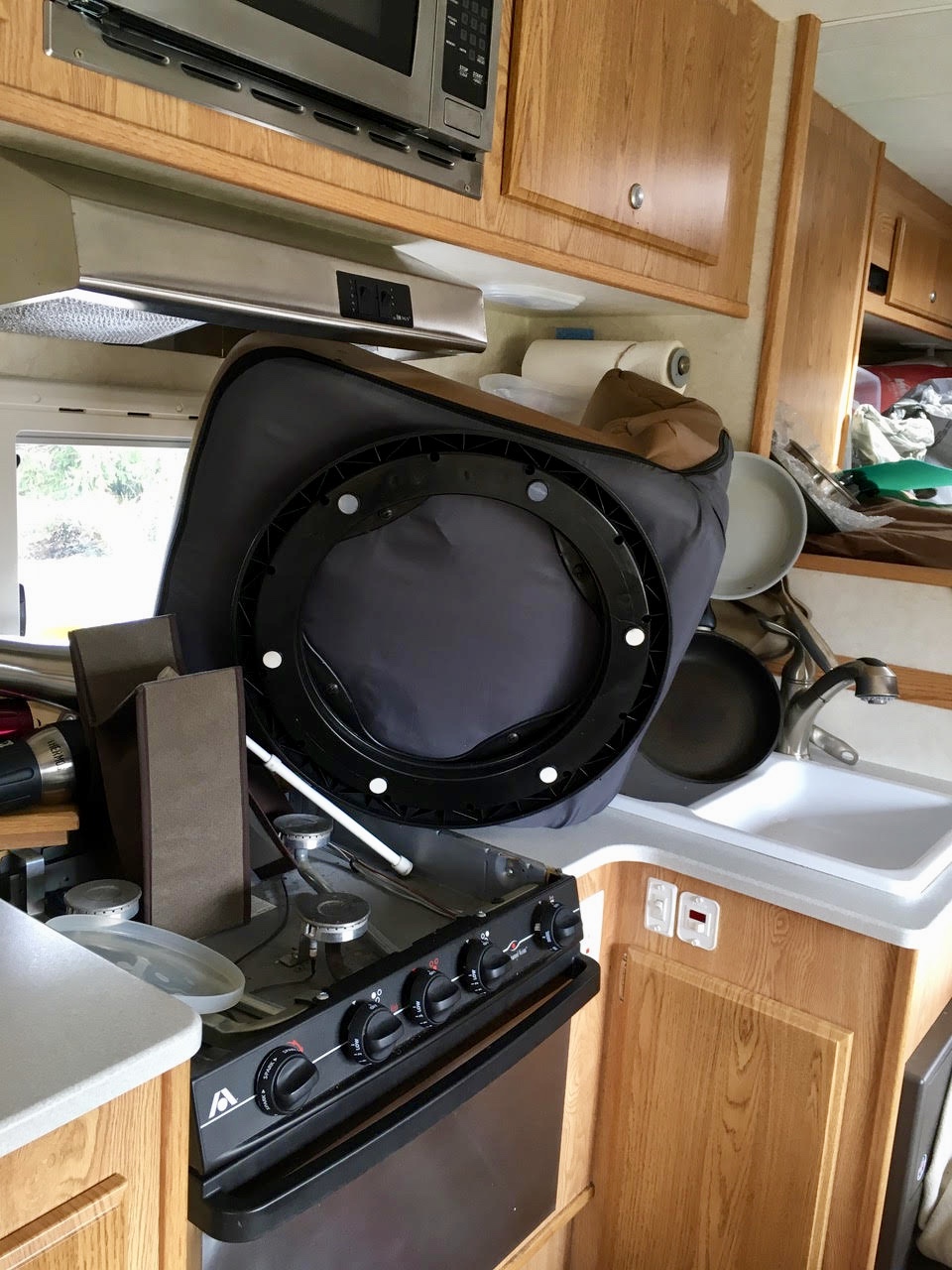 Sunday afternoon was mid-40’s, sunny, with somewhat drier ground. The one-man rigging crew snuck outside when his partner was distracted, gathered some gear, and headed for the driveway. The lawn tractor—complete with chains and mounted snowblower—got parked out on the front lawn as an anchor for a Maasdam rope puller. An auger ground anchor with a single-spool pulley attached went in at the edge of the pavement. A chain was attached to the camper high side tie-downs with the puller’s hook centered on the loop, rope through the pulley and back to the tractor. With only one pulley there was no way to rig a more efficient compound setup, but at least the pull was downward and not sideways. At about this point the rigger’s more sensible better-half, alerted by the sound of the tractor, arrived at the crime scene in a more than moderate degree of agitation and apprehension. Discussion ensued, probably not helped much by the rigger’s comment that at least he wasn’t saying something like, “here, hold my beer, watch this!”

A bit later, work continued. An old hydraulic lift table, positioned partially under the front of the bottom of the camper, was unsuccessfully used first. It was hoped that after winching, the camper would come upright and lay flat on the table, unable to roll further and destroy the undamaged passenger side jacks. A stump helped support the bent rear jack corner, and a jackstand was positioned as far forward as possible on the down side of the camper bottom. As tension was increased on the puller, the stand plus other hunks of the wood as backup were carefully kicked forward as the camper inched upright. Plan A was to get the camper onto the lift table, Plan B was to get it far enough up and stabilized so that a floor jack could at least be placed at the left front corner jack location. Plan B won out as the ground anchor began to pull out of the soft ground and the tractor started to slip backwards on the muddy lawn. One more pulley and Plan A coulda/woulda worked. Eventually the floor jack was in place with the lift table snug under the camper and partially supporting it. The camper was only back up at about 40 degrees, but at least it was ready for the next phase of the recovery. 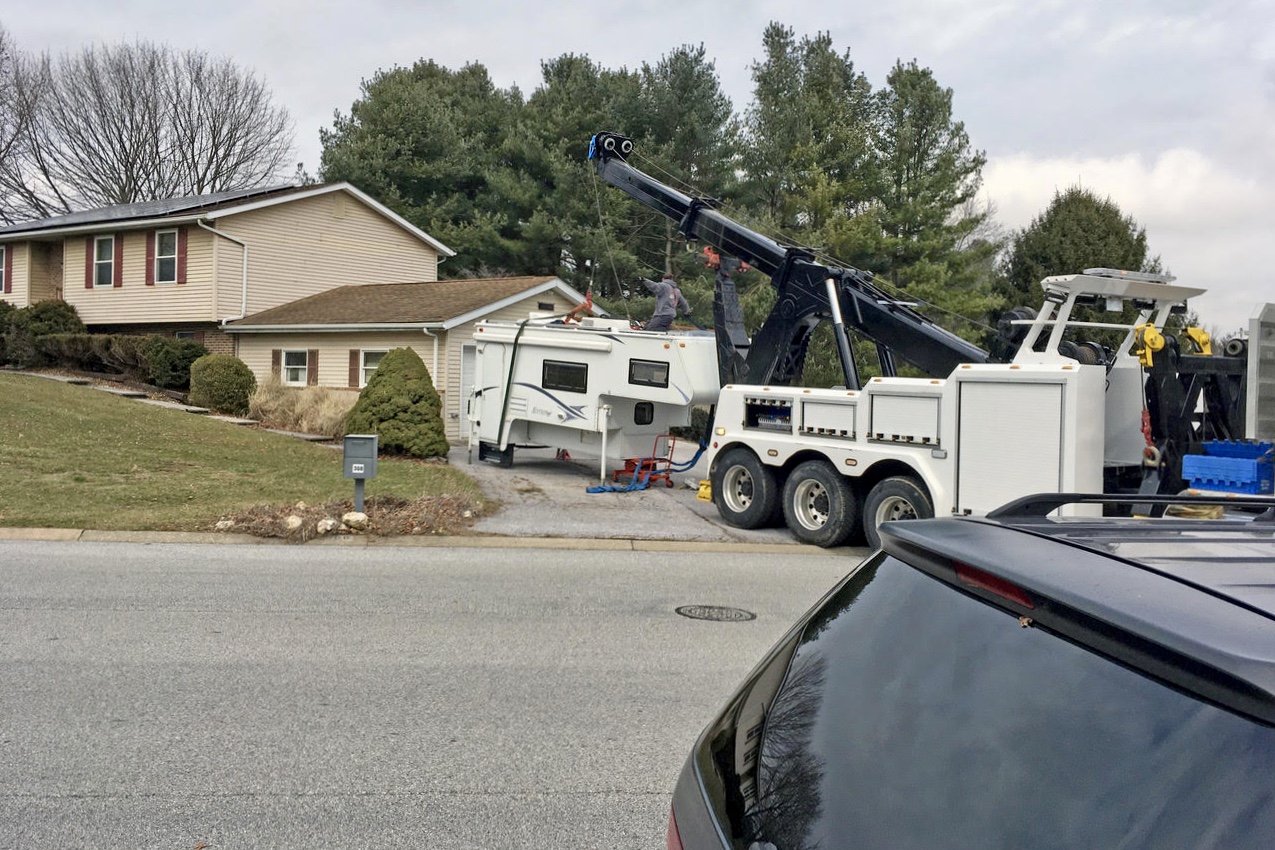 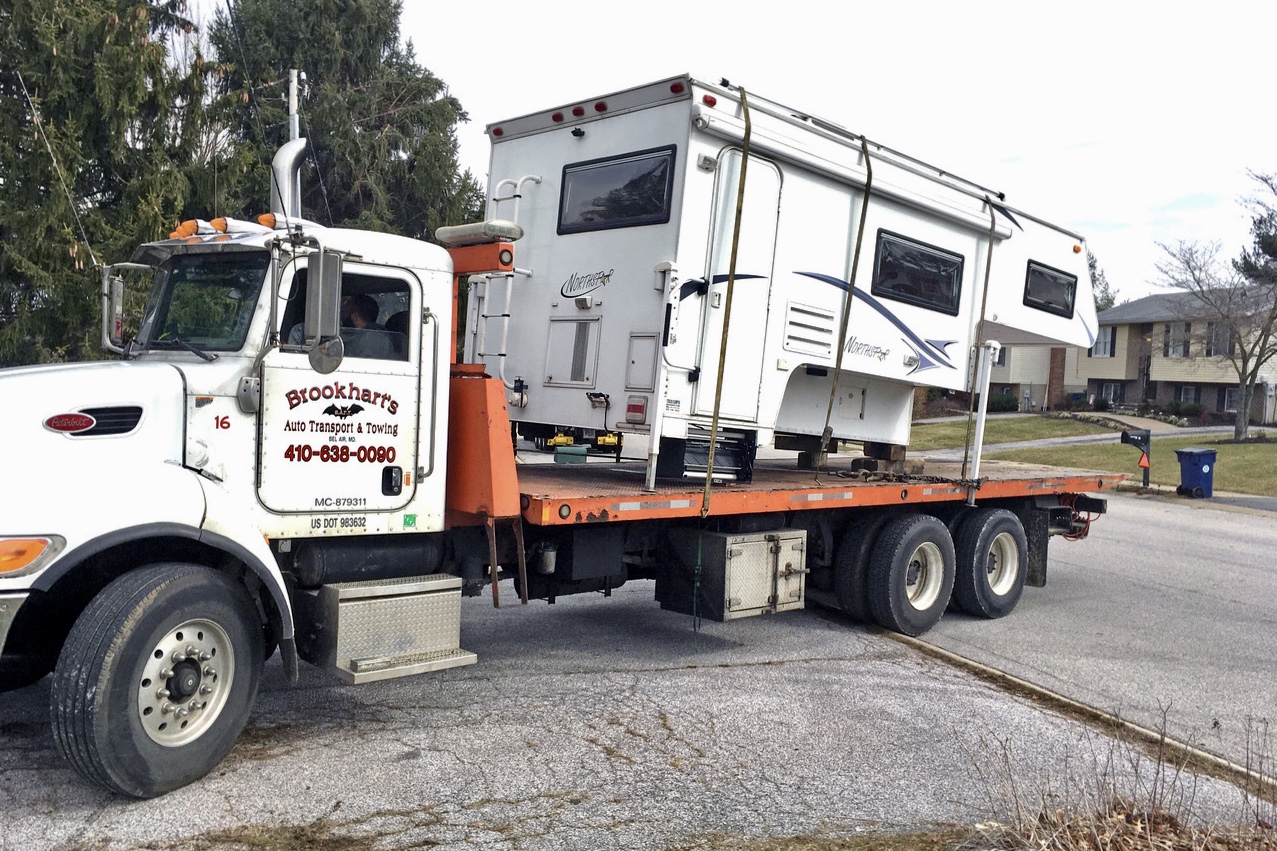 Monday morning arrived with a platform tow truck. Its driver had never done an RV recovery, let alone seen a truck camper before. Redneck Rigger asked that he drop the platform and position it partly under the high side of the camper base. As the recovery winch took a slow strain on the tie-down chain, Redneck used the floor jack to lift the far corner at the same rate. The camper was soon flat on the lift table, with jackstand, various stumps, and the two undamaged jacks also supporting the camper. The tow winch had to pull sideways on the camper tie-downs and they bent a bit but didn’t fail, nor did the camper frame at the tie-downs.

Even after all this, the camper door, windows, and all compartments inside and out still operated normally. Amazingly, the camper frame was still square, in spite of a crushed sidewall where it had landed on the car, partial tearing at the bent rear jack, flattened corner where the front jack had torn off, and a crushed cabover nose corner supporting the camper on the ground. That’s one tough wood-framed, hung-wall camper. Kudos to both the design and the Northstar factory folks who glued and screwed the thing together. I’d recommend a computerized approach for the next structural stress analysis.

The next couple of days were spent recovering our “stuff” from the camper, including two just-installed lithium batteries. Fortunately the camper had not come with batteries included. Duct tape made acquaintance with all accessible fiberglass cracks, but the escape hatch damage couldn’t be totally sealed. At my wife’s suggestion, after pulling the mattress back into the camper, I duct-taped a disposable baking pan underneath. Presumably the eventual tow driver can be convinced to tarp the unit and the mattress can go back in place before moving. None of our personal stuff was broken, although two high-side cabinet locks did fail when their screws pulled out under internal barrage. Items from a recliner to assorted pots and pans made friends in and on the kitchen sink.

The words “nothing broken,” is something of a joke in our home—when we bought our first camper I’d gone looking for “RV stuff.” I’d found a great guy-deal on a set of discontinued Corelle dishes, hauled it home, mighty hunter proudly presenting his on-sale kill, only to be met with shall we say less than exuberant enthusiasm. Form, fit, function, pick any two, as guys say. My bad. The dishes were apparently truly girl-appalling-ugly and the non-verbal reaction to them reminiscent of a look that makes an old dog put tail between legs and slink away, whimpering. Now, 20-some years, four campers and at least 200,000 camper miles later, those pesky dishes still hadn’t broken in a tornado roll-over event. Sigh.

Are there any lessons to be learned from this somewhat freak accident? Yup. I’ll be ordering a new Northstar 12STC, hopefully repeating my original counter space and cabinet customizations. Lots of enhancements have been made to this model in the past four years, incorporating requests from both customers and dealers. Nice to deal with a company that makes a sturdy product and embraces continuous improvement. Also, as soon as the sad carcass of this one has been hauled away and I get my truck back to haul supplies, I’ll be installing four concrete-embedded, recessed tie-down anchors in the driveway and building a heavy-duty sawhorse to help support the new camper just behind the front jacks. Strangely enough my long-suffering wife is also looking for a different parking spot, one hopefully always upwind of the camper location. All this will definitely ensure that no further tornadoes ever again come through the neighborhood, although that’s likely to be a forever-unacknowledged little bit of public service.

I’m sure we’ve all done it at one time or another. You’ve loaded up the RV for what you hope is an unforgettable trip. You get on the road and are heading toward your destination [read more]

When it comes to boondocking and exploring off-grid in your camper, few things are more important than your 12 volt batteries. This power is needed to run everything from your refrigerator, furnace, and water pump [read more]