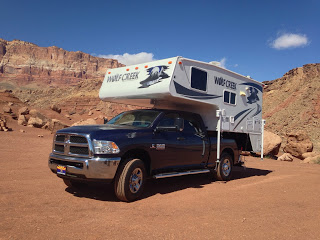 After two dozen trips and 3 1/2 years of ownership we’ve decided to sell our 2011 Wolf Creek 850 truck camper. This decision was a difficult one for the wife and I to make. “Wolfy” has been a great little camper for us, but we’ve found over time it’s too tall and wide for the kind of roads and terrain my wife and I like to explore. The camper is in terrific shape, and as you know, it’s fully loaded and ready to go.

We will be replacing “Wolfy” with a 2016 Northstar Laredo SC. We just ordered one custom from the Northstar factory. Why a Laredo and not a pop-up? We seriously considered a pop up, but after looking at several, we came to the realization that we like hard side campers and like that we don’t have to crank up the top every time we want to set up camp. The low profile Laredo SC gives us the best of both worlds, a non-basement model that is 8 inches shorter and 1 foot narrower than the Wolf Creek 850, yet still has all the comforts that we’ve come to enjoy in a hard side camper.

Some of the options we ordered in our Laredo include large Euro windows, a dual battery compartment, insulation
upgrade, side storage boxes, rear bumper w/step, A/C, a 12V
Compressor Refrigerator, heated gray tank, and electric remote jacks. I’ll install a 240
watt solar power system and 1,000 watt inverter after delivery. It’s much cheaper for me to do the work myself.

The Laredo SC comes standard with a 30 gallon fresh water tank (the same as the Wolf Creek 850), a 13 gallon gray tank (9 gallons smaller than the Wolf Creek), a 5 gallon cassette toilet, and a 6 gallon water heater. We are really looking forward to having a cassette toilet and having more places to dump.

We take delivery of our 2016 Laredo SC in early September. Here are a few pics of a nearly identical Laredo SC:

For those who are interested, I’m asking $15,500 for my Wolf Creek 850. Additional details about my Wolf Creek 850 can be found in my Craigslist ad, or by reviewing the trip reports and truck camper modifications on this website. [Update: My Wolf Creek 850 was sold to a local Arizona couple on May 13, 2015.]