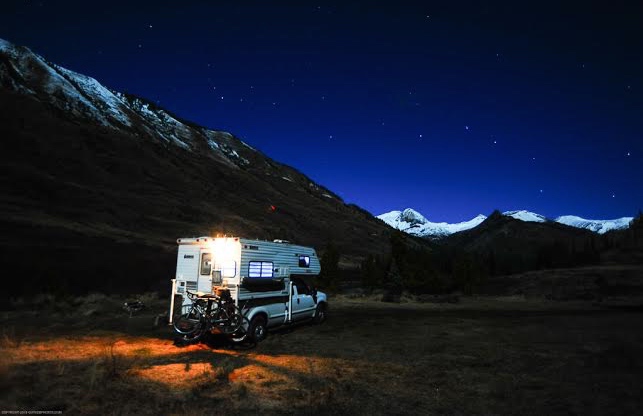 Merry Christmas, everyone! The winner of the 2015 Truck Camper Adventure off-road truck camper photo contest is photograph 39 by Guy Van den Branden of Belgium. His winning night-time shot was taken at Crested Butte, Colorado. Guy, along with his wife, have been exploring South America and North America the last two years in their 2001 Ford F-250 and 1999 Lance 835 and are now enjoying the American West. As the winner, Guy will have the choice between either a Timbren SES Suspension Kit or Timbren’s brand new offering, a set of Active Off-Road Bumpstops.

The third place winner is entry 33 by Dave Rogers. Dave’s photograph was taken at the Lee’s Ferry Overlook in northern Arizona. Dave’s truck and truck camper rig is a 2007 Outfitter Apex 8 and 2007 GMC Sierra 2500HD. As the third place winner, Dave will receive a $25 cash prize.

A BIG thanks to all who all took the time to send in photographs, to those who voted, and to Timbren for sponsoring this year’s event. The entries for this first-time event were outstanding (click here to see the 2015 entries). Be on the lookout for photographic opportunities in 2016. Truck Camper Adventure will be holding another off-road truck camper contest on Christmas, 2016.