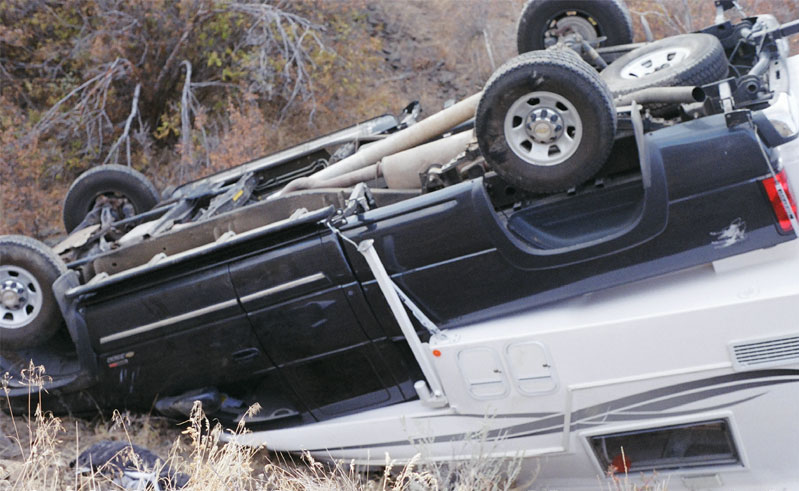 We’ve all seen the Torklift advertisement at one time or another. The ad is about the Torklift International FastGun, the company’s popular, spring-loaded, lever-action turnbuckle. On the right side of the ad are two photos of a truck and camper. The first shows the combo flipped upside down, wheels facing skyward; the other shows the truck and camper right side up and being pulled up a steep embankment by a tow truck. The ad reads “Torklift held up, will you?” Torklift’s ad boasts that their FastGuns and Tie-Downs held the camper to the truck and were even used to extract the combo from the steep embankment. It’s an attention-getting ad with a pretty amazing claim. Have you ever wondered about the accident? What happened? Where it happened? And if everyone involved was okay?

Unfortunately, we were able to locate Gary Engebretsen, the truck camper owner involved in the roll-over, but Torklift was kind enough to share a few details of the accident with me. Gary had been waiting for quite some time to get his sheep tag. Having it finally in-hand, he and his son anxiously set out on their long-awaited hunting adventure to eastern Washington. Gary and his son were driving down a remote, dirt road in their Chevy Duramax pickup and Northern Lite truck camper when the soft dirt shoulder underneath them suddenly gave way. The collapsing roadway resulted in the truck and camper rolling down a steep embankment and flipping over.

Fortunately, Gary and his son were okay–both were wearing seat belts. The truck and camper, however, didn’t fare so well. Both were considered a total loss. Yet, in spite of the damage and the violent roll-over, the truck and camper stayed together as one unit. It took two tow trucks to pull the truck and camper out of the embankment and to make them upright again. Not only did the FastGuns and Torklift Tie-Downs keep the camper secure to the truck during the roll-over, but they also were used as a leverage point when the truck was put upright.

This roll-over is an amazing story with plenty of safety lessons for all. First and foremost, Gary and his son were both wearing seat belts. There’s no telling how they would’ve fared without them, but we’re sure they wouldn’t have been able to walk away unscathed like they did. Even on trails and deserted back roads, it’s important to wear your seat belt–you never know what’s going to happen. Second, Gary was using a set of Torklift frame-mounted tie-downs and FastGuns on his truck and camper. There simply isn’t a better, more secure way to secure your truck camper to your truck. This isn’t hyperbole–it’s a fact. We’ve seen the damage that other tie-down systems and turnbuckles can cause to a truck and camper and it isn’t pretty. If you need further evidence, look at this accident and look how well the Torklift system performed under extreme duress. 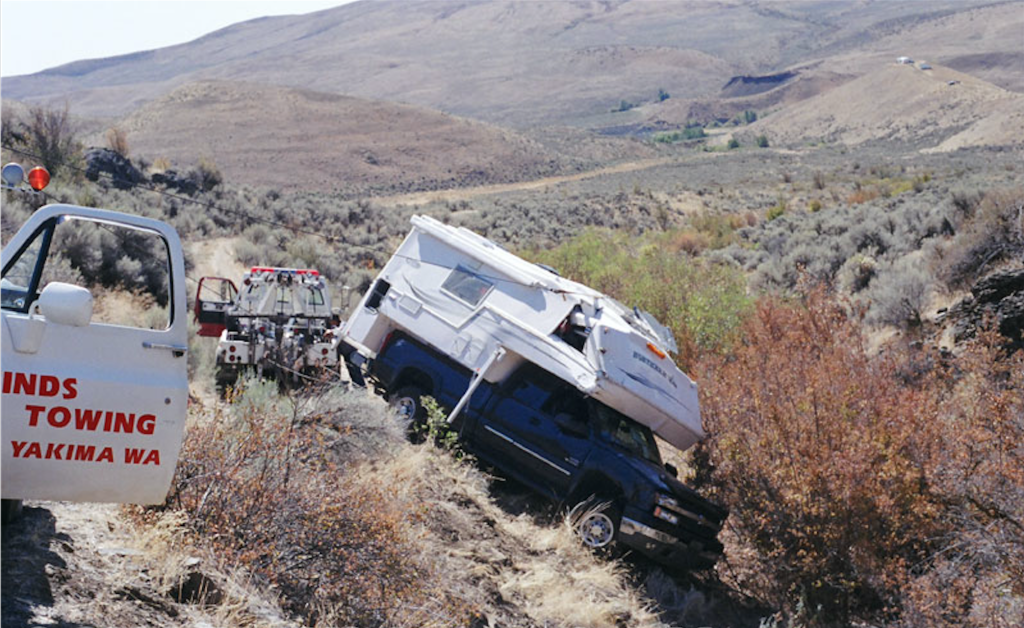 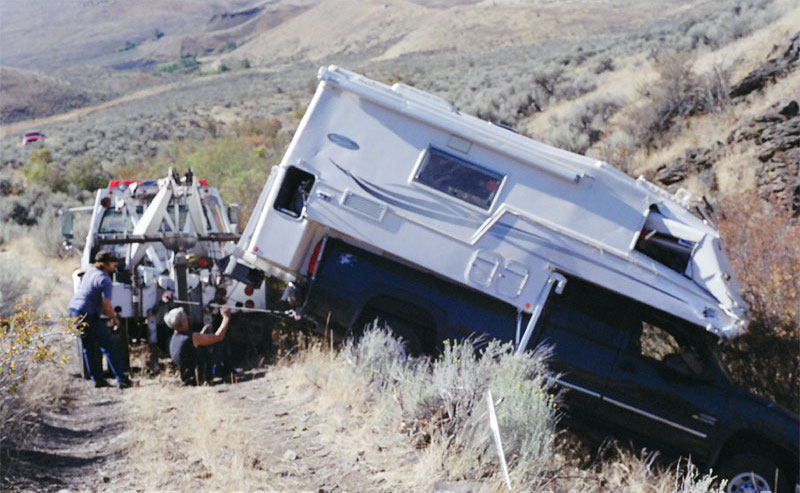 In case you’re unfamiliar with the product, the Torklift tie-down system might just be the crown jewel of the company’s product lineup. Constructed of powder-coated steel, it consists of four independent, frame-mounted tie down receivers that work much like a standard hitch receiver as the tie down inserts are removable. This means that when you’re not hauling your truck camper, the tie down receivers are practically undetectable. Better yet, the tie down receivers bolt to the undercarriage of the truck’s frame using existing bolts, holes and attachment points. No welding or additional drilling is necessary. Anyone handy with tools can install the tie-down receivers and all four can be installed in under two hours. If you prefer something lighter, Torklift now offers the Talon, an aluminum version of the same system.

As you’d expect, the Torklift FastGun complements the Torklift tie-down system perfectly. The FastGun is a truck camper turnbuckle constructed of 100 percent stainless steel. Sold in packs of two, it consists of a lever on top, a rugged, stainless steel body in the middle, and a threaded, steel rod with a hook on the bottom. It’s made in the USA and comes with Torklift’s legendary lifetime guarantee. It can be purchased in high-impact, powder-coated white or gray or polished stainless steel and can be purchased for either bed-mounted tie down systems like those made by Happijac or frame mounted systems like those offered by Torklift. Some assembly for each FastGun is required out of the box, but doesn’t take more than 10 to 15 minutes for each. Four FastGuns, two in the front, and two in the back, are required to fully secure your camper to your truck. You can buy a complete set of four for about $425.

An important feature and benefit of the FastGun is the built-in spring-loaded mechanism. The problem with the older turnbuckle systems is that they had no “give” in them. A pothole or bump at high-speed could bend or damage a tie down or yank the eye-bolt from the frame of the camper. In contrast with these older, archaic systems, the FastGun’s spring-loaded mechanism has enough “give” to respond to most external forces encountered on the road, yet provide enough strength to keep the camper secure even during a rollover accident. It’s a fine balance that Torklift has successfully been able to achieve.

So are a set of FastGuns worth the $425 price tag? That’s up to you to decide. For us it was a no-brainer. You can certainly spend a lot less money for a simple chain and turnbuckle system, but the excessive time it takes to install them and the risks they impose on your $30,000 truck camper isn’t worth it. In our opinion, it doesn’t make sense to go cheap on a turnbuckle system after spending five figures for a modern, well-equipped truck camper. So if you’re looking for the best turnbuckle on the market, go with the American made FastGun. The quality, ease of use, and lifetime warranty make it a great value and well-worth the extra cost.

Have you ever been told something, and believed it, only to find out later what you were told wasn’t true? When I bought my Wolf Creek 850 truck camper back in September 2011 I was [read more]

Well, we finally have it! We picked up our Northstar Laredo SC truck camper from the factory in Waterloo, Iowa on September 11 and spent the next eight days in it, driving from Illinois to [read more]

I’m sure we’ve all done it at one time or another. You’ve loaded up the RV for what you hope is an unforgettable trip. You get on the road and are heading toward your destination [read more]