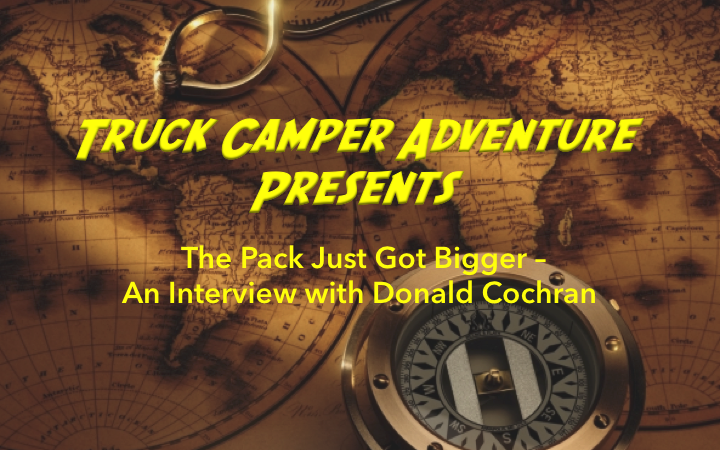 The Wolf Creek 840 is hard side, aluminum framed, non-slide truck camper built for short and long bed pickup trucks. It has an interior floor length of 8 feet, 6 inches, a width of 8 feet, and an interior height of 6 feet, 6 inches. It boasts impressive tank capacities with a 29 gallon fresh water tank, a 27 gallon grey tank (8 gallons more than the 850 model), and a 20 gallon black tank. For those who like to camp off-the-grid, the camper’s battery compartment can hold two batteries while the propane compartment can house two 5 gallon propane tanks. With a dry weight of only 1,992 pounds and a wet, fully loaded weight of around 3,000 pounds, the Wolf Creek 840 is light enough to be carried by heavy-duty half-ton trucks as well as most three-quarter ton trucks found on the road today.

The light weight of the Wolf Creek truck campers is what makes them special. In an era when many truck camper manufacturers have adopted the “bigger is better” mantra and are producing 5,000 and 6,000 pounds behemoths with multiple slide-outs, Northwood Manufacturing bucked the trend by going in the opposite direction with the Wolf Creek. To find out why you only have to look at the trucks most people drive today. Not everyone owns a one-ton truck, there are millions of half-ton and three-quarter ton trucks already on today’s streets. These light duty trucks offer smaller payloads which make it impossible to safely haul heavy campers with one or more slide-outs. Not only that, but non-slide truck campers cost less, are more nimble, and are easier to maintain. Any one of these benefits is reason enough to buy a Wolf Creek.

To tell us more about the Wolf Creek line of truck campers and the new Wolf Creek 840, I spoke with Donald Cochran, the Director of Sales for Northwood Manufacturing.

Donald: Definitely! We feel the Wolf Creek gives us an additional customer base by offering a lighter camper than the Arctic Fox. We have experienced great success with the Wolf Creek campers. The Wolf Creek 850, in particular, has been a big seller.

What percentage of your current truck camper production does the Wolf Creek camper currently comprise compared to the Arctic Fox campers?

Donald: The Wolf Creek campers comprise 12 percent of Northwood Manufacturing’s truck camper production. That may not sound like much, but that’s a pretty significant number for just the three years that they have been around.

Donald: The Wolf Creek 850, by far. It makes up 90 percent of our current sales.

How long does it take to build a Wolf Creek truck camper?

Donald: It takes about three days to fully assemble one, but planning and prep takes longer. From the moment we first start planning a build to the time it takes to complete one takes about five weeks.

Regarding all Wolf Creek campers, how are the front, rear, and side walls attached to each other and the floor and roof?

Donald: The wall, roof, and floor frames are constructed of .060 inch thick aluminum using full welds, but heavy gauge screws are used to attach each frame to the camper. In addition, the perimeter of each frame is filled with a solid wood core blocking to provide a better connection for the screws to bite into.

Northwood Manufacturing is known for its strict quality control. Can you tell me a little more about this process?

Donald: Testing and inspections are conducted immediately after each phase of construction. We
do this to help troubleshoot any issues that may arise during construction. If a problem is
found, it lets us know exactly at what point the problem occurred which makes it much easier to correct. We also conduct a full PDI before each unit ships to the dealers. This includes the operation of all appliances and a full inspection of all electrical wiring runs and all plumbing. Each and every component is tested to verify proper operation before it leaves the factory.

Aside from the location of the bathroom and kitchen, are there any other differences between the Wolf Creek 840 and 850 models?

Donald: The location of the bathroom is the main difference through there are some minor differences in the tank sizes. It really comes down to personal preference on which floor plan the customers will like.

I noticed in some recent factory photos that the Wolf Creek 840 has what appears to be a hatch underneath the main door? What is its purpose?

Donald: The hatch is an access panel for the gray and black water pulls and for the low point water drains.

How large is the Wolf Creek 840 battery compartment? Is it large enough to fit two Group 27 batteries?

Donald: Yes, it’s big enough for two Group 27 batteries. It’s the same size compartment as the one found in the Wolf Creek 850.

Donald: Yes, we do! We offer a Norcold three-way refrigerator as an option, but not many people order it because it costs twice as much as the standard two-way refrigerator we currently offer.

It appears that all Northwood Manufacturing campers have a new style of control panel. What drove that change?

Donald: The change came about from our regular travel trailer and fifth wheel lineup. Due to the positive customer feedback we decided to add them to the Arctic Fox and Wolf Creek campers. They’ve been a big hit.

Retrofitting LED lights was one of the first upgrades I made to my Wolf Creek 850. Are all lights in the Wolf Creek 840 LED?

Donald: All interior and exterior lights are LED except for the two reading lights in the bedroom. This applies to the 816 and 850 models as well.

Were there any lessons learned from the Wolf Creek 850, which helped your company design and build the new Wolf Creek 840?

I really like the new exterior graphics on the 2014 Wolf Creek models. Did customer feedback drive that change or did that come from the dealers?

Donald: A little of both. We rely a lot on dealer feedback and a lot of that, of course, comes from customers. But we also made the change as part of our process of making the graphics more modern and current.

Are there any plans to produce a large, non-basement model Wolf Creek camper for those who want a lower center of gravity for off-road use?

Donald: There are probably three or four different floor plans we are currently looking at and a non-basement model is part of that. The big negative with a non-basement model, of course, is the smaller tank capacities, but it’s something that is certainly on our radar.

Some people like options when choosing their camper. Are there any plans to produce a Wolf Creek with a cassette toilet?

Donald: Not at this time. It is something we can do, but there are no definite plans to produce one at this moment.

Does Northwood Manufacturing have any plans to further expand the current Wolf Creek camper lineup?

Donald: Yes! We are continually looking at ways to expand the Wolf Creek lineup, so stay tuned! I can see Northwood producing anywhere between four to six Wolf Creek models in the foreseeable future.

Are there any plans to produce a Wolf Creek camper with a slide-out?

Donald:  No. Right now we are planning non-slide out models only. The Wolf Creek lineup is a lightweight camper for light duty trucks, so slide-outs really don’t fit with what we’re trying to do. If a customer really wants a slide-out, we’ll give them a thousand reasons to buy an Arctic Fox.

Review of the 2018 Eureka Truck Camper – Last of Its Kind

My wife, Yoly and I retired over 12 years ago with a penchant and budget to travel. We had been traveling previously in a Ram 1500 with an A.R.E. shell on the back. We made [read more]