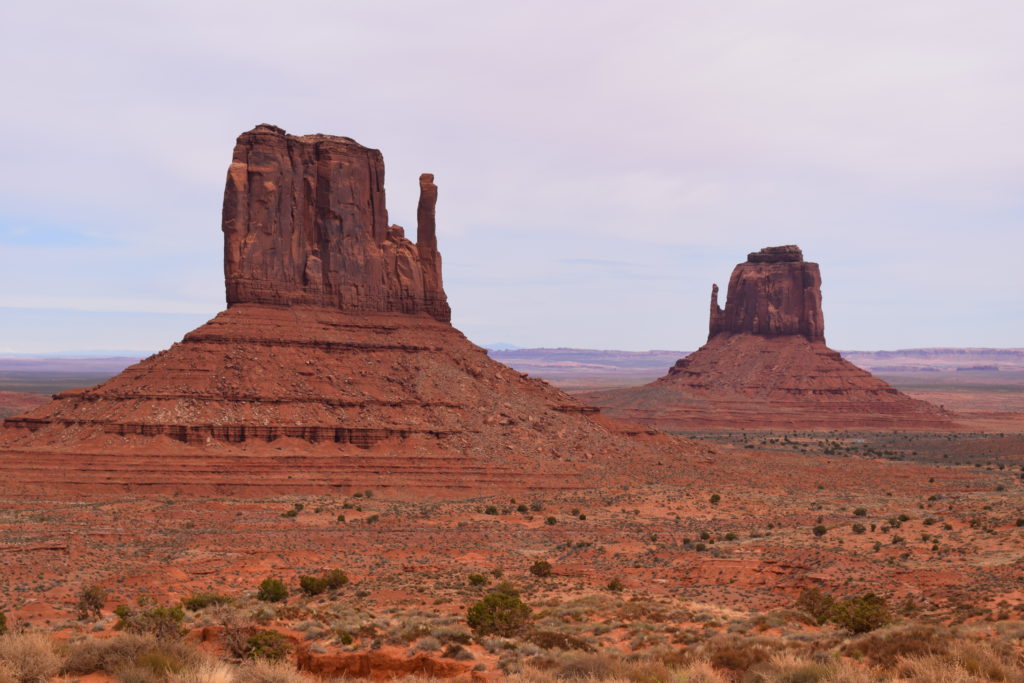 No tour of the American west would be complete without a stop at Monument Valley. Few places are more striking, more iconic, and more well known than Monument Valley’s massive red buttes and mesas. Indeed, it’s hard to conceive of a place that’s been photographed and painted more or has appeared in more Hollywood films. A partial list of films that were shot or partially shot at Monument Valley include, “The Searchers,” “Stagecoach,” “Once Upon A Time In The West,” “Forest Gump,” and “The Lone Ranger.” Monument Valley is a special place for other reasons, too. Located in the Navajo Nation within the Navajo Tribal Park, Monument Valley is a spiritual place held sacred by the Navajo people. It’s considered the heart of the earth to the Navajo; a land with arguably the most breathtaking view in the world. Monument Valley is also sacred because of it’s history as some of the greatest Navajo leaders and spiritual healers have lived there.

Monument Valley isn’t a “valley” in the true sense of the word, but a wide, arid, desolate plain with enormous red sandstone mesas, buttes, and spires dotted throughout. These monoliths, some rising as high as 1,000 feet, are actually the last remnants of sandstone layers eroded by wind and water after a massive geologic uplift. These formations have taken on descriptive and imaginative names like the Mittens (the wife thinks they look like giant snails), the Elephant, the Three Sisters, the Big Chief, Yei Bi Chei, the Totem Pole, the Rain God, the Camel, and the Bear and Rabbit. While you can get a pretty good view of Monument Valley from the highway, the best place to view the massive sandstone buttes and mesas is within the borders of the Navajo Tribal Park itself. The admission to enter the park is $20 per vehicle, which is comparable to what you would pay if you went to a regular national park like Canyonlands or the Grand Canyon. 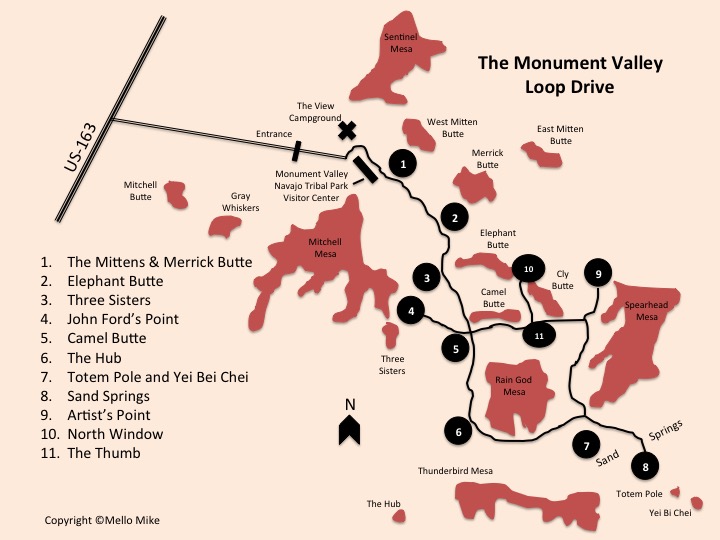 The best way to really experience the valley is by driving the spectacular 17-mile-long valley loop drive. Consisting of 11 numbered stops and taking about two to three hours to complete, this drive winds its way through the valley, then loops around the Rain God Mesa before taking you back to the visitor center. While the rough and dusty road can be challenging to drive in places any vehicle with a decent ground clearance and good shocks can safely navigate the route, though a 4×4 vehicle is recommended after a heavy rain. According to the official maps that we were given to us at the gate, RVs are prohibited from driving on the loop, but this, apparently, applies only to large class A motorhomes, travel trailers, and fifth wheels. Park rangers had no problem with our truck camper and the small number of class B and class C motorhomes that we saw driving on the loop. So how difficult is the Monument Valley Loop Drive? On a scale of 1 to 10 with 10 being the hardest, I’d have to give this drive a truck camper difficulty rating of 1.

We enjoyed the stops at the Yei Bi Chei, the North Window, and at Artists Point the most. At the Yei Bi Chei stop you’ll find The Cube, a large, square-shaped rock and a popular item to photograph in the park, especially by those attempting to “hold up” the rock with the hands and arms.  As you’d expect, the view of the Yei Bi Chei and the nearby Sand Springs is pretty impressive. We also enjoyed the view through the North Window. This vantage point was given this name because the view appears to be framed by a window with the Elephant Butte on the left and the Cly Butte on the right (Cly Butte was named after a revered Navajo medicine man, who is buried at the foot of the formation). Of the entire drive, Artists Point was, by far, our favorite. The wide, expansive view of the valley from this vantage point is both breathtaking and inspiring. I can see why Artists love to come to this point. We also enjoyed a nice, long stay here as we had lunch and a took in a short nap. Ah, the benefits of having a truck camper.

For RV owners, Monument Valley has pretty decent accommodations though boondocking is prohibited on the reservation. This basically leaves you with two choices on where you can set up camp for the night: Goulding’s RV Park, located a mile outside the park, or at a brand new primitive campground within the Tribal Park called The View. This campground doesn’t offer any hookups or much in the way of services, just trash, restrooms, and showers, but the views of the Mittens and Merrick Butte from The View are hard to beat. At an outrageous $41 a night, however, be prepared to pay for that view. We saw very few RV’s when we were there, probably due to the price. A far better option is at Goulding’s, located about a mile west of the park. The price to stay at Goulding’s is less for full hookups, plus you get free wifi, and laundry. Goulding’s is nestled in a small canyon, and it’s also one of the few RV parks where I’ve stayed where some of the roads and sites are terraced. Pretty cool!

While the guided tours can be pretty expensive, I’m told that they are well worth it. Tour lengths vary between two to eight hours and can cost as much as $110 per person. Taking a tour offers one big advantage in that you’ll be taken to areas in the valley you otherwise wouldn’t be allowed to see. These restricted areas include not only the so-called restricted loop, but also to a number of open arches, hieroglyphs, and ruins that are closed to the public. Perhaps the greatest value of taking a tour is the information that you’ll glean from the tour guides, this is information you won’t find in any book or pamphlet. A complete list of all authorized tour operators can be found on the Navajo Tribal Park website.

If you’re planning a week-long trip to Monument Valley and the Four Corners area I also recommend stops at Antelope Canyon and at the Anasazi cliff dwellings at Canyon de Chelly. Both attractions are found within the borders of the Navajo Nation. I also recommend that you check out nearby Goosenecks State Park, Valley of the Gods, and Muley Point. All three locations offer spectacular scenery and places where you can boondock, though Goosenecks State Park is now charging $10 a night to camp there. Goosenecks, Muley Point, and Valley of the Gods are only 25 minutes north of Monument Valley on US-163.

Over time the forces of nature have sculpted some pretty amazing and unusual shapes out of solid rock. Here in the Western United States, we’ve been fortunate enough to see and photograph several of these. [read more]

Unforgettable! Spectacular! Amazing! These are just a few of the superlatives that come to mind when describing the Burr Trail Scenic Backway in southern Utah. A former cattle trail, the Burr Trail provides the overlander [read more]

Exploring the Roads in the Organ Pipe Cactus National Monument

Arizona’s Organ Pipe Cactus National Monument has a checkered history. After its creation in 1937 by President Franklin D. Roosevelt, the national monument was known as one of the prettiest parks with some of the [read more]