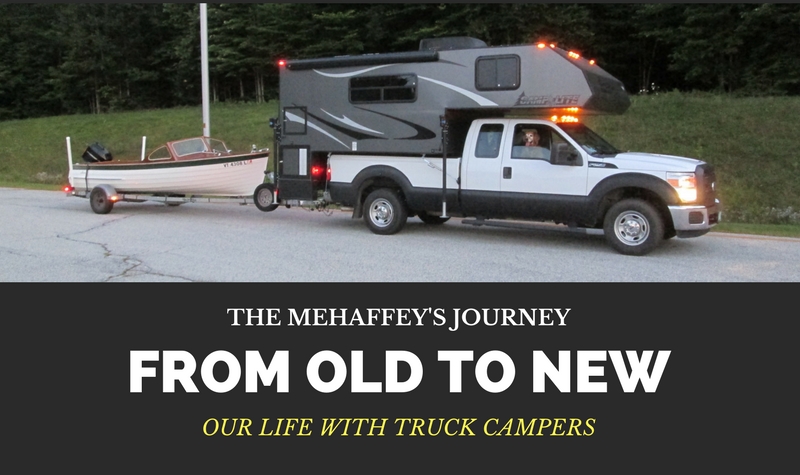 Over the last 35 or so years, my wife and I have pretty much been in the camper that other people try not to stare at as they pass on their evening walk or while riding around in their golf cart. We always appreciated that the passerby’s never made gasping noises or barely contained their laughter, most of the time. Let me tell you about our journey.

We were married over 35 years ago, and had our honeymoon in a Sears tent at Disney World, and at several campgrounds to and from Vermont. I had built a roof mounted luggage rack for our Chevette, which actually would make cornering on and off ramps kinda exciting. The poor Chevette would corner like the police cars used to on Highway Patrol reruns. We once stayed at a campground in Georgia that had a lot of bikers camping out, and between the noise, dirty bathrooms, and the rain, we decided that we had enough of the simple life.

I had a 1966 C10 pickup with a wood flatbed box and had seen an old boxy 8-inch plywood camper that someone had made. After paying $150, I put it on the back-end of the truck, and put a fresh coat of house paint on, and we drove down to Florida during February school break. We did not know that the camper had no insulation, and ended up sleeping with our extra clothes on and covered ourselves with our towels and blankets so that we would not freeze to death. It had an old gravity furnace that could not keep up with anything below 60 degrees. When we got home, I pulled the inside walls off, and put in foam board with new interior siding. Then I ran an extension cord out a hole I drilled, and with a space heater plugged-in, it was much better.

Another year or two down the road, and I built a cabover sleeper, put in a fuse box for the 110 volt, and a porta potty. Heaven. The camper had already been about 10 years old when I bought it, and eventually the plywood started to delaminate. What to do?

Well, the answer was some awesome cedar siding of course. It would have made Jed Clampett proud. I had added marker lights, a sink, a two-burner gas stove, and an old 13-inch color TV in the sleeper. It worked great, but we made the mistake of going to a Canadian drive thru zoo monkey enclosure. Well, about 20 monkeys pulled all of the caulking off of every corner and joint on the camper to chew like chewing gum. By this time, we had bought our first house, and the camper was on its last legs. So I cut up the camper with a saws-all, took out the appliances, and burned the camper in pieces in the backyard.

Then I bought a 1958 GMC/Grumman delivery van. It was absolutely bare inside. No heater, nothing but bulletproof aluminum. So I built an interior frame, glued on more foam board, and put a really nice interior of tongue and groove 6 inch boards for the roof and walls. I attached a couple of 3/4-inch plywood sheets for the floor, built cabinets and a real bathroom area for the porta potty. I got an old radiator and blower motor from a tractor-trailer and built a heater box that worked like you would not believe, when you wanted to be warm. We drove up and down the east coast for seven or eight years for vacations, and because it was geared for local runs, we could not really go much faster than 55 mph. The only problem was that there was no room in the engine compartment for an air conditioner. We had shoehorned a GM 287 in the area that was built for a straight six. I also had to replace the rear end, when the ring and pinion wore out, dual wheels to buy, etc. Then I hit a curb in Huntsville, Alabama and damaged one of the front wheel spindles. There were no replacements for a truck that old, so I sold it to someone, who took it out to Arizona to live in. It was still running a few years ago!

Then we bought another old truck, but it was actually a real camper! It was a 1968 Dodge, Del Rey Class-C. The water heater tank had ruptured and the owners wife would not ride in it. Well, that camper was like the Ritz for us. I rebuilt the rotted out floor and ceiling, and got everything sort of working, most of the time. One of the problems with the first generation Class-C motorhomes, is that everything in the camper frame was 1×1-inch studs, and the camper walls would wiggle and flex when driving, and we had to splice electrical lines in, as the original harness rotted away. There was cab air conditioning installed, but it never had been serviced before we bought it. I got an estimate of over $1,200 to replace the system. Since that was more than I had paid for the camper, that was out. But the camper had a toilet and shower. It was like paradise. Then I drove up a 20 degree incline from a dead stop while towing a boat at a campground, and burned up the transmission. One of the front brakes locked up with a bad brake line hose on the way out of the campground. The transmission would have been over $2,000, plus doing some other front-end suspension work while the tranny was out. So I sold that to a father and son, who were going to park it in the woods as a hunting camp, and let it become one with nature.

By this time, I was getting pretty fed up with fixing things, ALL OF THE TIME. So I finally broke down and bought a brand new Ford F-250! I found a 15-year-old Hornet truck camper for $1,500 and we used that camper for 15 years. It was in pretty good shape when we got it, but as it got older, things loosened up, and I was replacing the major appliances every year or two. The corner jacks ripped out of one side, when we were setting up at Fort Wilderness once, and I had to reposition the back jacks and reinforce them, because the frame was a wood/aluminum hybrid, and once you wiggled something, it stayed wiggled. We replaced the original corner hydraulic jacks, when one pulled out of the camper frame, and put in a tripod heavy-duty set, which I used an electric drill to raise and lower. The outside of the Hornet had about 50 decals and license plates attached to cover bad paint. Anyway, we were camping in New Jersey in 2014, and the propane furnace pooped-out on a 10-degree night. I had to run two space heaters, with an extra extension cord going out one of the windows for one of them. When we got home, I plugged in to run the electric heater, and got a shock from the doorknob. That was that. We got our money’s worth out of the camper, and actually enjoyed having indoor air and a real bathroom. So we finally bought our first new camper in 2015.

We purchased a 2013 Livin Lite 10-foot truck camper that had been sitting at our local RV dealer for over a year. We live in Vermont, and there are few new truck campers sold up here. The big draw for me was that there was no wood in the construction, which meant a whole lot fewer leaks or potential wiggles in the structure. The aluminum frame and outside sheathing and inside composite panels also make it a very light camper, compared to other models. We tow an old wood boat, so saving weight was a real plus. The exterior is a dark charcoal base color, with the required swirls which all the manufactures use to soften right angles. It is big inside, compared to our old Hornet, and with new appliances for the first time, I don’t need to fix things while we are on the road. Priceless. We have made many mods on the inside, to supplement the spartan design, and provide more functionality for the longer camping trips that we take. But, we discovered that the new darker exterior colors also transfer a lot of the outside heat from direct sunlight to the interior in the summer. We applied a couple coats of white reflective roof paint, and had some silver vinyl applied to the back wall and door, to help reflect the sunlight. We also have a 10-foot awning which helps.

We also noticed that the factory air conditioner also did not cycle the compressor on enough to cool the interior to what we needed. After some research, I found a YouTube video on how to adjust the thermostat, from the original factory settings. I think that some air conditioner manufactures may give a normal air conditioner a better energy rating, by lowering the time the compressor runs. Unthinkable, I know. A small hole in the side of the interior cowl and a screwdriver brought the cycling back to a more active level, when you are parked in the sun. Sometimes, you just can’t park in the shade. The camper is now much more comfortable. We have fun putting various doodads in the camper, and not just depend on the manufacturer having their interior designer make the camper better than the house you live in. We put a fast connect tie-down system in and a set of air bags to help bring the back-end up, and reduced the sway around corners a lot. Now I am having fun making it a bug-out vehicle, in case the power goes out or the world ends. Whichever comes first, we are ready.

We are very happy with our present, and probably, last camper, and we are on our third F-250 with the camper/tow package. But we have also been happy with all of our campers over the 35 years we have been active campers, and would not change a thing in our experiences. It’s been a great journey.

About Frank Mehaffey 1 Article
Frank Mehaffey is a middle school band director in St. Albans, Vermont, and has been married to his very understanding wife, Kaye forever. They split their free time between truck camping and boating. On good weeks, both!

Our Philosophy on Truck Camper Suspension Mods and Tires

Of all the questions I get, the most commonly asked is can my half-ton pickup truck haul a hard-side truck camper? Most of the time I tell them, no. The reason is that most half-ton [read more]

Truck Camper Adventure is proud to present another truck camper review written by a guest author. In this insightful and informative piece, Ryan Melvin provides us with his thoughts on the 2015 Arctic Fox 811, [read more]