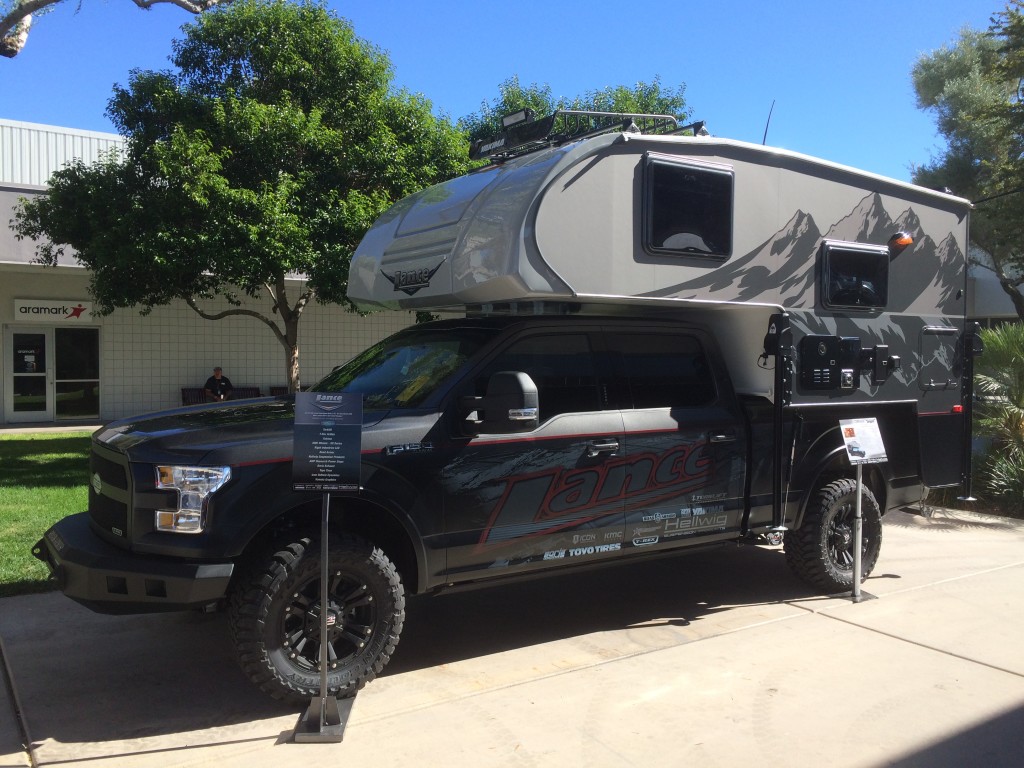 Lance Camper Manufacturing Corporation, in partnership with Hellwig Suspension Products, unveiled their new Overland Adventure Rig this month at the 2015 Specialty Equipment Market Association (SEMA) show in Las Vegas, NV. This eye-catching combo, consisting of a 2015 Ford F-150 and Lance’s brand new 2016 650 model, was the only truck camper on display at the show and consistently drew “oohs” and “ahhs” from the show’s 130,000 attendees. “I was amazed at the reception the rig received,” said Bob Rogers, Lance’s Director of Marketing. “It was really kind of neat to see from all demographics. The rig seemed to strike a chord with almost everyone,” he said.

Impressive as this rig looks, the Lance 650 is the real news here. The Lance 650 is a fully self-contained, hard-side truck camper made specifically for short-bed half-ton pickup trucks. What’s amazing about this accomplishment is that this revolutionary truck camper fits on both 5 foot and 6 foot truck bed lengths and includes a full-size wet bath with a sink, a dinette long enough to sleep an adult, and a north-south full-size queen bed. No other manufacturer has tried to do this before with a hard side truck camper let alone been successful at doing it (in 2011, Northstar came out with their superb Liberty model that could fit on both 5 foot and 6 foot truck bed lengths, but neither the bathroom nor the dinette are quite as large as those found on the 650). The base MSRP for the new Lance 650 is $19,857. This price now makes it the lowest-priced truck camper in the Lance camper lineup.

“I’m fired up to be able to market the 650 to a whole new audience of Lance prospects who already own a half-ton truck” says Rogers. “When they realize they can get a Lance camper in this size and weight, they are going to get really excited!” Bob is absolutely right. I’ve lost count how times prospective truck camper buyers have been turned-away on the truck camper forums because they couldn’t find a hard-side truck camper with a full-size wet bath that was light enough and small enough to fit on their half-ton pickup truck. When it comes to truck camper manufacturers, who for the most part have been obsessed lately with building massive, 4,000 pound campers with multiple slide-outs, bigger isn’t always better. Of course, the Lance 650 will also fit on most three-quarter-ton and one-ton short-bed pickup trucks, the lone exceptions being the lengthy, 6-foot-7.5 inch short-beds found on the Ford F-250 and F-350 pickup trucks.

The specifications of the Lance 650 make for a very capable overland adventure rig. With standard equipment, the Lance 650 weighs a measly 1,639 pounds dry and 1,842 pounds wet, less than even the recently reviewed Adventurer 80RB. The aluminum-framed camper is only 7 feet 1 inches wide and 9 feet 2 inches high. The interior floor length of the Lance 650 is 6 feet 10 inches long and offers a spacious 6 feet 9 inches of interior height. The tank sizes are fairly generous, too, at 22 gallons fresh, 15 gallons grey, and 16 gallons black. Lance engineers elected to go with a Girard tankless water heater. While you lose 6 gallons of fresh water going this route, you also eliminate 48 pounds of weight. A fair trade-off. Unfortunately, the camper has only one horizontal 20-pound propane tank and the battery compartment can accommodate just one Group-27 battery. A dual battery setup for extended boondocking would require the purchase of a Torklift Hiddenpower

to get the extra needed amp hours.

The features of the Lance 650 are equally impressive for such a “small” camper. It offers a full-size ABS wet bath with a bathroom sink, a spacious north-south queen size bed, a roomy 6-foot-4-inch-long dinette, and three Dometic European-style acrylic thermal pane windows. The camper also has plentiful storage, an audio-video system with Bluetooth and HDMI, a black tank flush, 12-volt USB charging ports, and a sleek, one-piece TPO cab-over front cap. What makes the Lance 650’s floorplan work is the unique location of the Norcold N306.3 three-way 3 cubic foot refrigerator. Unlike other campers, the Lance 650 refrigerator is in the cabover. Placing the fridge in the cabover not only gives the camper more living space below, but also gives the camper a dinette that is long enough to sleep most adults. I’m sure having the fridge in the cabover takes a bit of getting used to, but the design works and works well. 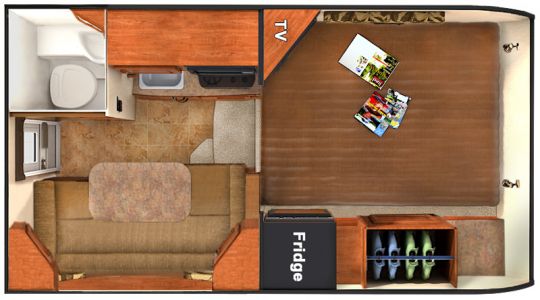 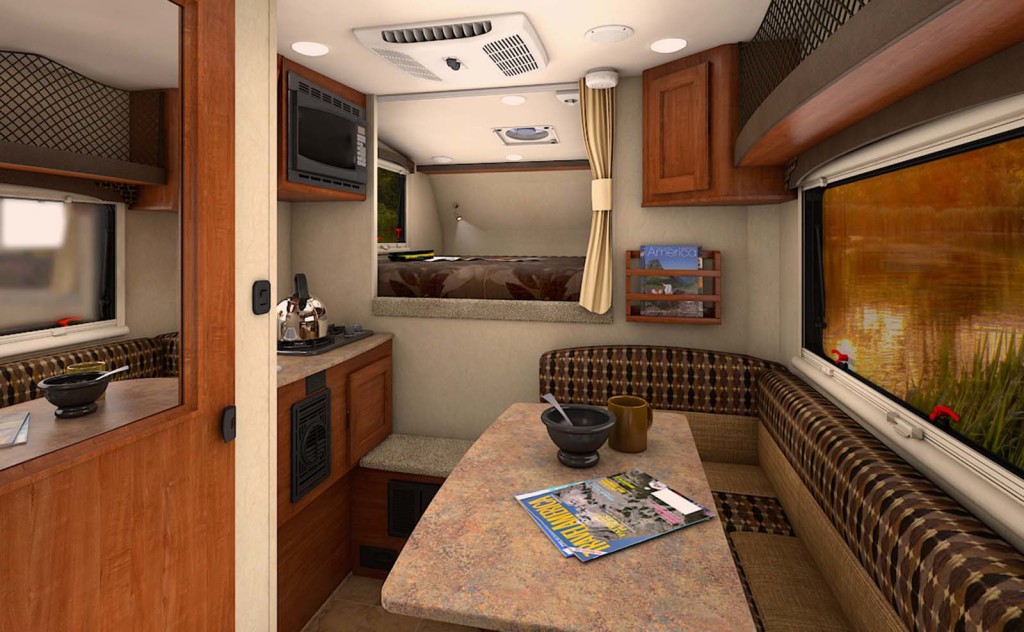 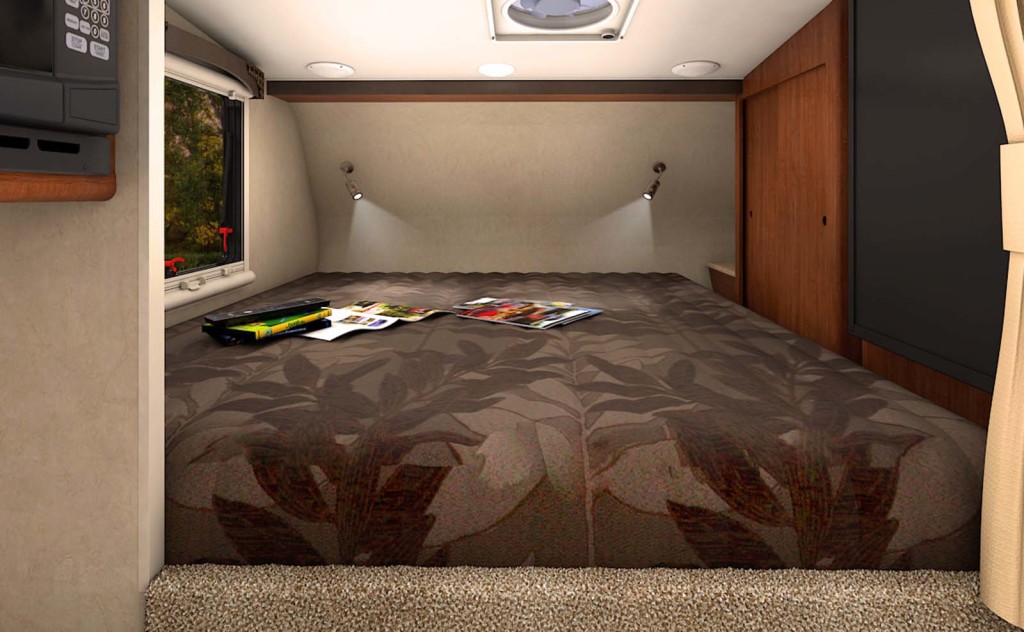 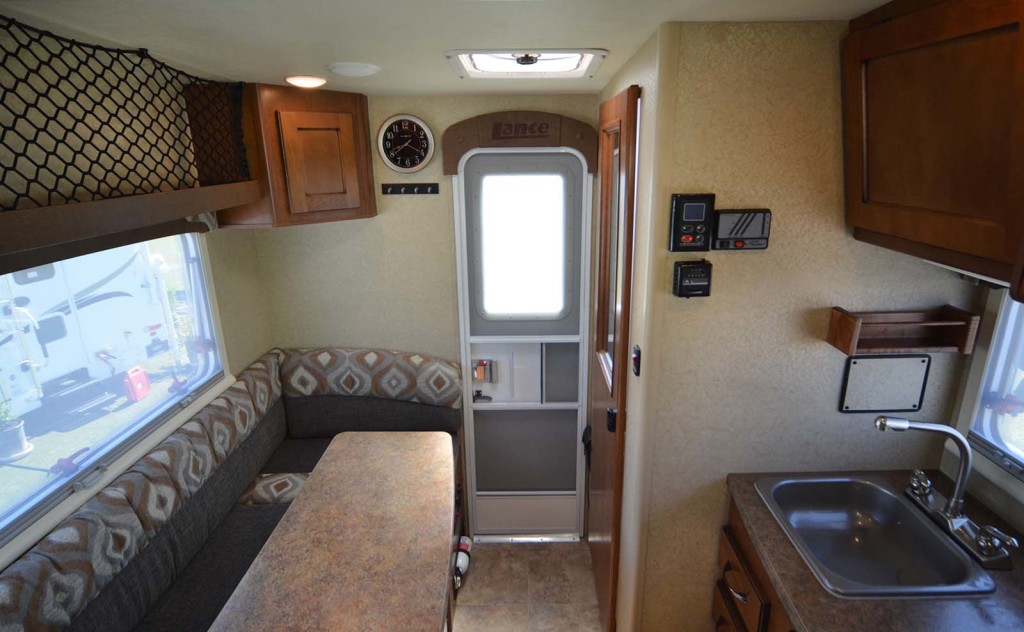 This impressive-looking combo wouldn’t work without an equally capable pickup truck. The 2015 Ford F-150 pictured here is an aluminum bodied, two-wheel drive, crew cab pickup truck with a 156 inch wheel base. It sports the popular, gas-saving 3.5L Ecoboost engine and the highly capable six-speed automatic transmission. The truck’s options include the heavy-duty payload package with 18 inch rims, the max tow package, power telescoping mirrors, and 60/40 bench seats. This F-150 has a GVWR of 7,850 pounds and offers an eye-popping 2,799 pounds of payload. As you probably know, this number exceeds the payload capacity of many three-quarter-ton pickup trucks. I usually tell folks to buy at least a three-quarter-ton pickup truck to haul a truck camper, but I might have to change that mindset now with the new Ford F-150.

To complete the Overland Adventure Rig, Lance made several upgrades to the truck. The light-weight OEM tires were ditched for a set of highly capable Toyo Open Country M/T 33×12.50R18LT tires and a set of matte black KMC XD Series 822 Monster II wheels. Several low-grade suspension modifications were made to the truck as well including a set of Icon Vehicle Dynamic Suspension shocks, a pair of Hellwig air bags, and a Hellwig sway bar for the front and rear axles. Lastly, the front of the truck was outfitted with a Road Armor stealth non-winch “Ruminator” bumper and a T-Rex upper class series grille.

Likewise, a few enhancements were made to the exterior of the camper. For this special build, Lance accented the camper in a two-tone gray wrap with an attractive mountain theme graphic. Unfortunately, Lance isn’t offering this graphics package to consumers, but according to Bob Rogers, this is something he’s working on now due to the very positive feedback he’s received, so stay tuned. As a final accent, the top of the camper was fitted with a matte black Yakima Roadwarrior roof rack for hauling gear. Bob said that the roof rack was installed for the SEMA show only, though he’s looking into providing some kind of roof rack option sometime in the future. 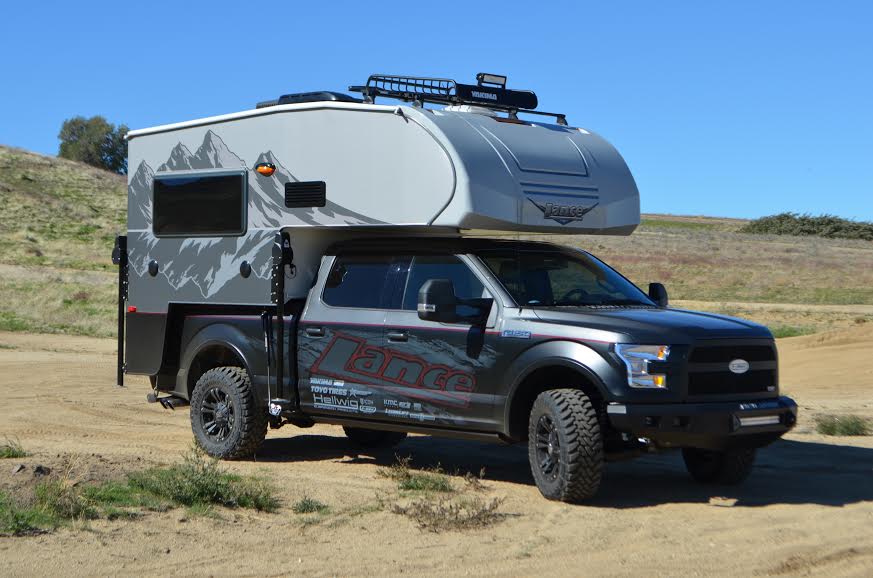 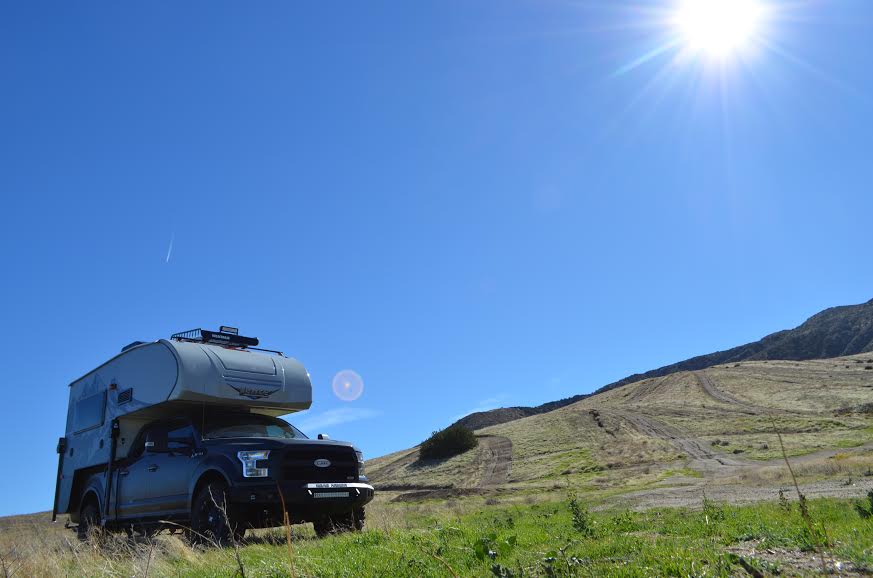 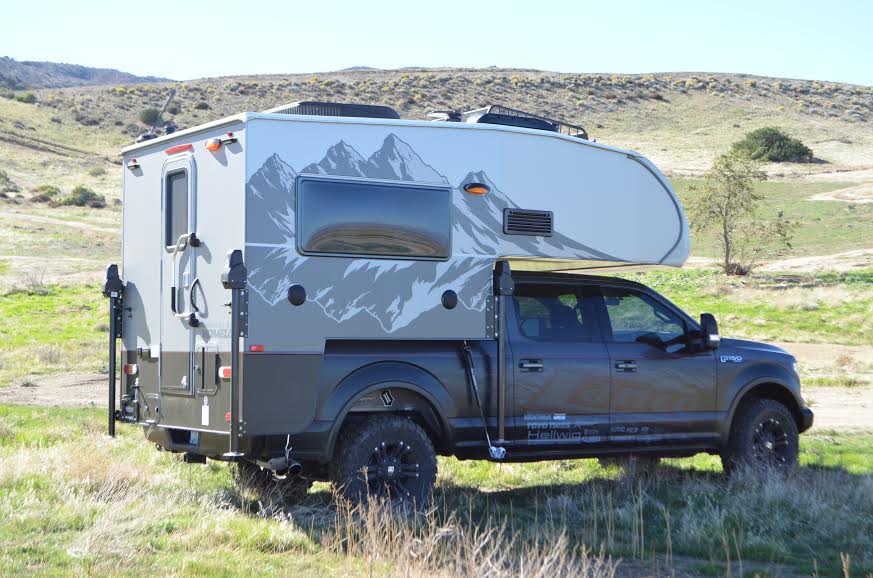 This is a fine-looking, highly capable truck camper combo. It’s good to have additional choices when it comes to building a great overland expedition rig. It’s also encouraging to see Lance expanding their light-weight truck camper lineup from two models (the Lance 825 and Lance 865) to three. Now it may be difficult for the Lance 650 to supplant the Lance 1172 as the company’s best-selling camper, but the Lance 650 has a very good chance of doing so when one considers how many half-ton pickup trucks are on today’s streets (Editor update: As of Sep 2016, the Lance 650 is the second best selling truck camper for Lance). While it’s true that not every half-ton can safely haul the Lance 650–especially the older models with insufficient payloads–the sustained popularity and number of Ford Ecoboost F-150s out there means that more folks can get into a truck camper and that’s always a good thing. It’s good for them and it’s good for the industry.

A special thanks to Rob Rogers of Lance who provided the photos and information to help make this article possible.

After wrecking our beloved 2004 Alaskan 10 cabover camper last year, we took our time looking for a replacement truck camper. Fortunately, our insurance company totaled the truck and camper, though Pres chose to salvage [read more]

Truck Camper Adventure is proud to present another truck camper review written by a guest author. In this insightful and informative piece, Michael Harris provides us with his thoughts on the 2015 ALP Adventurer 80RB, [read more]