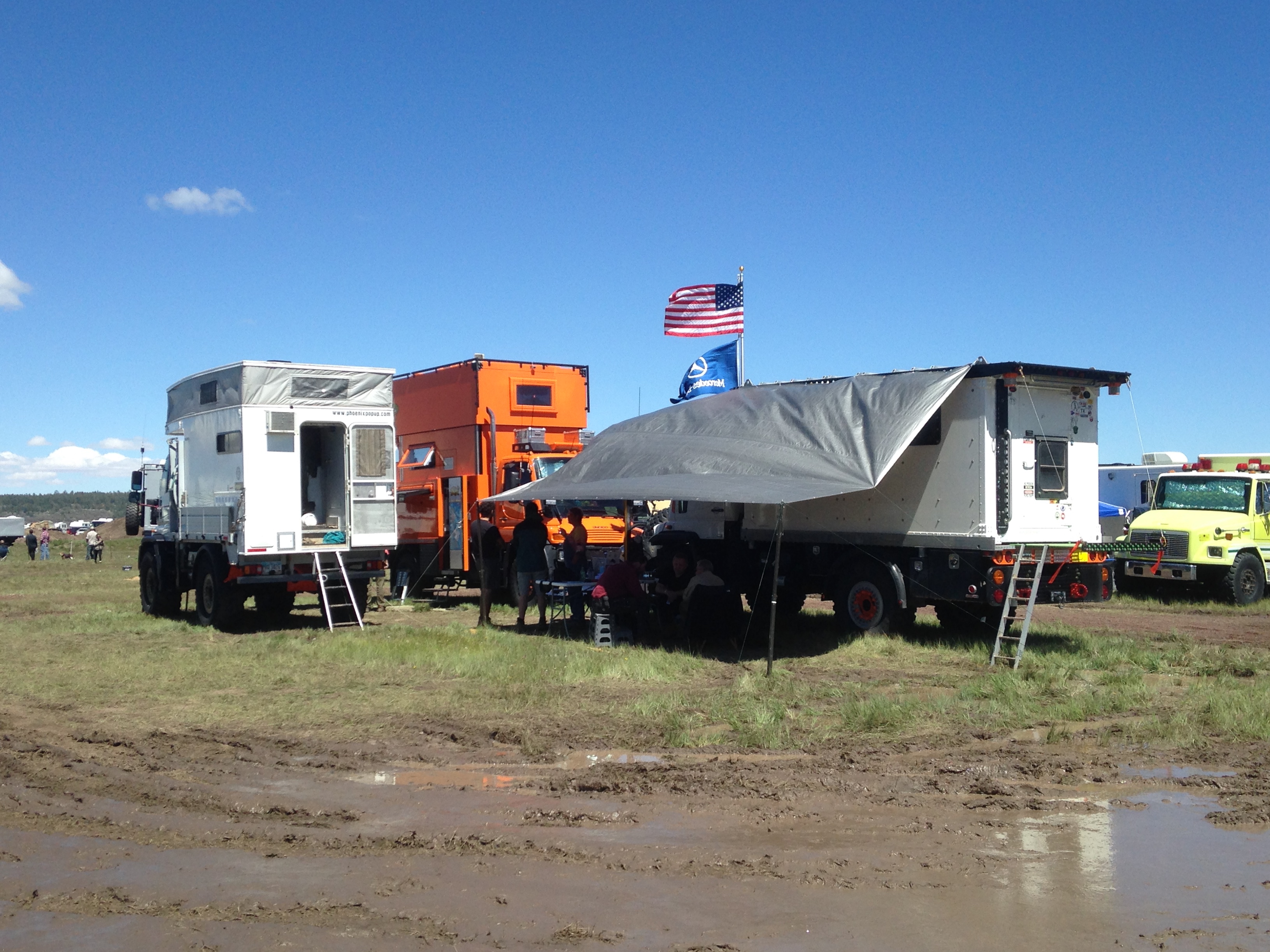 Unfortunately, the 2015 Overland Expo started out as a big flop, not due to anything the event organizers did, but because of the weather. Like the weekend before, a freak rain and snow storm hit Northern Arizona on Friday which left the event grounds on Mormon Lake a slick and muddy mess. Like previous years we camped onsite. This is usually a bright spot and part of the big appeal of attending the Expo as you get to rub elbows with fellow overland enthusiasts and look at their rigs. However, the pools of water mixed with the bentonite clay and dirt made walking around the camping area extremely difficult. Many took spills in the slippery, gooey mess. My attempt to get to the vendor area Friday afternoon resulted in a near fall myself and in the accumulation of several pounds of sticky mud to my hiking boots. We hunkered down the rest of the day Friday hoping the weather would clear up. It didn’t happen.

Saturday morning we awoke to a light dusting of snow which left Mormon Lake looking more like a winter wonderland rather than late spring. Unfortunately, rain was in forecast off-and-on the rest of the day. Those with tents on the ground were having a particularly bad time in the puddles of water and mud and many could be seen packing up. Other attendees had decided to throw in the towel, too, but many got stuck before they could make any headway and required tows to get out. Around 10:00 am we decided to take advantage of the mass exodus by relocating closer to the vendor to shorten our walk, but we quickly joined the others as we got stuck in deep pools of water and clay. Rocking back and forth did nothing as I was unable to get any traction with my standard highway tires, and having four-wheel drive didn’t help either–I only succeeded in digging the truck’s wheels deeper into the muck and mire.

At this point, I knew I was stuck and the only way I was going to get out was by using a tow strap or by using my newly installed Warn 16.5ti winch. After a failed attempt to get some traction by using some traction boards, a Good Samaritan arrived on the scene in a Ram 3500 and offered his help. It didn’t take long as the 16,500-pound-rated winch quickly extracted me from the mud that acted like a giant suction cup to my truck’s tires.

After thanking the guys who loaned us the traction boards, we made our way toward the front of the main camping area, but we were disappointed to see that there were no open parking areas in the first couple of rows. At this point, we decided to boondock nearby in the Coconino National Forest, get cleaned up, and return to the Expo the next day. You’d think that the forest road we traveled down would’ve been muddy, too, but the road was actually pretty clear and easy to travel down. We chose a nice spot to camp for the night near Lake Ashurst, about five miles from the Expo.

We returned to the Expo early Sunday morning, the last day of the event. Fortunately, the weather had cleared with blue skies and temperatures in the low 60s. We were able to meet lots of great folks and were able to take numerous pics of some of the best and most noteworthy 4×4 vehicles. Several truck camper manufactures were there with their displays including Hallmark, Phoenix Campers, and Four-Wheel Campers. At the Hallmark booth we met Mike and Joni Cash who had just purchased their first truck camper, a Hallmark K2. Mike and Joni are locals who happened to also be avid followers of this website. They recently started their own blog called Nomadacy, I encourage you to check out and follow their website.

We also got a chance to meet the owners of Phoenix Campers, Robby and Cari Rowe. Rob and Cari were great as they gave us a lengthy tour of their Fuso and Phoenix camper combo. I was impressed by how roomy their camper was and by the amount of storage (a flatbed style of truck camper might be in our future). Phoenix Campers also had two other camper designs at the show including a red behemoth that was more suited for pulling freight on the interstates rather than overlanding, but hey, it was still pretty cool to look at.

Of those who attended the show, by far the most popular vehicle was the JK Jeep Wrangler Unlimited with the Toyota FJ Cruiser a distant second. In fact, there were so many Jeeps in the show and driven by attendees that the event should’ve been called the “Overland Jeep Expo!” I took lots of pics of Jeeps which I will post later, but I’ve included a few here to wet your appetite. I also enjoyed looking at the Earth Roamers and Tiger 4×4 motorhomes. Maybe one day if I hit the lottery…

Video: The Climb Up the Murphy Hogback

During our recent three-day trek on the White Rim Trail, the climb up the Murphy Hogback was one of the highlights. The climb is fairly steep and requires 4×4 low to get to the top. [read more]

The Overland Expo West is the premier truck camper show in America. New truck campers and expedition rigs are rolled out for this big show every year, and for the 2022 show in Flagstaff, Hallmark [read more]