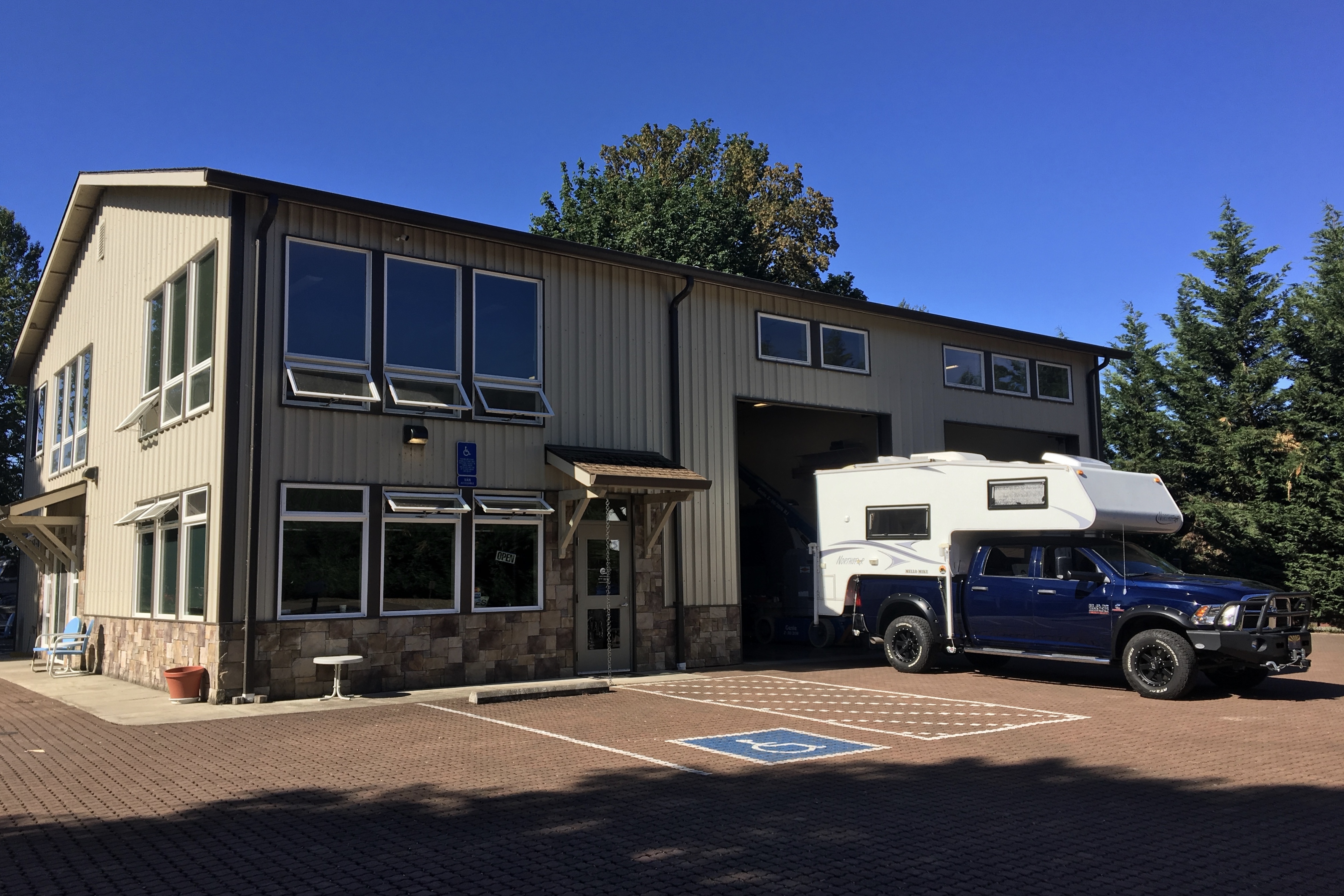 The modifications to the Truck Camper Adventure Rig continue at a rapid pace, but this time with a twist. As you know, we normally do all of the work to our camper ourselves, but two weeks ago we had AM Solar in Springfield, Oregon, do the work for us. These upgrades included the installation of a 90 watt monocrystalline solar panel on the roof, installation of an 8 AWG portable solar power plug, and a swap-out the old battery isolator in the camper for a Victron Cyrix-Li-Ct lithium battery switch. Sure, we could’ve done this electrical work ourselves, but we ran out of time before our big summer getaway, and decided that a visit to AM Solar at the beginning of the summer fit well into our schedule. AM Solar has been in business since 2002 and is widely known for providing quality RV solar installations, so it was great to finally meet the team and get the full “AM Solar” treatment.

If you’ve been keeping up with our modifications, you know that we recently installed a pair of Expion360 Viper 120 amp hour Lithium Iron Phosphate (LiFePO4) Batteries and a Go Power 1,500 watt inverter with a built-in transfer switch. Each was an important upgrade that took our rig’s electrical system to a whole, new level. Because lithium batteries offer a usable capacity of 90 percent vice 50 percent for lead-acid batteries, we essentially had doubled the battery capacity in our camper from 220/110 amp hours to 240/216 amp hours. Because of this, we wanted systems that could charge them quickly, and more effectively. Here’s what we had done:

1. New Zamp 90 Watt Long solar panel: Installing an additional solar panel is something we’ve been wanting to do for about a year. This new 90 watt monocrystalline “long panel” not only gives us a total of 330 watts on the roof, but still leaves us with plenty of room topside to perform maintenance on the roof because of the panel’s long and slender size. This additional solar panel gives us a nice boost in amperage (5 amps) and still matches well Vmp-wise with the other two panels. The 240 watts we had on the roof before provided us with a maximum of 13.5 amps in Arizona, but with this additional 90 watt panel, we’re now getting nearly 17 amps and that’s up here in the higher latitudes of Oregon and Washington. Not bad.

2. New 8 AWG solar charge plug: This is another item we’ve been wanting to add to our camper’s solar power system for several months. In a previous article, we documented a problem we were having supplementing the camper’s main solar power system with a portable solar panel. What was happening is that the charge controllers in the two systems were “dueling” with each other and generating voltages that were tricking the other controller into thinking that the batteries were completely charged. This essentially shut the “losing” system off. The solution, as we saw it, was to remove the crappy charge controller in our Renogy 100 watt portable array and plug that array directly in to the camper’s main charge controller. This new 8 AWG charge plug allows us to do that and gives our solar power system a total of 430 watts when we use the portable array. This portable panel will especially come in handy during the winter months when the sun tracks lower in the southern sky.

Overall, our time at AM Solar was great. The AM Solar team is comprised of professionals who are very knowledgeable about RV electrical systems and even designed several systems specifically for truck campers. If you need extensive work done to your RV and you’re not comfortable with the level of your knowledge, then I wouldn’t hesitate to give AM Solar a call. In addition, to the work we had done, they also upgraded some of the solar power and alternator circuit wiring and connections done at the Northstar factory. Nothing major, but it’s the little things that sometimes make a big difference in how a system performs.

In addition to AM Solar’s upgrades, we were able to learn a few valuable things about solar power installations and testing while we were there. One tool that AM Solar uses to calculate solar power efficiency is a hand-held device called a Daystar DS-05A Solar Power Meter The readout of the meter, which measures the amount of natural sunlight present at any one time, is compared with the RV’s solar power output to determine the system’s overall efficiency. Here are the numbers Sean ran for my system:

As you can see, our upgraded solar power system passed with flying colors!

One other thing about our visit to AM Solar. Because the work we had done was somewhat extensive, we had to stay in a hotel room for a couple of nights (yuck!). We ended up staying at a dive called the Village Inn, which is about a mile from AM Solar’s location. With a drive less than five minutes, the hotel’s proximity to AM Solar is a bonus, but I still wouldn’t recommend it. The carpet was filthy and stained and the room stank of cigarette smoke. The rooms are reasonably priced at around $77 with tax, but not if you have a dog like us. If you bring along Fido, you’ll have to pay an extra $25 pet fee per night, which puts you at around $102 a night. Not worth it. Fortunately, Mitchell Boyer, who is one of the owners at AM Solar, just opened an airBNB, which after looking at the photos, is ions better than the dive we stayed at plus Mitchell told us he will be charging less. I wish we known about Mitchell’s airBNB before we booked reservations at the Fleabag Inn. 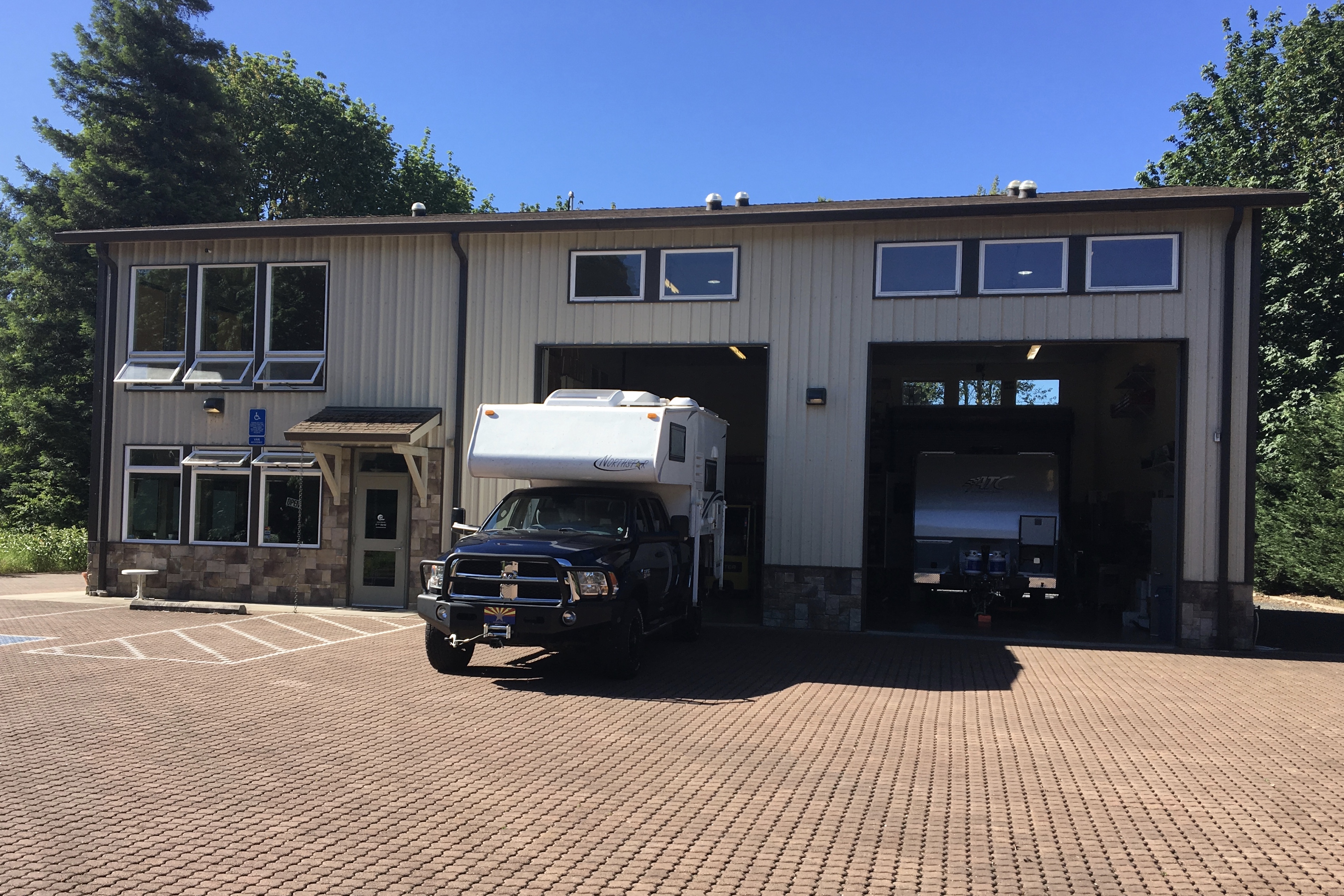 Getting Your Rig Zamped: Solar Power for Your Truck Camper

The meteoric rise of Zamp Solar is one of the great stories in American business. Started by entrepreneurs, Steve Nelson and John Yozamp, in 2010, the two began selling solar power kits on eBay out [read more]