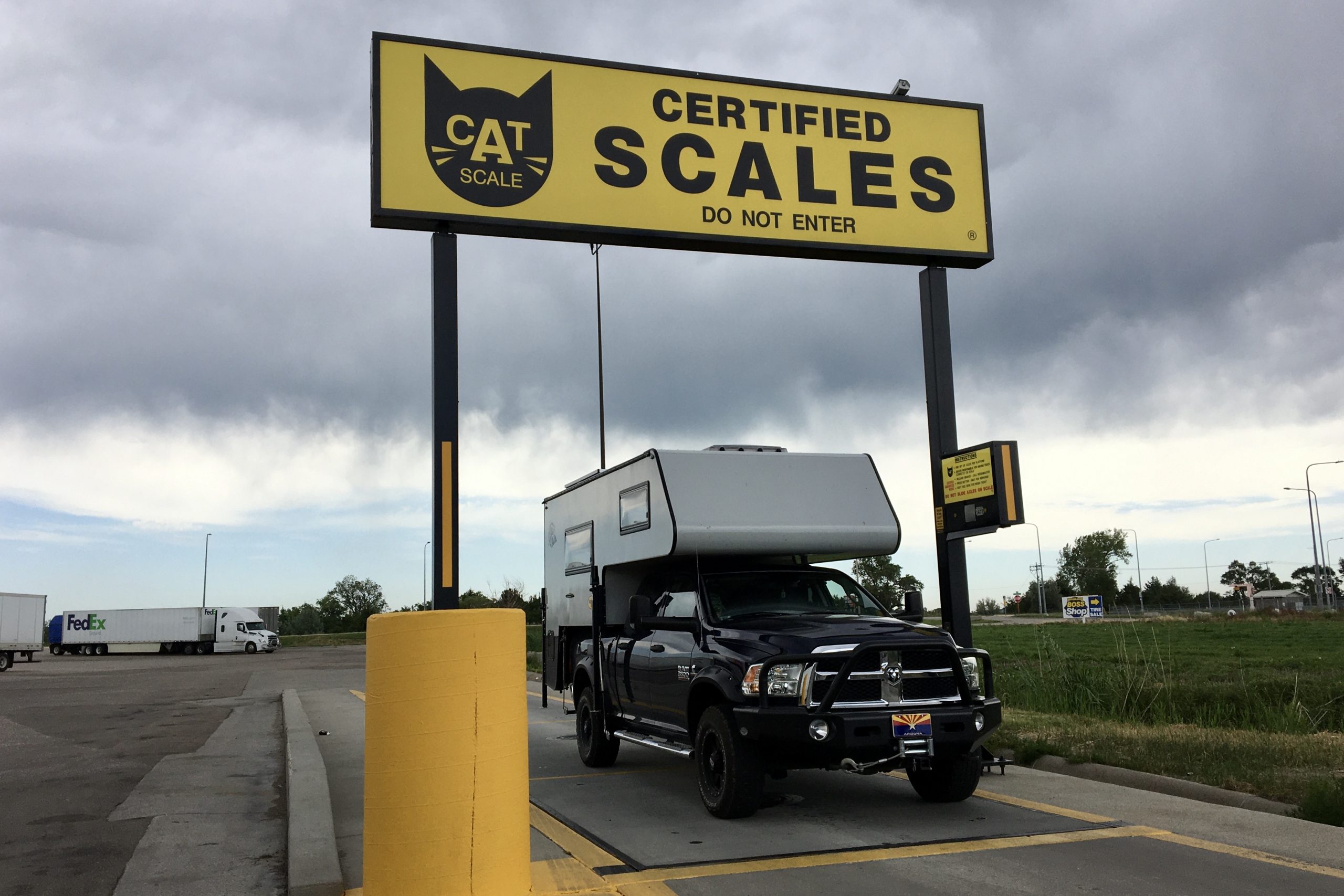 After spending over a week thoroughly testing every system in our brand-new Bundutec Roadrunner truck camper, it was time to finally take the CAT Scale challenge. Getting your rig weighed tells you a lot. The three figures, consisting of the two axle weights plus the total weight of the rig, not only will tell you how much your camper weighs, but also your truck. The figures will also tell you how much gear and other stuff you are hauling. Most people are shocked the first time they get their rig weighed because of half-truths perpetuated by salesmen and official sales literature. This is why it’s best to do business with a knowledgeable dealership or manufacturer that you can trust.

We prefer using a Certified Automated Truck (CAT) Scale when weighing our rig, but any certified truck scale will do. CAT Scales can be found in over 1,900 locations throughout the United States and Canada, primarily at Interstate truck stops. Getting your rig weighed is easy. All you have to do is pull up to the scale, push the button to talk to the operator, get weighed, pay, then receive your official weight slip in the scale office. The entire process takes just a few minutes and costs only $12. Owners should take their truck to the scale first then have their truck and camper weighed together later to determine the actual weight of the camper. Be mindful to duplicate important fluid levels like fresh water and diesel/gas when obtaining these numbers.

We’ve gone through this process several times with travel trailers and truck campers, but we were still a little surprised at the initial weigh-in numbers for the Roadrunner. Our rig, consisting of a 2013 Ram 3500 SRW 4×4 with a 6.7L Cummins diesel and our brand-new Roadrunner, weighed a hefty 12,180 pounds (front axle 5,460 pounds, rear axle 6,720 pounds). The total weight included a full, 30-gallon diesel tank, lots of gear, and two passengers. Subtracting the truck’s fully loaded weight puts the fully loaded weight of the camper at about 3,300 pounds (the official dry weight of the camper is 2,450 pounds). For us, the fully loaded camper weight consisted not only of several options like two 170-watt solar panels and a roof top air conditioner, but also things like food, camping gear, clothing, batteries, and a full fresh water holding tank.

As for the fully-loaded total weight of the rig, we are slightly over the 11,700-pound GVWR of our truck at 12,180 pounds (later models of Ram 3500’s have a 12,300-pound GVWR), yet we are still under the GAWRs of the axles (6,000 pounds front; 7,000 pounds rear) and the weight ratings of the wheels and tires. How did we go over our 11,700-pound GVWR and 3,809-pound payload rating? Obviously, the camper is the big one, but truck camper options and how we loaded-up the truck is another. We decided to weigh our rig under a worse-case scenario with a fully-loaded camper. This included a full water tank, which we rarely do, and tons of canned goods. We also had the truck loaded with all kinds of gear for the cross-country trip to pickup the new camper. 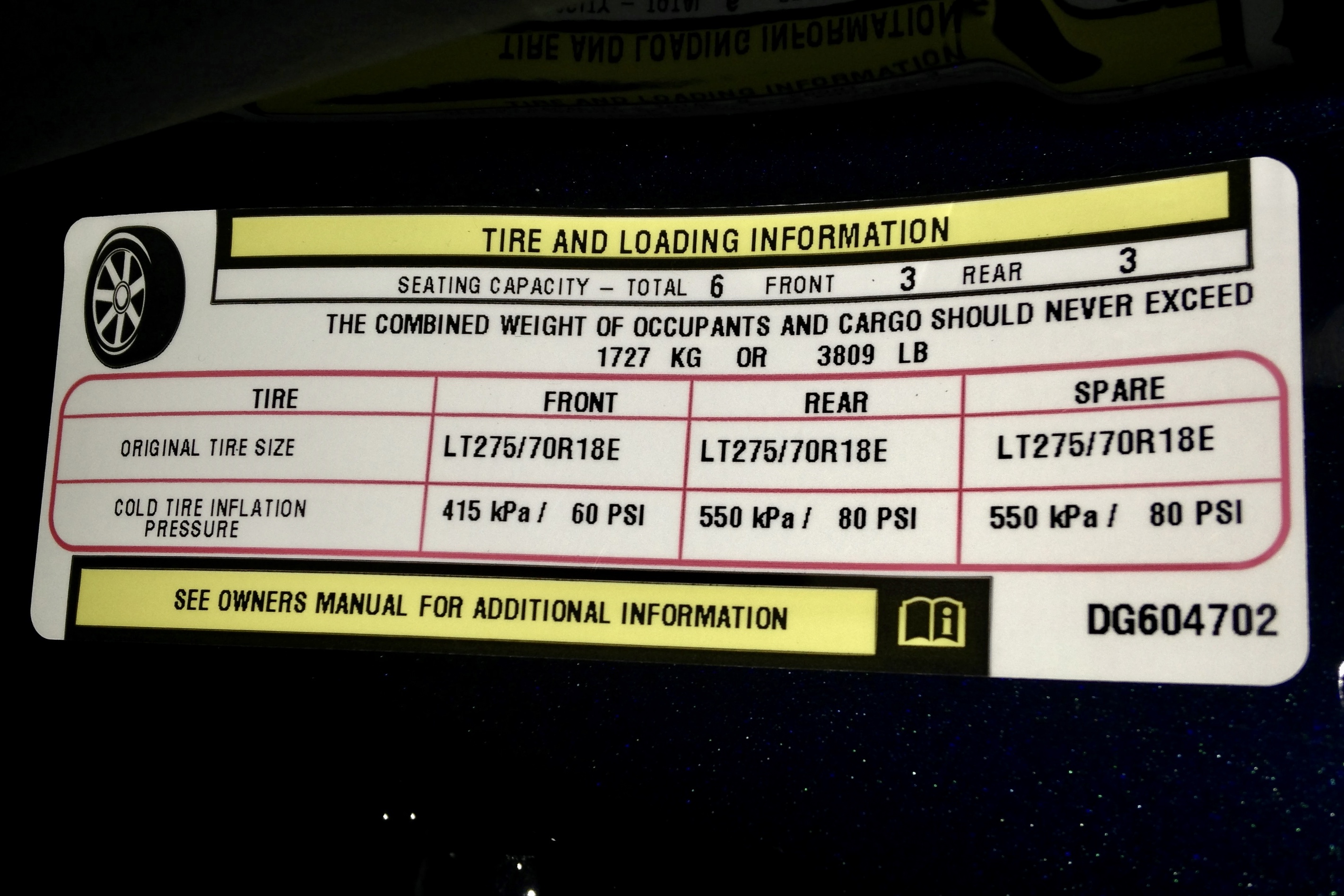 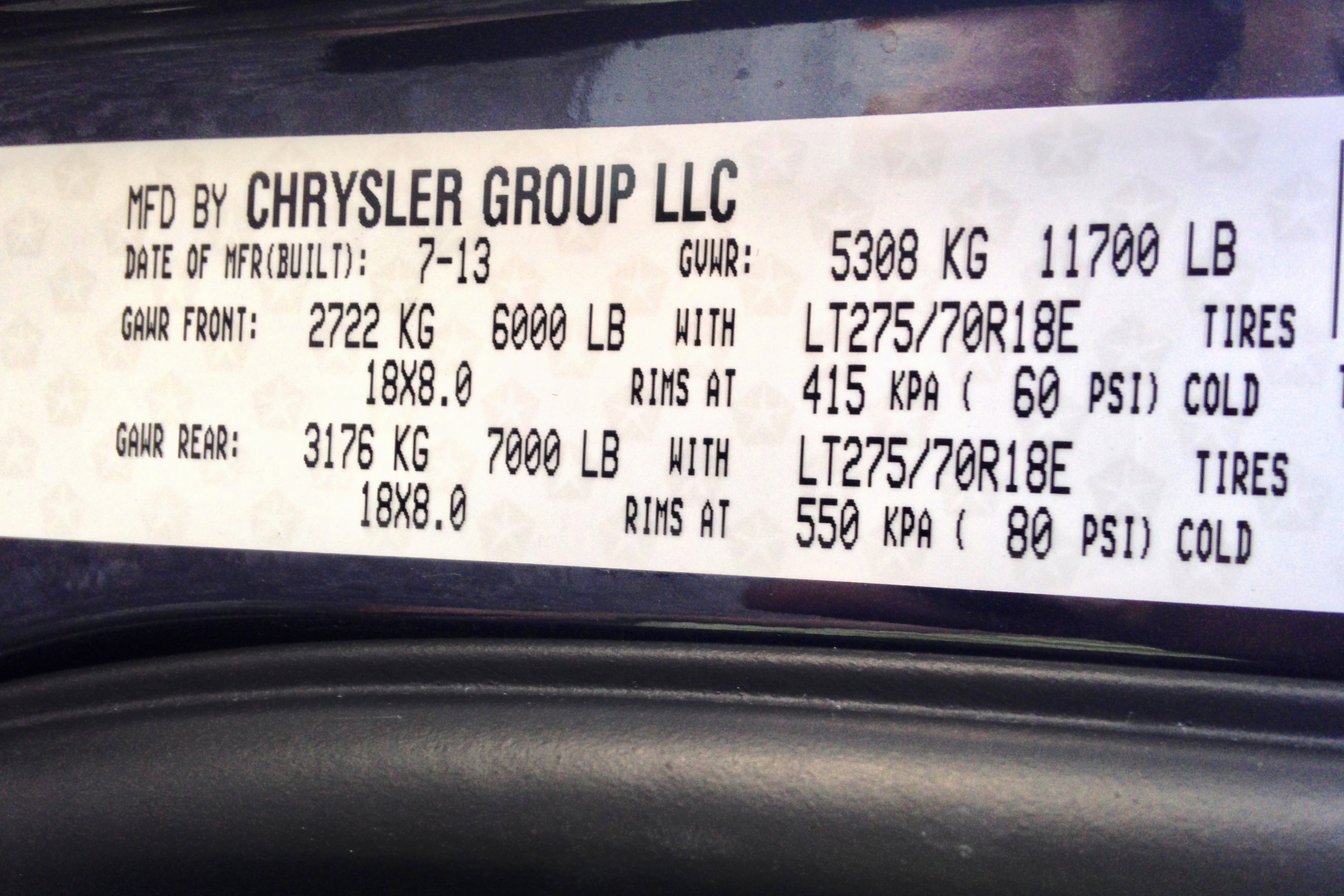 So what’s the moral of the story? Be mindful of weight when building-out your truck. Most of us focus on just the truck camper and truck camper options, but aftermarket truck options can add up just as quick when it comes to the total weight of your rig. Things like winch bumpers, spring packs, and towing assemblies can put a serious dent in the payload rating of your truck. For instance, here are the weights of the aftermarket upgrades made to our truck:

That’s a total of 508 pounds of additional weight! Subtracting this weight from the 12,180-pound CAT Scale total puts us 33 pounds under the 11,700-pound GVWR of our truck. This provides yet another example of how important it is to buy the right truck from the start. Putting some of these options on a 3/4-ton or a half-ton would hammer the already wanting payload ratings of these trucks. Of course, traveling with less gear and less potable water also helps reduce the total weight. Our 35-gallon water tank alone weighs a whopping 290.5 pounds when full.

When shopping for a truck, we recommend taking a hard look at factory options as well. Yes, having a shiny, new diesel engine underneath that hood is great, but consider how much more weight that engine will place on your truck’s frame and how much having it will reduce your truck’s payload. For instance, the 6.7L Ford Powerstroke diesel weighs 1,100 pounds wet compared to Ford’s 6.2L V8 gas engine, which weighs nearly half that at 600 pounds. The same applies to 4WD. That feature, while great for driving in deep sand and snow, will add another 400 pounds to the weight to your truck, reducing your payload even more. Oh, and don’t forget to subtract 55 pounds for the weight of your tailgate. That’s a plus you won’t want to forget when calculating the overall weight of your rig.

While we discourage exceeding the GVWR/payload rating of your truck, there is one little-known trick employed by more knowledgeable pickup truck owner’s to squeeze out even more cargo hauling capability out of their trucks. This involves the Gross Axle Weight Ratings (GAWRs) of each truck. The GAWRs listed on each truck’s payload sticker are greatly limited by the OEM tires. If you research the actual GAWRs with the axle manufacturer you’ll probably be surprised to learn that you have several hundreds, if not thousands, of additional pounds of cargo carrying capacity (this is especially true with the AAM 11.5 rear axle found on our truck, which has a 10,000-pound GAWR rating, 3,000 pounds more than the GAWR given by FCA). You can tap into this additional cargo carrying capacity by simply buying better wheels and tires with higher load ratings. For example, the 275/70R18E Cooper Discoverer AT-XLT tires we bought for our truck have a 3,640 pound load rating; the Ion rims, 4,000 pounds each. Wheels and tires rated even higher than these can be purchased.

What else can you do to avoid an unpleasant surprise at the CAT Scale? When shopping for a camper, Truck Camper Adventure recommends that you add 1,000 pounds to the dry weight of your hard-side camper; 500 pounds to the dry weight of your pop-up. Why? Because the unloaded “dry” weight provided by Truck camper manufacturers doesn’t tell the entire story. This is because the dry weight reflects the weight of the camper with standard features only. It doesn’t include installed options, like air conditioners and solar panels, and never includes things like batteries, a full fresh water holding tank, full propane tanks, food, clothing, cookware, utensils, and camping gear. Never buy a truck camper based upon the manufacturer’s listed dry weights alone. This often-used rule of thumb works surprisingly well for truck camper owners and has proven to be a pretty accurate barometer when going to scales. It did for us.

Have you had your truck camper rig weighed at a certified scale yet? If you have, let us know if your weights met or exceeded your expectations. We’d love to hear from you. 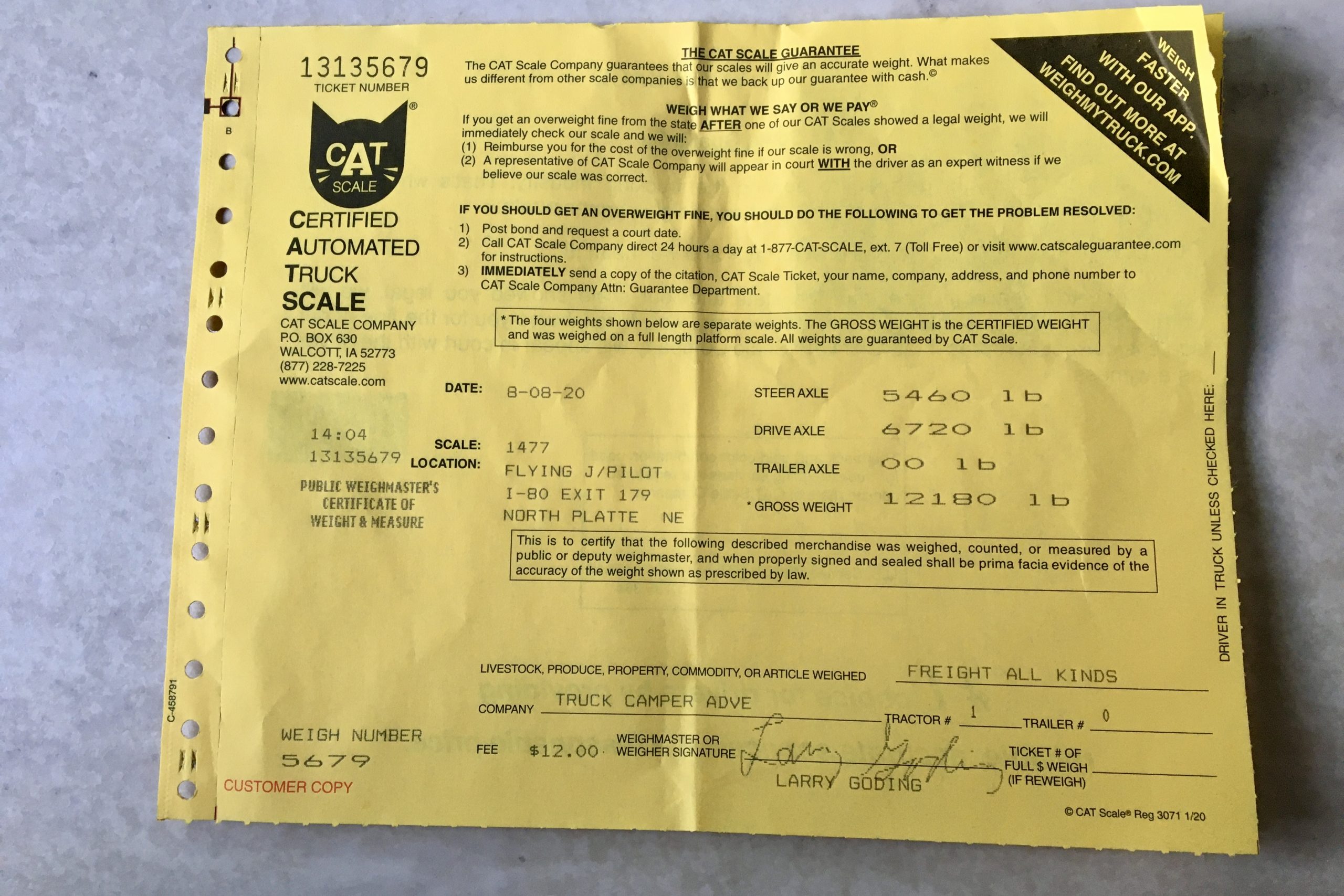 One of the great things about this website is the interaction I get with readers. One question asked of me several times during 2014 is why I bought a new truck just two years after [read more]

If you’re reading this article you’re probably either a new truck camper owner or a person who is seriously thinking about buying one. Whatever your situation, the truck camper is a great choice with loads [read more]

Choosing the Best Truck for Your Truck Camper (Updated)

Buying a new truck in today’s economy is a big deal. Depending on options and trim lines, a new truck can easily cost you well over $80,000. So before you pluck down those bucks, you [read more]