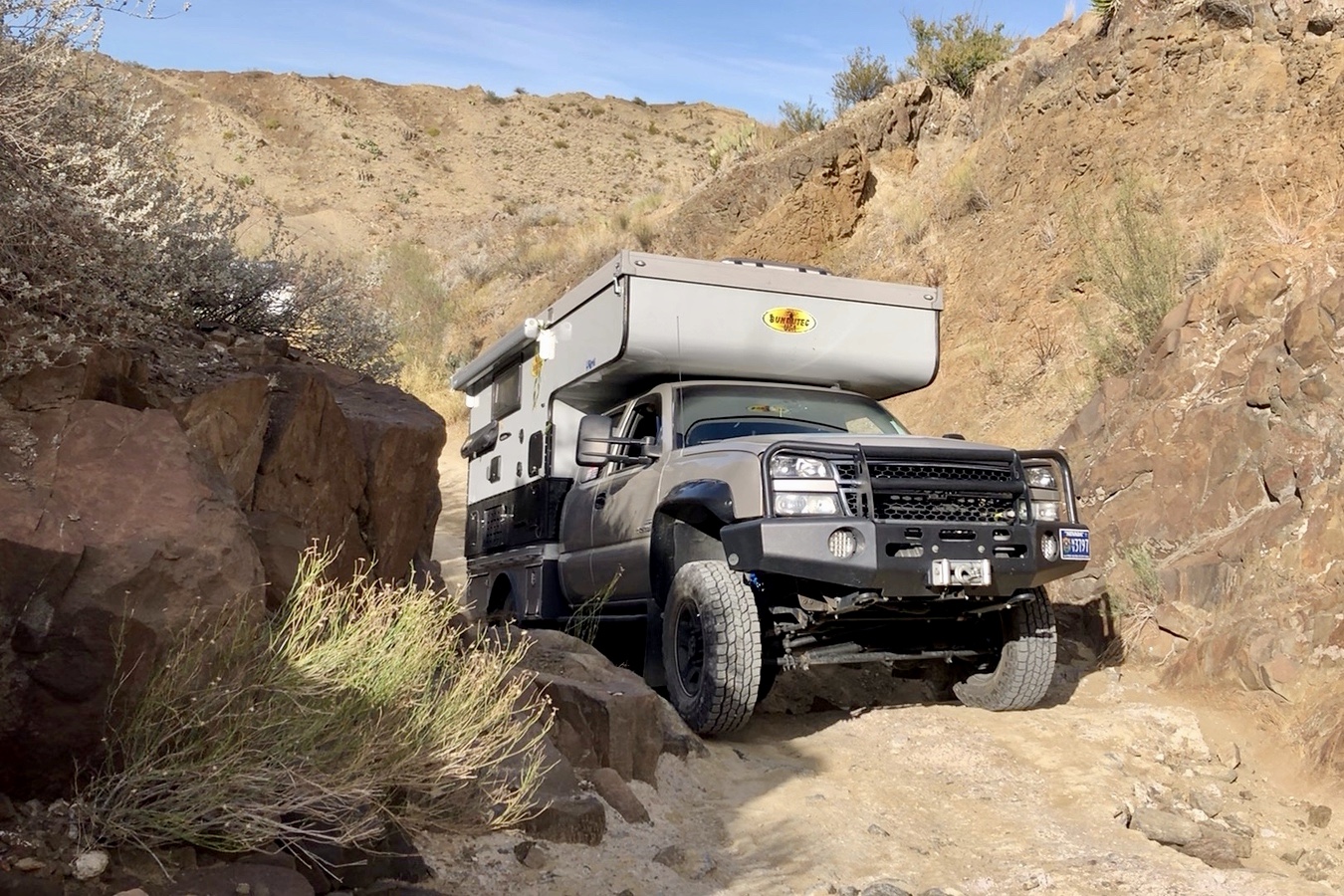 Big Bend National Park.  If you have been paying attention in the last few years, Big Bend keeps popping up as a National Park that you need to visit. We had read several blogs and other articles here on visiting the park and we found ourselves with the opportunity to make that happen. The original plan was to cross the Mexican border at Brownsville and travel into mainland Mexico. However, we were denied due to the gross weight rating of our truck exceeding the 7,000 pounds that Mexico allows for pickup trucks wishing to get a Temporary Import Permit. We were unsuccessful in pleading our case at the border and made several attempts to obtain the permit online; however, the system kept kicking us out and locking up. On to plan “M” at this point.

Since we were already in the area, we decided to make our way towards Big Bend to see what it was all about. We have traveled extensively in the Southwest and soon found familiarity as we entered the area. Our first stop was the Panther Junction Visitor Center to obtain our backcountry pass and camping permits. We were visiting at the end of November and the week before Thanksgiving, and were not prepared for the number of people already there. As we made our way to the room where you obtain your permit, we had a wait ahead of us. We had never been and were winging it. As we looked at the board, we could see which camp spots had been taken and were being taken as we watched. We looked at the map and began picking out a few possibilities.

It was finally our turn. We approached the park ranger and discussed our options. It was after lunch and we did not want to have to travel to the other side of the park to find a spot. We saw a spot that according to the board and map seem to fit the bill, the Elephant Tusk primitive campsite. According to the map, it was a fairly short drive from the visitor center and located on Black Gap Road. Black Gap Road was marked on the map as “not maintained.”

We tend to seek out the roads less traveled and thought that after having been on most every road in Death Valley National Park, how bad could it be for a road in a national park? There was a “long” way around that was on better maintained roads or the more direct way. The ranger tried to convince us that we should take the long way around as Black Gap Road was “pretty rough.” He questioned us about our truck and how it was equipped. I explained that we were sitting on 35-inch tires and the truck was very capable. He seemed satisfied and so we had our first spot for the night. Let’s do this.

We took the paved road to the southeast of the visitor center with our permits and map in hand. We soon found the turn-off for Glenn Springs Road and hit the dirt in our Bundutec Free flatbed truck camper. 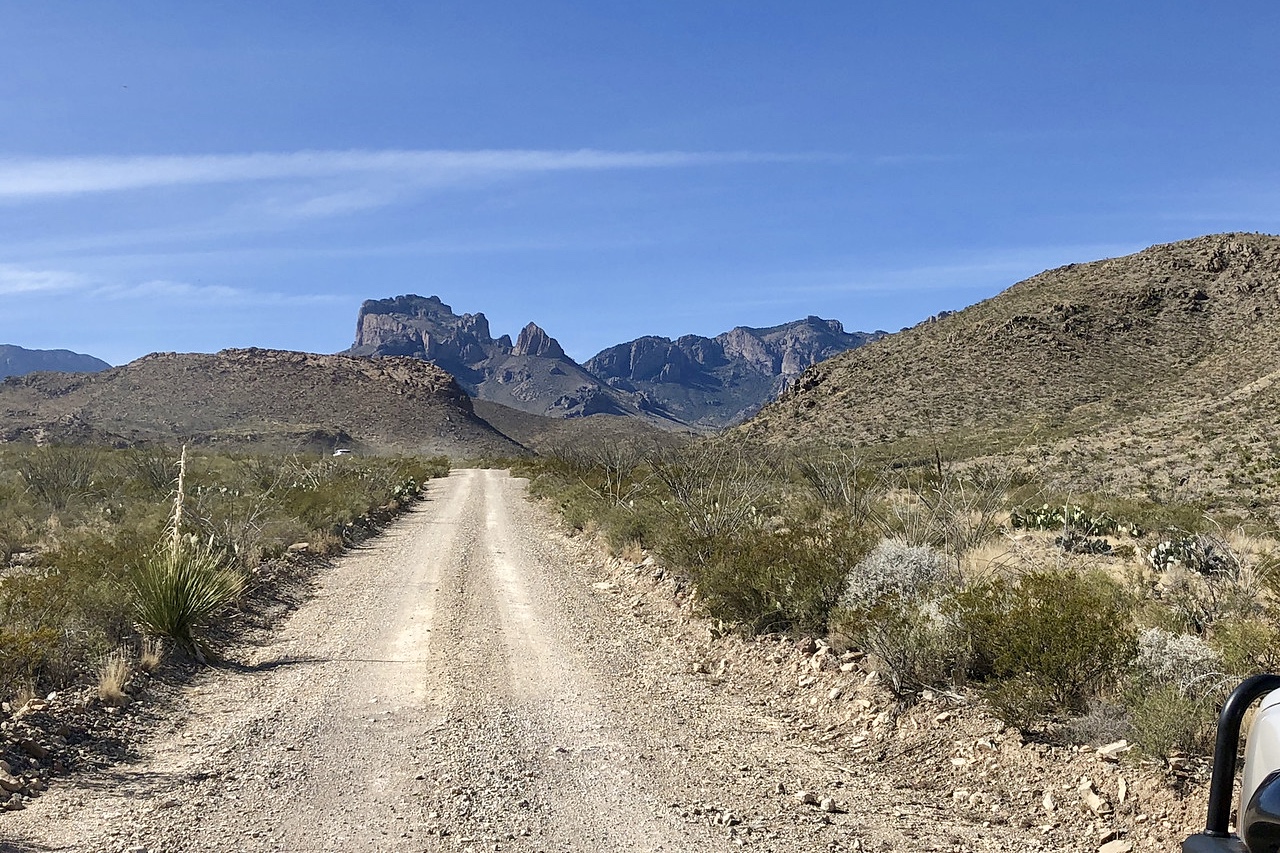 We made our way down Glenn Springs Road for approximately one mile before deciding that we wanted to air down for comfort. We dropped the pressure down to around 35 psi in the front tires and 40 psi for the rear tires. Now that the tires were deflated, it was time to continue and keep on the lookout for our turn off for Black Gap Road. Just after reaching Glenn Spring campground, we found our turn off. As with most water sources in the desert, there was vegetation. 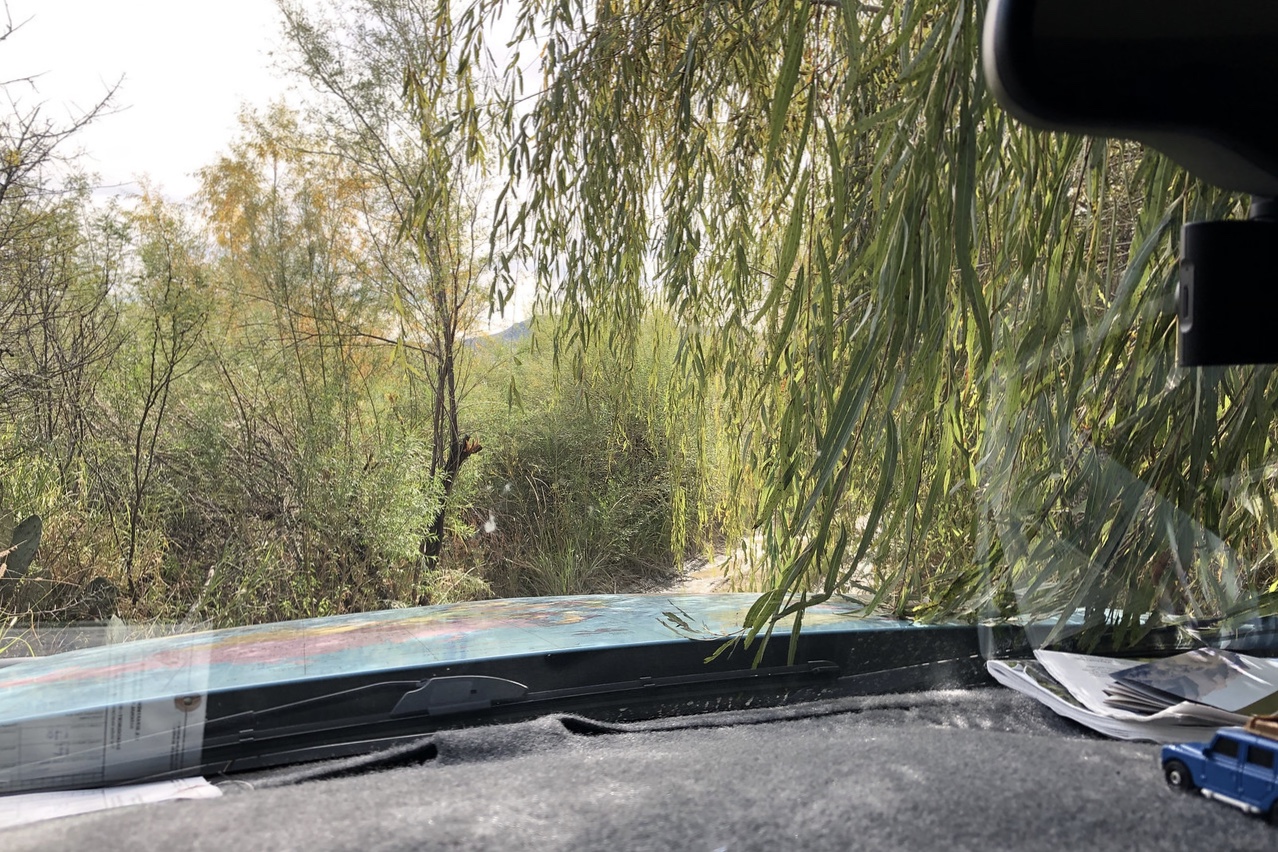 We happen to take a bit of the vegetation with us as we maneuvered through the trees and other willows before crossing the water and making our way out and onto the other side. If you don’t like pinstriping on either your truck or camper, avoid this road.  We added a few more to ours as we were probably the biggest thing to cross through this section of road in quite some time.

Once through the spring, we found ourselves back to the normal flora that is common in this area. The road changes elevation throughout its length and we were rewarded with picture-worthy vistas as we made our way along the route. At this point we thought that perhaps we had seen the worst of it as this section was in pretty good shape. 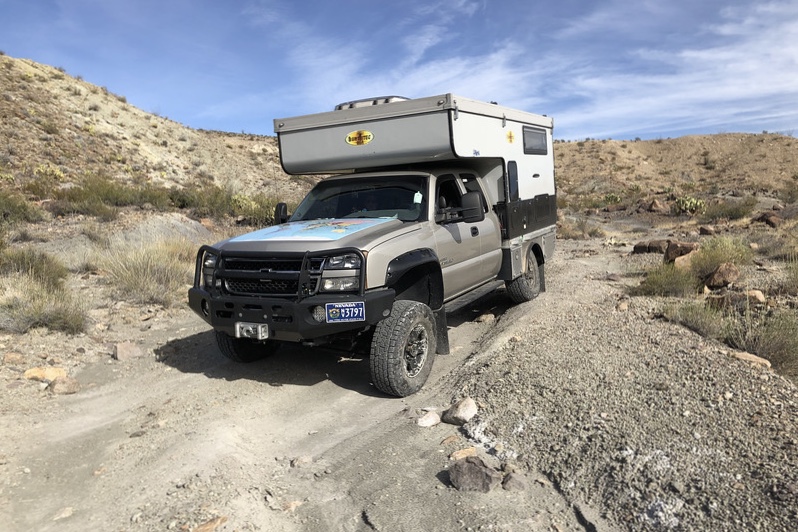 Shortly after taking the previous picture, we met our next challenge. Time for a little scouting and route planning as the drop offs were big enough to cause damage if taken poorly. Once we decided on a line, my wife guided me down. We made it down unscathed and continued on our way. We met a motorcycle heading to other way. The rider gave us a look as if he couldn’t believe we were there and perhaps we didn’t know what we getting ourselves into. 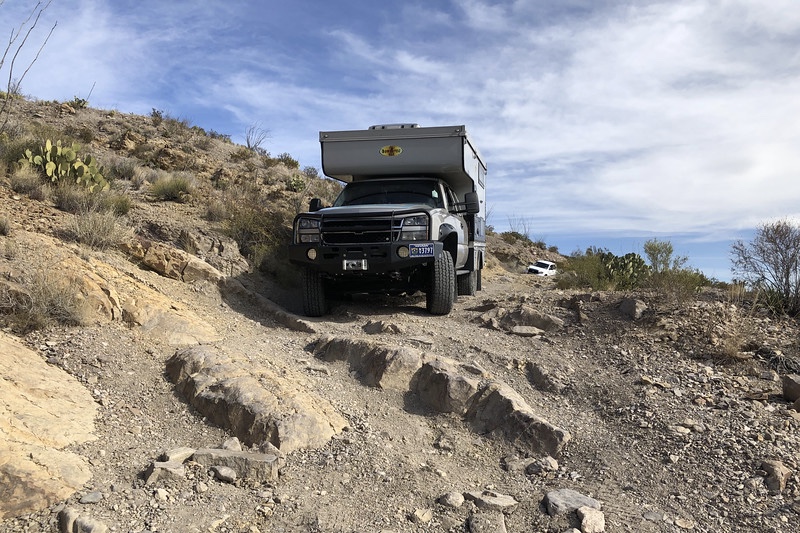 After working our way down off of the plateau, we crossed the dry river and had reached the low point of the trail and began our climb back up the other side. It was more switchbacks and washouts that gave the suspension plenty of opportunities to flex. This was low range terrain and we were taking our time and picking our lines carefully.

Then we turned the corner and entered a small canyon with a water fall looking obstacle. There were boulders stacked at the bottom of what looked like a pretty serious climb. It was time to get out and do some spotting again. When you are packing your home on your back and driving through a canyon, there aren’t too many options, but we figured out the line that would ensure the most success and minimize (hopefully prevent) any damage. I even took a moment to identify any potential winch anchor spots. With nothing left to do but give it a go, my wife remained at the top to act as my spotter as I engaged the front locker and eased up the climb following her directions. 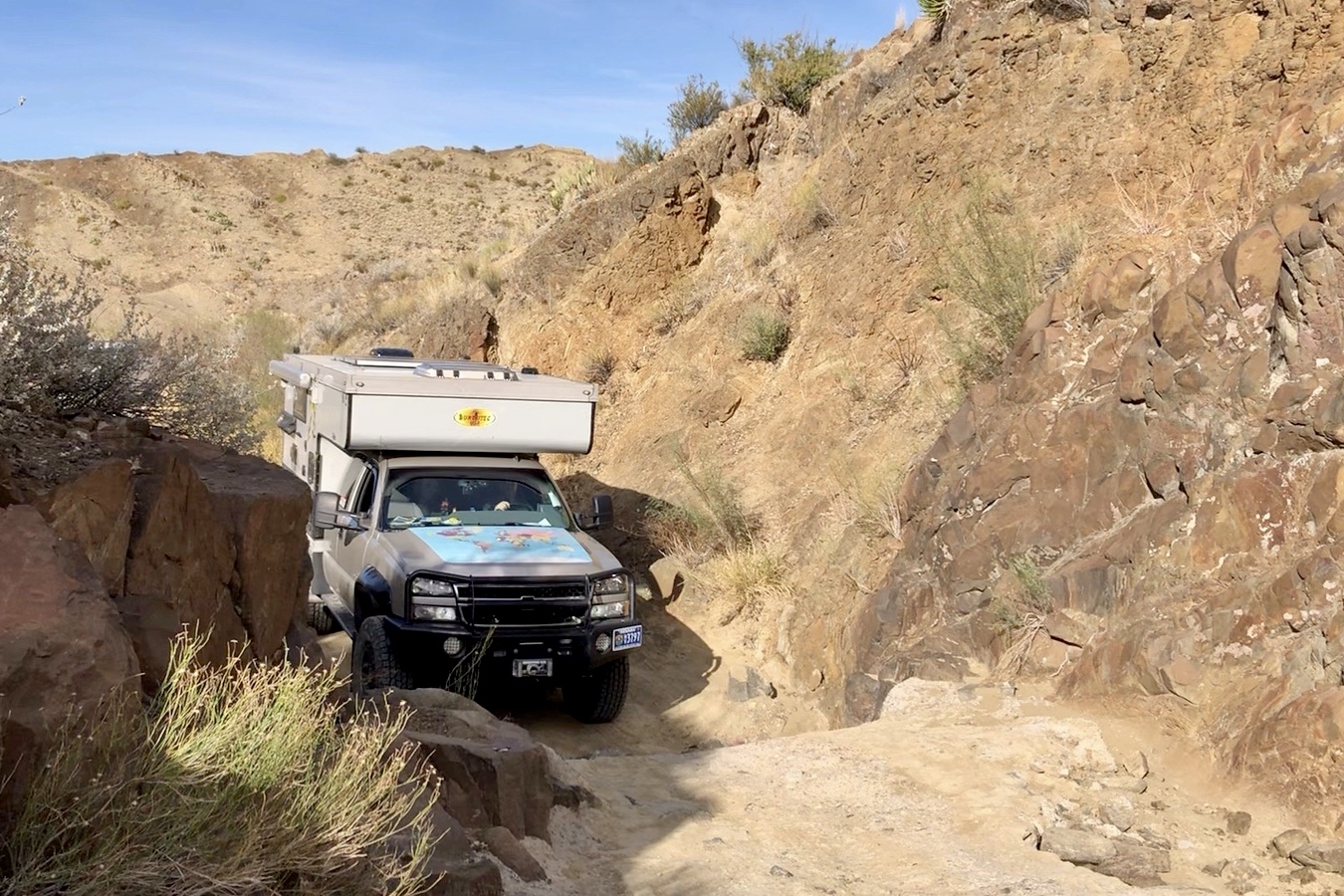 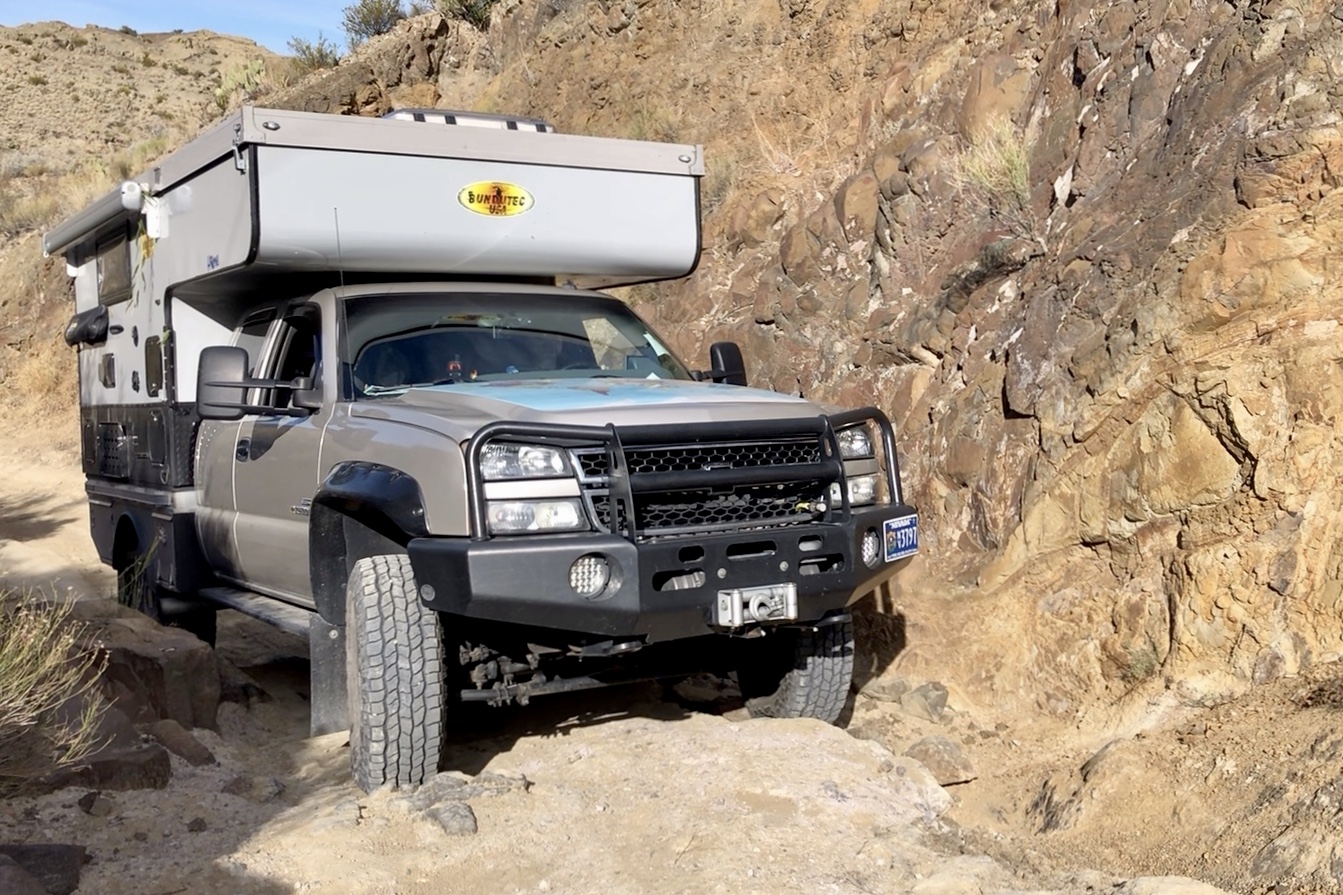 And just like that, we went up the obstacle. I have to admit that I was seriously impressed as the truck climbed without any tire slippage, and even better; no damage. We remained on site to assist the truck that had caught up to us. I was able to help him pick his line and he too climbed with only minor re-adjustments.

After that, it was just a matter of continuing the climb out of the canyon. We made it to camp and decided that it was time to use our Bundutec Quick EnSuite Shower Enclosure. 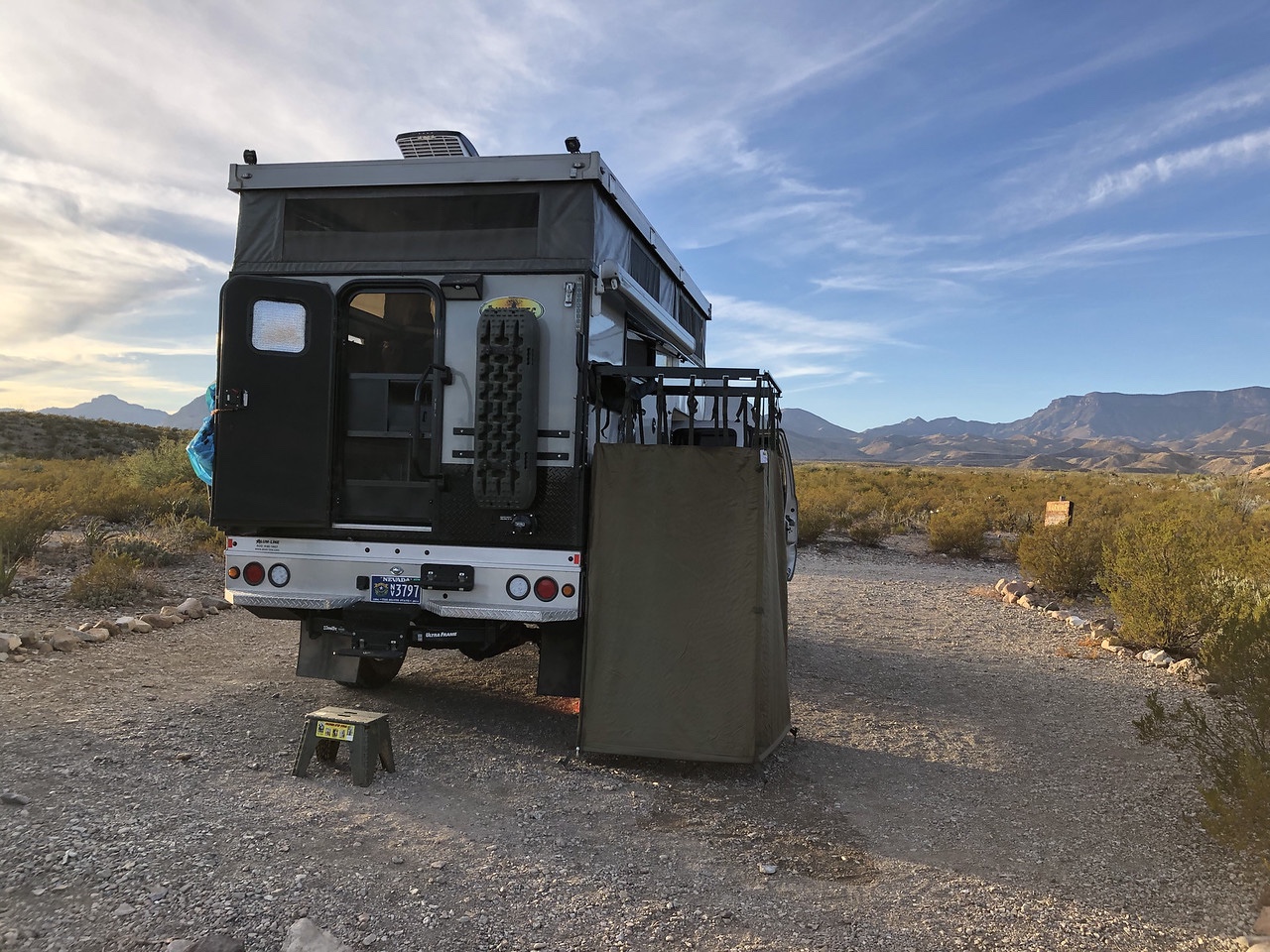 Of course this is the sign just in front of our camp spot with Black Gap Road disappearing in the distance. 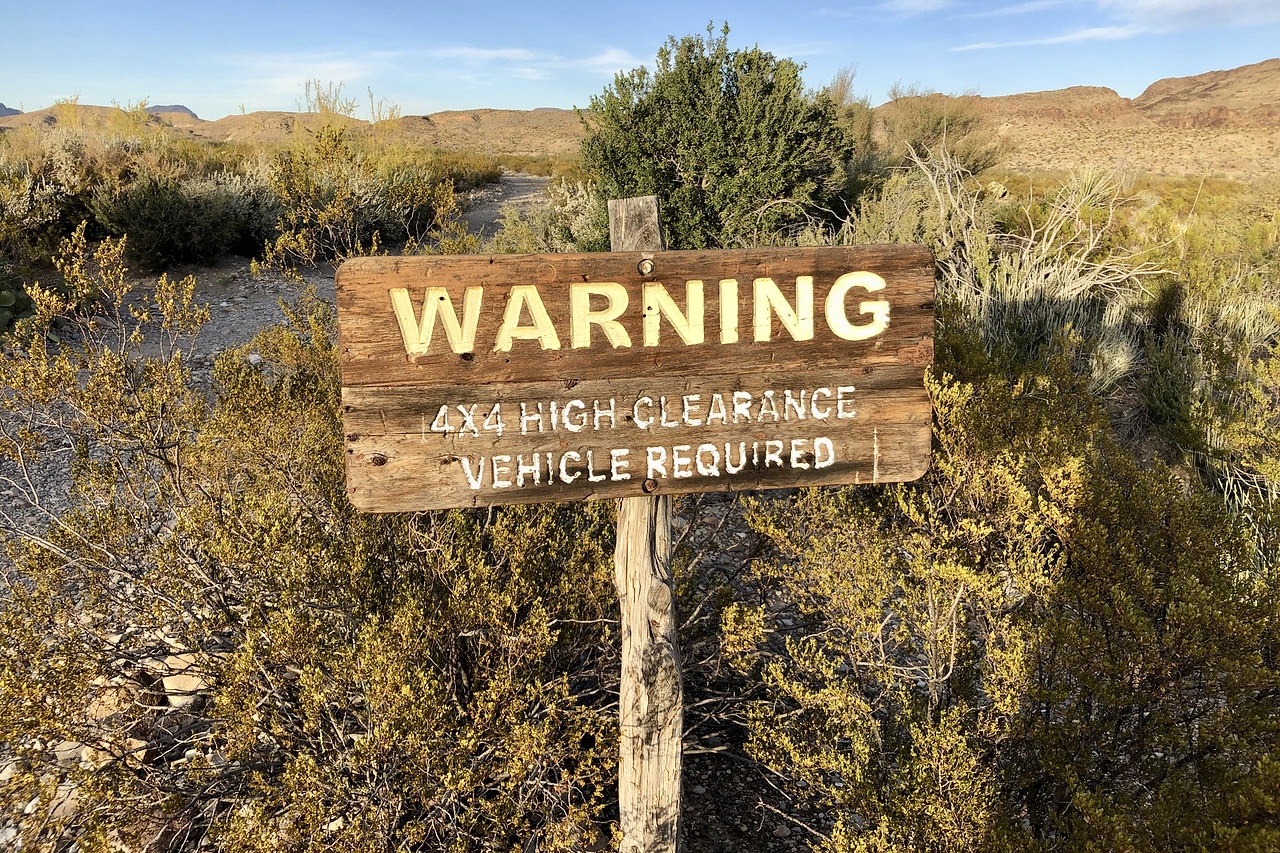 Our reward was a quiet spot in the desert with a stunning sunset to end the day to.

So at this point you might still be asking how bad could it be? Well, I can say that Black Gap Road is definitely not for the faint of heart as you will be pushing your truck and camper to the limits due to the vegetation at the beginning, the many off camber and rutted out areas, the large rocks, and of course the rock waterfall in the canyon. In retrospect, maybe we should have taken the long way around. I mean, how bad could it be?

About Jack Peeler 1 Article
Jack Peeler is a long time off-roader who has built several rock-crawlers and overlanding rigs. He has traveled and explored most of the states west of the Mississippi, including Alaska, Canada, Baja Mexico and Mexico. He currently calls Minden, Nevada home base when he’s not on an adventure.
Instagram

When it comes to extreme truck campers (XTC’s) and exploring off-road, few people know more than Jeffrey Reynolds. Known as Jefe 4×4 on the Internet forums, Jeff embarked on his first off-road adventure in 1965 [read more]