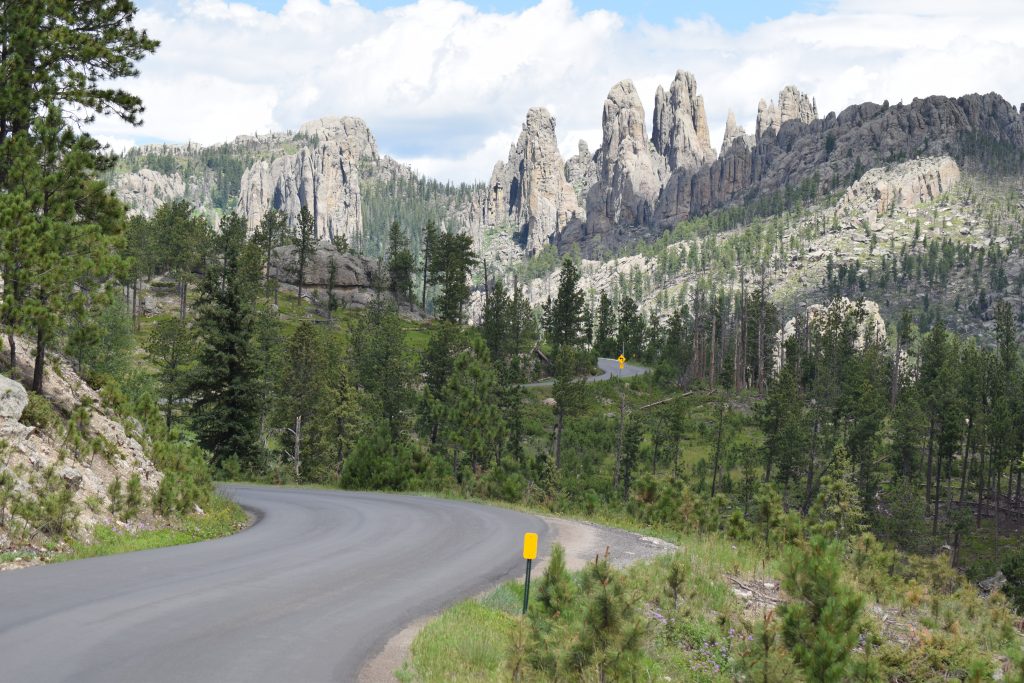 Have you ever been blown away by the natural beauty of a place that you totally underestimated beforehand? The Needles Highway (Route 87), located in the Black Hills of South Dakota, is one such place, at least it was for me. Prior to visiting there, I had seen photos of the hairpin turns, the narrow tunnels, and the needle-like rock formations, but the photos I saw didn’t do this scenic drive justice and still don’t. When I asked a park ranger, which is the best, most scenic drive in the state, without hesitation she answered the Needles Highway. In fact, she said that the drive is so beautiful that on a scale of 1 to 10, she would give it a 1,000. She was right. The drive is pretty spectacular. The winding road passes through and around a maze of granite towers, slender tunnels, and towering pines that’s quite unlike anything I’ve driven on. Yes, I know this magazine’s focus is on exploring off-road trails, but some drives shouldn’t be missed, even if they are paved. The scenery along this route is that good.

The Needles Highway is a part of the Peter Norbeck Scenic Byway, and is located within the borders of the Custer State Park, one of the largest state parks in the country. The byway is named after the creator, Peter Norbeck, a conservationist who also served as governor and state senator. Norbeck loved the Black Hills and wanted to construct a route that not only made the breathtaking scenery accessible to the public, but also complimented it. Norbeck mapped out the entire course on foot and by horseback, and after two years of construction on the highway, work was completed in 1922. The Needles Highway is an amazing feat of engineering. When Norbeck first proposed the project he was told by the engineering establishment that it was impossible to build and couldn’t be done. Norbeck, however, remained undeterred. When he asked his chief engineer, Scovell Johnson, if it would be possible to build the highway, Scovell replied, “If you can supply me with enough dynamite!” Norbeck did.

The highway’s three narrow tunnels, blasted through multiple layers of solid granite, are a highlight of the drive. Is it possible to take a small RV like a truck camper through them? Sure, if your camper isn’t too tall or too wide. You’ll need a low profile truck camper to make it through like a pop-up or a low profile hard-side like my 7-foot-wide Northstar Laredo. The narrowest tunnel is the so-called Needles Eye Tunnel at 8 feet, 4 inches wide. I removed my side jacks because they sit on 2 inch extensions, but in retrospect removing them wasn’t needed. I had plenty of room. My mirrors were fully extended at 8 feet, 2 inches and they never touched or scrapped against the sides of the tunnel. Height wise the shortest tunnel along the route is the Hood Tunnel at 11 feet 3 inches high. My camper sits at 9 feet, 8 inches high. Even with my 10-inch-high, low profile air conditioner, I still had several inches to spare. The best advice I can give you when you pass through each tunnel is to take it slow and make sure you’re centered. It’s also worth pointing out that unlike the nearby Iron Mountain Road tunnels, there are no bypasses for any of the tunnels found on the Needles Highway. The numbers on each Needles Highway tunnel is provided below:

Here are a few pointers for exploring the scenic 14-mile-long highway. The summer months are the busiest, with loads of tourists, so the best time to drive the route is during the spring and fall. Due to the narrowness of the road, passing opportunities are very limited, so the slowest car sets the pace. If you do explore the road during the summer, go early in the day or late to avoid the traffic. Give yourself at least two hours to tackle the drive. Even though the highway isn’t particularly long, the pace is fairly slow, plus you’ll want to stop often to take pictures. Vehicle traffic through the tunnels is one-way, which means there are often delays getting through if the traffic is heavy (things really slow down if you have to wait for a tour bus to pass).  The most scenic part of the drive is near the western end of the highway. If you need to shorten the trip, you can drive just the western end from Sylvan Lake to the Cathedral Spires pullout, then backtrack (this is what we did the second time we drove the highway). Take your time, stop often, and take in the views. You’ll also want to watch for wildlife. We had a herd of mountain goats pull out in front of us on one hairpin turn, which brought traffic to a standstill.

In order to explore the Needles Highway you need to first pay admission, or buy a park “license” as they call it. A seven day license will set you back $20, but the cost is well worth it. This license gives you free reign of the park which includes first class hiking trails, access to pristine lakes like Sylvan Lake and Bismarck Lake, and streams where you can fish. Admission to the park also provides access to the Wild Life Loop where you can gaze upon a herd of bison or buffalo. During our drive along the loop we saw not only buffalo, but also big horn sheep, wild burros, and prairie dogs. The buffalo, however, were the highlight of the drive. Several crossed the road in front of us which afforded us unequaled views and closeups of the magnificent creatures. It’s sad to think they were nearly hunted to extinction over 120 years ago, but it’s good to see that the buffalo is making a comeback in North America, of sorts. Most states and parks in the west, including Yellowstone National Park, have herds of buffalo that can be viewed and that are protected. Warning! Buffalo are not docile and can be quite aggressive. Never approach one in the wild. They’ve been known to charge tourists who tried to get too cozy with them.

As for the RV camping, there are plenty of places in the Black Hills where you can set up camp for the night. The nearby towns of Custer, Keystone, and Hill City all have RV parks that offer full hook-ups, but at around $50 a night, they’re pretty expensive. Numerous campgrounds, for around $25 a night, can also be found in Custer State Park, in Mount Rushmore Memorial Park, in Wind Cave National Park, and in the surrounding Black Hills National Forest. During our recent visit to the area we boondocked in the Black Hills National Forest between the town of Custer and Bismarck Lake. Dispersed camping opportunities are plentiful in the Black Hills National Forest. For those who are curious, the spot we found was on a short spur off of Forest Road 345. If you’re interested in dispersed camping and are unfamiliar with the Black Hills, I recommend stopping at the Ranger Office in Custer and getting copies of the latest maps that identify where you can camp. This is what we did and it worked well for us. Potable water can be obtained from the Custer town park and from the numerous campgrounds found throughout the area.

Whether you’re just passing through the Black Hills or are visiting as part of a long vacation, the Needles Highway is definitely worth the time and effort to explore and see. Indeed, the scenery along the route is world class and should be on everyone’s bucket list. Not only that, but of all the RV’s, the truck camper is perhaps the best RV for exploring it (van conversions excel on the highway as well). The compactness and maneuverability of the truck camper make it the perfect rig for exploring the twisting roads and narrow tunnels found along the route. I should mention that we had a few naysayers who said we couldn’t make it through the Needles Eye Tunnel with our rig. It was fun proving them wrong and showing them how well the truck camper does in such environments. How difficult is the Needles Highway for the truck camper? On a scale of 1 to 10, I’d have to give it a 2. The slender tunnels, narrow roads, and numerous blind turns require your complete and undivided attention, but its still very doable and fun.

About Mello Mike 621 Articles
Mello Mike is an Arizona native, author, and the founder of Truck Camper Adventure. He's been RV'ing since 2002, is a certified RVIA Level 1 RV Technician, and has restored several Airstream travel trailers. A communications expert, he retired from the U.S. Navy in 2004 as a CWO3 after 24 years, worked in project management, and now runs Truck Camper Adventure full-time. He also does some RV consulting, repairs, and inspections on the side. He currently rolls in a 2013 Ram 3500 with a 2021 Bundutec Roadrunner truck camper mounted on top.
Website Instagram YouTube

Truck Camper Adventure is proud to present another truck camper review written by a guest author. In this insightful and informative piece, Don Nelson provides us a Review of the Capri Cowboy truck camper, a [read more]