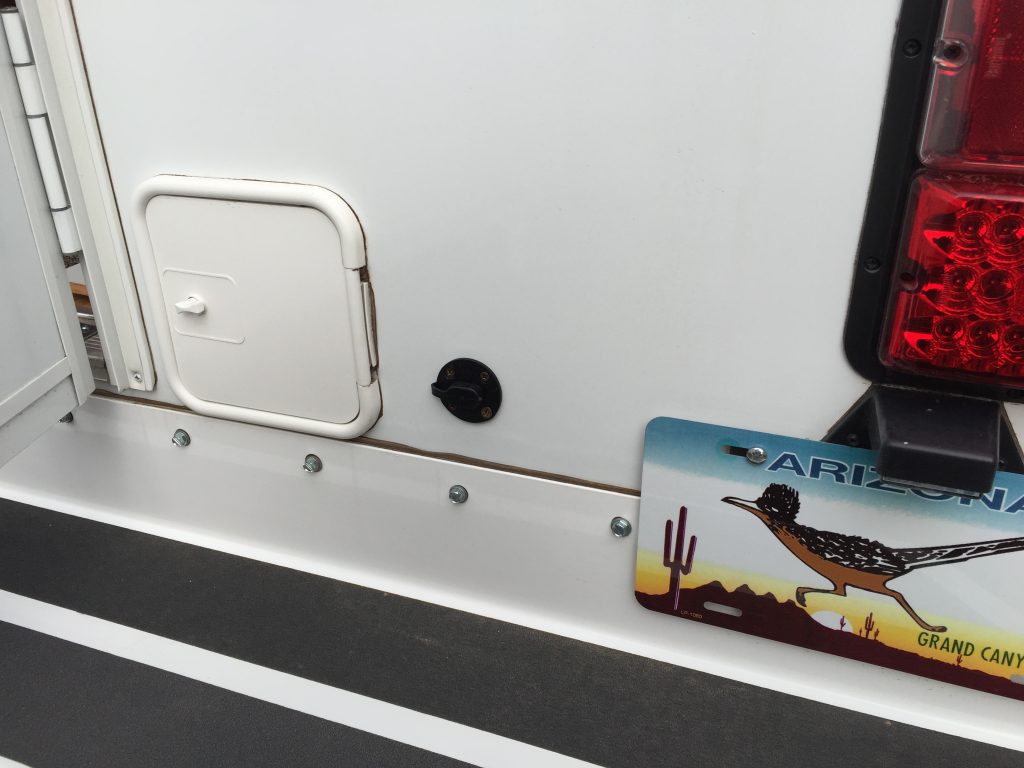 Interested in equipping your truck camper rig with a portable solar panel, but lack physical access to the batteries mounted inside your camper? Then you’ll want to take a look at this modification that provides this access via a 12 volt electrical charge port.

With the installation of a DC compressor refrigerator in my truck camper rig, I quickly discovered that my existing 240 watt roof-top solar power system was unable to keep my camper’s batteries charged during the winter when running the furnace was necessary. A larger solar power system was needed. Unfortunately, my rig lacked the roof space needed to add another 100 watt solar panel. Technically, I had the space, but mounting another panel on the roof would’ve left me with zero room to walk on the roof to perform topside maintenance. Because of this, I opted to get Zamp Solar’s 160 watt solar power suitcase to get the additional wattage I needed. This high-quality unit not only comes with two 80 watt, high-efficiency monocrystalline solar panels, but it also has its own 15 amp PWM charge controller and a padded carrying case.

While the lack of topside space played an important role in my final decision, what really solidified my choice were the benefits that a portable solar unit like Zamp Solar’s solar suitcase offered. Not only can a portable array be aimed directly at the sun, but it can also be tilted to optimize power output. This is especially useful during the winter months when the sun peaks at a lower point in the southern sky. A portable array can also be moved out of the shade to optimize output while your rig is left parked where it is.

With this important decision behind me, I had to devise a way to access my batteries electrically. Unlike most truck campers, which have the batteries mounted in an exterior compartment, the batteries in my Northstar Laredo are mounted inside the camper, underneath the dinette seat. I briefly considered installing a 12 volt charging station like the one offered by Palomino, but I wanted something smaller with just a simple socket or port to plug into, so I went with Zamp Solar’s 2-prong sidewall socket

Instead. This 12 volt socket is small, polarized, and comes with its own weatherproof cover. There are actually several RV companies that use this socket as OEM. In fact, my old Wolf Creek 850 truck camper used this socket as part of its rooftop “solar ready” option.

Deciding where to mount the sidewall socket proved easy. The batteries are located towards the back of the camper and a small void underneath the wet bath is conveniently located between the battery compartment and the rear wall of the camper. The length of this void is only 2 feet, a wiring distance that afforded practically zero line loss for 16/2 AWG wire. In the event of an upgrade at some point in the future, I decided to upgrade this wiring using 12/2 AWG wire instead. Plastic conduit was used to protect the wiring run from the new socket to the battery compartment.

Unfortunately, to install the socket I needed to drill a 3/4-inch hole in the back of the camper. I hated doing this, but it had to be done. In retrospect, drilling the hole wasn’t that bad and only took a few seconds to accomplish. I just had to make sure that I didn’t damage any of the PEX plumbing near the hole. For waterproofing the socket, a large piece of Butyl tape was used. Black wood screws were used to mount the socket. Since the 12/2 AWG wire that came with the socket is only 12 inches long, I had to solder an additional 2 feet of wire to reach the batteries. Shrink tubing was used to insulate the soldered connections.

As you can see from the photos, the new socket is in an inconspicuous location and looks great. It allows me to plug and unplug my solar suitcase into my batteries quickly and easily. It also provides me a way to connect my Windwalker 250 wind turbine to my batteries as well (though not at the same time as my portable solar suitcase). Even though I would consider this modification fairly easy, on a scale of 1 to 10 with 10 being the hardest, I’d have to give this project a difficulty rating of 2 because of the drilling that’s involved.