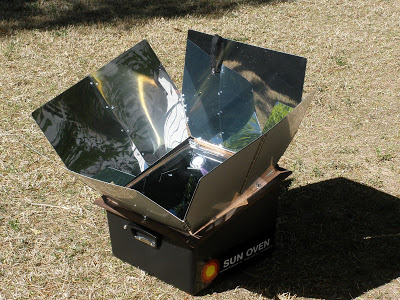 Whether you’re a rabid camping enthusiast or avid prepper, the solar oven is a great, low-cost addition for meal preparation and water sanitation. The appliance is lightweight, compact, can be safely used year round–including in winter–and requires no fossil fuel to operate. All you need to do is aim the oven at the sun for it to cook! If you’re already sold on the benefits of solar power, then you’ll absolutely love what the solar oven has to offer.

As mentioned, the great thing about the solar oven, is that it requires no fuel to operate. For preppers, this is a huge consideration. While storing and rotating food and water are relatively easy, the same can’t be said for cooking fuel, like propane and fire wood. In the event of a disaster, fuel supplies will dry up within hours, so what you have on-hand is all that you will have for who knows how long. That’s what makes using solar so great. Except on overcast days, there will always be a plentiful amount of sun for you to cook with.

The solar oven we purchased was made by Sun Oven International, based out of Elburn, Illinois. The oven is well constructed and made entirely in the USA. The outer shell is made of rugged ABS plastic with the inner shell constructed of anodized aluminum. The reflectors, which can fold flat when not in use, are also made of anodized aluminum. The great thing about anodized aluminum is that it will never oxidize, rust or corrode. The glass door, which encloses the aluminum cooking chamber, is made of clear, tempered glass. Between the inner and outer shell is a thick layer of food grade fiberglass insulation to retain the heat. Our oven comes with an optional thermometer. The dimensions of the oven are 19 x 19 inches, with an average depth of 11 inches. It weighs only 21 pounds and comes with a small handle that allows you to carry the oven like a small suitcase. As part of a group buy purchase, we spent about $180 for the oven.

Capable of reaching temperatures up to 400 degrees, the temperature of the oven is controlled solely by how often the oven is aimed or refocused toward the sun. For techies, aiming a solar oven is very similar to how you would aim a satellite dish, except, of course, you’ll be aiming at a moving sun rather than a stationary satellite. The Sun Oven’s elevation is controlled by using the built-in leveling leg which extends out the bottom and locks into place using pre-measured holes. The built-in “levelator” inside the Sun Oven keeps food level no matter how high the rear of the unit is elevated, a very nice feature. Like a crock-pot, the solar oven can be used for slow cooking stews, roasts, or chili. For instance, you can place your food in the oven in the morning, point the oven toward the south, then return six hours later to a tasty meal for dinner. Or if you prefer quicker cooking times, you can refocus the oven to follow the sun every 25 to 30 minutes.

Aside from the fact it doesn’t require fuel to operate, what I really like about the solar oven is that it’s versatile. Even though it’s called an oven, it can be used for baking, boiling, or steaming. Any food that you would normally cook on a stove top or in an oven can be cooked in a solar oven. Since there is no movement of air inside the cooking chamber, stirring isn’t necessary nor will your food ever burn. In addition to cooking, the solar oven can be used to boil or pasteurize water; dehydrate fruits, vegetables, and meats; dry firewood; and decrystallize honey or jams. I’m told that solar ovens even make an outstanding sun tea.

According to the makers of our Sun Oven, special cooking pots aren’t required, but they do recommend that you use dark-colored, thin-walled pots with lids. The reason is because dark pots absorb the light and heat from the sun better than shiny ones. Glass casserole dishes also work well in a solar oven. With the exception of baked goods, like bread, everything in a solar oven should be cooked in a pot or dish with a lid as the lid keeps the steam locked inside. Failure to use a lid when cooking will result in the glass door top fogging up which will reduce the cooking temperature. Dark tins and cookie sheets are also recommended for cooking baked goods.

Based upon enthusiastic recommendations from family and friends, we bought this solar oven as part of our emergency preparedness plan. While the solar oven excels in this role, it can also be used in other more routine ways such as in camping where electricity isn’t available and in daily meal preparations at home. If you’re looking for an great alternative for cooking food that doesn’t require fuel, is good for the environment, doesn’t heat up your home or RV, and that doesn’t require close attention while cooking, then the solar oven is for you.

Adventure Manufacturing, Scout Campers launched the second model of its fleet recently—the Yoho 6.0—designed specifically for the growing mid-size truck segment. According to the press release, the Scout Yoho is like a backpack for a [read more]