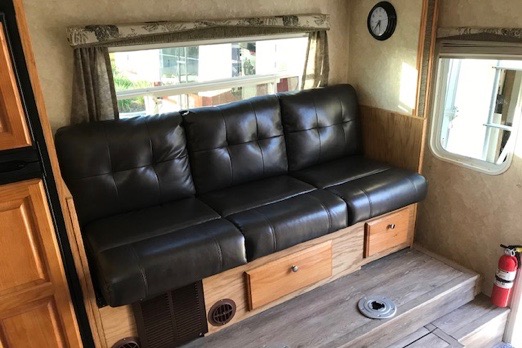 One of the biggest complaints with today’s truck camper is with the lack of comfortable seating. Sure, the typical dinette found in most campers is functional for meals and games, but is hardly the kind of place where you’d want to lounge around and watch TV. A recliner or sofa would solve the problem, of course, but most campers lack the space for one, unless you own a double or triple slide-out model like the Host Mammoth or Lance 1172. One solution is to replace the dinette with a jack-knife sofa. Doug Sloan shows us how.

My wife and I have traveled twice to Alaska in our fifth wheel and in anticipation of our third trip June 1, 2019, we decided to purchase a used Truck Camper. Last August we purchased a 2006 Arctic Fox 811 with the short bed option. The camper we purchased would have been rated as a 9 out 10 and we felt it fit all of our needs. After several weeks of making several small modifications we left for our first trip along the Blue Ridge Parkway. During our trip we realized that evening sitting could be modified to better fit our needs, so we decided to change the dinette sitting area. We tossed around several ideas and decided on a sofa/bed as being our best option if we could find one or make a sofa to fit the width of our booth which is 72.25 inches.

The dinette booth had two major obstacles to overcome; first the furnace and the 40 inches of floor depth on the slide out. We also had to find a way to sit four people at the table since we travel with friends who have their own RV and we alternate nights of making dinner. We searched the internet and came across a RV Jack Knife sofa which is 68 inches wide and the back of the seat is 24 inches high. The back cushion would only cover a couple of inches of the dinette window. The sofa is 28 inches deep and must be a couple of inches from the wall to operate as a bed which only leaves 10 inches of floor space in front of the sofa. The question for us was how could a chair or stool be placed at both ends of the table so four people could be seated at the table? The problem of the furnace was easy enough, since the sofa is recommended to be mounted at least 12 inches above the floor and we would mount the sofa 13 inches off the floor. The sofa would then clear the furnace by a couple of inches. So we drew up a sketch and ordered the sofa.

The modification began with the removal of the table, cushions, and the drawer. The screws holding the dinette were then removed and believe me there where many of them. The corners of the dinette framing had several hidden screws that were hard to locate since they were driven deep into the framing. The backs of the seats were difficult to remove because some of the screws must have been screwed in before the refrigerator was installed. I elected to cut out a 4×4-inch piece of the back of the dinette bench rather than disconnect the wires leading to the back of the refrigerator. After the dinette benches were removed, the only thing left in the slide out was the furnace. One other problem to be addressed was the access floor panel to the shear pins of the slide which would be right in front of the sofa.

To install the sofa we decided to install a 3/4-inch piece of Oak plywood against the walls with a 1/4-inch edging. The new wood was stained with Golden Oak stain, which is almost a perfect match to our cabinets. We then cut and built the sofa support and attached it to the new wall side panels. The top of the support was made wide enough so the sofa could slide for its conversion to a bed. The sofa was placed on the supports and angle aluminum was used to hold it down but would allow the sofa to slide away from the wall. A strap was attached to the back of the sofa from the outside storage compartment to keep the sofa from moving too far from the wall.

We elected to use Oak plywood as a front foot board instead of the panel that came with the sofa. The front panel houses the two heat ducts, the heat vent return (which also serves a service panel to furnace), a drawer, drop down access door, and the electric outlets. This same panel was cut to the right height to allow the sofa to operate as a bed. The panel was also attached so it can be removed if the furnace ever had to be replaced. A cut out over the access floor panel was made so the panel can be removed.  This notch is 3/4-inch high and the full width of the panel which is also used to hold removable floor boards for foldable stools. The notch is copied on the other side of the front panel under the heat return vent.

The sofa was then slid in place after the various attachments were installed. The center drawer was installed after the table leg mounts were screwed in and the table was made. The drawer opens between the table legs.

The table is actually two tables connected together with a window sash lock. The table is on drawer slides to make it easier to get seated and to align the table to stools when four people are at the table. We made a locking device from a sliding glass door lock to keep the table from sliding when seated. Also two 20×25-inch tables are easier to store then one large table.

Two removable 3/4-inch plywood boards can be put down on the floor and slid into the notches so the foldable stools can be safely used. We also made a storage area under the sofa and above the drawer for the folding stools. The two floor boards were made different sizes to see which size is best and final floor boards will be made and stained to match the flooring. The floor boards will be stored under the bedroom mattress.

This was a fun project which took a considerable amount of time because of all of the design development. Relaxing time after a day of sightseeing will now be more comfortable. Part of this modification included moving a small 19-inch TV from the bedroom area to directly in front of the sofa by using a TV mount with two wall brackets.