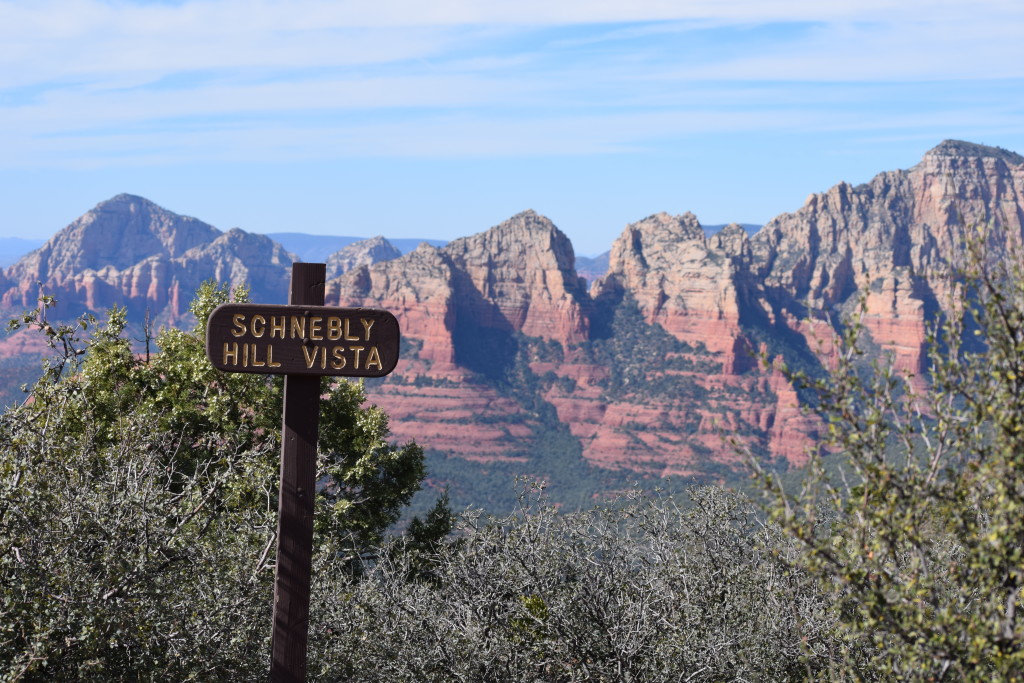 Along with the Grand Canyon, Sedona is one of Arizona’s most popular tourist attractions. The reason lies with Sedona’s towering buttes, canyons, and spires. Simply put, there are few places in the American west more beautiful than the red rocks of Sedona. Indeed, Sedona is consistently ranked as one the most beautiful places in America by TV shows, newspapers, and magazines. Another reason for Sedona’s popularity lies in the fact that the town is surrounded by 1.8 million acres of protected national forest. This forest provides Sedona’s four million visitors a year with instant access to recreational activities, including hiking, biking, camping, and four-wheeling. The latter is an especially popular activity in Sedona with numerous internationally renowned Jeep roads. One of the most popular of these roads–and one of the best drives in all of Arizona–is the 13-mile-long Schnebly Hill 4×4 Road (FR153).

The history of Schnebly Hill Road is pretty interesting. The scenic route began life as a cattle trail blazed by pioneer Jim Mund in the late 1800s. Joy Loy set out in 1896 to improve the trail and by 1901 had scratched out a rough and winding passage called the “Verde Cut-Off Road.” Still, improvements to the road were badly needed, and in 1902 the Coconino County Board of Supervisors awarded a $600 contract to Civil War veteran J.J. Thompson to perform the work. With picks and shovels, Thompson’s men labored hard until work on the road was completed six months later. What did building this road really accomplish for the residents of Sedona? It reduced the length of the one-way trip to nearby Flagstaff from four days to two. Evidence that wagons used this road extensively over the years can still be seen in places today through deep and narrow ruts in the bedrock surface. Today, Schnebly Hill Road terminates with Interstate-17.

Warning! The first 3/4-mile of Schnebly Hill Road from the roundabout is paved, but soon thereafter the pavement ends and the road becomes rough, and in some places, very rough. When locals say that only a high-clearance 4×4 vehicle should attempt this drive, they mean it. In many places the rough and rocky surface is pock-marked and badly rutted, requiring the need for a spotter to navigate without bottoming out or scraping a differential. That isn’t to say that they’re aren’t some smooth and sandy stretches along the scenic route, there are, but they’re few and far between. Fortunately, Schnebly Hill Road is very wide, which is a good thing, as it gives you room to maneuver around and over ruts and obstacles–straddling over these ruts and obstacles is often a good tactic. It’s slow going traveling on Schnebly Hill Road, but if you’re willing to do it, you’ll be rewarded with views of the town and the surrounding peaks and buttes that will simply take your breath away. The best advice I can give you is to air down your tires to 40 PSI, take it slow, and stop often to take in the views and snap some photographs. 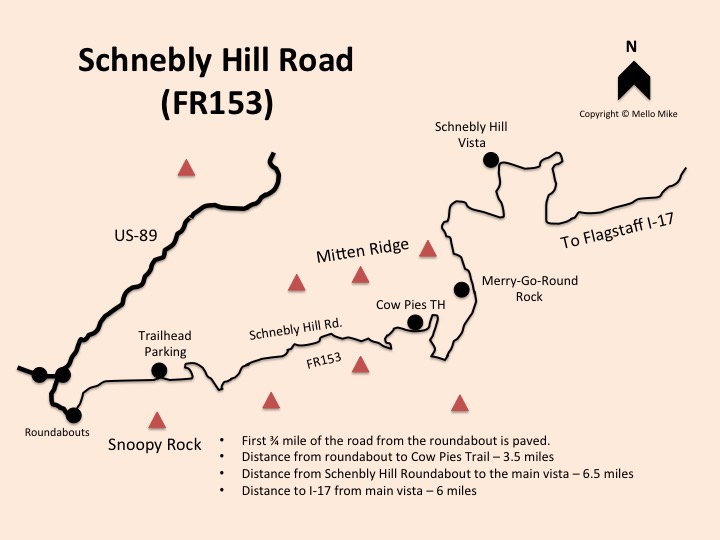 The most popular direction to tackle this drive is going east from Sedona. This is the direction that most tourists and Jeep tours take, but both times we drove the road we took it from the Interstate going west. I actually prefer this direction because amazing views are constantly before you as you wind your way down from the top. If you’re planning on driving this road, it’s a good idea to boondock overnight before you reach the Schnebly Hill Vista. There are three or four prime spots that have been designated for camping before the vista (camping isn’t allowed past this point). The elevation of these camping spots is about 6,100 feet which makes for a pretty cool retreat during the summer months. The only negative is the amount of Jeep traffic that can be heavy at times, though this tapers off before dusk. There are no camping services at these locations, not even a pit toilet, so pack-it-in and pack-it-out applies.

From Sedona the road climbs 1,800 feet to the top of Munds Mountain. There are several pull-offs along the way where you can stop, stretch your legs, and take in the views. The grand finale of the entire drive is to the so-called Schnebly Hill Vista at the top. From here, at an elevation of 6,000 feet, you can savor the expansive views of the valley and the surrounding peaks. The best time of year to enjoy the views from the main vista is between April and November. Note, during the winter months road closures from the so-called Merry-Go-Round to the vista are common, especially after winter storms and snow. Because of this it would be a good idea to call the Red Rock Ranger District ahead of time at 928-203-2900 to ensure that the entire road is open.

If you’re planning a trip to Sedona or northern Arizona and you’ve got a hunger for a heavy dose of red rock, then Sedona’s Schnebly Hill Road is made to order. Yes, the road is very rough at times, but it isn’t daunting to the point that you should avoid driving it. The road is fairly level with a slight slope and for the most part the road is wide enough for three and sometimes four vehicles. Just make sure you air down your tires before tackling it. How difficult is Schnebly Hill Road? On a scale of 1 to 10, with 10 being the hardest, I’d give Schnebly Hill Road a difficulty rating of 6 for truck campers and a 3 for Jeeps. Some guidebooks have rated the road as “easy,” but this is for Jeeps. It’s certainly wide enough to warrant such a rating, but the very rough condition of the road knocks the rating down considerably, especially for truck campers.

A few weeks ago we explored the 14-mile-long White Canyon Trail in the White Canyon Wilderness near Superior, AZ. The scenery along this 4×4 trail is pretty spectacular. In fact it was so stunning I [read more]

Kanab, Utah is one of my favorite towns in the American Southwest. Located just a few miles north of the Arizona state line, the population numbers only 4,000, which gives Kanab a small-town, “Mayberry RFD,” [read more]