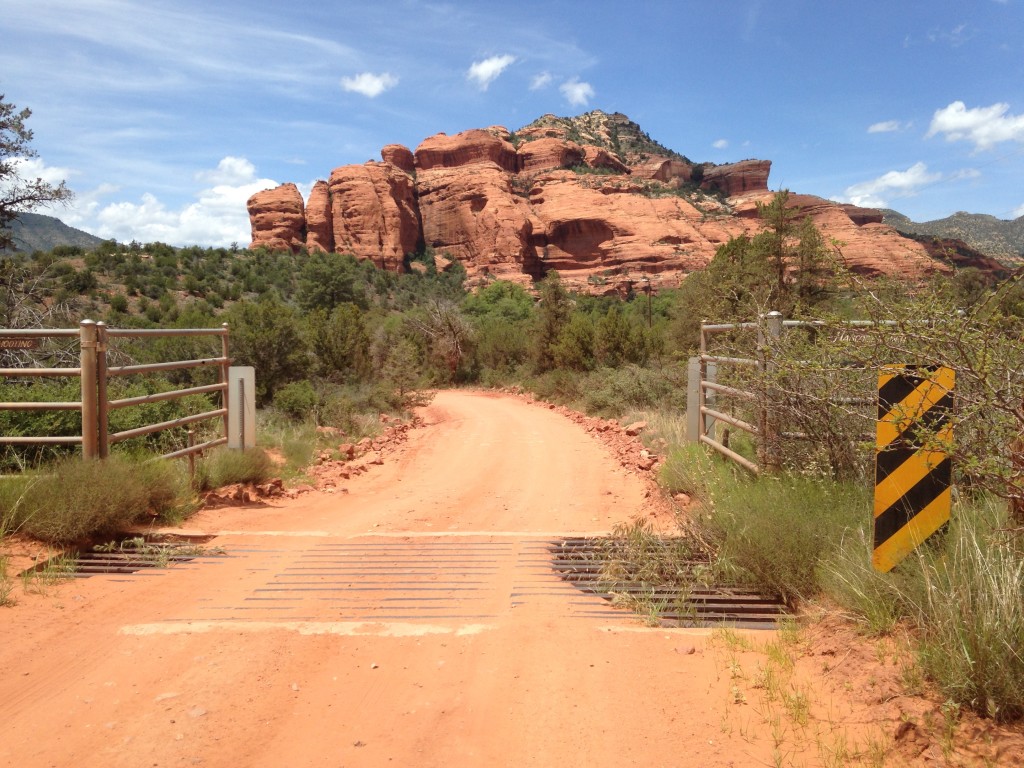 “God created the Grand Canyon but He lives in Sedona,” the old saying goes. If you’ve ever been to Sedona, Arizona you know why. Sedona’s vivid red buttes, picturesque canyons, and mysterious vortexes are famous the world over, drawing four million visitors annually. One thing that makes Sedona so special is that it’s surrounded by 1.8 million acres of national forest public land. This means that visitors have access to numerous trails and forest roads where you can get up-close and personal with the colorful pinnacles, mesas, and buttes. Another thing that draws so many visitors to the area is that it’s home to several Indian ruins. One of Sedona’s best and most scenic drives, that happens to also lead to some of these ruins, has to be Loy Butte Road (FR-525). This route also forms the eastern half of the famous Outlaw 4×4 Jeep Trail.

Located in the Coconino National Forest, Loy Butte Road is approximately 11 miles long and completely unpaved. The average speed is about 25 miles per hour and runs generally north-south. The road can get pretty rough in places, especially during the latter part of the drive, but it’s nothing like Schnebly Hill Road or Forest Road 152 further east. Loy Butte Road can be navigated by SUVs and small, two-axle RV’s like truck campers when dry, but it’s not regularly maintained by the County, so you’ll probably encounter some deep ruts and some washboarding along the way. Since the route passes through several washes, I would avoid driving on it when wet unless you have a four-wheel drive vehicle. Still, on a scale of one to 10, with 10 being the most difficult, I’d give Loy Butte Road a difficulty rating of one for small RV’s.

If you’re looking for a quiet, idyllic, isolated drive far from civilization then this drive isn’t for you. This is Sedona, after all, where tourists are as plentiful as the rays of sunshine. During daylight hours you’ll encounter other vehicles on the road, especially the ubiquitous pink Jeep or two or three hauling tourists to the archaeological sites. Their presence on the road and at the archaeological sites isn’t disrupting, but it is something to be aware of, so some caution is required before stopping on or along the road to take pictures.

Loy Butte Road is easy to find. Take Highway 89A west out of Sedona and continue past the last traffic light for five miles. Just past mile marker 365, turn right (north) on Forest Road 525. Note that some maps, like the one I included in this article below, call this road Red Canyon Road. Don’t let this confuse you. Loy Butte Road, Red Canyon Road, and Forest Road 525 are all the same road.

With two excellent archaeological sites–the Honanki and Palatki ruins–this drive gives you the opportunity to channel your inner Indiana Jones. Built by the Sinagua Indians, ancestors to the Hopi, they were the largest cliff dwellings of the Red Rock country between AD 1150 – 1350. The Sinagua lived here preparing meals, raising their families, and making tools from stone, leather, and wood. Famed archaeologist Dr. Jesse Fewkes, gave the two sites the Hopi names of Honanki (Badger House) and Palatki (Red House) in the early 1900s, though the Hopi, apparently, had no specific names for either of these sites. When visiting, I recommend about one to two hours at each site in order to take everything in. We especially enjoyed looking at the numerous pictographs and petroglyphs at the Honanki ruins.

Note that a Red Rock Pass (or an America the Beautiful Interagency Pass, Golden Age or Golden Access) is required if you leave your vehicle on National Forest land around Sedona and Oak Creek Canyon. On this route, the fee applies to the aforementioned Honanki and Palatki ruins only. The pass must be displayed in the windshield of your vehicle at all times. Vehicles parked in these areas that do not display a valid pass in the windshield can receive a ticket. A pass is not required for quick stops to take a photograph or to enjoy a scenic vista (15 minutes or less).

If you’re looking for a scenic place where you can boondock for the night after taking in the sights, then you’re on the right road. The Coconino National Forest allows dispersed camping but only in places located outside the green outline on the map above. For those on Loy Butte Road, this means you can boondock on both sides of the road for the first 6 miles up to Boynton Pass Road. After Boynton Pass Road, boondocking is allowed on the west side of Loy Butte Road only. You’ll see signs indicating where you can’t camp and only previously established “campsites” can be used in those areas where it’s permitted. These sites are completely undeveloped, of course, and no services are provided. If you need to dump after camping there are a few RV parks and state parks in Sedona and in nearby Cottonwood that provide this service.

Our Visit and Drive

We visited Sedona in mid-May and did all of our traveling and boondocking in our truck camper. Because of the crowds, getting around Sedona and finding good parking can be difficult for a large RV like a motorhome or fifth wheel, but we found navigating and parking in town quite easy in our nimble, little truck camper. We explored Loy Butte Road and the ruins at the end of our five day visit to Sedona and wish we spent more time there. The area is quieter and less hectic than in town and makes for a much more enjoyable experience. The temperatures in mid-May were a bit on the warm side, with highs in the upper 80s, but the evenings were cool and pleasant with lows in the lower 60s–perfect sleeping weather.

Driving the Loy Butte Road was great. The views as you travel north are stunning. For the most part, the surface of the road is smooth and graveled with the color of the road alternating between gray and red. Because of the elevation along this route–about 4,700 feet–you won’t see any towering Ponderosas, but you will see thick forests of Pinyon pines, especially along the buttes and mesas on the east side of the road. Like I said earlier, the ruins are the highlight of the drive. The Palatki ruins can only be seen by signing up for one of the many free tours that are given during the day. The tour guides are volunteers, but are pretty knowledgeable. We didn’t have time to take this tour, but we have it on our bucket list next time we’re in Sedona.

We spent a good two hours touring the Honanki ruins. A short hike is required to get to the ruins from the parking lot, but it’s shaded by trees and is less than a half-mile long. Unlike the Palatki site, which is staffed by Forest Service volunteers, there are no volunteers providing tours at the Honanki site. You’ll only find Pink Jeep tour guides here who are hired. When were there, we were fortunate to listen-in on an existing tour and were able to overhear quite a bit. The ruins, as they exist, are about 700 years old. The site consists of two pueblos, suggesting that two separate families or kin groups lived there. The site appears to have been occupied not only by the Sinagua, but also by the Yavapai, and Apache. It was pretty neat to see evidence of the former occupants: a 700-year-old finger imprint that was left in an old mortar joint and a flat boulder that was used to grind corn and beans.

The highlight of our time at the Honanki heritage site was gazing upon the site’s numerous pictographs and petroglyphs. It was interesting to learn the differences between pictographs and petroglyphs. Pictographs are actually symbols and writings painted on the rock while petroglyphs are pecked or inscribed with a tool. Archaeologists have determined that some of the images are much older than the cliff dweller site and were created by several cultures over thousands of years, including the Paleolithic, Archaic, Sinagua, Yavapai, Apache, Navajo, and Hopi. The images found on the rock include humans, hands, deer, lizards, birds, and coyotes. The circular shield-like pictograph above the eastern pueblo has been interpreted by some archaeologists as being a kin or clan symbol.

After exploring the Honanki ruins, we climbed back into our rig and headed south to look for a good boondocking spot. According to our reconnaissance efforts, aided by images from Google Earth, the best spots are located south of Boynton Pass Road on the east side of Loy Butte Road. Forest Road 9513 is lined with several good locations with excellent views of the Sedona Red Rocks to the east. We found this area and the others too crowded by other RVs, so we decided to isolate ourselves a bit and looked for a good spot along Forest Road 761. A short time later we found a nice location across the road from a small airstrip used to fly radio controlled airplanes.

While we were boondocked, we were pleasantly surprised to find that we had pretty good 4G reception with AT&T. We also found that the views of the stars at night around Sedona are pretty impressive, and if you’re lucky, you might even see a hot air balloon or two in the morning flying overhead. Unfortunately, goatheads, a particularly nasty thorn found in Arizona, are abundant in this area, so make sure your shoes are free of them before stepping foot in your camper. Otherwise, you may “find” a nasty surprise in the middle of the night.

The scenery and attractions along Loy Butte Road and the Outlaw Trail are a feast for the eyes and is one of Sedona’s lesser known drives. It’s not as popular or as well known as the climb up Schnebly Hill Road or the drive around Red Rock Loop near Oak Creek, but it’s also less crowded and easier to navigate. And if you’re into exploring old ruins and gazing upon ancient petroglyphs it’s an added bonus. So if you’re looking to get away from the vast throngs of tourists and are interested in seeing a part of Sedona that is often overlooked, you should strongly consider exploring this route. You won’t regret it. How difficult is the trail? On a scale of 1 to 10, with 10 being the highest, I’d give this part of the Outlaw Trail a difficulty rating of 1. As long as the rains stay away, it’s that easy.

My, how time flies. It’s already mid-January and the 2023 Truck Camper Adventure Quartzsite Rally is less than a month away. At present, we have nearly 800 people and 410 truck campers enrolled in the [read more]