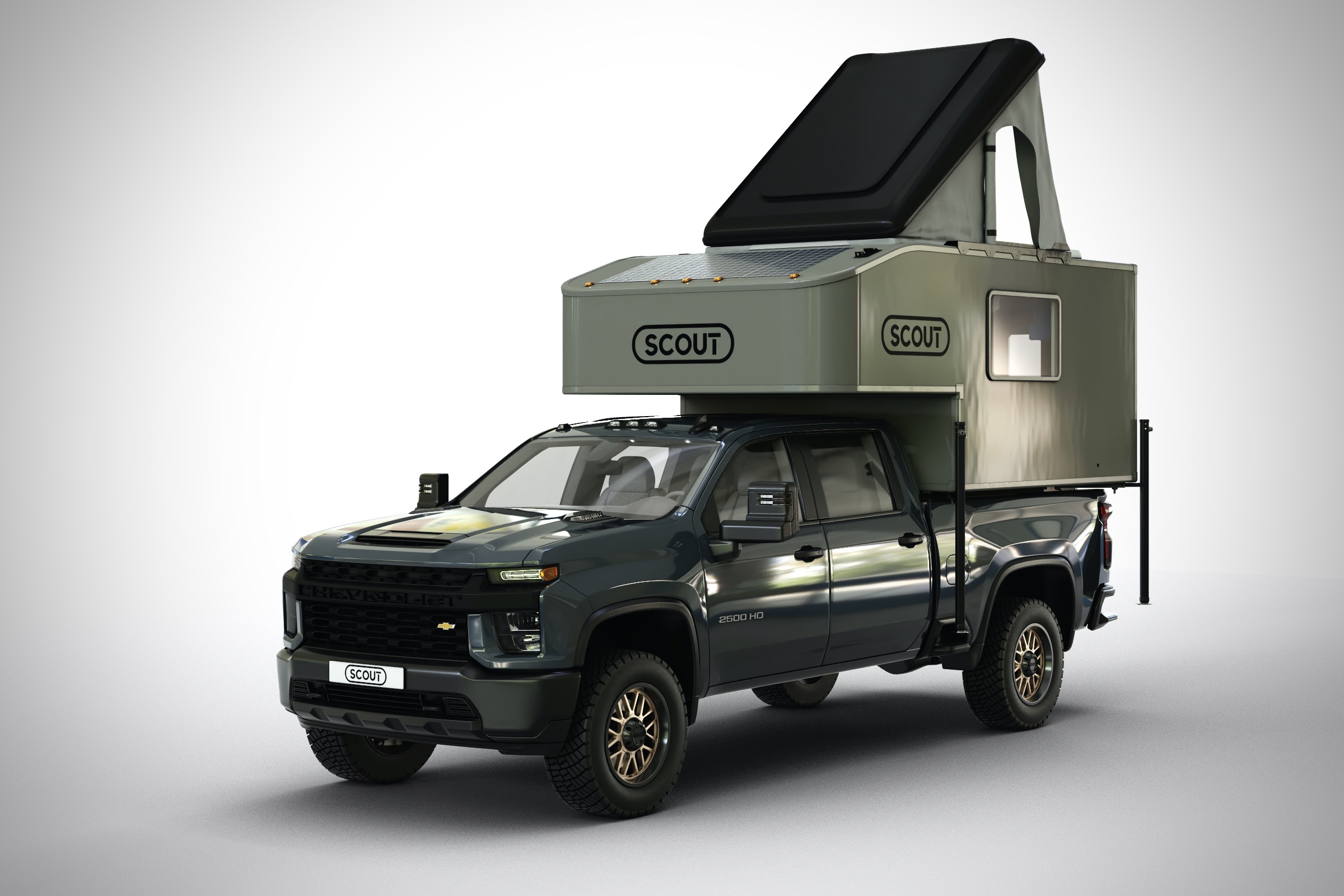 Yakima, Washington-based Scout Campers, maker of lightweight, off-grid truck campers, launched its third and final model this week called the Kenai. Designed for today’s full-size, short-bed and long-bed trucks, the Kenai remains true to the Scout’s values of being minimalistic and lightweight, yet is capable enough for those who want to travel far off the beaten path.

On the outside, the Kenai looks like the Olympic and Yoho, Scout’s earlier models, yet the Kenai is significantly different where it really matters—inside. These differences include a designated bathroom, a mud room, a queen-size bed, more customization options, and extended storage options for long distance travel. In spite of these additions, the dry weight of the Kenai is still only 1,370 pounds yet can sleep up to six persons comfortably.

In what will surely be a big hit, the Kenai’s mud room and shower enclosure contains a built-in stainless-steel drain pan and curtain enclosure located at the entrance of the camper. The versatile space serves as a protective area to either shower or rinse off muddy shoes, gear and clothing, and drains directly outside the camper. The shower comes standard with a 360-degree shower curtain that attaches to a track on the ceiling and connects to the stainless-steel drain pan to keep the water contained.

Another notable feature that will keep users and their families clean is the RinseKit portable shower option. This pressurized, heated shower can be used inside or out and was designed to be stored in the upper shelf in the bathroom. 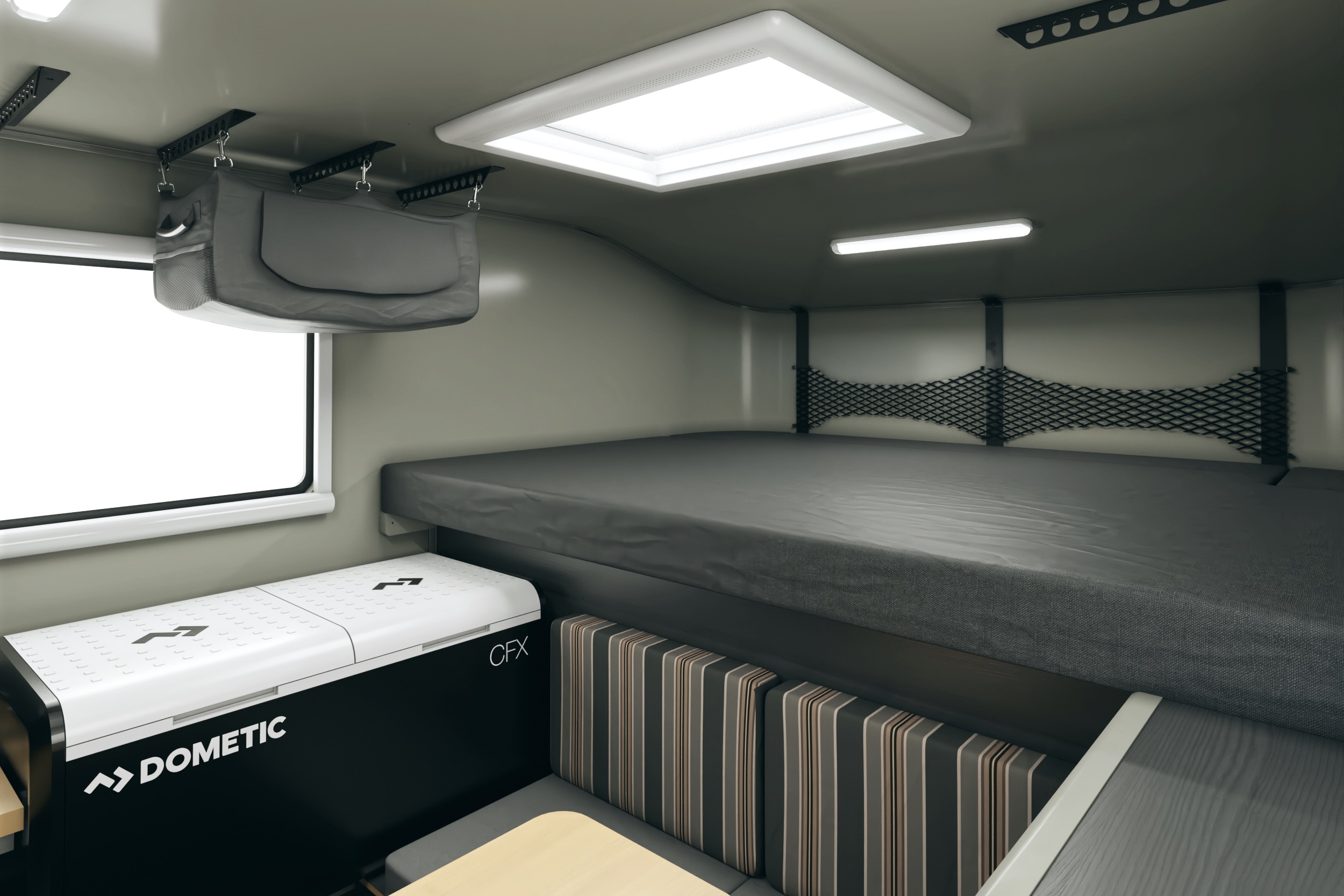 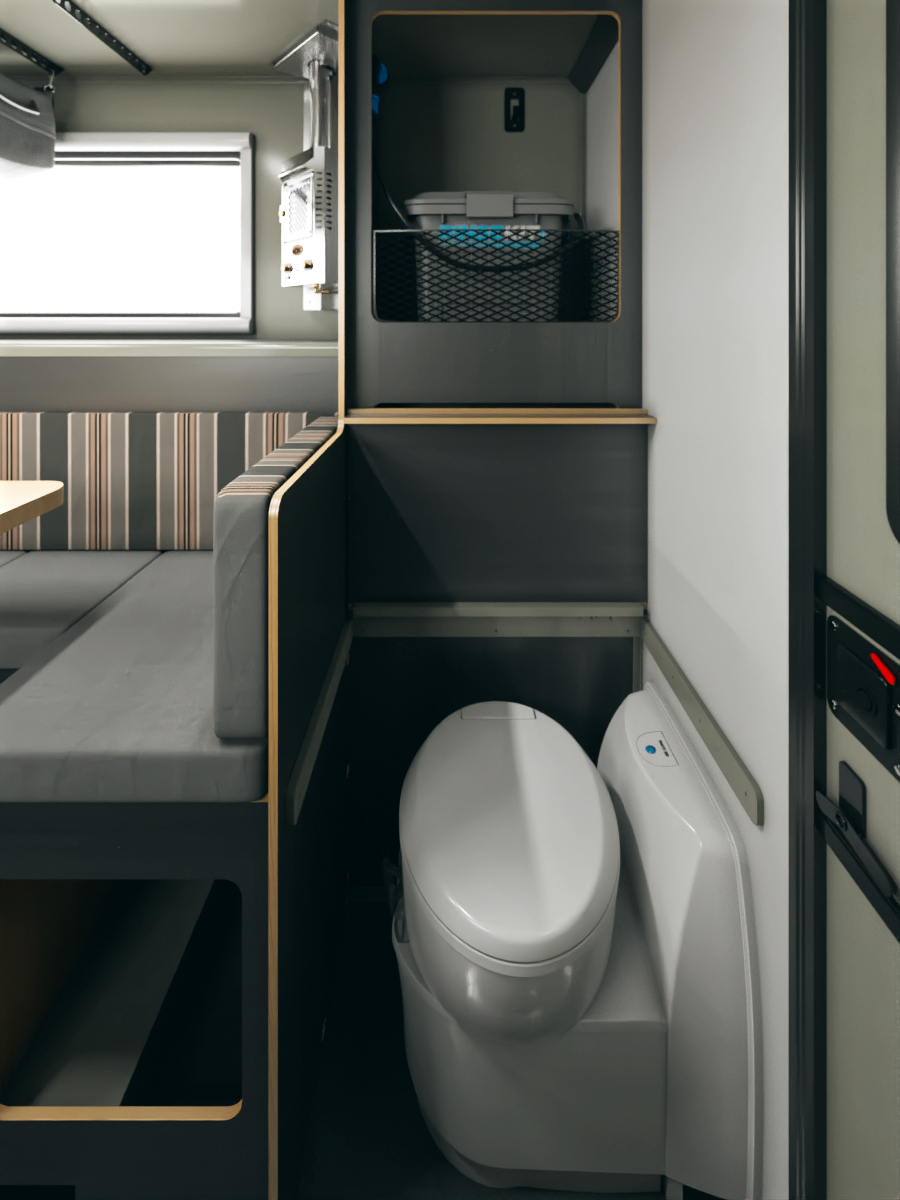 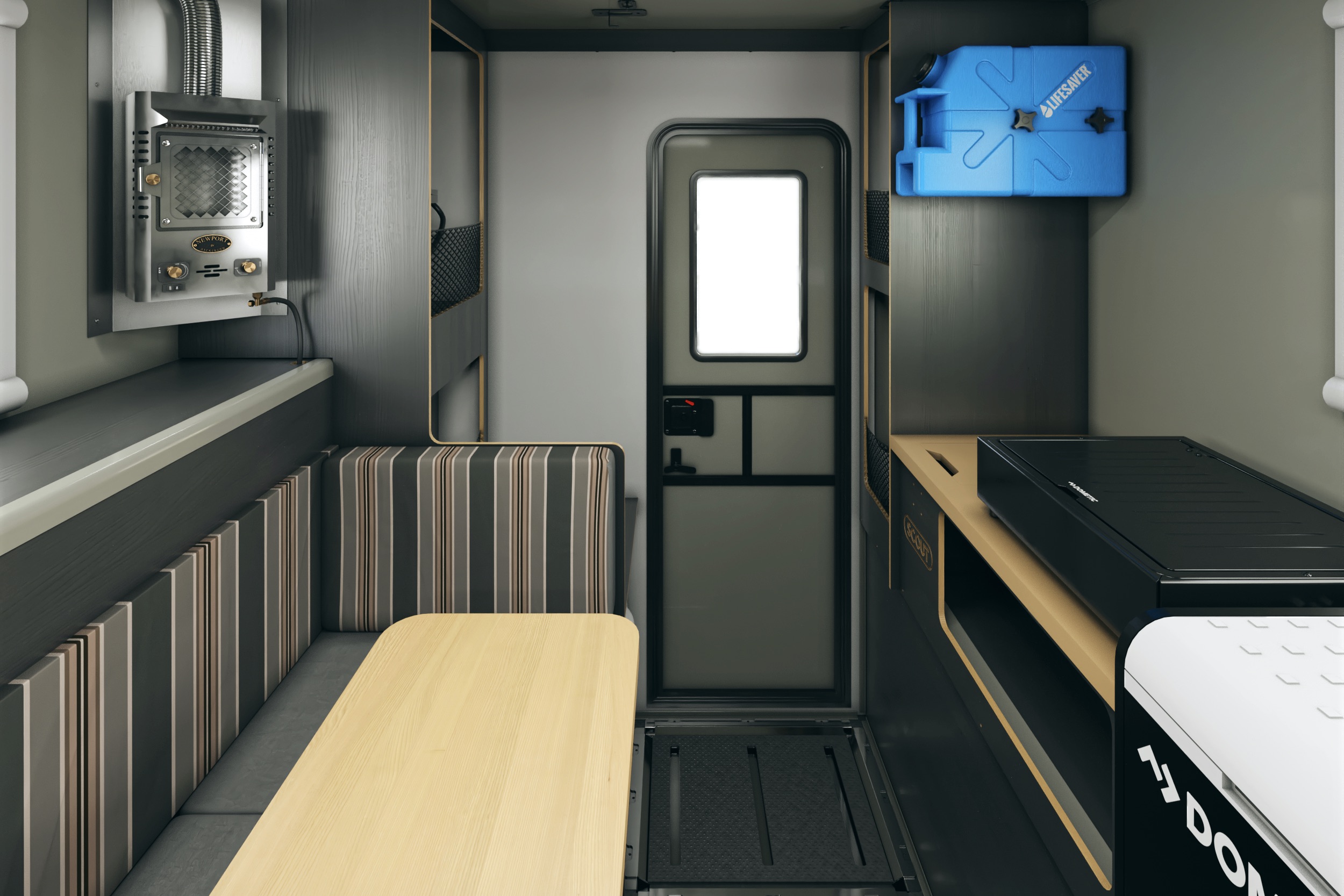 The option for an integrated Thetford Cassette Toilet is another unique feature for the Kenai model and one that Truck Camper Adventure is glad to see. The cassette toilet offers numerous benefits over the traditional toilet, including more freedom on where you can dump. Rather than limiting you to just RV dump stations, which are sometimes difficult to find, the 4.75-gallon cassette can be dumped at a campground pit toilet, city park, or interstate rest area bathroom. The cassette toilet used in the Kenai is designed to maximize space as it pivots out for use and then locks back into a stowed position. Buyers still have the option for installing a standard Dometic Portable 2.6 gal toilet, depending on the needs of the individual or family.

Scout understands the importance of storage and the Kenai’s 7.6-foot floorplan features a lot. An interior wardrobe, a gear locker with 10 cubic feet of space, the option for dual hanging storage bags, and plenty of shelving allow users to organize gear and take everything needed on longer trips. In addition to more storage space, the Kenai offers a 60×80-inch queen-sized bed, while the L-shape convertible lounge easily transitions into two single beds at night. An optional roof top tent adds to the total sleeping capacity of the camper.

The Kenai supports four-season travel with a space heater and robust insulation and will last for generations thanks to Scout’s rugged aluminum, exo-skeleton framing and no-wood composite structural panels that will never rot. Pricing for the Kenai starts at an affordable $23,625.

The Scout Kenai is now available for pre-order at www.scoutcampers.com. Scout Campers is a division of Adventure Manufacturing, maker of Adventurer and Eagle Cap truck campers, and are sold at top dealerships nationwide. 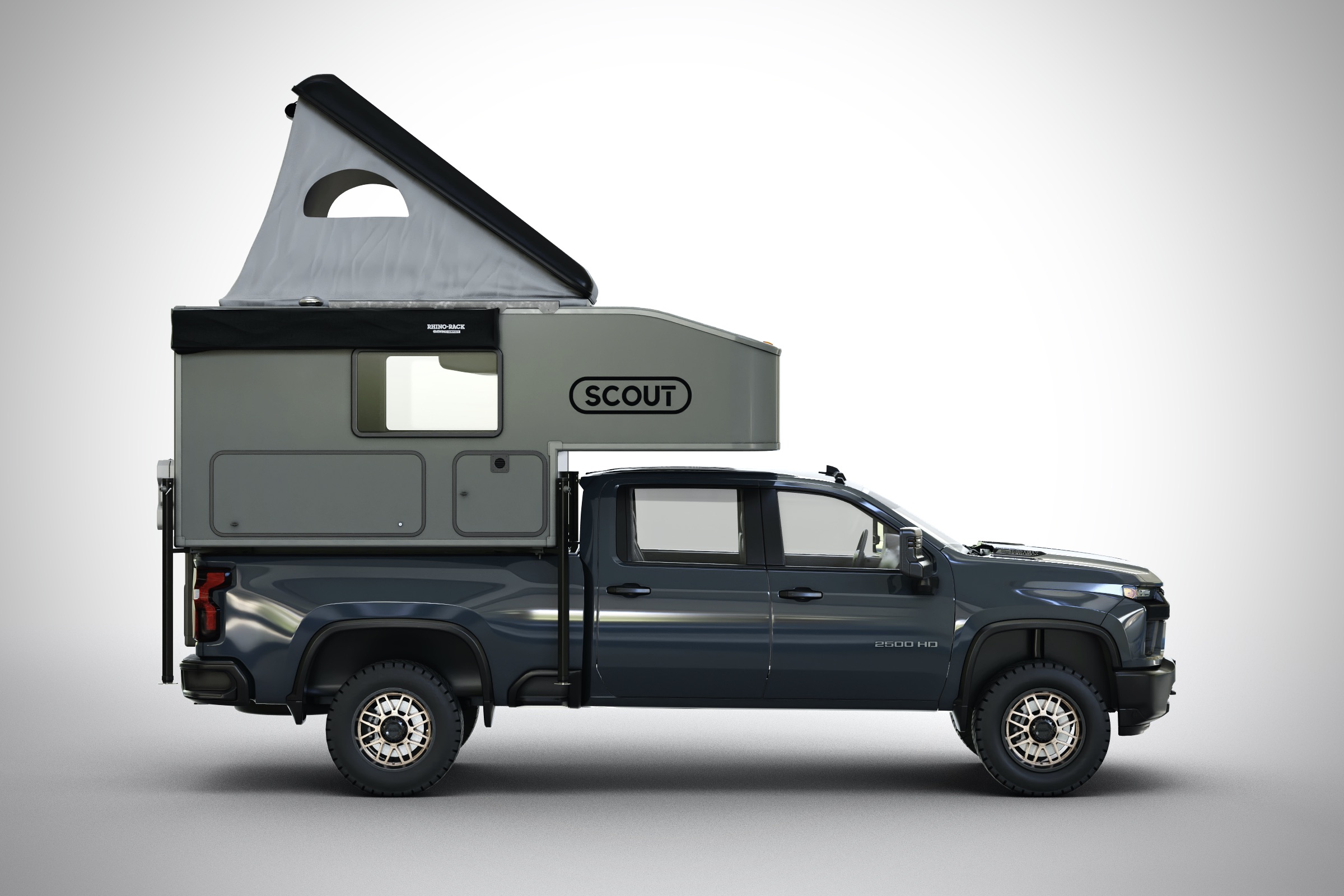 Best Truck Campers for Family Fun and Adventure in 2022

Looking for a family-friendly truck camper for family-size fun and outdoor adventure? You’re in luck. The industry offers numerous campers that can be enjoyed by families of all sizes. Researching the dozens and dozens of [read more]

Adventure Manufacturing, Scout Campers launched the second model of its fleet recently—the Yoho 6.0—designed specifically for the growing mid-size truck segment. According to the press release, the Scout Yoho is like a backpack for a [read more]

It’s no secret that we are fans of the new Scout Olympic truck camper by Adventure Manufacturing. We were able to see one in person recently at Tom’s Camperland in Avondale and we were very [read more]