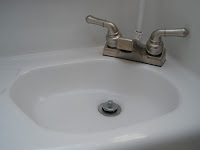 I received an email this morning from a Canadian Wolf Creek 850 owner who asked where the winterizing system’s antifreeze intake is located. Even though it’s now April, I thought that was a great question that I really hadn’t addressed yet on this site. Better late than never. The winterizing system, consisting of the separately located antifreeze intake and water heater bypass valves, comes standard in all RVs made by Northwood Manufacturing. The system is a great feature to have, especially for those who live in northern climates or at higher elevations where freeze damage can ruin the plumbing in your RV. But even here in the desert, temperatures can sometimes plummet to the low 20s making winterizing necessary.

Now on to the winterizing system. The Wolf Creek 850’s antifreeze intake valve and hose assembly is located under the step leading to the cab over area. In order to find and access this assembly, you must first remove the plastic storage bin located underneath the step. Two wood screws will release this step. Yes, the intake valve and hose assembly is in a difficult to find location, but it makes sense when you realize that all of the fresh water tank plumbing is located in this one area.