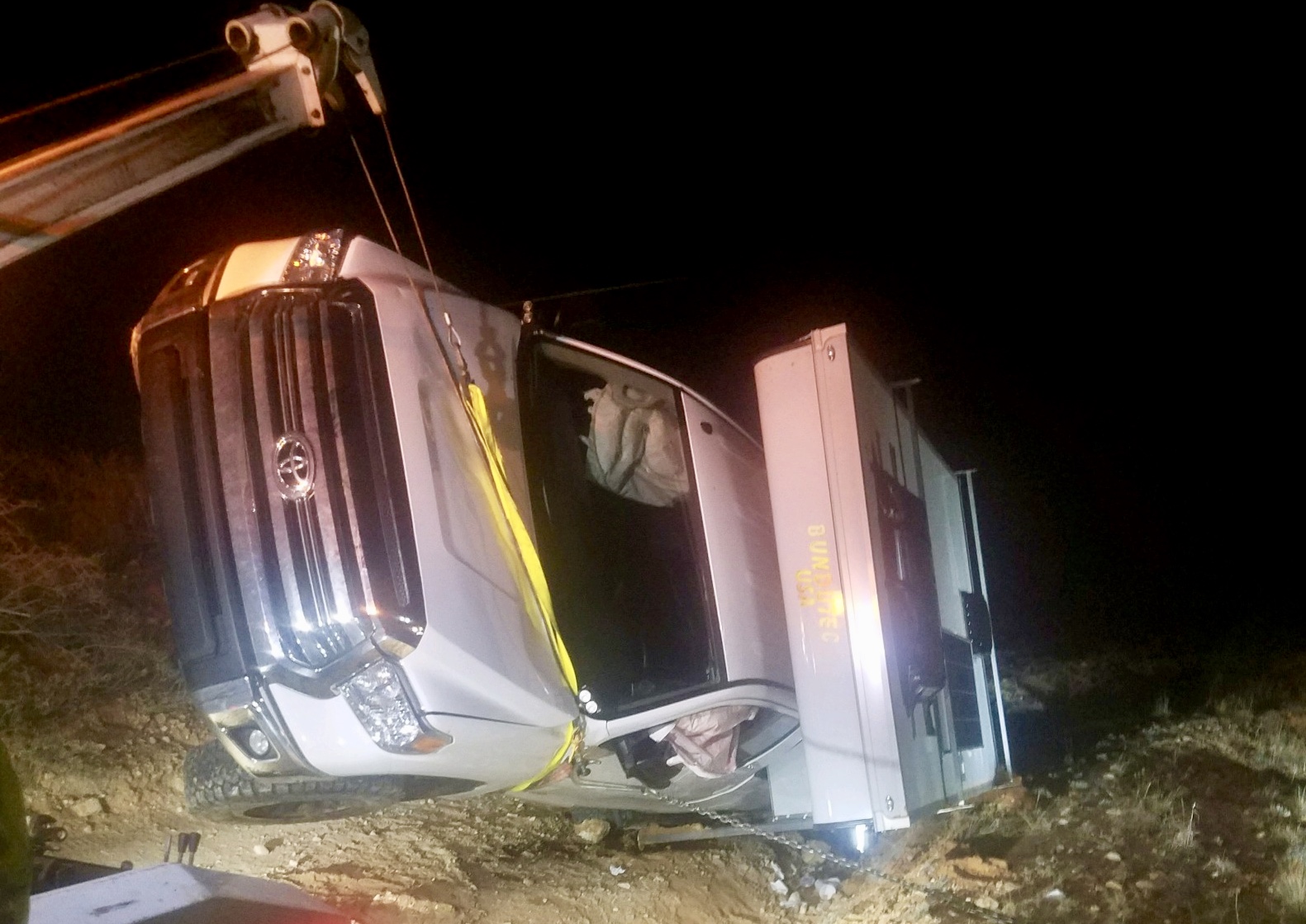 It’s not everyday that one suffers a truck camper rollover on an outing, but this is exactly what happened to John and Kara Beh on a recent trip to Sedona, Arizona. Fortunately, the couple suffered no injuries when their 2017 Toyota Tundra and 2019 Bundutec Sable flipped over on to its side, but they did learn some valuable lessons, lessons that are applicable to the entire truck camper community.

“We have a tradition on my wife’s birthday we go camping every year in January her birthday weekend,” John explained. “We were looking for places to camp. We normally go up to the Grand Canyon or back up in that area, but because the weather was so cold we decided to stay closer to home maybe go a little further south where it was a little warmer. So we planned on doing one day of camping in the Sedona area and then going down to the Cottonwood/Verde Valley area and camp down there then loop back up to Flagstaff where we live.”

“There were a bunch of closures and a bunch of bad road areas in town because of the weather, so we decided to go down a road that we’ve been down before down by Beaver Head Flats. We had gone maybe 2 miles and had gone through two sets of gate-keepers and past a few wash-out areas. We had gotten up to a third one and it was a lot deeper and a lot more than I was comfortable doing in our Tundra. So we did the six-point turn and was coming back out through a gate-keeper that had a wash-out. The wash out required that you bank up on the passenger side to get through it rather that going through the middle of the road where it was high-centered.”

“We took the passenger side up on a slow creep, maybe 5 mph, when all of a sudden, boom, we went over. There’s a debate whether I got the angle up and triggered the side curtain air bags, which caused me to yank the wheel and tip us over, or we were tipping over and the air bags deployed because the air curtain air bags on both sides on the truck deployed, but not the front or rear ones. The camper went over on its side, we were buckled in, it was a bit shocking, but not super dangerous.”

John and Kara, who both work as registered nurses in Flagstaff, were able to extricate themselves out of the flipped-over truck and assess their injuries. Fortunately, the accident scene was within visual range of the main road where several people stopped by to offer their help. Because their injuries were minor, the couple waived transportation to a hospital and the because it was a non-injury, single-vehicle accident the county sheriff issued an incident number for insurance purposes and left. Since the incident took place off-road, they had the option of getting help from friends or going with a professional recovery service. The couple opted for the latter due to the location.

“We found out later that the air bag coming down had ended up breaking some bones in my left hand and left wrist and then my wife had suffered a mild concussion from loose debris that was in the back seat that ended up flying around and hitting her. But all in all for an accident on a dirt road, we were pretty lucky and pretty happy that we weren’t hurt worse than that. We were amazed at the number of people who stopped to render aid, and asked how we were.”

As you would expect, recovering a flipped-over truck camper isn’t easy, even in the best of circumstances. It’s even worse if the accident occurs off-road where many of us like to explore and play. Canyons, washes, and narrow, mountains roads are beautiful places to explore, but they can also make recovery even more difficult due to the uneven and often cramped terrain.

“The angle was awful, it would have been hard to pick a worse place to do it. I had a hill that climbed up steep on one side and I had a drop-off into a river wash on the other. The road itself wasn’t dangerous, but there was no room for a vehicle to get around it on either side and I tipped it almost perfectly onto its driver side almost in the middle of the road. After calling around, they finally sent Stix Men out of Cottonwood, Arizona to recover our truck and camper.” 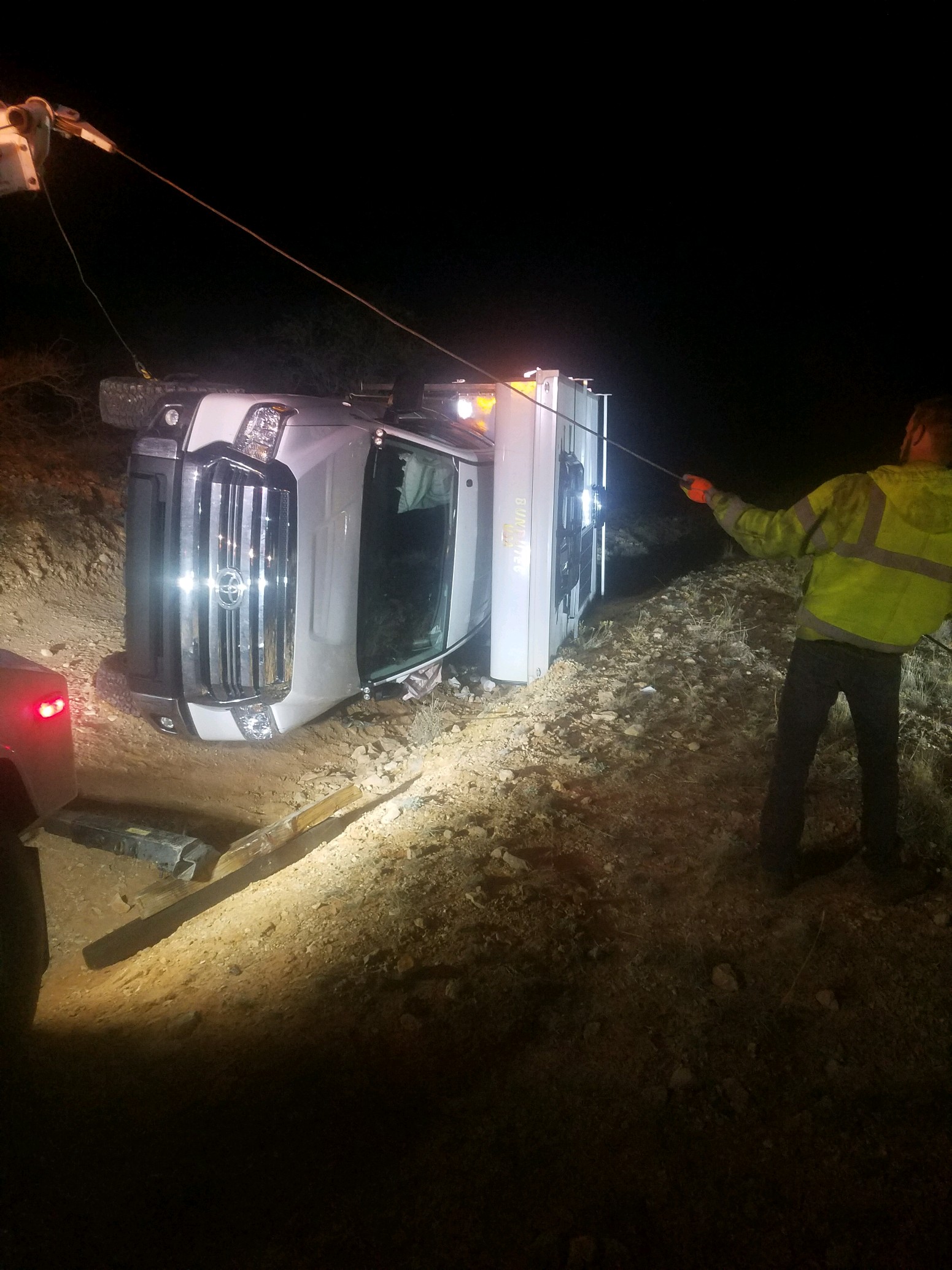 “Those guys were amazing. They said in their experience anytime a camper is flipped over on the back of the truck, its destroyed to the point where they just take chain saws to it, cut it off, and then flip the vehicle over. They never had a camper go over, especially on a dirt road where it was salvageable, let alone hardly even hurt. The camper was pretty much holding the truck up on one side.”

“They brought out three wreckers to do the job. They did a three-to-one pulley system using the wreckers, one in front, one below, and one above. So they basically wrapped and lifted up my  truck and camper, pivoting it on its rear driver side wheel, just picked up the whole camper and truck and all onto that wheel and then pivoted over back onto its tires. They did an amazing job, doing this multi-angle recovery. They spent probably five hours getting it all setup, getting it all flipped over, and getting me towed back to Flagstaff. What’s amazing is that we did most of this recovery at night in the dark.”

Amazingly, the camper suffered very little damage from the roll-over, a testament to the quality construction of Bundutec’s rugged, wood-frame campers. John was able to transport the camper to the Bundutec factory in Raymond, Iowa to get what little damage was done to the camper repaired and to get the propane and electrical systems checked out for safety reasons.

“I twisted one of the lifters. In the interior, not a counter was cracked, nothing was broken, nothing was chipped or out of line. Nothing. Exterior, there’s some scratches right along the upper side where it was resting and I bent one of the rear mounts for the lifter. The rear lift jack mount got tweaked a bit, but nothing serious. It should be fine. The Truma Combi was fine, the electrical system was fine. The double battery tray took out the door on that side due to the weight of the batteries hitting it. There was very little damage to the camper, which is really surprising. Most of it was cosmetic.”

Fortunately, the recovery and damage have been easy to deal with. And, of course, the couple is grateful that nobody was hurt in the rollover. But dealing with their insurance company, State Farm, has been a real headache. Apparently, the local insurance agent had incorrectly written their policy to cover a basic camper shell not a truck camper.

“My agent made a mistake,” John explained. “He had written it up to cover a standard truck shell, not a truck camper. The national office said that this was something that should have been clarified with our local agent. And so they bounced it back and forth and basically denied the claim completely. They also said that we didn’t give them everything that we were supposed to provide like VIN numbers and pictures. I found out recently that two other people in Flagstaff had problems with that same agent with denied claims and having troubles with that office, so today I switched over to USAA. State Farm has been terrible with the way they treated us. We had a perfect driving record for 15 years, but it didn’t matter.”

Unfortunately, we see this often with insurance claims. We all know that the truck camper is different and that it offers a number of benefits over other types of RVs, but this uniqueness also brings with it misunderstandings when it comes to properly insuring one. When you tell an insurance agent that you have a truck camper, they usually picture either a travel trailer or a camper shell in their mind, so it’s important that they understand exactly what needs to be insured. The best way to clear up any misunderstandings is to send photos of your camper and provide serial numbers. So what’s the bottom line? What advice does John have for readers who own truck campers?

“Get everything in writing, go above and beyond what’s needed. Get pictures, make sure you have everything in writing, stating the exact coverage that you have for your camper and what’s required for it, because it changes so much from state to state. Make sure you also go with a company that insures truck campers and understands what a truck camper truly is. One of the problems I ran into is that my agent in Flagstaff had either never insured a truck camper or knew how to properly insure one. That was one of the big reasons on why I ran into the problems that I did. So even it means maybe paying a few extra bucks a year going with an insurance company that understands insuring actual truck campers versus shells, it’s worth it,” he said.

Innovation is the lifeblood of any industry. Yet, from the 1980s to 2004, the truck camper industry was anything but, with the same floor plans, construction methods, and appliances offered in nearly every model. If [read more]

Washington-based Torklift International just announced the release of the newest edition to its heavy-duty towing line—the SuperHitch Cannon, the only receiver extension for new Ford trucks. “Since 2017 Ford Motor Company has been producing Super-Duty [read more]

Progress is being made on our new Bundutec Roadrunner. Offering the latest technology, this custom, all-new camper will feature the same general layout as our old Northstar Laredo SC truck camper, yet will offer several [read more]