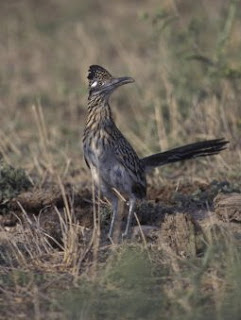 An enduring symbol of the American southwest, the Greater Roadrunner (Geococcyx Californianus) is a fascinating and unique bird of prey. It’s known to millions as a purple and
light-blue feathered Warner Brothers cartoon character who is constantly being chased by his arch nemesis, Wiley E. Coyote. The real life Roadrunner possesses neither bright, colorful plumage nor long, ostrich-like legs as portrayed in the cartoon, but it is extremely intelligent, and does prefer to run at blazing speeds on the ground rather than take to the air like most birds.

A member of the cuckoo family, the crow-sized Roadrunner is a rather unique and unusual looking raptor. Measuring up to 24 inches from its beak to the end of its tail, it stands about 10 inches tall, and weighs nearly a pound when fully grown. In photographs the Roadrunner’s feathers appear to be speckled black and white, but a closer examination of the bird’s plumage reveals a wide-range of iridescent colors ranging from olive, tan, bronze, and dark steel-blue, to dark purple, gray, and brown. It sports a comically large beak with a small hook on the end and a distinctive crest atop its head which it raises when alerted, agitated, or courting. It possesses a long tail which the bird uses to stop and steer itself when traveling at high speed. And with its strong 2.5 inch long legs and two forward- and two backward-pointing toes, the Roadrunner can hit speeds up to an amazing 20 miles per hour. While the Roadrunner does possess wings, they are small and rounded and capable of only short flights. The gender of the bird is practically impossible to tell from looks alone.

The Roadrunner is an extremely hearty bird, uniquely adapted to live in the heat and cold of the American southwest. It gets its water primarily from its food and possesses a digestive tract able to reabsorb moisture from its feces before excretion. It can also eliminate excess salt through it nostrils like some other birds. Amazingly, the Roadrunner possesses the ability to conserve its energy at night by lowering its body temperature to combat the desert chill. Then in the morning, the clever bird will expose a patch of dark skin on its back to the warm rays of the sun in order to raise its body temperature.

The Roadrunner is an opportunistic omnivore with a voracious appetite and will basically eat anything it can catch, kill, and swallow. Its diet consists of small birds, lizards, rodents, insects, scorpions, and tarantulas, as well as snakes, fruit, seeds, eggs, and carrion. With blazing speed and lightning quick reflexes, the Roadrunner is an adept bird of prey which can snatch a hummingbird in flight and subdue the deadly and fearsome rattlesnake. Pretty Impressive! With such a diverse diet, the Roadrunner needs to be the master of several techniques for detecting and capturing prey. One such technique involves wing-flashing. The bird does this by rapidly extending its wings outward, revealing the solid white patches of feathers, which startle and cause its prey to either scurry from their hiding places or become distracted. Once the prey is seized with its beak, the Roadrunner will bash it against the ground numerous times until dead.

While the Roadrunner is a wonderfully skilled hunter, it does have predators.Since the bird prefers to build its nests in low lying bushes and cactus, this sometimes exposes its eggs and nestlings to foraging snakes, skunks, and racoons. The blazing speed of the adult Roadrunner makes it extremely difficult to catch, but it does occasionally succumb to cats, hawks and, yes, even coyotes. Since the Roadrunner doesn’t have large wings and doesn’t rely on flight, the bird is non-migratory and must endure all four seasons in its territory. This exposes the bird to sometimes harsh winters that it is unable to adapt to and overcome. The lifespan of the Roadrunner is about seven years.

Known primarily as a southwestern bird, the Roadrunner can also be found in lesser numbers beyond that region. It can be spotted in California, Nevada, Arizona, Mexico, Utah, Colorado, New Mexico, Texas, Oklahoma, Kansas, Louisiana, Missouri, and even in Arkansas. The remarkably adaptable bird can exist in elevations ranging from 250 feet below sea level in Death Valley to 11,000 feet in the Rocky Mountains of Colorado, but it generally prefers to live below 7,000 feet. The habitat where the Roadrunner can be found include desert scrub, chaparral, savannah, open brush lands, open woodlands, wooded stream corridors, and even among humans in densely populated urban and suburban areas. That the bird is able to live in such a large area in both the scorching heat and in freezing weather says much about its adaptability and accounts for its healthy population.

The male of the species takes the lead in the courtship and mating ritual. First, the male will offer gifts of lizards, spiders or small snakes to the female. Other courtship behaviors by the male include cooing, bowing, wagging its erect tail from side to side, and a dance which involves a jump into the air and hover over the female. Once the female accepts the male’s overtures, the two will remain a pair for the remainder of their lives. After the nest is constructed and the eggs laid (each clutch numbers three to five eggs), the two will take turns to incubate the eggs. After the eggs hatch, the pair will raise their young over a period of about three weeks. Roadrunners may nest up to three times a year, depending on the climate and abundance of food.

The Roadrunner has long been revered by native American tribes. The Hopi and other Pueblo tribes believed that the Roadrunner was a medicine bird that could ward off evil spirits. This protection came from not only the bird itself, but also from art work displaying the bird’s unique X-shaped footprints. These tribes believed that the Roadrunner’s footprints threw off evil spirits because they didn’t know which direction the birds were headed. Rock art, showing Roadrunner tracks, have also been found in Anasazi and Mogollon cultures. The feathers from Roadrunners were also believed by Pueblo tribes to hold special powers and were used to decorate the cradles of their children to protect them from evil. In the Aztec culture, it was even considered good luck to see a Roadrunner.

So when visiting the Southwest or other areas where the Roadrunner can be found, make sure to keep a sharp eye out for this fascinating bird of prey. If you’re fortunate enough to spot one, you’ll be sure to enjoy your time watching and listening to the calls of this beloved bird. And who knows. You may even receive good luck.

Like Loading...
About Mello Mike 729 Articles
Mello Mike is an Arizona native, author, and the founder of Truck Camper Adventure. He's been RV'ing since 2002, is a certified RVIA Level 1 RV Technician, and has restored several Airstream travel trailers. A communications expert and licensed ham radio operator, he retired from the U.S. Navy in 2004 as a CWO3 after 24 years, worked in project management, and now runs Truck Camper Adventure full-time. He also does some RV consulting, repairs, and inspections on the side. He currently rolls in a 4WD Ram 3500 outfitted with a SherpTek truck bed with a Bundutec Roadrunner mounted on top. - KK7TCA
Website Instagram YouTube