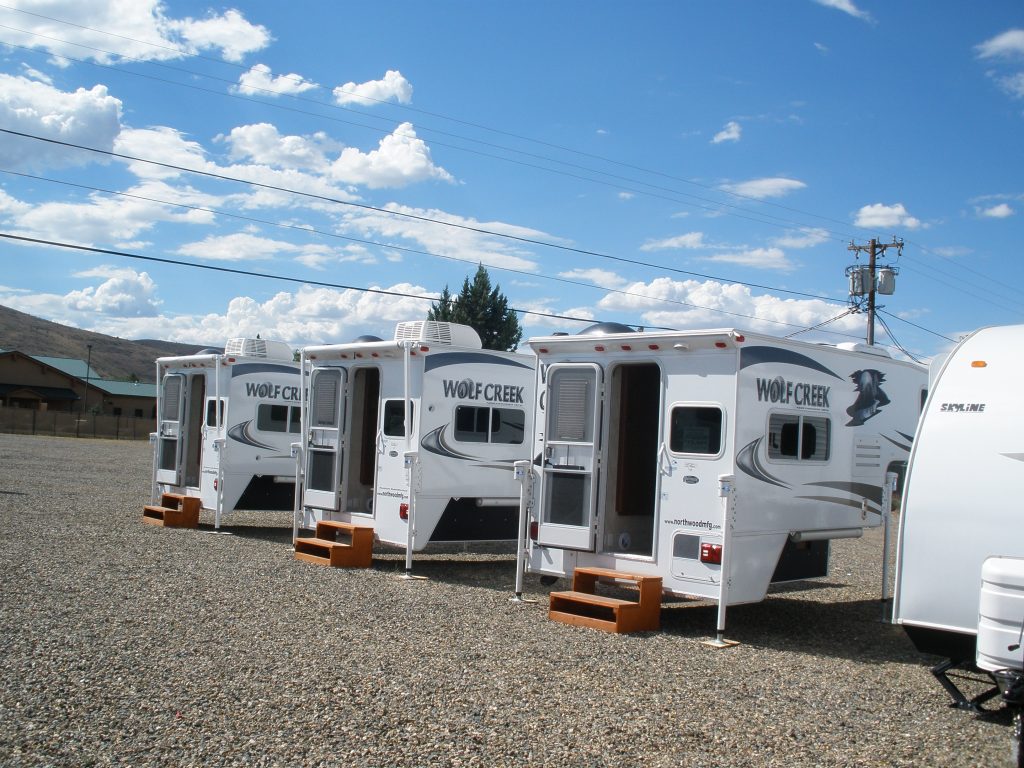 An alarming trend has recently taken place in the truck camper industry. Many manufacturers are now building multiple slide-out campers–one model has as many as four–weighing in excess of 6,000 pounds. In the mind of these manufacturers, bigger is better, but that isn’t always the case, especially when you consider the limited payloads of today’s pickup trucks. That’s why I found it refreshing when Northwood Manufacturing, the builders of the well-regarded Arctic Fox line of truck campers, decided to release a new line called the Wolf Creek, a lighter, hard-side, non-slide-out style of truck camper. This is a review of the company’s Wolf Creek 850N, the short-bed version of this truck camper.

Sporting a “dry” weight of 2,008 pounds and a fully loaded “wet” weight of 3,000 pounds, the Wolf Creek 850N is a good 1,000 pounds lighter than a comparable sized Arctic Fox truck camper. How did the company accomplish this? Well, for one they reduced the framing size from two inches to one inch and made the roof much thinner, too (you won’t be able to load 32 persons on a Wolf Creek roof). Reductions were made to the interior as well. Fortunately for the consumer, these weight saving measures doesn’t mean you have to sacrifice build quality. Indeed, the Wolf Creek is the built on the same assembly line and incorporates the same strict, quality control standards found in the Arctic Fox line. Indeed, the Wolf Creek 850 truck camper is so light you can safely mount the short-bed version on a three-quarter ton truck and the long-bed version on a heavy-duty half-ton pickup truck with the standard cab (these have payloads over 3,100 pounds). 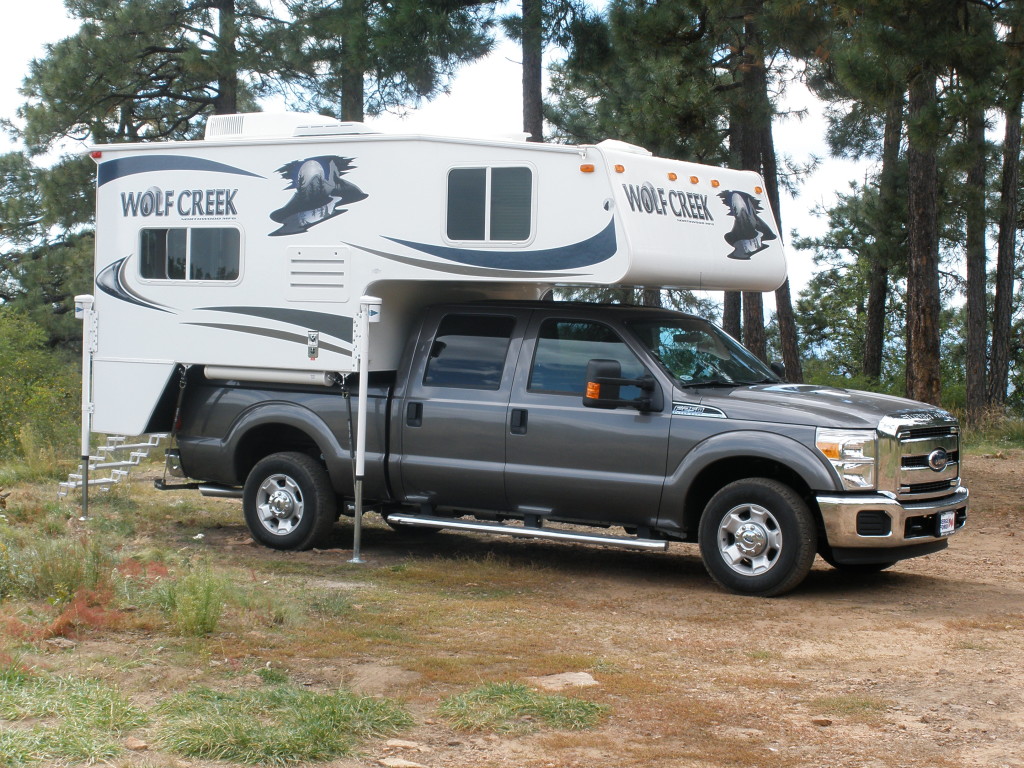 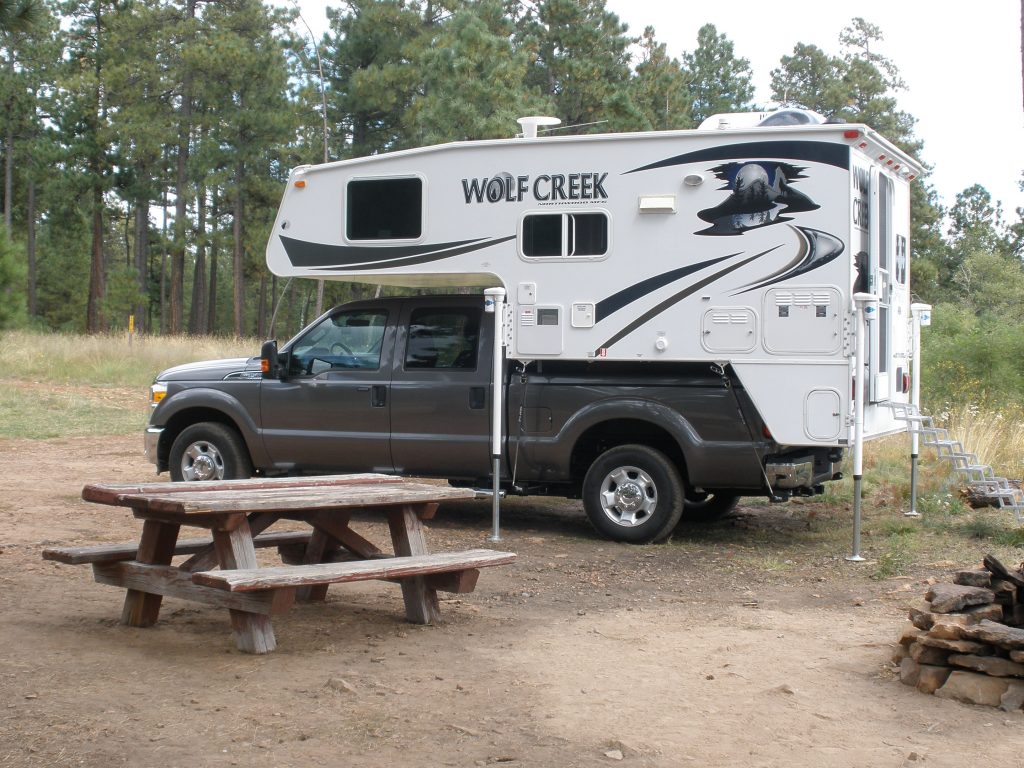 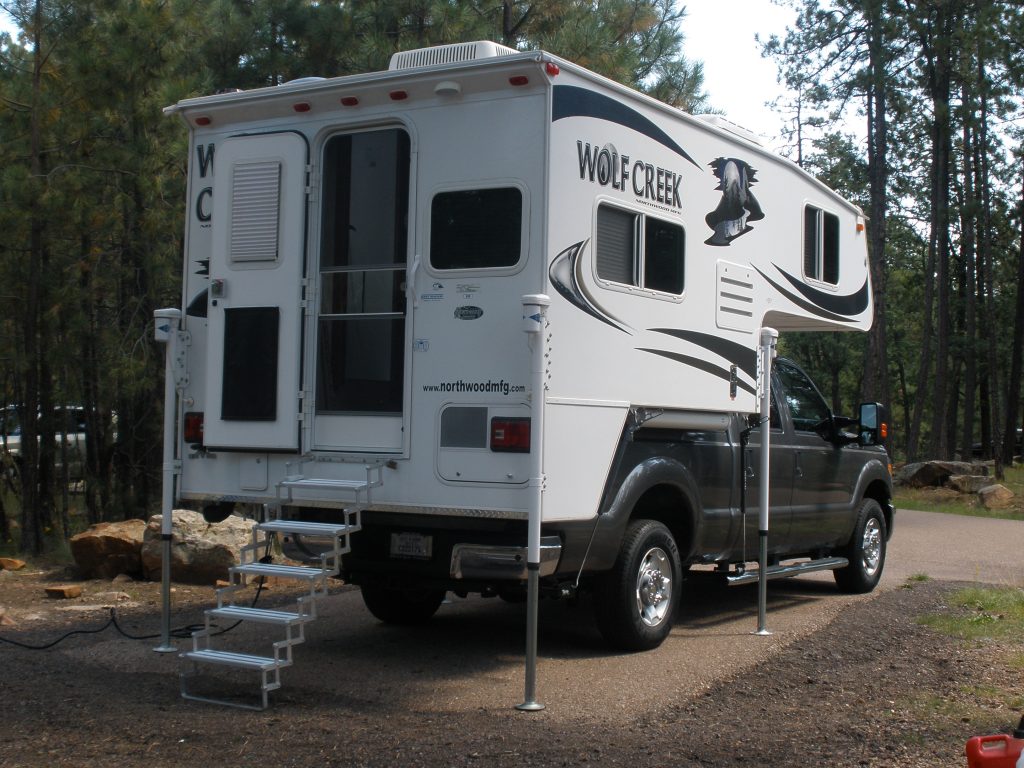 The cherry interior of the Wolf Creek 850N is impressive. Indeed, at first glance the interior looks practically identical to the luxurious Arctic Foxes. If you look closely at the interiors, however, you will spot the differences between the two; the Amana three-burner cook top is standard in the Wolf Creek while the full range and oven is an option. The refrigerators in the Wolf Creek are smaller than those typically found in the Arctic Fox, too, with the 3 cubic foot model standard and the 5 cubic foot an option. You’ll also notice that sliding cabinet doors are used in some of the overhead kitchen cabinets instead of the heavier hinged doors, and a few storage areas in the Wolf Creek have no doors at all. In spite of these weight saving measures, the cherry interior of the Wolf Creek 850 is beautiful and has a very warm and luxurious feel.

The Wolf Creek 850 provides owners with a tremendous amount of storage. A huge selling point for us were the driver and passenger side access doors near the floor. These doors provide access to the large storage areas in the truck bed located in between the cab and wheel wells. This should be a standard item in all truck campers, but many manufacturers overlook this simple, yet welcome addition. And while the Wolf Creek 850 offers loads of storage, you can increase storage capacity even more by adding or subtracting the right options. I recommend getting the combo bunk storage unit and the under range pull out drawer and pass on the microwave oven. For outside storage, get the generator ready option, but pass on the generator. Following this advice will increase your storage options exponentially and in a truck camper you can never have enough. 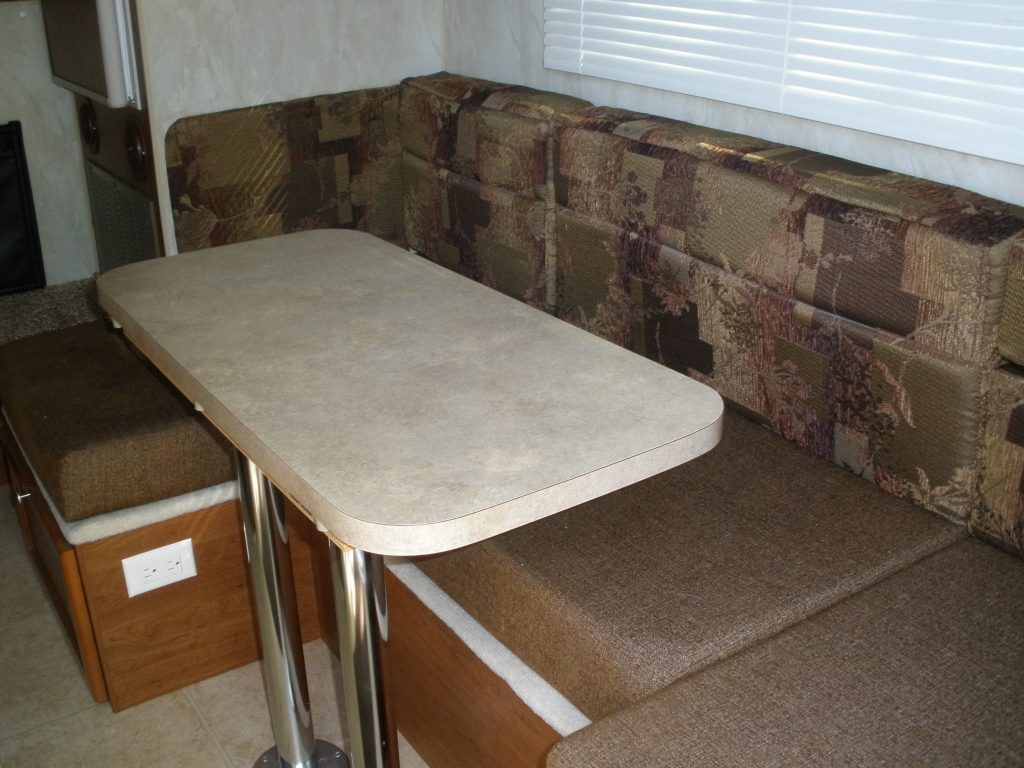 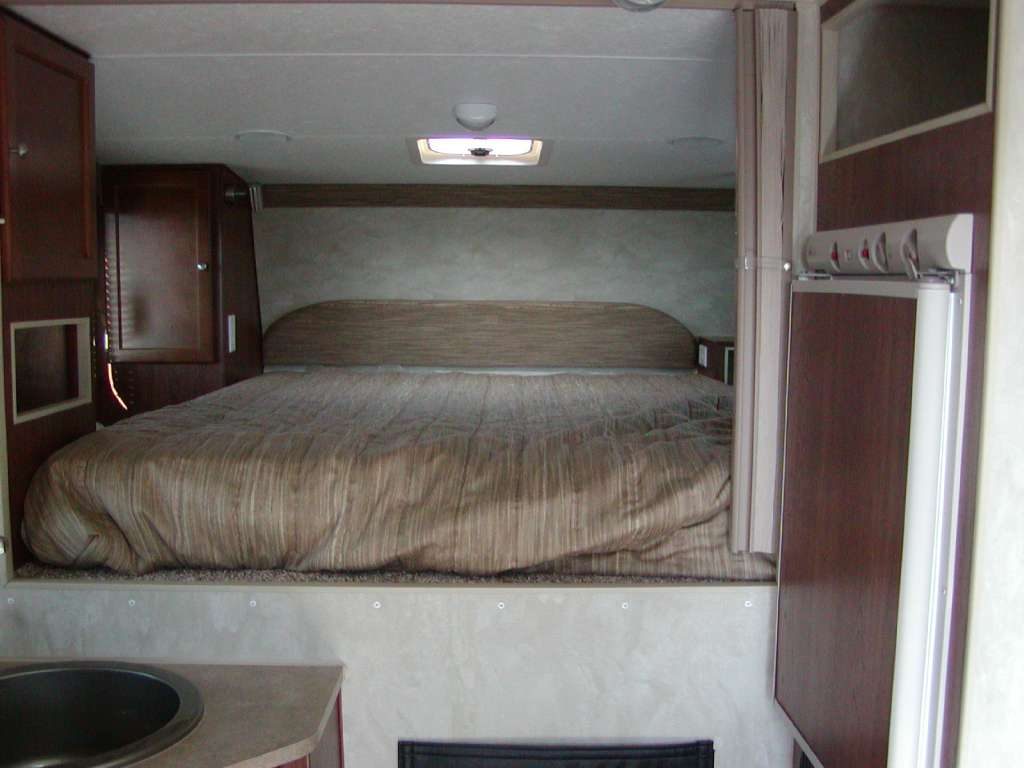 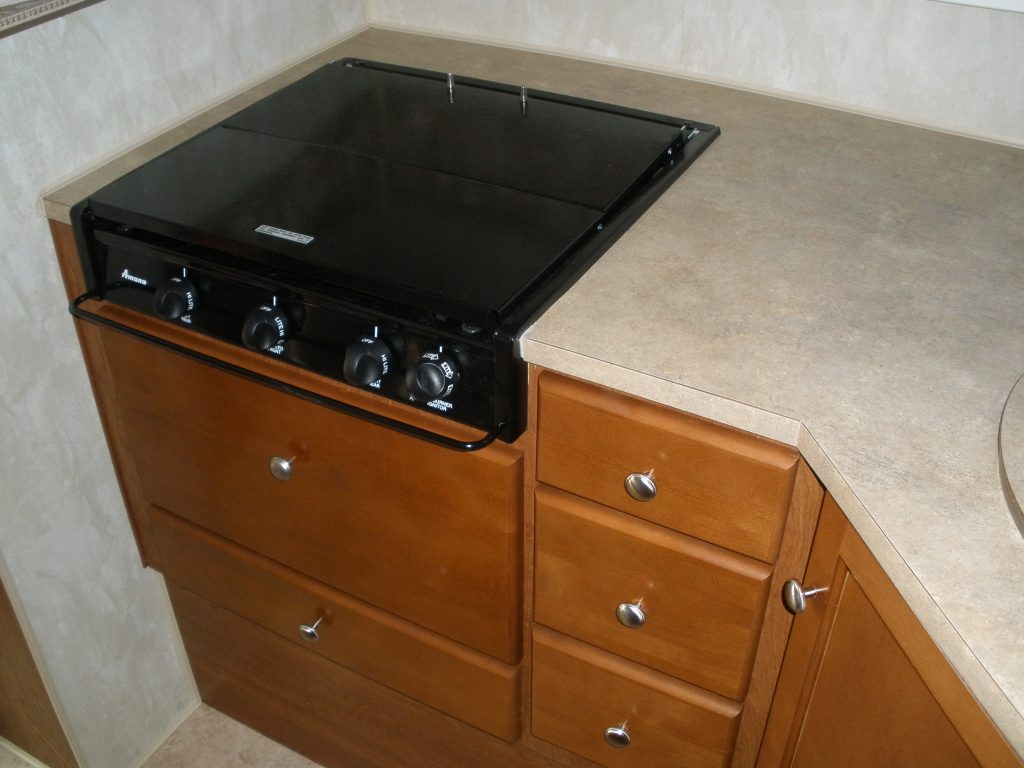 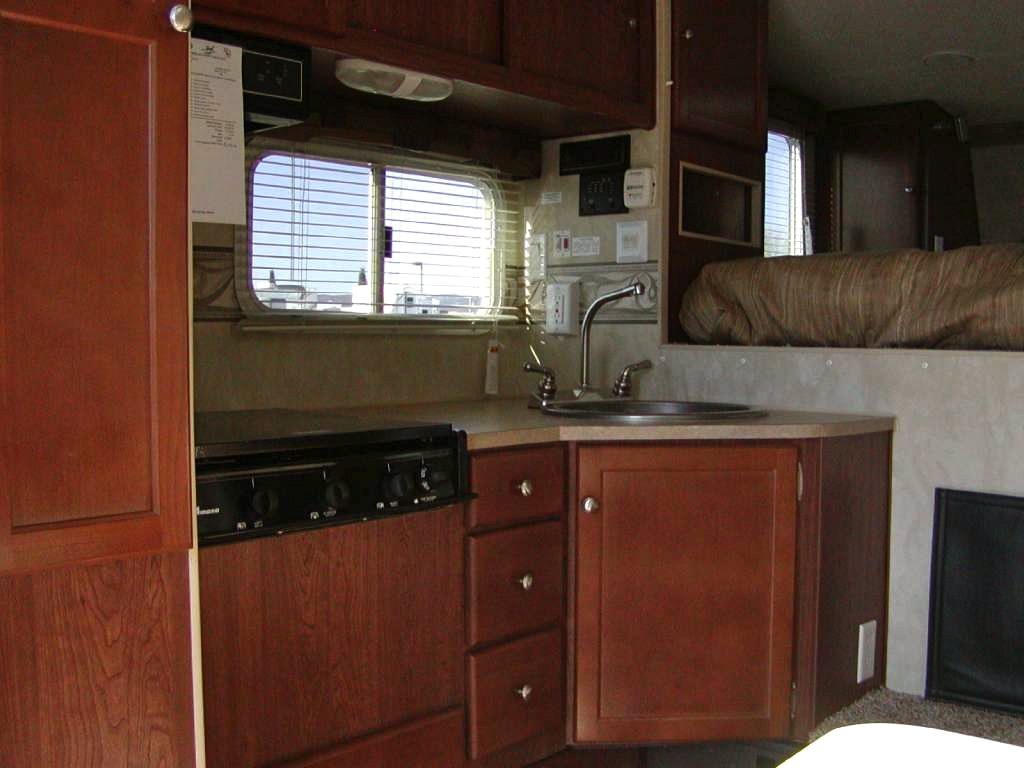 The wet bath is large for a camper this size, and is actually the same one used in the Arctic Fox 811. The wet bath enclosure is made from one-piece gel coated fiberglass with no gaps or seams requiring caulking, a big plus in my book. The bathroom features a large, mirrored medicine cabinet, two towel racks, and a 12 volt powered vent fan. Perhaps the most visible feature in the bathroom is the raised dome skylight. This skylight serves the dual purpose for not only providing natural lighting but also additional headroom for those who are over 5 feet 6 inches tall. I’m 5 feet, 10 inches tall and I can actually look outside and see everything surrounding the camper. It’s a pretty cool feature being able to do this without having to actually step outside.

The only negative with the bathroom is the fact it requires you to take a large step up (17 inches to be exact) to enter it. Not a big problem if you’re light and nimble on your feet, but if someone in your family is physically impaired it can be a big issue. This large step wasn’t a deal breaker for us, but it might be for you. If you’re in the market for a Wolf Creek 850 model, it’s probably best to take a look at one before committing to buy. Fortunately, Northwood Manufacturing has addressed this issue in newer models by installing a flip-out step.

Unlike the booth dinettes found in most truck campers, the Wolf Creek 850 dinette is very long, 78 inches to be exact, and can easily accommodate a grown adult when used for sleeping. I’m almost 6 feet tall and there’s plenty of room for me without having to get into the fetal position. This is almost unheard of nowadays with most RVs, especially in truck campers. The dinette is a shallow U-shape and can seat four adults very comfortably when used for meals or socializing. The sliding dinette table can be moved in or out and really helps when getting in or out of the dinette.

The standard features really set the Wolf Creek 850 apart from truck campers made by other manufacturers. These include a battery cutoff switch, metal door latches, porcelain lined water heater tank, full-length gutters with extra long downspouts, as well as a marine grade 25 foot, 30 amp power cord. Additional standard items include two extra thick front rubber bumpers, a fresh water winterizing system, a high-quality detachable slinky water hose and nozzle for the outside shower, and two swivel mounted reading lights in the bedroom. And while Northwood advertises that the Wolf Creek 850 features seven 110 volt outlets, there are actually eight outlets in my Wolf Creek 850N (seven indoors and one outdoor). 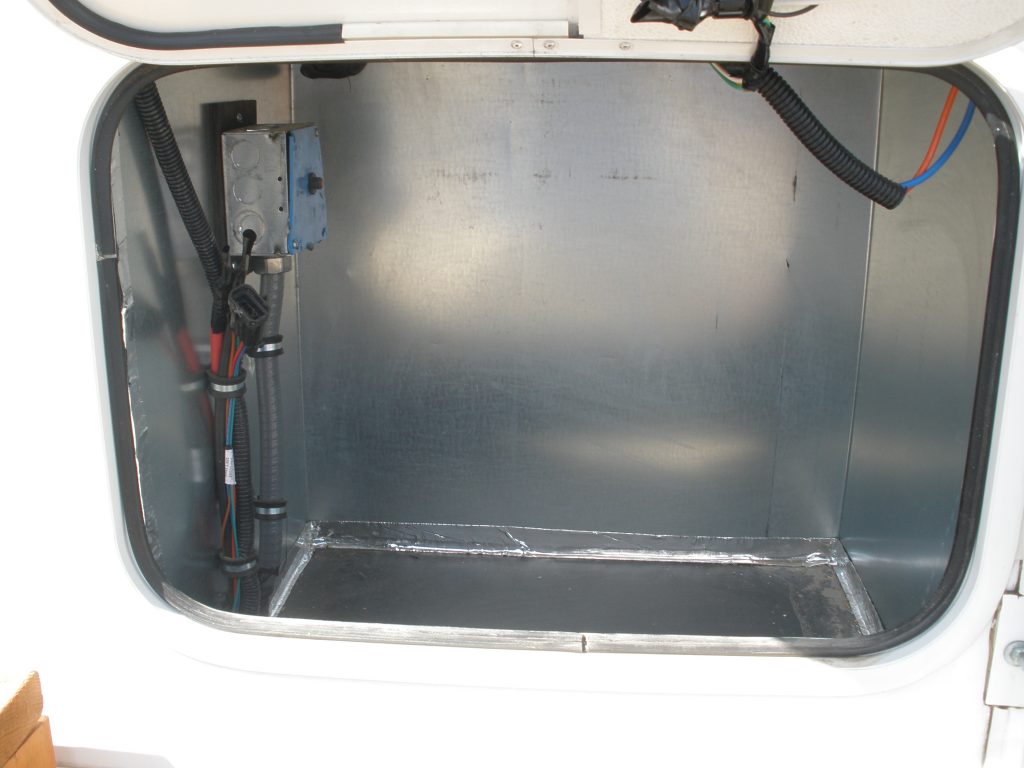 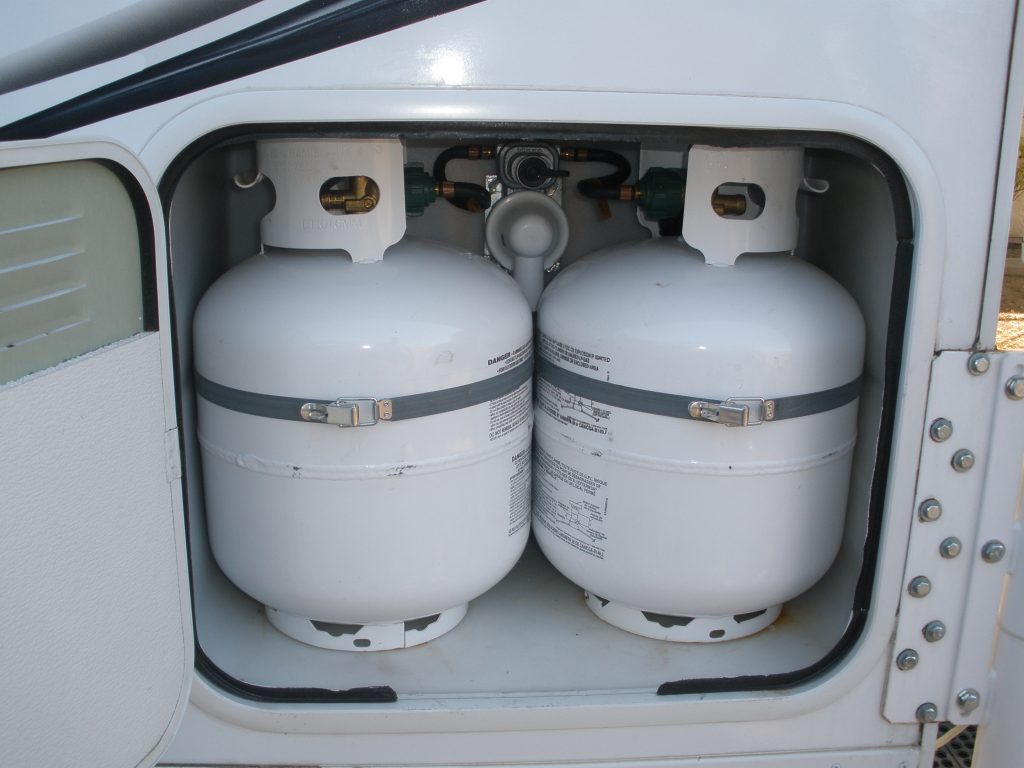 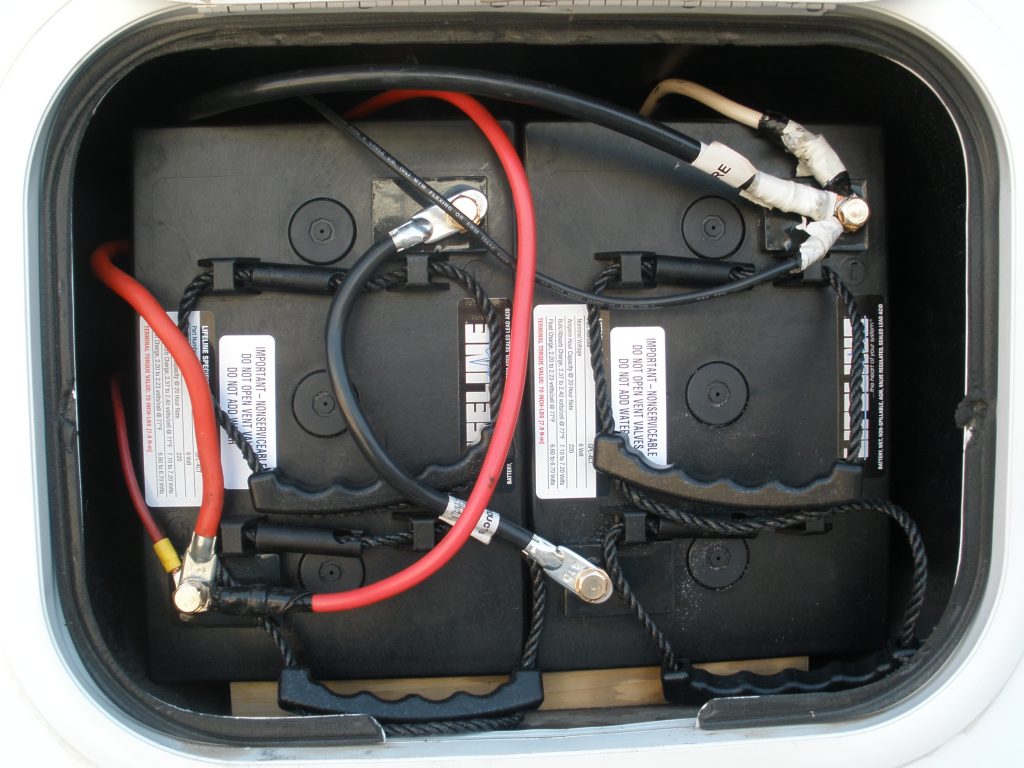 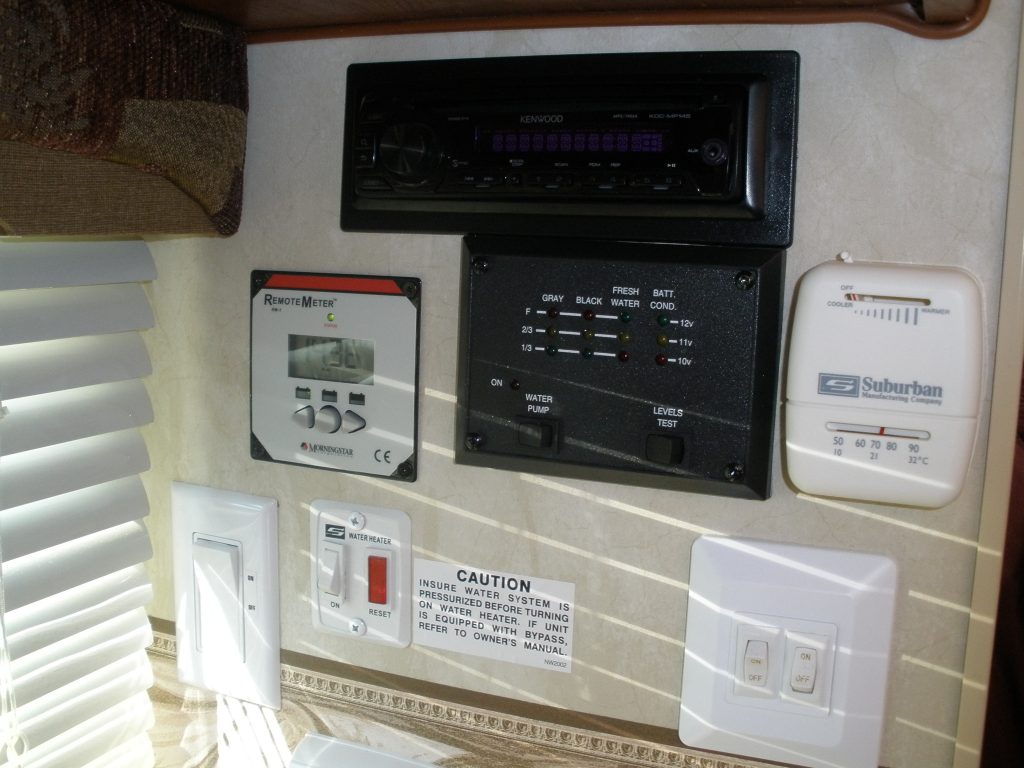 One aspect about the Wolf Creek 850N that I really like is that the camper is pre-wired for practically any electronic or electrical option you can imagine. These include wiring for a generator (if this option is ordered), satellite system, TV antenna, solar panel, stereo system, a Fantastic Vent fan, and power jacks. Doing this sure makes things nice for mod happy owners like me. I’ve already used the pre-wiring to install a solar power system. Unfortunately, my 850N did not come pre-wired for the Fantastic Vent fan as advertised. This caused some frustration and additional installation time for this project (fortunately I was able to tap into the nearby ceiling light for the power I needed).

The build quality of the Wolf Creek 850N is first-rate, exactly what you’d expect from the makers of the Arctic Fox. The frame is made of .060 thick aluminum tubing with all joints welded full width rather than weaker spot welds. The walls are further strengthened through the use of what Northwood calls “steel bonderizers,” which provide strong mounting points for the interior cabinets and wall fixtures. But that’s not all. Wood is used inside the aluminum frame at key points throughout the camper to provide even more strength where screws are used. In addition, the basement walls are made of 1.25 inch thick plywood (the thickest in the industry according to Northwood) and employs aluminum trusses which provide even more support for the large holding tanks. The Reico Titan jacks, which support this structure, are bolted through the frame not eight to ten times for each jack, like most competitors, but an amazing 20 times.

If you’re an avid boondocker who enjoys camping during all four seasons, then you’ll like what the Wolf Creek 850N has to offer. As mentioned earlier, the camper comes solar ready and has a battery compartment big enough (12 inches tall, 16 inches wide and 14.5 inches deep) for two Group 24, 12 volt deep cycle batteries or two 6 volt AGM batteries mounted on their side. It also comes with two 5-gallon propane tanks (one tank is standard), and large capacity holding tanks (30 gallons fresh, 22 gallons gray, and 20 gallons black). These tanks are much larger than what you’ll typically find in light weight, short-bed truck campers. Better yet, all three tanks are heated for winter camping to prevent freeze damage. Sure, the insulation value of the overall camper isn’t as high as the top-of-the-line Arctic Fox, but it’s still good enough to camp in the winter comfortably.

While the Wolf Creek 850N is loaded with features and is extremely well-built, I do have a few complaints. First, there is only one 12 volt outlet in the entire camper and that’s located in the cabover area where the TV is located. Failing to install an outlet in the lower dinette area is a huge omission. Another complaint–which is more egregious–is the placement of the furnace ducting. No ducting exists in either the cab over area or in the bathroom, two areas which can get quite cold in the winter. Lastly, I’ve found it nearly impossible to remove the propane tanks from the camper to fill them. This means you’ll need to drive the camper to the station to fill them, a big hassle. In spite of these complaints, however, none are a deal breaker. The positives of the Wolf Creek 850 far outweigh the negatives.

So if you’re looking to get out on the road with a well-made, hard side, light weight truck camper then look no further than Northwood Manufacturing’s Wolf Creek 850. It’s light weight, large holding tanks, and plentiful storage means you can explore further and stay longer on your outings. Not everyone wants to lug around a 4,000 pound camper with multiple slide outs that requires more fuel and more money to get where you want to go. The Wolf Creek 850 caters perfectly to this crowd. Now it may have been better if Northwood Manufacturing gave this new and exciting truck camper line a name like “Arctic Fox Lite” in order to leverage the well-established brand name, but this is a minor marketing nit. In spite of this, there’s no doubt about it, Northwood Manufacturing hit a home run with the new Wolf Creek 850. It’s a great way to get on the road without it being a drag on your wallet or on your truck.

BundutecUSA, quality maker of truck campers, portable trailers and roof-top tents, just released a new hard-side truck camper called the Roadrunner. With a dry weight of only 2,450 pounds, the camper is a perfect match [read more]