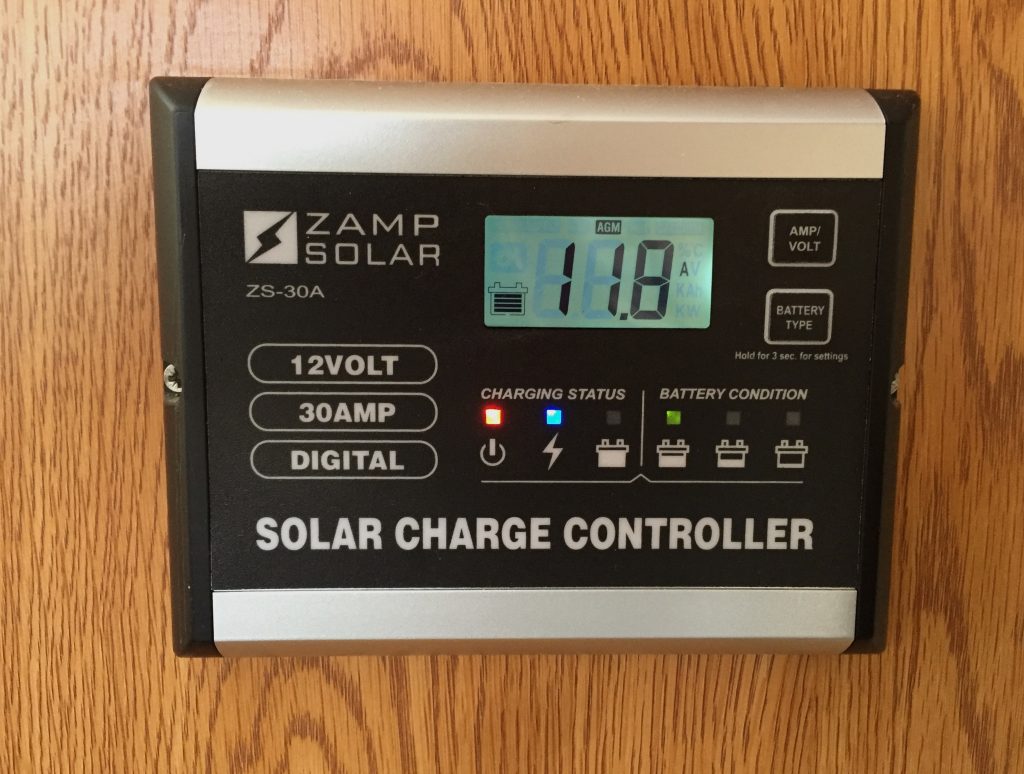 One of the great things about solar power is how easy it is to use. As long as the sun is out you’ll get a free and renewable source of energy that’s not only clean and quiet, but is also good for the environment. Moreover, the solar power system, like those found in today’s truck campers, is lightweight, mounts primarily in out-of-the-way locations, and requires very little maintenance as there are no moving parts. What makes solar power possible is the solar panel itself. Aided by the sun’s rays, the panel converts photons into electrons of direct current electricity. But the charge controller plays an important role in the solar power process, too. It acts as the “brain” for the solar system by regulating the amount of current and voltage being sent to the batteries to prevent them from being overcharged, and in the case of wet cell batteries, boiled dry. One of the more popular solar charge controllers being used in today’s RVs, and the one that we use in the Truck Camper Adventure rig, is the excellent Zamp ZS-30A.

The Zamp ZS-30A employs Pulse Width Modulation (PWM) technology. If you don’t know much about how the PWM charge controller works, it’s pretty simple. It charges by sending a series of short, variable duty cycle charging pulses—like a very rapid “on-off” switch—to the batteries. The PWM controller constantly checks the state of the batteries and automatically adjusts the duration of the charging pulses being sent. When the batteries are fully charged the duty cycle almost falls to zero or “off” nearly 99 percent of the time. Conversely, when the batteries are fully discharged, the duty cycle stays “on” nearly 99 percent of the time. Strengths of the PWM charge controller design include its simplicity, its low cost—the ZS-30A can be purchased for around $125—and its small size (Maximum Power Point Tracking (MPPT) controllers are typically much larger). For these reasons, it’s also the most popular type of controller found in today’s truck camper rigs.

While all PWM charge controllers work essentially the same way, the Zamp ZS-30A offers several features and capabilities not found in your typical PWM controller. First, it provides a five stage battery charging algorithm that not only includes the standard bulk, absorption, and float charging stages, but also an equalization stage and a soft charge stage. Additionally, the ZS-30A offers an easy to read digital LCD screen that displays valuable information like battery voltage, charging current, charging capacity, battery types, and unit fault codes. The controller is also capable of supporting four types of deep cycle batteries—wet cell, gel cell, AGM, and calcium. Moreover, the display panel of the ZS-30A provides six colored LEDs that indicate the charging status as well as the current condition of the batteries. Zamp was able to pack all of these features in an attractive looking, flush mount charge controller capable of handling up to 30 amps of current and 510 watts of power.

The indicators and controls for this American-made controller are easy to understand and use. The “amp/volt” button allows the user to display battery voltage, charging current, and charging capacity on the LCD screen quickly and easily. The latter is especially useful as it displays the number of amp hours harvested during the current day. The “battery type” button enables the owner to select the type of batteries that are connected to the controller. The ZS-30A is compatible with wet cell, gel cell, AGM, and calcium batteries. According the user’s manual, AGM is the controller default for battery type, so if your battery type is different you’ll need to change this setting. It’s very important that the controller is set-up to match your battery type. Otherwise, your batteries may be damaged by charging voltages that may be too high or too low (consult the instructions that came with your batteries for the proper voltages). Moreover, failure to match the controller with a wet cell or calcium battery will deprive these batteries of a periodic equalization charge, a process that prolongs the life and effectiveness of these types of batteries.

The six multicolored LEDs (green, yellow, red, and blue) on the ZS-30A provide valuable information on the charging status and condition of the batteries. The three charging status lights grouped on the left let you know if battery charging is taking place or if the unit is providing a maintenance float charge. The red power light indicates that the unit is “on” or active while the absence of a red power light, of course, means that it’s dark and that the unit is inactive or “off.” During a bulk, absorption, or an equalization charge, the blue charging LED will be lit, while a soft charge is signified with a flashing blue light. Moreover, the absence of a blue charging light and the presence of a green charging status light to the right means that the battery is 100 percent charged and is being maintained with a float charge. This, of course, is a very good thing and what you hope to achieve with your system each day. The remaining three battery condition LEDs grouped together on the right, which indicate roughly a 25 percent, 50 percent, and 75 percent charge, provide an easy to understand graphic display on the voltage state of the battery. The green “75 percent charged” LED on the left will also be lit during a bulk or absorption charge.

What matters most about a solar charge controller is how well it regulates charging and in this all important task the ZS-30A excels. Not only does it flawlessly provide the aforementioned bulk, absorption, and float charging stages, but it also provides an equalization stage for wet cell and calcium batteries and a soft charge stage for deeply discharged batteries. While this may seem like a marketing gimmick, these extra two charging stages perform a valuable service not found in your typical PWM charge controller (note that the Zamp ZS-30A is equipped with a port to connect an optional external battery temperature sensor that adjusts the charging voltages based on the battery’s temperature). The following graph illustrates how these battery charge stages work and interact with each other: 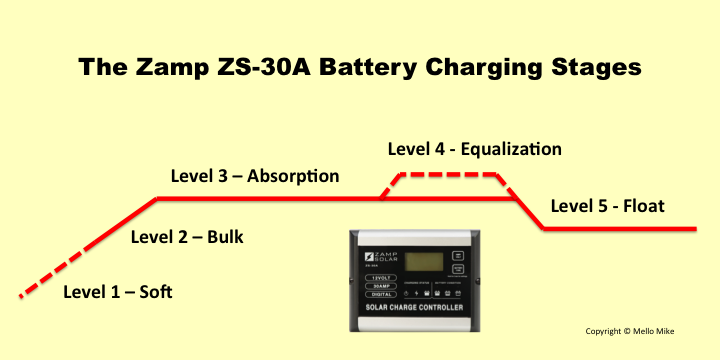 Installing the Zamp ZS-30A charge controller is pretty straightforward. The ZS-30A can be mounted in one of two ways: surface or flush. A flush mount requires at least an inch of depth behind the controller though more is better. Zamp recommends using 40 amp inline fuses on the negative wire on both the “battery” and “solar panel” circuits. Doing this is important as it protects the system components and your investment from shorts and overloads. Wire size is dependent on the length of the runs, of course, but for a truck camper you’ll be fine going with 10 AWG wire between the solar panel and the controller and 8 AWG wire between the controller and the batteries. If you’re unsure which size to use, the user manual provides a handy chart that provides clarity. It’s worth pointing out that, unlike some controllers, the terminals on the Zamp ZS-30A are actually large enough to accommodate 6 AWG wire, the largest wire recommended in their sizing chart. You’d think having properly sized terminals would be standard practice, but you’d be surprised with some of the controllers and inverters that are being produced today.

How well does the Zamp ZS-30A perform in real life? How well does it work? We have the controller wired to a pair of 12 volt, 120 watt polycrystalline solar panels and to a pair of Lifeline GPL-4CT 6 volt AGM batteries and it has performed exceptionally well. We’ve used it for over a year and it has reliably kept our batteries topped off in all kinds of conditions, including high humidity, freezing temperatures, and triple digit desert heat. In fact, the ZS-30A’s performance has exceeded our expectations by routinely harvesting 70 to 80 amp hours a day during the summer. Sure, you can spend a lot more money on a more efficient MPPT controller (a 10 percent increase in efficiency in the norm), but the question you have to ask yourself is if the extra cost is worth it for a solar system equipped with one or two 12 volt panels? Only you can really answer that, but in most cases, we believe the answer is, no. For most, a quality PWM controller like the Zamp ZS-30A is perfectly adequate.

So if you’re looking for a feature-packed PWM charge controller that will reliably maintain your batteries, and that is made in the USA, you should give the Zamp ZS-30A a serious look. The quality, durability, and reliability of the ZS-30A make it an excellent choice for your mobile and non-mobile, off-the-grid power needs. What would I rate the ZS-30A? Without hesitation, I’d give the Zamp ZS-30A a rating of five stars.

Note: This is an independent review. We do NOT get paid to review products on this website. We will only recommend products which we use and believe in and which we think will benefit our audience. The views expressed are our own personal views and are written without any influence, whatsoever. That said, we reserve the right to engage in paid affiliate marketing and promotion with brands, companies and individuals whose products we review.

The modifications to the Truck Camper Adventure Rig continue at a rapid pace, but this time with a twist. As you know, we normally do all of the work to our camper ourselves, but two [read more]

There’s no doubt about it, when it comes to the gasoline generator, recreational vehicle owners either love it or hate it. Yes, everyone loves the power that the traditional generator provides, yet nearly everyone loathes [read more]