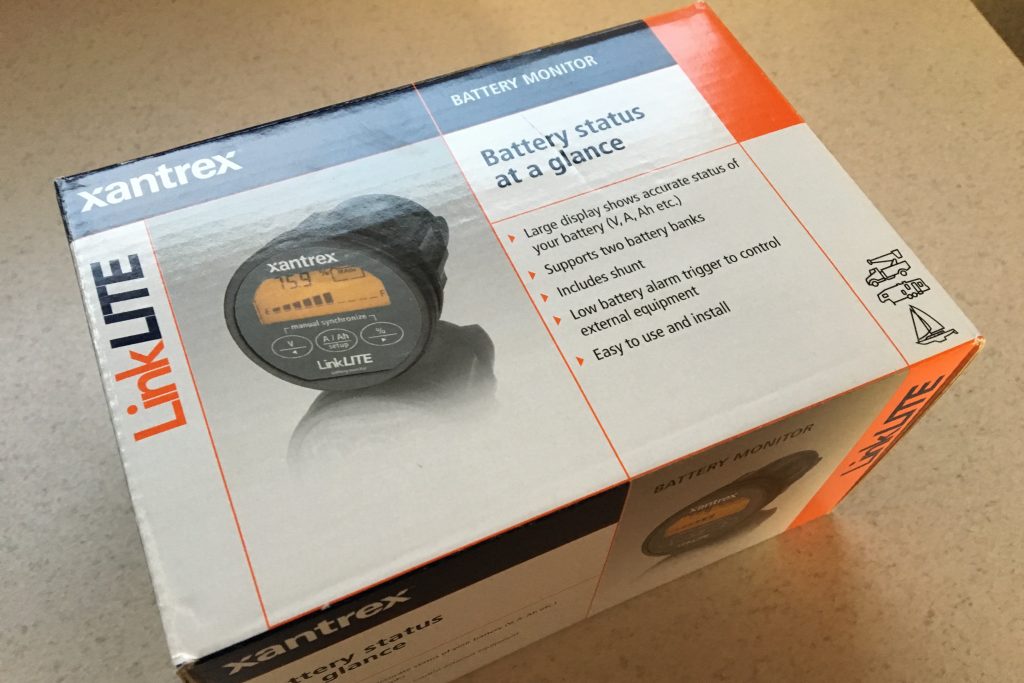 A product doesn’t need to be flashy or new to serve an important function in your truck camper rig. Such is the case with the Xantrex LinkLITE, a 12 volt battery monitor first introduced in 2008. The LinkLITE can display not only the current voltage state and remaining capacity of your batteries, but also how many amps you’re consuming. Having this information available at your fingertips is invaluable for anyone who likes to spend any amount of time off-the-grid. Moreover, the LinkLITE is equipped with an internal alarm relay that can automatically activate a generator and turn-off electronic devices like an inverter when your batteries fall below a certain programmable level. And for those who are wondering, yes, this feature-packed battery monitor works with all types of batteries including new lithium ion (LiFePo4) batteries.

The Xantrex LinkLITE includes almost everything you need to install the device. It comes with a LinkLITE monitor, a 500-amp shunt, a small Phillips screw driver to install the wiring in the back of the unit, and three connectors. Unfortunately, the 24 awg wire called for in the installation instructions will need to be purchased separately. You have two choices when it comes to getting the wiring: buy Xantrex’s outrageously priced LinkLITE Connection Kit

for $100, or buy your wire locally at a much cheaper rate. I chose the latter. I purchased all of the wiring I needed at a local auto parts store for about $25. Note: for my installation, I needed to run only five wires. If you’re planning on monitoring two battery banks and starting a generator during a low voltage situation, you’ll need to install eight wires instead. For the installation of the LinkLITE you’ll also need two 15 amp in-line fuses which are placed on the positive leads to your battery bank.

Before delving into the installation, it will be helpful to describe the purpose of the 500 amp shunt used in the installation. Simply put, the shunt is a low resistance resister. It’s probably the most critical component in the installation. When current flows through it, a low voltage is developed across it. The LinkLite meter is able to measure the voltages across the shunt and calculate current flow. The best battery monitors use a shunt to help make calculations and the LinkLITE is no different. More about the shunt and how it’s wired in a few.

The installation of the Xantrex LinkLITE is actually pretty simple and took about three hours to complete. The directions are well-written and easy to understand. For me, the most difficult part of the installation was determining where to install the monitor and where to run the wires. For most, determining both is fairly easy, but for some campers—like mine—this can be complicated due to the location of the batteries and the location where you want to mount the battery monitor. My batteries are mounted inside my camper and are on the opposite side where I wanted to mount my monitor. Getting the wires run to the opposite side of the camper proved problematic. Fortunately, my camper has a small step cover on the floor between the battery compartment and the fresh water tank housing. I was able to use this cover and the water tank housing to hide the wiring between the battery compartment and the mounting location of my LinkLITE.

The wiring connections between the battery bank and LinkLITE are pretty straightforward, but can get you tripped up if you’re not careful. The shunt is placed on the negative side of your battery system. The shunt has a battery side and a system side and it’s critically important to wire everything according to the directions. All of your loads including your charging devices must be placed on the system side of the shunt. Only one connection should be on the battery side and that will be between the battery side of the shunt and the battery. It’s important that you do this; otherwise, your readings won’t be accurate. In addition, it’s important to use a twisted pair of wires on the system and battery sides of the shunt for your measurements. I was able to twist these two wires together by using a drill on one end and having my wife hold the other end of the wires while the drill was operated. If you have some Ethernet twisted pair cable this will work well, too.

Mounting the LinkLITE monitor requires a little cutting and drilling. You’ll need a hole saw with a circumference of 2-1/8 or 2-1/16 inches to mount the monitor. Using a hole saw is much quicker and easier (it took maybe 10 seconds) than cutting the hole by hand using a small hand saw (your circle cut will be more exact, too). You’ll need a depth of 5 inches behind the mounting surface to mount the meter though more is better. Before cutting make sure there are no obstructions or hazards behind the mounting surface such as pipes or wires that can become damaged or cut by the saw. Mounting the battery monitor to your panel is extremely easy and is accomplished by using a large plastic nut that screws on the monitor from the backside. Basically, the backside of the monitor is threaded like a large screw.

Setting up of the LinkLITE for use is pretty simple. For those with wet cell and AGM batteries in your rig, the only settings that need to be programmed are F01, the total amp hours of the battery bank (220 amp hours in my case), and F02, the voltage level used during the float stage of your primary charging device (13.6 volts is used by my charge controller). If you have lithium ion batteries, you’ll also want to change F04, the state of charge (SOC) setting from 50 percent to 20 percent in order to reflect the greater usable capacity of lithium batteries. The LinkLITE must synchronize itself with your batteries in order to coordinate future charge cycles. This is done by the device automatically once the device comes online. Nothing needs to be done by the owner. During this process, the word “synchronize” will be displayed. This is accomplished after one charge cycle is completed on your batteries, meaning when your charging device switches to the float mode (this is why it’s important to accurately set this parameter during the initial setup procedure).

Operating the Xantrex LinkLITE is so simple a caveman could do it. The monitor’s display is easy to read and is backlit when one of the three operator buttons are pressed (a very handy feature when trying to read the monitor at night). The “V” button when pressed will display your battery bank’s current voltage, while the middle “A/Ah” button displays either the current amp draw or the total amp hours consumed during the current day. The “%” button on the right tells you the current state of your battery bank. Like I said, the LinkLITE is easy to use and easy to understand. The LinkLITE is capable of measuring currents up to 1,000 amps, which is much larger than anything found in today’s RV’s. Moreover, the LinkLITE can also display the voltage for a second battery bank which comes in handy for monitoring a starting battery or an auxiliary bank in your rig.

can be purchased for around $210.00 on Amazon.com. At this point, you might be asking yourself if the cost is worth it when a simple voltmeter can be purchased for a lot less money. Well, you can certainly go the cheaper route, but the Xantrex LinkLITE provides so much more information than just voltages. The LinkLITE also provides discharge current, amp hour consumption, and state of charge. It also has built-in alarms and can start and shut-off electronic devices. Having a battery monitor like the LinkLITE is especially useful for sizing your battery bank and solar power system and tracking down annoying parasitic loads that can drain your battery. The LinkLITE also helps those who operate high amp draw devices like a DC compressor refrigerator or a furnace during the winter to manage usage (on a side note, my LinkLITE was able to confirm that my Dometic DC compressor refrigerator was consuming 2.5 amps during the compressor run times).

In conclusion, the LinkLITE is a great device to have in your truck camper rig. It really does take the guess-work out of the state of your batteries and for geeks like me who like to stay informed, this information is invaluable. The peace of mind that the Xantrex LinkLITE battery monitor provides is worth the $200 cost. If you can find a new or used one for less, I would jump on it. In my opinion, the LinkLITE is a must-have item for anyone who’s serious about boondocking, getting far off the beaten path, and camping off-the-grid.

I recently installed a battery monitor and a solar power system in my 25C9.4SB Bigfoot truck camper. There are many reviews of battery monitors and solar charge controllers on the Internet. What makes this particular [read more]