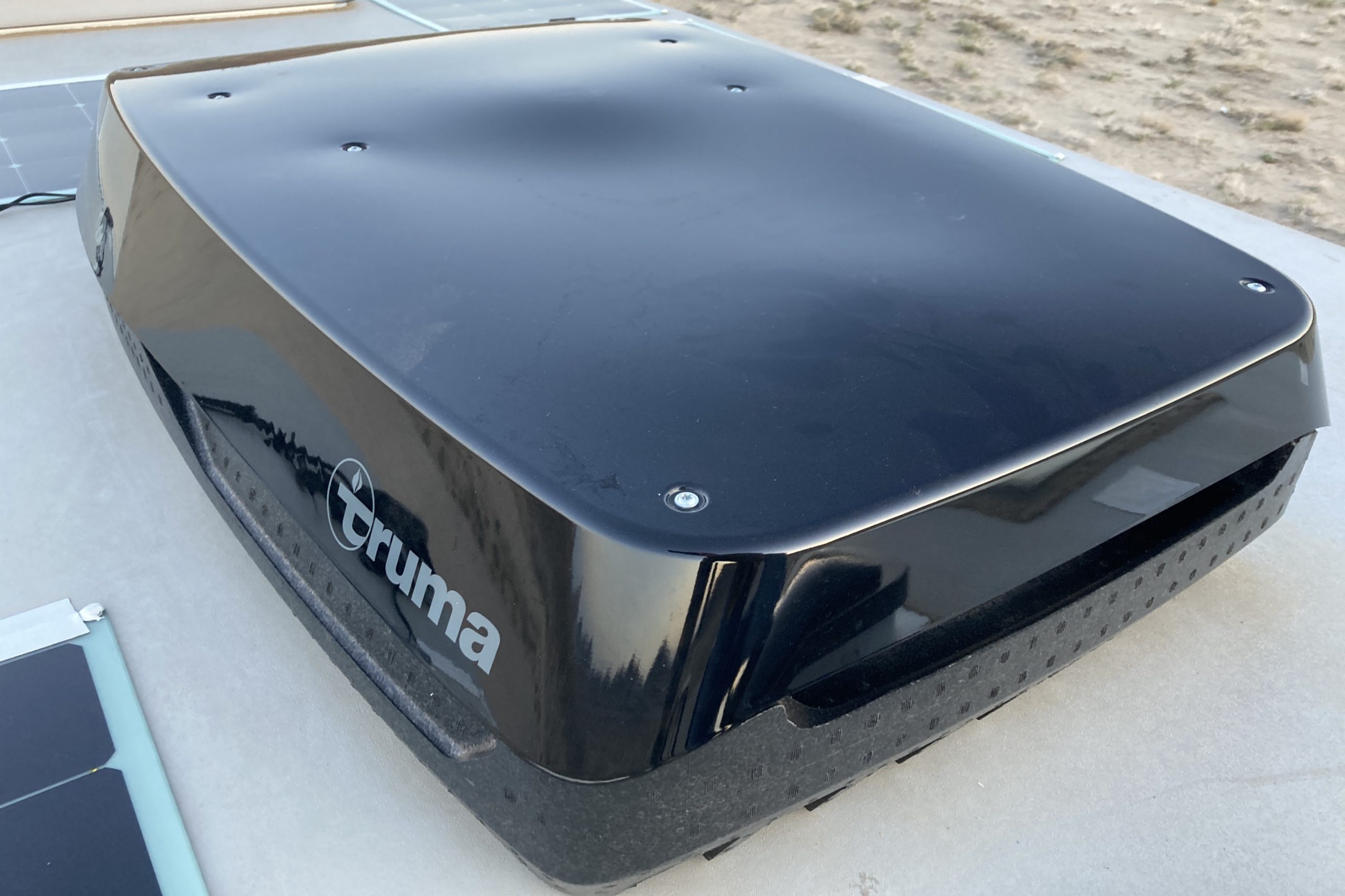 The Truma Aventa Eco 13.5 is made in Putzbrunn, Germany by the Truma Corp. The company was founded in 1949 by Philipp Kreis and is named after U.S. President Harry S. Truman. Kreis’ company started with a simple gas lamp, but today his company has grown into the leading caravan/RV component supplier in Europe. In 2013, Truma opened an office in Elkhart, Indiana in order to handle distribution and technical support here in the growing North American marketplace. Truma has been selling Aventa air conditioners in Europe and Australia for years, but the North American version of the Aventa was designed specifically for the warmer North American marketplace. As a matter of fact, Truck Camper Adventure was one of the few RVs on the continent fortunate enough to test the unit out in 2021.

The Truma Aventa Eco 13.5 is efficient and quiet. Unlike most rooftop air conditioners that offer only two speeds, this German import offers three efficient, low amp speeds: low 9.4 amps AC; medium 9.6 amps AC; and high 10.5 amps AC. Better yet, the Truma Aventa Eco is ultra-quiet. As a matter of fact, you can actually hold a conversation on the phone with one of these air conditioners running unlike most. How is the Aventa able to do accomplish this seemingly impossible feat? Though the use of several technological advances including thick, noise absorbing EPP foamcore and through the use of shock absorber compressor mounts, which reduce vibration and noise.

The Truma Aventa Eco is loaded with features. The air conditioner comes with several modes including a dehumidifier mode, a recirculation mode, and a night mode for slow speed fan operation, and a timer. It also features an easy-to-operate air distributor that allows the air flow to be directed downward and to the sides, and an easy-to-operate remote with a thermostat control to digitally set the temperature in the camper. A low-profile unit, the unit measures 26 x 44 inches and is only 10.4 inches high. Due to the large power surge generated at start-up, you’ll probably need a Honda EU2200i along with a Microair 364 soft starter to handle the surge. Still, the new Truma Aventa Eco 13.5 promises to be a big hit in the RV market due to its low noise, low amperage draw, and low profile. The Aventa weighs 95 pounds and lists for $2,049. 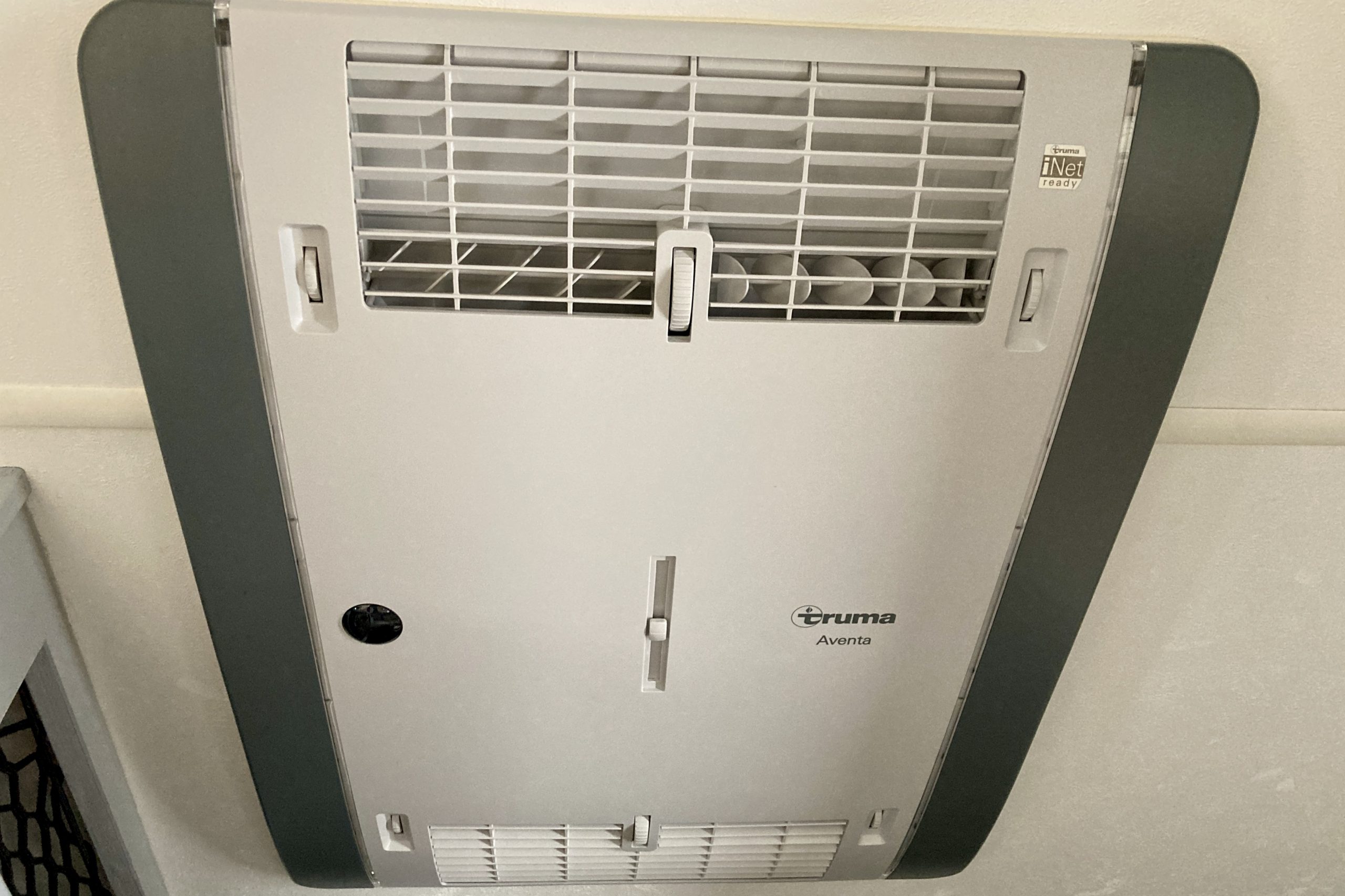 How Well it Works

For years the go-to model for many truck camper owners has been the Coleman Mach 8 Cub. What made and what continues to make this 9,200 BTU unit popular is its low amperage ratings (9.6 amps AC on low and 11.7 amps AC on high). This allows owners to operate Coleman Mach 8 using a standard Honda EU2200i or Yamaha 2500 generator. In spite of the company’s claims, however, the Coleman Mach 8 Cub is anything but quiet. It’s impossible to hold a conversation on the phone with the air conditioner running, the true mark of a “quiet” A/C. The unit’s bidirectional air distributor is also a bit stiff and difficult to operate with no real ability to point the distributor downward. It spite of its noise level, however, the price for the Coleman Mach 8 is only $1,000, half the price of the imported Aventa.

Compared to the Coleman Mach 8, the amperage ratings of the Truma Aventa compare favorably. On low, the consumption is only 9.4 amps AC with slight increases on medium and high. We rarely use the medium and high speeds, though, because you really don’t need them in a “small” truck camper. With the compressor in operation, we typically see a consumption of around 50 amps DC during daylight hours, which includes about 30 amps harvested by our solar power system. How often the compressor operates is the most important thing when calculating power consumption. Depending on the ambient temperature and the temperature inside the camper, the compressor usually operates no more than 30 minutes per hour, which cuts the consumption rate in half. In our camper, we have no issues operating the unit using a Xantrex Freedom X 3,000 watt pure sine wave inverter.

For us, the noise level is just as important and in this all-important category the Truma Aventa blows the competition away. There simply isn’t a quieter air conditioner in the RV marketplace than the Truma Aventa and we’ve owned and been around a lot. What are the decibel levels of the Truma Aventa? We don’t know because it’s not in the literature and because we haven’t measured it, but you can take our word for it that it’s very quiet. This brings up a good point. The noise level is a very important metric when comparing air conditioner makes and models. We wish manufacturers provided decibel information in specification literature, but we suspect it isn’t because the noise levels are typically very high.

Are there any negatives associated with the Truma Aventa? Just one—the remote. Yes, having a remote is nice, especially when lying in bed, but if you happen to misplace it, you’ll be unable to operate the air conditioner because there are no manual controls on the unit itself. Not a major issue, but it can be frustrating if you happen to misplace it—or even worse, lose it. A word to the wise. We strongly recommend having a dedicated location or mount where the remote can quickly be located when needed.

We’ve owned several air conditioners over the years, including the popular Coleman Mach 8 Cub, and the Truma Aventa is, without a doubt, the very best RV air conditioner we’ve ever owned. When Truma approached us about testing the Aventa out we reluctant to say yes since we already had our heart set on getting a DC air conditioner, but we’re glad that we did. It’s a terrific air conditioner. Yes, the Aventa is heavier at 95 pounds, compared to the 87 pounds of the Coleman Mach 8, but the difference is fairly small. Yet, the Aventa scores higher in efficiency, in quietness, and by offering additional modes of operation. The low amperage draw on the low setting also means you can operate it using a Honda EU2200i or on a standard 15 amp household AC outlet. Sure, the price is double what the Coleman Mach 8 Cub costs, but like we always say, you get what you pay for. There simply isn’t a better RV air conditioner in the market. What would we rate the Truma Aventa Eco Air Conditioner? With a rating between 1 to 5 stars with 1 being the lowest and 5 being the highest, we enthusiastically give this product 5 stars. It’s a winner. 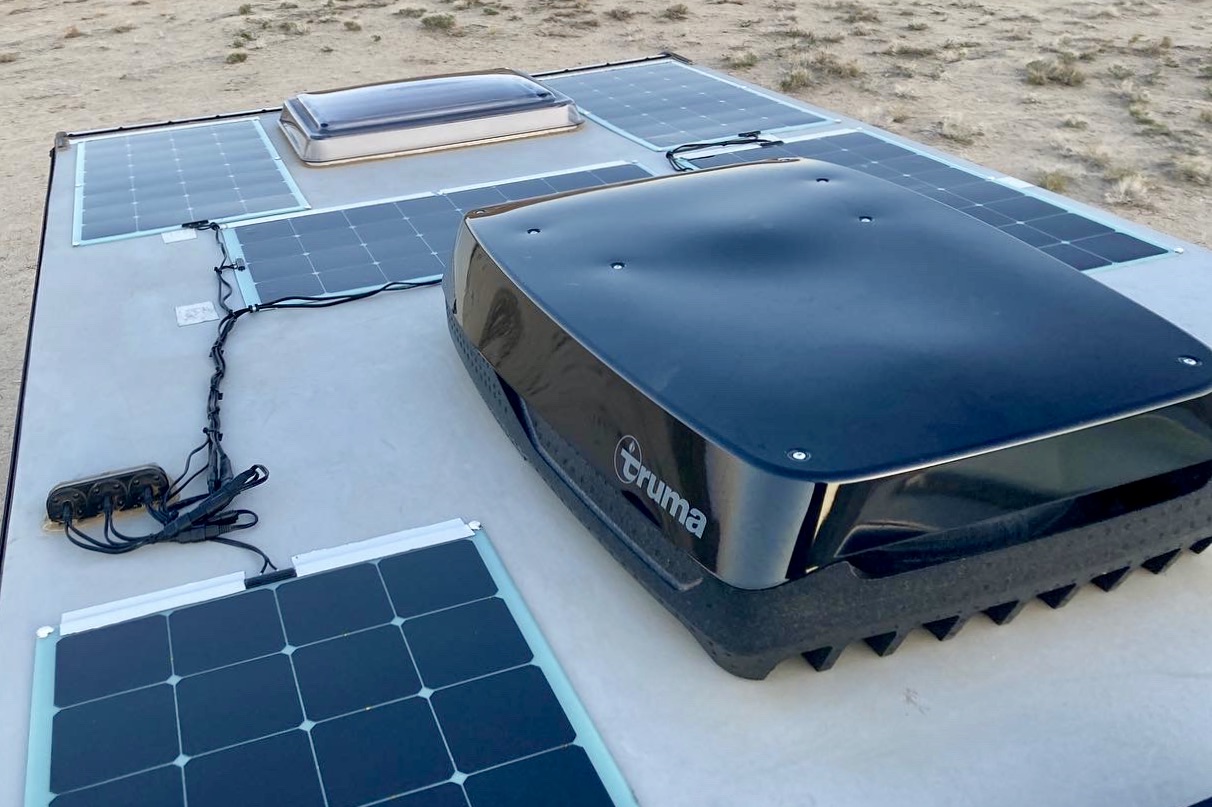 Our Wolf Creek didn’t come with an air conditioner when we bought it, yet that was fine with us. We wanted to choose our own unit. What we were looking for was simple. We wanted [read more]