The Palomino SS-1200 is a pop-up camper that is one of the most affordable campers you can buy new. My partner and I bought a new one in November 2020 and have been traveling out of it since then for seven months. We’ve spent a lot of our time boondocking off-pavement west of the Rockies and have put the camper through its paces. We’ve driven over 14,000 miles primarily in Utah, Arizona, Colorado, Baja, California, Oregon, and Washington. This is a review of the Palomino SS-1200 pop-up truck camper.

Since this was our first time living out of a vehicle for a long stretch and our first truck camper, we wanted to start with an affordable and simple option that was ready for the road right off the lot and the SS-1200 has proven worthy in that regard so far. We opted for this smaller camper with no toilet, black tank, or gray tank in the pursuit of simplicity and that has worked well for us.

The Palomino SS-1200 has a dry weight of 1,491 pounds and fits our short bed F-250 quite well. We’re using Torklift’s FastGuns and we added Airlift’s LoadLifter 5000 air springs, but probably didn’t need to since our F-250 has the extra leaf spring that is part of Ford’s factory camper package and we’ve never noticed any rear sagging.

While we don’t have a wealth of experience driving other truck campers, this one has handled very well on and off pavement. On the F-250 we’re at 9 feet with the top down and have been able to get into lots of tight spots both in parking lots and down rough roads with overhanging branches or canyon walls. In many cases we have found ourselves deep into hard to reach spots in public lands where we only see tent campers or other lighter setups like pop up roof tents or camper shells.

The SS-1200 has a basic outdoor shower that has worked very well for us. The only time we ever use the tankless propane heater is for short showers outside. 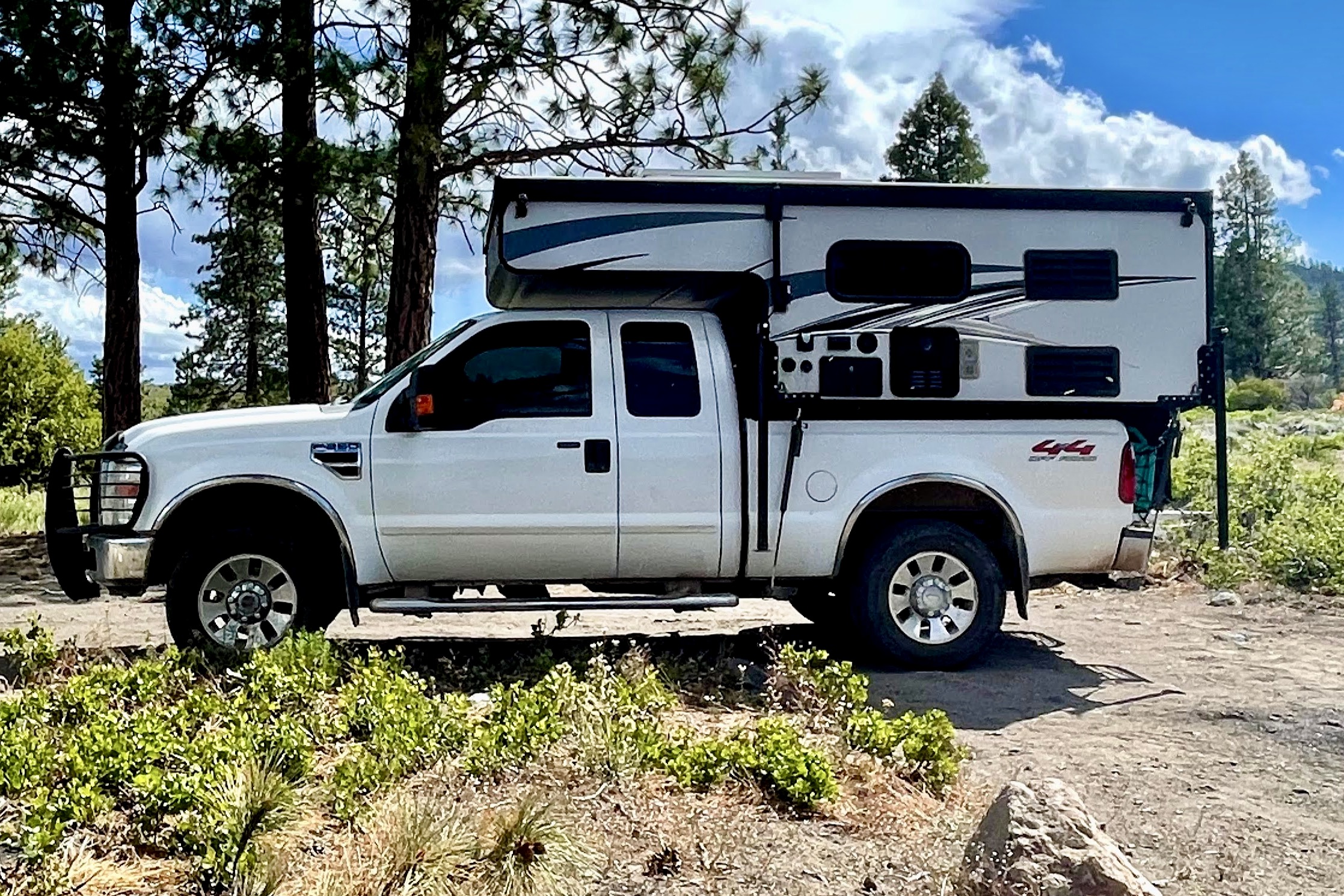 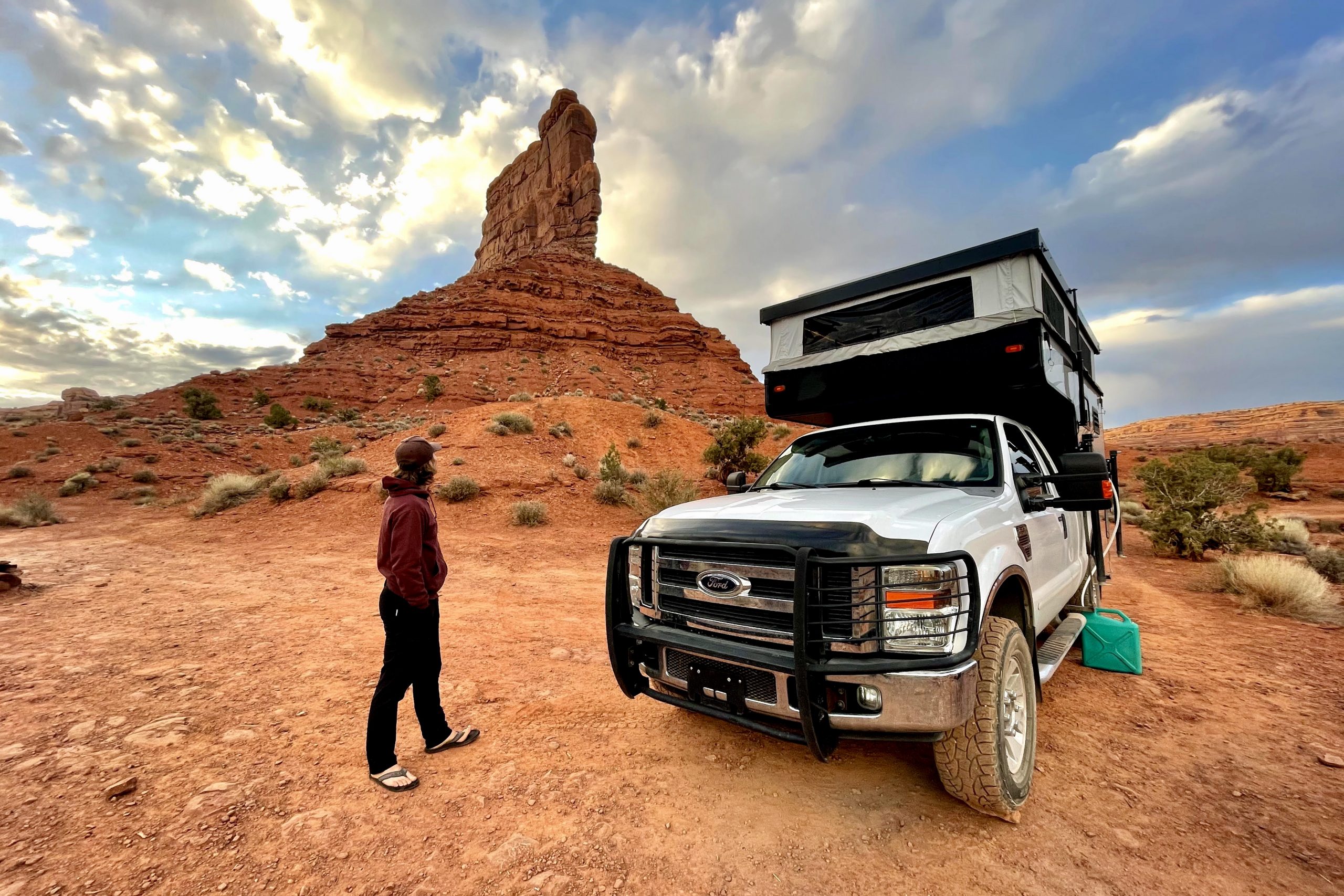 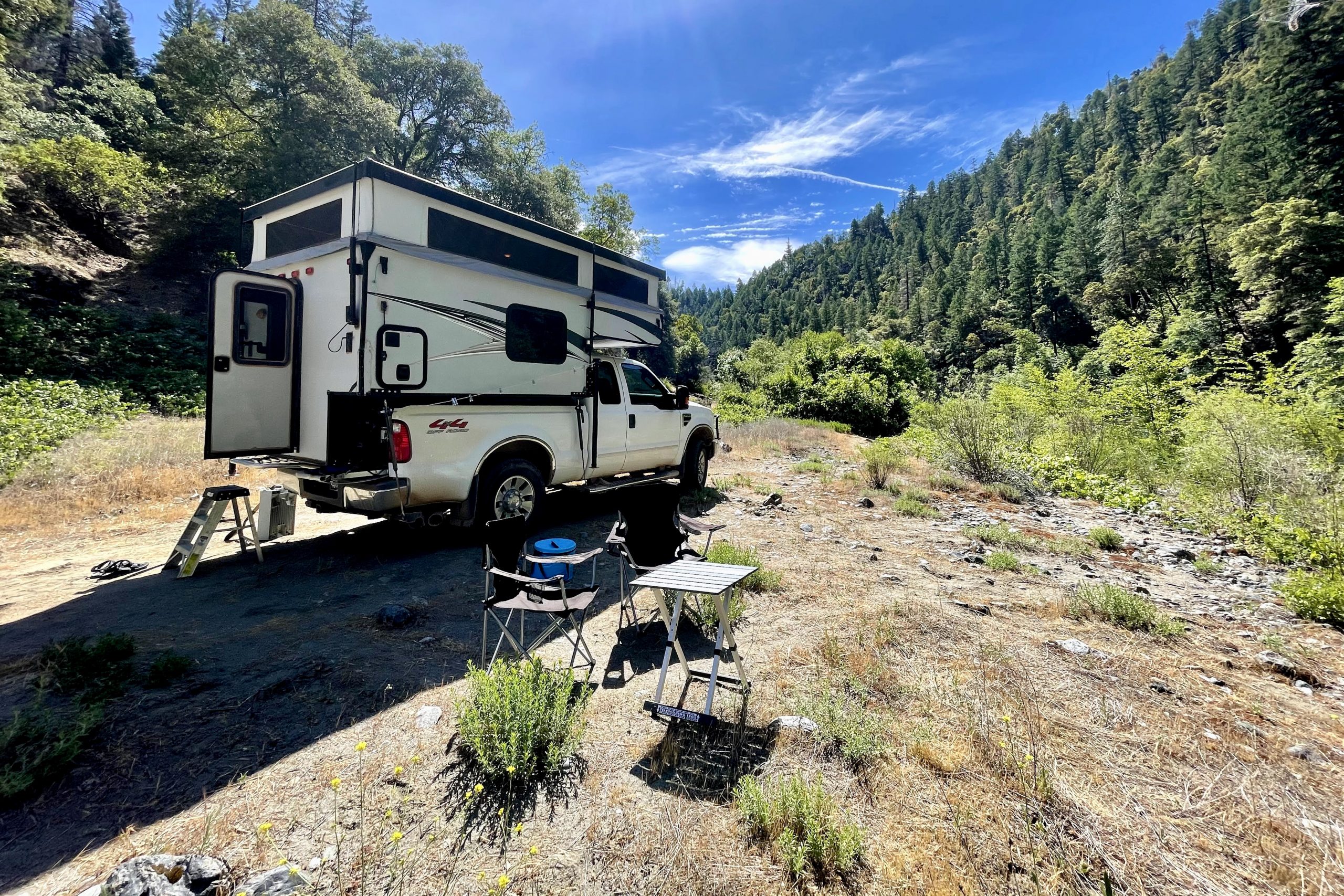 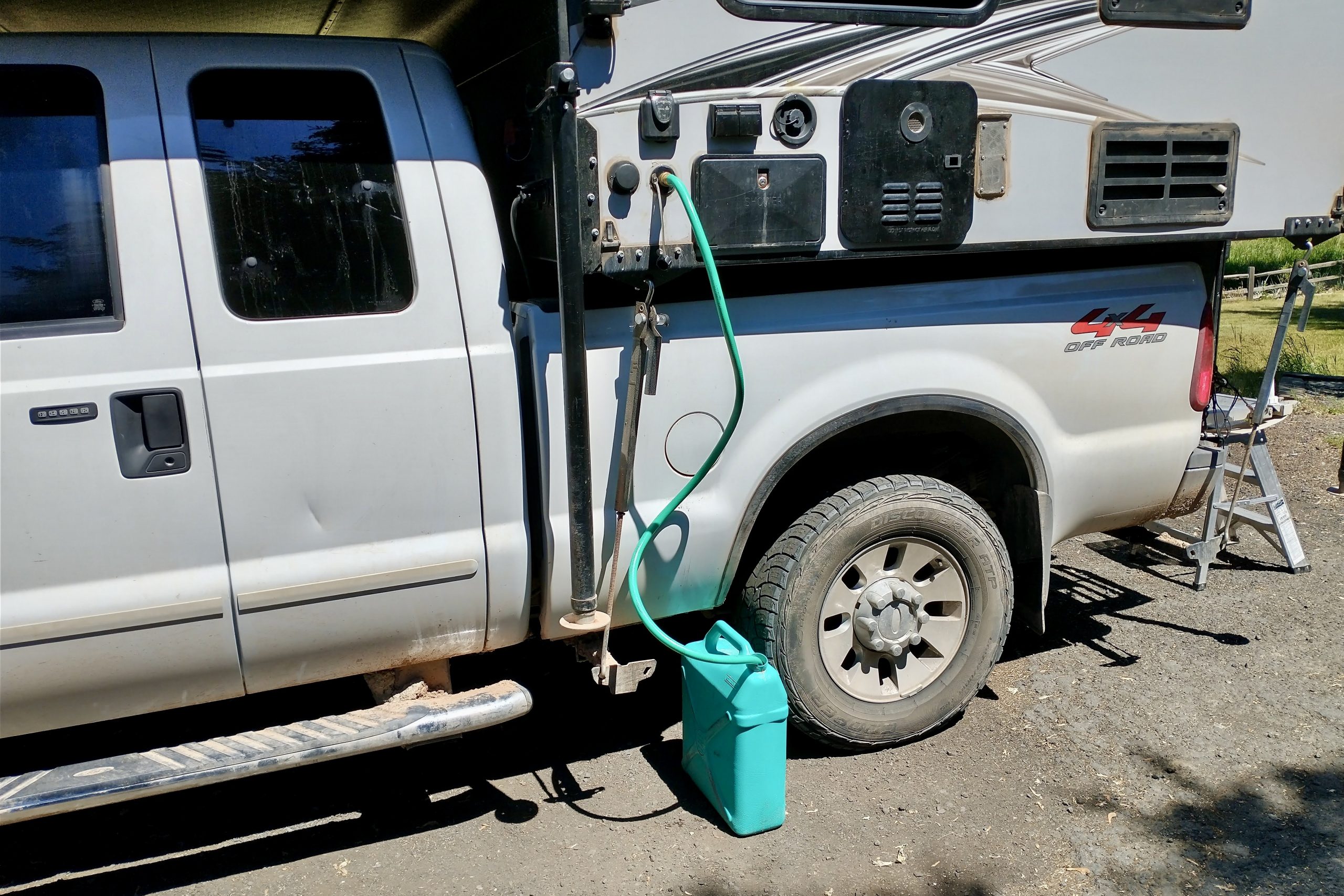 With the camper loaded on our truck we have about 7-inches to spare on each side of the bed so we’ve attached reinforced bungee nets and loaded up the truck sidewall with camping and paddling gear and four jerry cans for spare water and fuel.

There is no built-in gray tank for the sink, so we attach a short hose that runs into a 6-gallon Jerry can that we keep stored in the truck sidewall while driving. This is a quick and easy setup and seems much easier to clean than an internal gray tank.


For the price point (we’ve seen this model new listed at about $12,000) the Palomino SS-1200 is jam packed with features including:

The interior cabinet finish is a dark and dated walnut and stands in stark contrast with most camper companies which are going with a lighter, more modern look. Most of the camper layout is relatively thoughtful and we’ve found it to be plenty comfy for two people. We’ve occasionally had three or four people in the camper for meals, which is only workable if everyone but the chef is sitting down in the seating area.

The queen size memory foam bed is surprisingly comfortable and there is plenty of room to sit up when the roof is raised. One of the best parts of the soft top is the panoramic view from the bed. Almost all of the soft top wall is window and the camper feels very light and airy compared to hard sided campers. 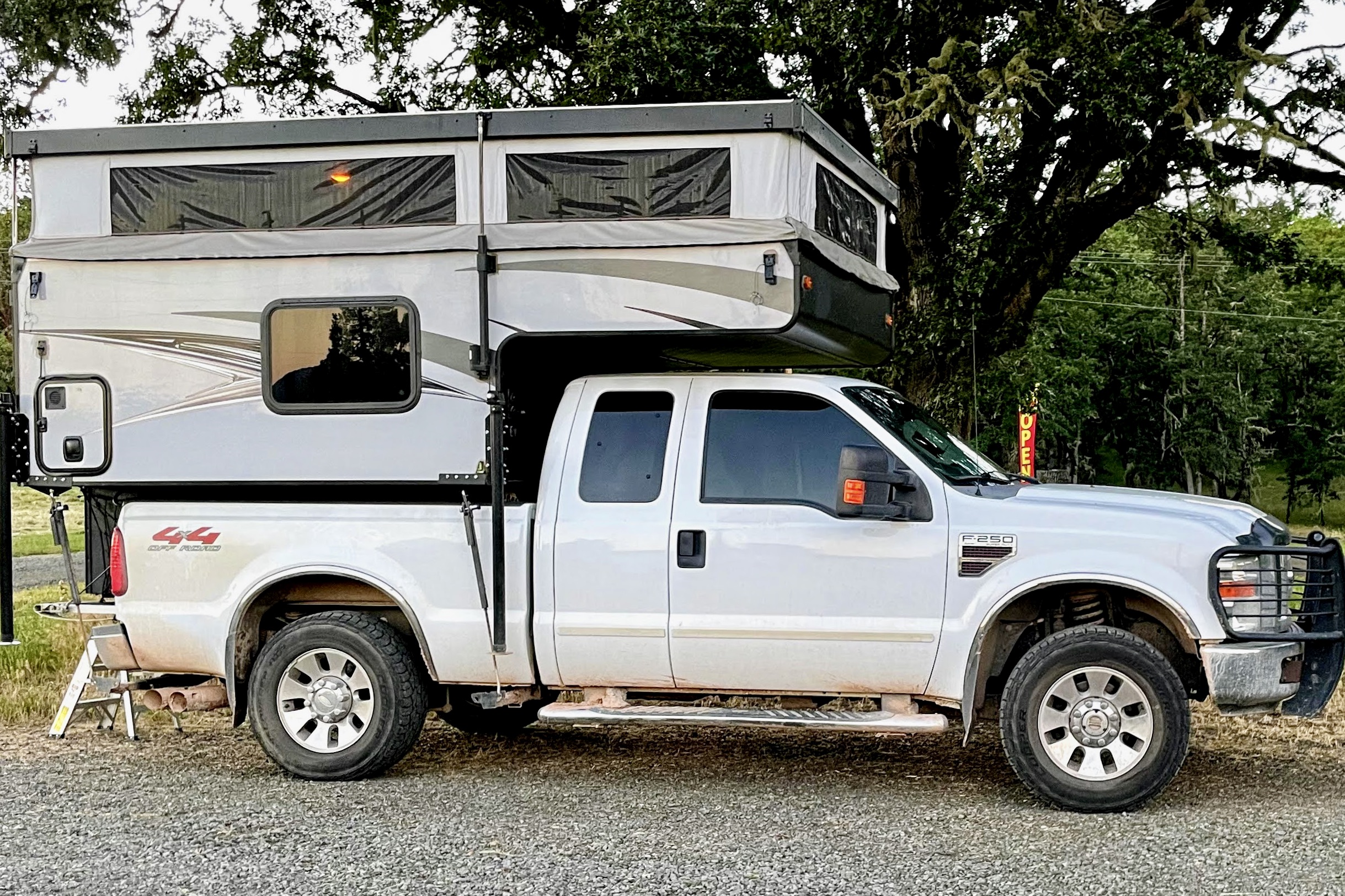 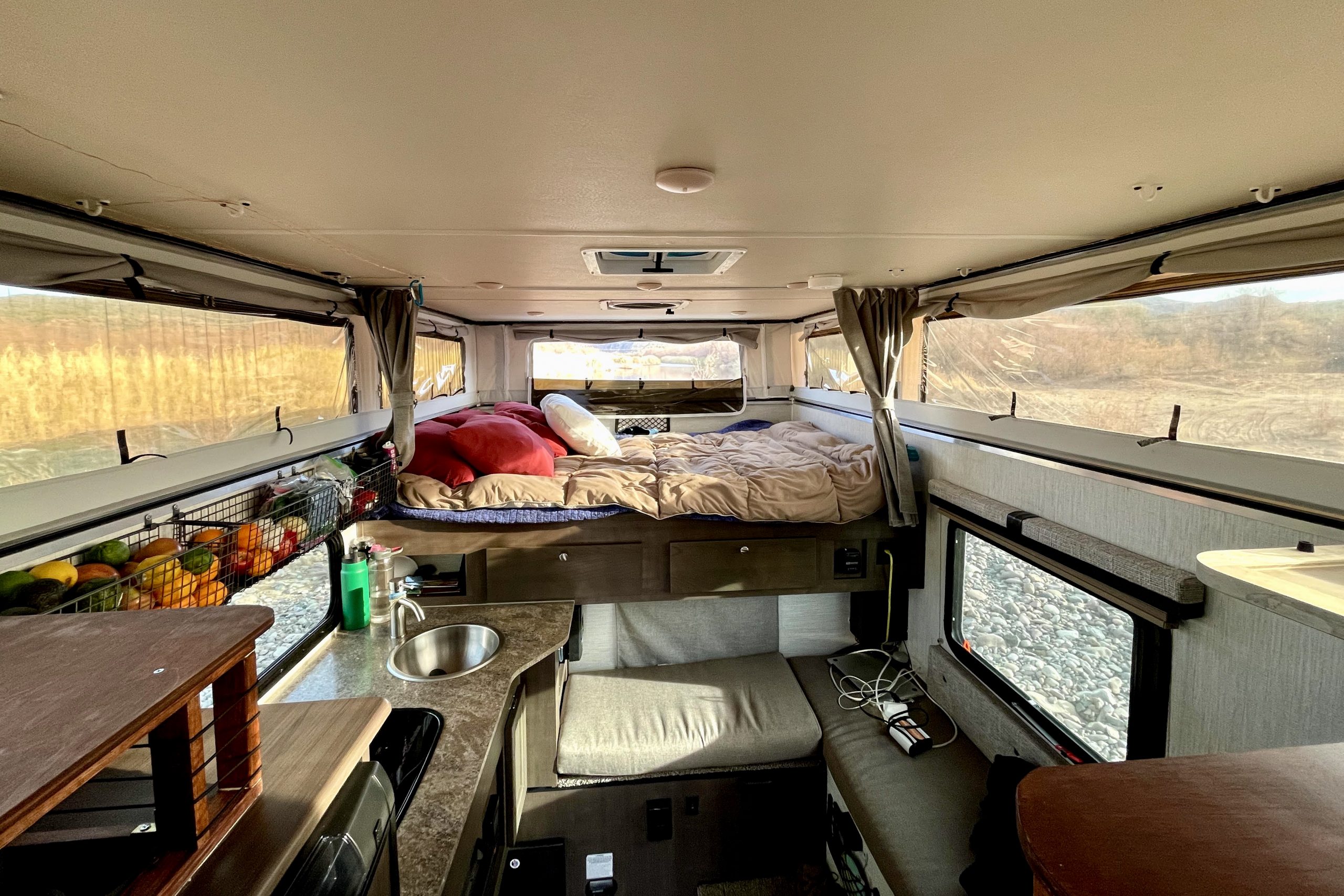 The factory pre-wires the SS-1200 for solar and this worked like a charm when we added a Renogy 200 Watt kit. We easily mounted the two solar panels to the roof and then just attached the wiring that was already snaked through the roof back to the battery area.

The battery compartment under the center bench is about 17 x 17 x 17 inches. We ended up swapping the factory 15-gallon water tank for a 25-gallon water tank, which cut into this space, but we still have plenty of room for a group-31 size battery.

The camper comes with three soft storage boxes that hang from the ceiling, but we found these to be annoying for a number of reasons. They made the space feel a bit more cramped and blocked a lot of the light and views through the soft top. We removed the storage boxes and ended up expanding the available storage through a number of changes and additions.

The table and seating area works well for two people and we occasionally use the table to set up a daybed in the seating area.


With the top up and the soft storage boxes removed the inside of the camper feels impressively roomy for the small footprint. The soft top is mostly transparent plastic (or a screen with the windows rolled down) so there’s an abundance of natural light, cross breeze, and views. If you’re in the bed area or standing down below you can see in every direction which is great when boondocking in wide open spaces.

For such a small space we’ve found the kitchen to be very workable. We travel with three different pans and a lot of our storage is devoted to food and kitchen supplies. We often set up the table during meal prep for extra counter space and are able to assemble relatively complex meals for camping conditions. 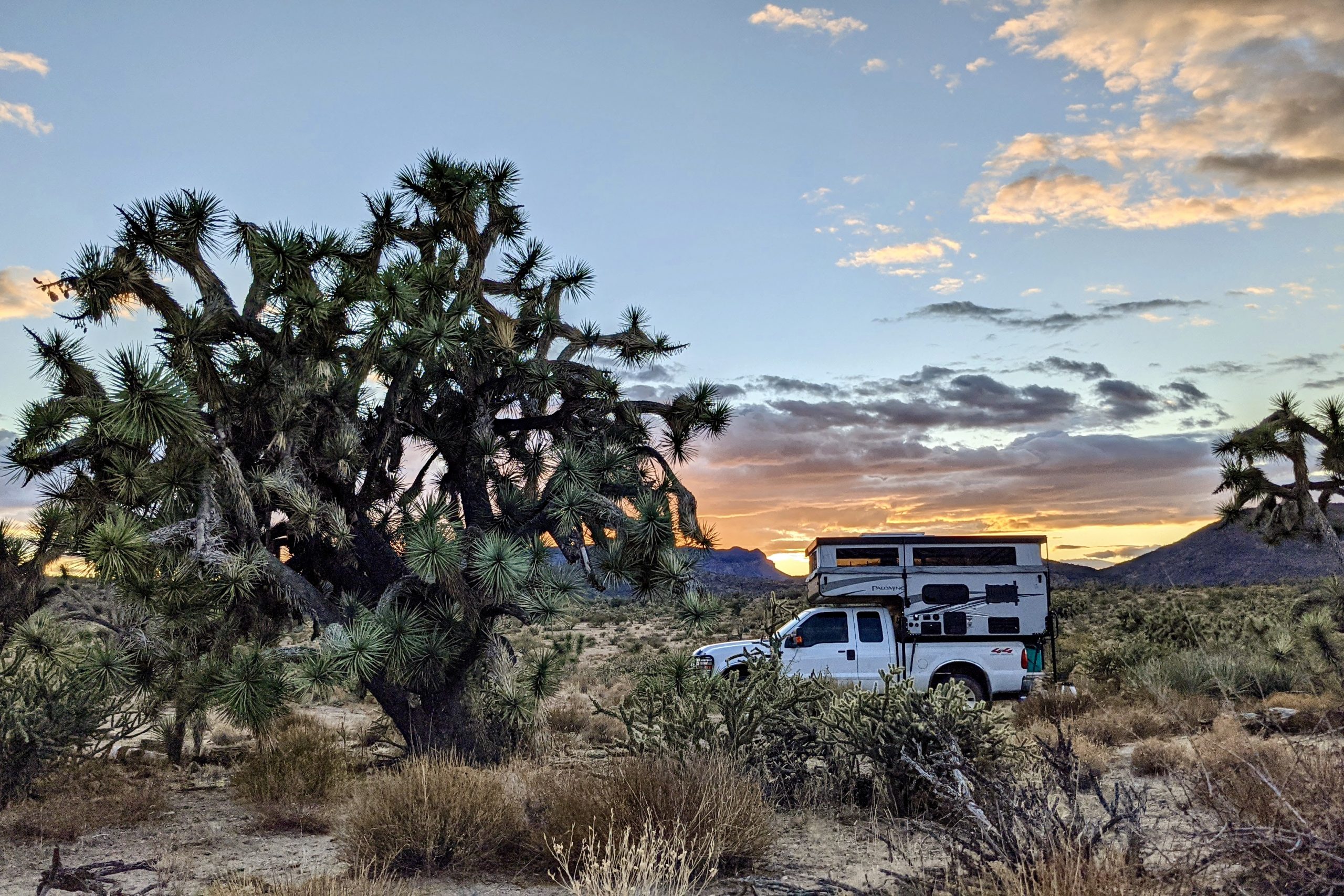 It’s also hard to overstate how comfortable the bed is. When we do stay indoors we almost always find other beds to be disappointing compared to the firm memory foam mattress with plenty of space for two people.

We’ve also been really impressed with the propane furnace. It heats up the small space very quickly, doesn’t seem to use much propane, and the thermostat helps keep an even temperature when we do run it.

While we’ve been pleased overall with the SS-1200 there are a few shortcomings, mostly around the build quality, which one should probably expect for such a reasonably priced camper.

The most frustrating part of the camper was the quality of interior carpentry used for the construction of the cabinets, drawers, and storage spaces. After taking things apart we often found ourselves baffled at the choices the factory team had made. I already mentioned the hanging storage boxes, but really most of the included storage was somewhat disappointing in its level of attention to detail. For example:

In such a small space these issues seemed like a huge waste for two people living out of the camper full time, so we have rebuilt or reconfigured much of the storage space to roughly double the capacity. Much of this work was fun for us, so it wasn’t all bad, and the camper storage fits our needs much better now.

Another disappointment was the insulation quality. As a pop-up camper we expected this to be a three season camper that would not shine in cold temperatures, but the lack of care spent on basic air sealing does not reflect well on Palomino. We found at least a dozen places throughout the camper where there were large drafts from areas that hadn’t been sealed properly. Again, this was a problem that was easy enough for us to solve by taking a few things apart and adding insulation or caulking seams.

The lighting was also an area that seemed like an afterthought. The camper comes with seven push puck lights which are very convenient, but the lights are extremely bright and blue. We found the lights to be quite unpleasant and, therefore, installed a dimmer switch for the whole circuit, replaced one puck light with string lights, and added an orange photography gel to the puck lights for a much more pleasant ambience.

The Palomino SS-1200 is a very capable and fully featured pop up camper that costs just a fraction of many of the other campers frequently featured on Truck Camper Adventure. We have lived out of it full time for seven months and it has performed admirably on most of the dimensions we care about. The biggest downside for this entry-level camper is the interior build quality and many of those issues can be addressed if you’re up for a little bit of light carpentry. 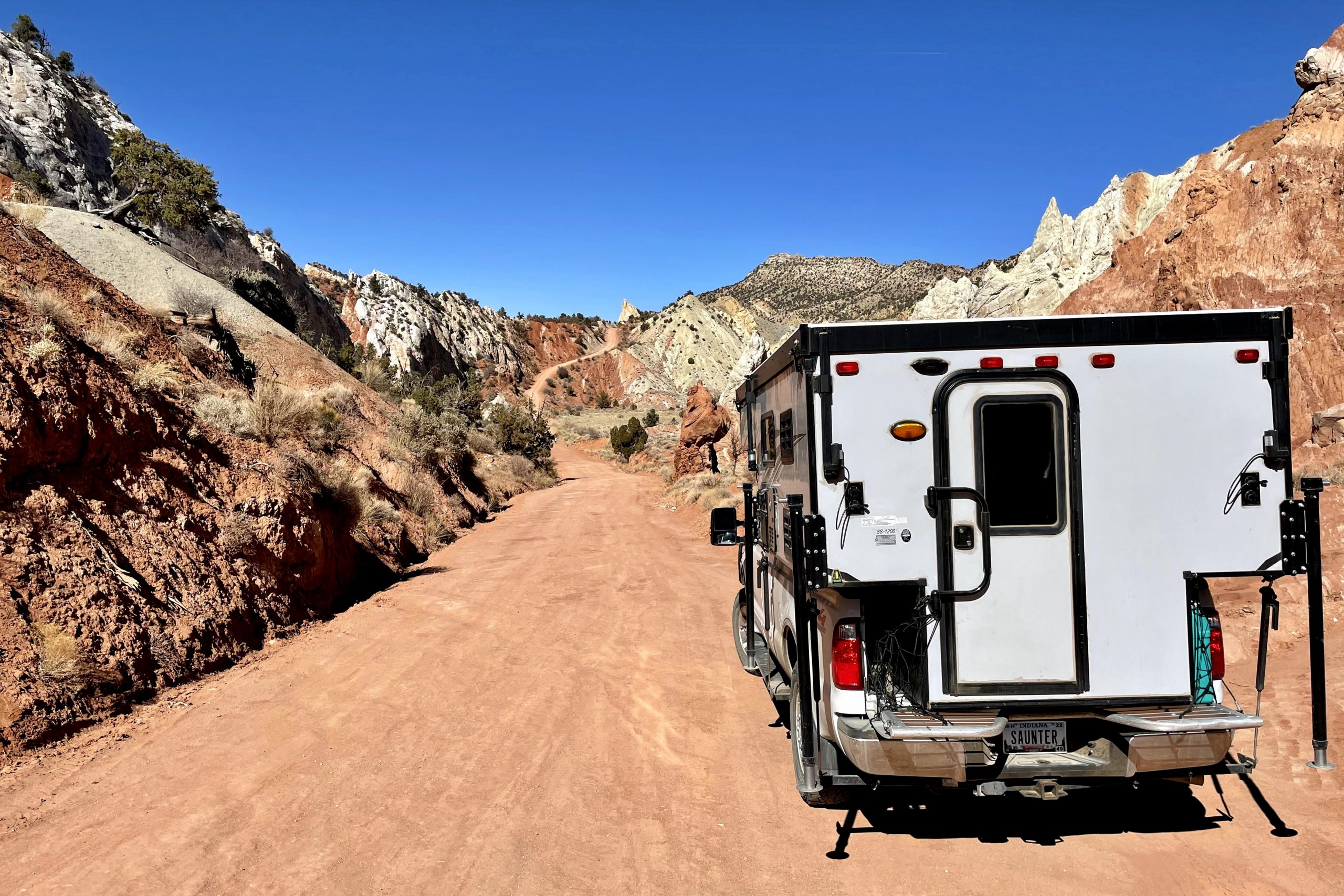 Poll Results: How do you define Boondocking?

The results are in. This poll asked if true boondocking involved overnighting at a Walmart, casino, or campground. A total of 156 readers took the time to weigh in on this sometimes contentious topic. A [read more]

Last week I had a chance to field test my new Windwalker 250 RV Wind Turbine while boondocked near Zion National Park in Southern Utah. The wind turbine is made by Free Spirit Energy, an [read more]