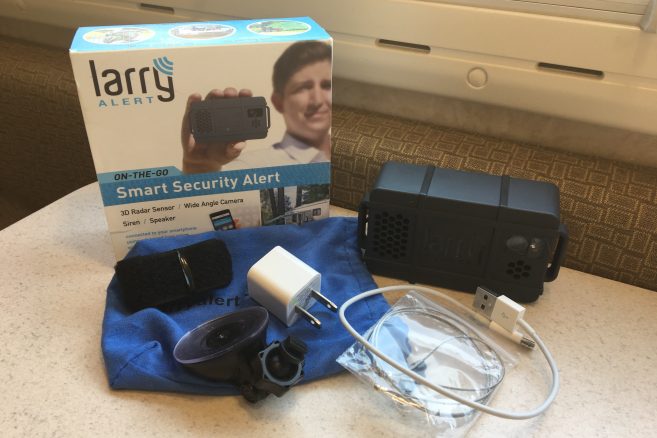 The unexpected encounter early in the night left us rattled. It was around 9:30pm. We were boondocking in the Prescott National Forest a few miles outside of Mayer, a small town located in north central Arizona. We had just retired for the night and were comfortably tucked away in bed. The wife was watching videos on her iPhone and I hadn’t been asleep more than 30 minutes, when suddenly, my wife woke me up saying that someone had just drove up to our campsite.

Unfortunately, the front of the camper was facing the vehicle that had just pulled up, so we couldn’t see a thing except for the headlights that illuminated the inside of our camper. With my heart now racing and my brain still half asleep, I quickly put on my glasses and hopped out of bed. While getting dressed I saw a man walk by one of our windows. Alarmed by the blatant intrusion, I went outside and approached the stranger, who at that time was already walking toward his running truck, and asked him, “hey, what’s going on?” “Nothing,” he said, “just seeing what’s going on,” as he hopped back inside his truck. Within a few seconds the stranger was on his way, leaving us to wonder what had just happened.

In our 15 years of boondocking this was the first time anything like this had ever happened to us. Was this man a Good Samaritan checking on us to see if we were OK or was he a thief looking for easy pickings? We’ll never know for sure, but we suspected the latter. I laid in bed for another hour thinking about the encounter and what we could’ve done to be better prepared. We had personal protection, so we were good there. But it would’ve been nice if our camper had some kind of security system, a portable security device that had bright lights and a siren to alert us of an intruder. Something like that would’ve scared him away for sure. The Larry Alert would’ve been perfect.

What is the Larry Alert? The Larry Alert is a lightweight, wireless security system small enough to be carried in your pocket. At first glance, the Larry Alert looks like an ordinary digital camera, but it’s much more than that. It’s also equipped with a radar to detect intruders, a siren, a loudspeaker, and a bright light that illuminates when the alarm goes off. The unit works by taking 2 megapixel pictures of anyone or anything that comes within range of the unit. It can work either paired with your smartphone wirelessly when you’re “home” or by itself when you’re away from your campsite. Constructed of a rugged, weather-resistant housing, the Larry Alert can be mounted to practically any surface using either the enclosed suction cup mount or the enclosed Velcro strap. 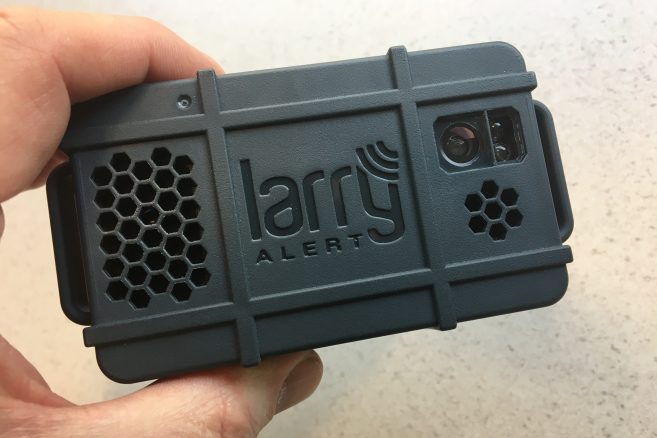 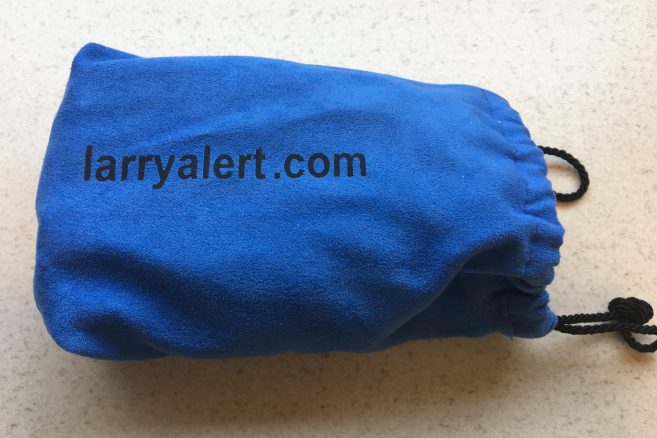 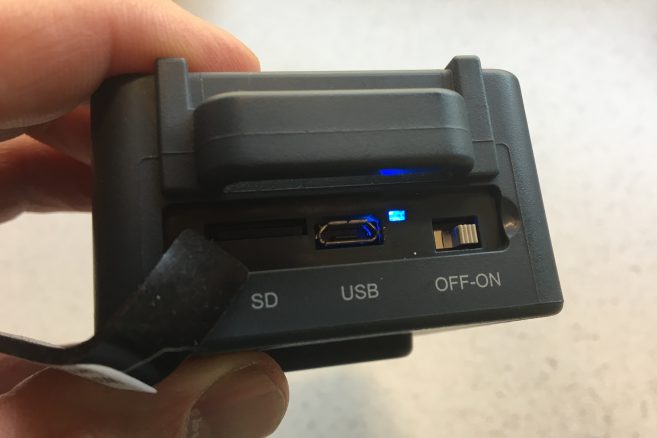 How does the Larry Alert work? It’s actually pretty simple. Once the device is armed and activated from your smartphone, it radiates an invisible shield around what ever you want to protect. When the shield is broken, the alarm-mode activates, the siren goes off, and 15 sequential photos are taken in rapid succession. During nighttime operation a bright light is also activated for picture-taking. If you’re in range of the device with your cell phone, you can view these photos immediately. Depending on whether the person is friend or foe, you can then issue either a friendly greeting or a stern warning using the unit’s loudspeaker. 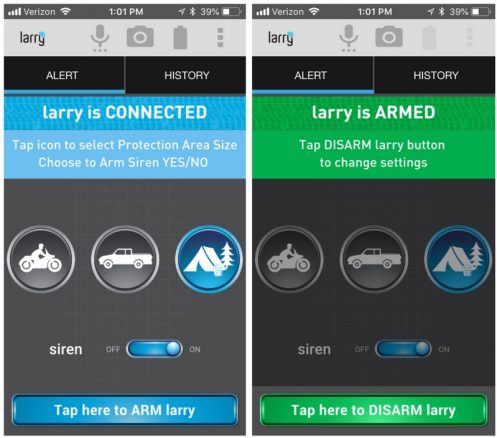 The Larry Alert comes with several features worth mentioning. Not only can it be used in the aforementioned auto mode to watch over your belongings, but it can also be used to take photos remotely (either a single photo or 15 photos can be taken) any time you want. You can also use the Larry Alert as a friendly photo door bell with the siren turned off. A record of all alarms and photos is stored on the device’s SD card with a date/time stamp recorded for each. As mentioned before, the Larry Alert operates whether you’re in range of the unit or not. When the device loses connection with your smartphone, it automatically saves all alerts and photos until you’re back in range when they can be downloaded to your smartphone.

So how well does the Larry Alert work in real life? Overall, it’s extremely easy to operate, so even those who are technically challenged can use it right out of the box. We used our Larry Alert over a period of six months and were generally pleased with its performance. Each time we tested it, the alarm went off and photos were generated. We have three complaints about the unit though. The biggest complaint we have is with the quality of the photos—the 2 megapixel photos are pretty mediocre, higher resolution photos would be better. The intruder has to be fairly close to the camera in order for the person to be recognized, even closer during the night. You certainly won’t win any photo contests with this camera.

The other complaint we have is how the unit operates with your smartphone. When your smartphone is connected to the Larry Alert is does so via wireless. This means you’ll have no cell service. That’s a pretty big limitation in my book. This limitation wasn’t that big of a deal for us because we were able to use my wife’s phone when my phone was connected, but if you’re traveling solo with a single smartphone this could be a showstopper. Truth be told, if you’ve retired for the night, are away from your campsite, or are out of cell phone range this limitation won’t really matter. It only comes into play when you’re actively monitoring and controlling the unit.

The last complaint we have is with the security of the device. What good is a security camera if it can be stolen? Those who are skittish will certainly bail when the siren goes off, but those who have a more stout constitution might just cut the Larry Alert’s security cable and steal it along with everything else. Because of this, placement of the Larry Alert is key. It needs to be mounted in a location where it’s close enough to get good pictures, yet needs to be mounted in such a way that it’s hard to steal. It’s a fine balancing act. Depending on location, being able to do this might not always be possible. As a result, some RV owners like to place their Larry Alert inside their rig by a window. 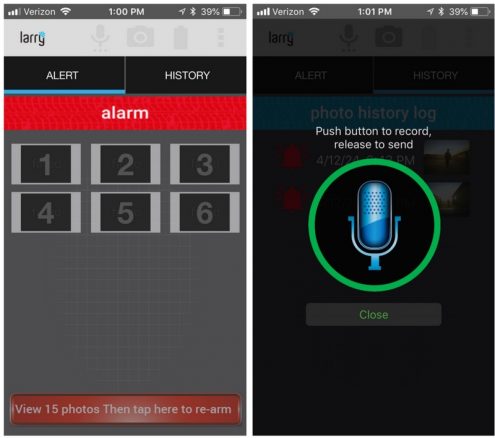 So at this point you might be wondering how the Larry Alert could’ve helped us with that intruder we encountered last November. We think the Larry Alert could’ve helped us in several ways. First, we’re pretty sure that the bright light and siren would’ve scared him away. Second, we’re pretty confident we could’ve gotten some photos of the guy. I never did get a good look at him. Third, we could’ve confronted him using the Larry Alert’s loudspeaker rather than doing it directly outside of the camper. For those unable or unwilling to set foot outside, being able to use the loudspeaker alone will prove invaluable. A big benefit of the Larry Alert is to scare off unwanted company not to get into a confrontation with an intruder. So why didn’t we use our Larry Alert that night? The truth is we had the Larry Alert with us, but didn’t have it deployed that night because we were recharging the battery. That brings up an important point. For those looking for more than just eight hours of protection a day, having another battery or two will be needed.

So what would we rate the Larry Alert? Using the 5 star rating system, with 1 being the lowest and 5 being the highest, we give the Larry Alert a rating of 3.5 stars. We had to lower the Larry Alert’s rating due to the mediocre photo quality, theft concerns of the unit, and the way it hogs your smartphone when it’s connected, but aside from those limitations, the Larry Alert does what it’s advertised to do. If you keep valuables outside—like a generator, a bike, or a portable solar array—you can be sure that the Larry Alert will keep a watchful eye on your property while you’re away. Sure, a Pit Bull or German Shepard would be a better deterrent, but not everyone owns a large watchdog. The Larry Alert is a good alternative. The Larry Alert might not be able to stop a theft from happening, but it can at least ID those who did it.

Take Up The Fight with the NMOHVA

As most of you know, I don’t advertise or promote many causes on this website. However, a few causes are worthy of discussion and promotion and one of these is the fight against the US [read more]

“Sold To Another Happy Camper”

Buying a truck camper wasn’t that big of a decision for me. Even though I really enjoy Airstream travel trailers, I longed for the mobility and versatility of the truck camper. I love to boondock [read more]