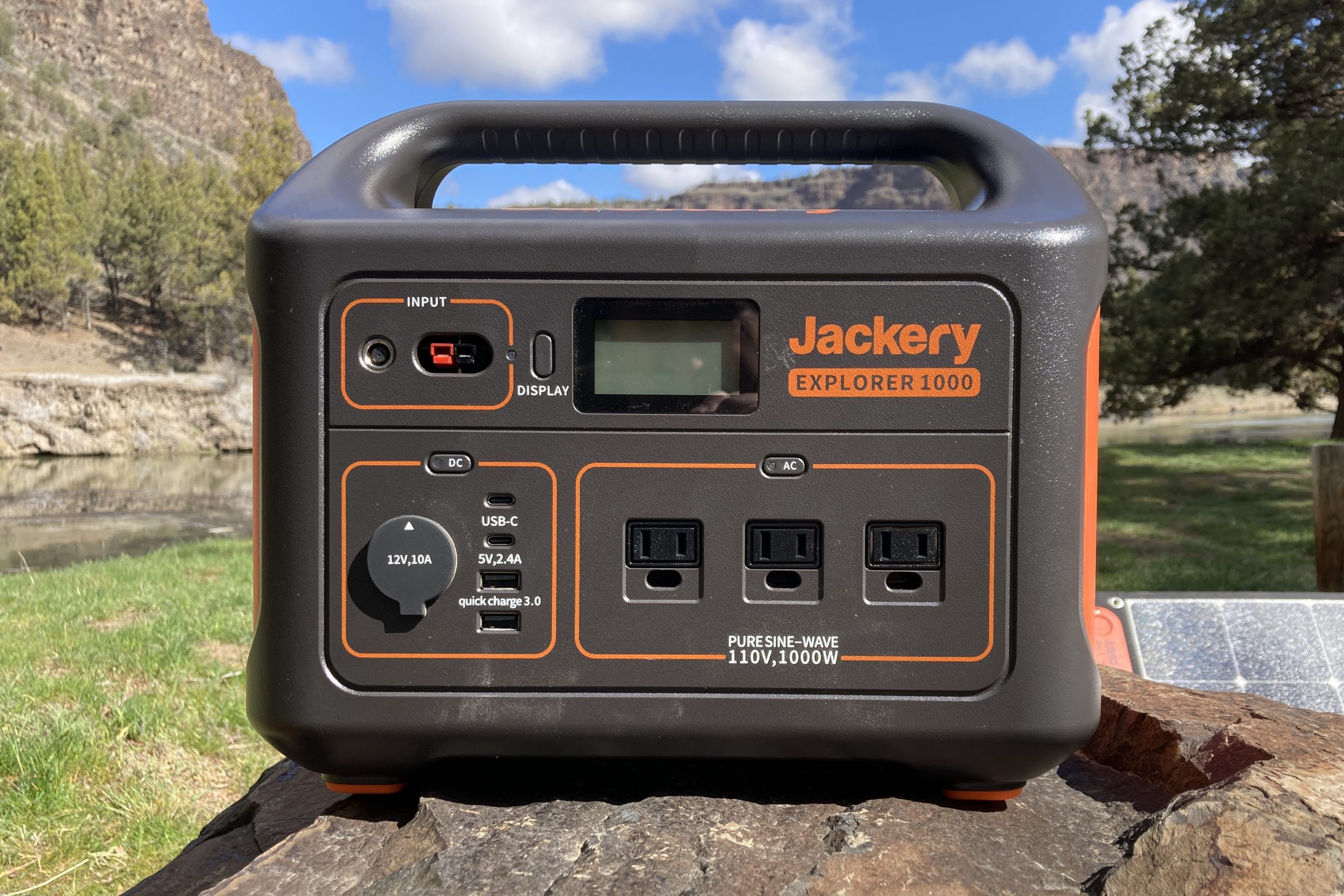 There’s no doubt about it, when it comes to the gasoline generator, recreational vehicle owners either love it or hate it. Yes, everyone loves the power that the traditional generator provides, yet nearly everyone loathes the noise and noxious fumes that it creates. Fortunately, lithium batteries combined with an inverter and a decent solar power system is a great alternative for RV owners. Yet, the big problem with this greener alternative is the cost. Buying everything you need for a comparable system in an RV can cost thousands. The other problem, of course, is space. Many truck campers and vans simply lack it and have room for only one group-27 battery not to mention the limited amount of space needed for a large, roof-mounted solar power system. In this article, we review the Jackery Explorer 100 Solar Generator.

Enter the Jackery Explorer 1000 Solar Generator. Consisting of a portable power station and two portable 100 watt solar panels, the Explorer 1000 comes with everything you need to power off-grid essentials such as induction cooktops, coffee makers, portable refrigerators, ham radios, and laptops, without taking up a lot of space. You can even use the Explorer 1000 to recharge electronic favorites like cell phones, camera batteries, laptops, hand-held radios, and drone batteries. Better yet, you can buy the Jackery solar generator without breaking the bank. The cost for the Jackery 1000 Solar Generator is only $1,549 on Amazon.com.

The heart of the solar generator is the Jackery Explorer 1000 Portable Power Station. The unit weighs 22 pounds and consists of a 46 amp hour, lithium battery with built-in AC and DC battery chargers, an MPPT solar charge controller, a battery monitoring system (BMS) with over voltage and short-circuit protection, a 1,000 watt pure sine wave inverter with a 2,000 watt surge capacity, and a battery meter that displays the station’s state of charge (if you need more power, Jackery also sells an Explorer 1500). The unit features two USB-C ports, two standard USB ports including a quick charge port, one standard 12 volt “cigarette style DC port, and three standard 120 volt AC outlets. The AC and DC outputs are activated on the power station’s face with the simple push of a button. Charging is primarily accomplished using the two 100 watt solar panels, of course, but standard 120 volt AC, and 12 volt DC power sources can be used to charge the unit as well. The internal circuitry allows the unit to be used simultaneously while charging. 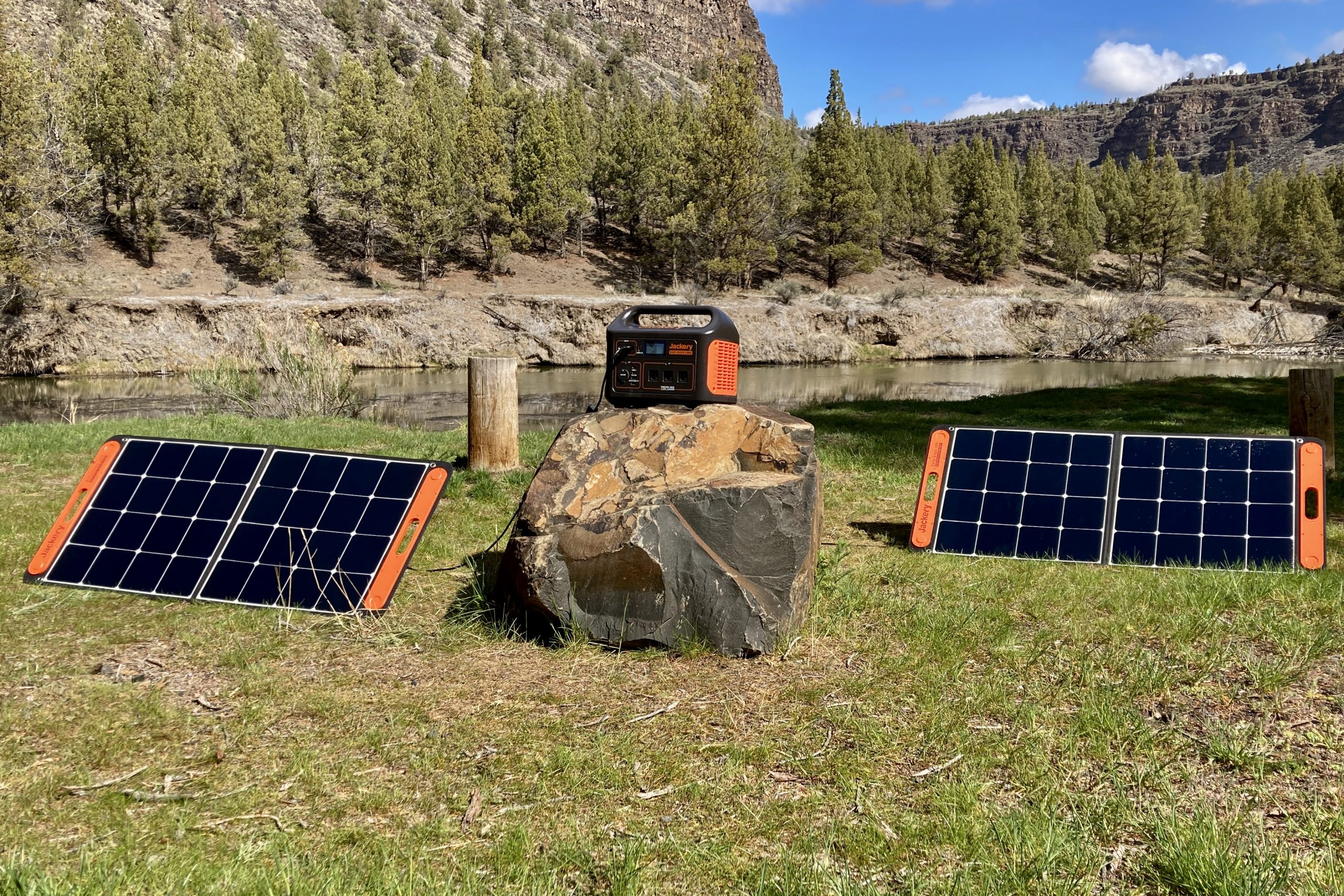 The charging times are acceptable for a 1,000 watt solar generator. Jackery claims that you can fully charge the power generator in eight hours using the SolarSaga solar panels, while seven hours are needed to recharge the unit using household AC and 14 hours to fully recharge it using a standard the 12 volt “cigarette style” DC plug. Based upon our experience, Jackery’s charging times appear to be pretty accurate.

A good solar generator needs a good solar power system and the two SolarSaga 100 watt portables will not disappoint. The panels plug-in easily to the power center using the parallel adapter which is included. To say we are impressed with these portable panels would be an understatement. Constructed using monocrystalline silicon cells with a 23 percent efficiency, each 18 volt panel weighs only 9.1 pounds, comes with its own kickstand, and can generate up to 5.5 amps each using the Explorer 1000’s built-in MPPT charge controller. Latching of the foldable panel is accomplished quickly and easily using a pair of magnets which are built-in to the orange handle at the top. Those who have owned portable solar panels in the past can appreciate how quick and easy the magnetic latching system truly is to say nothing of the panel’s surprisingly low weight. Look for a complete review on this portable solar panel soon. 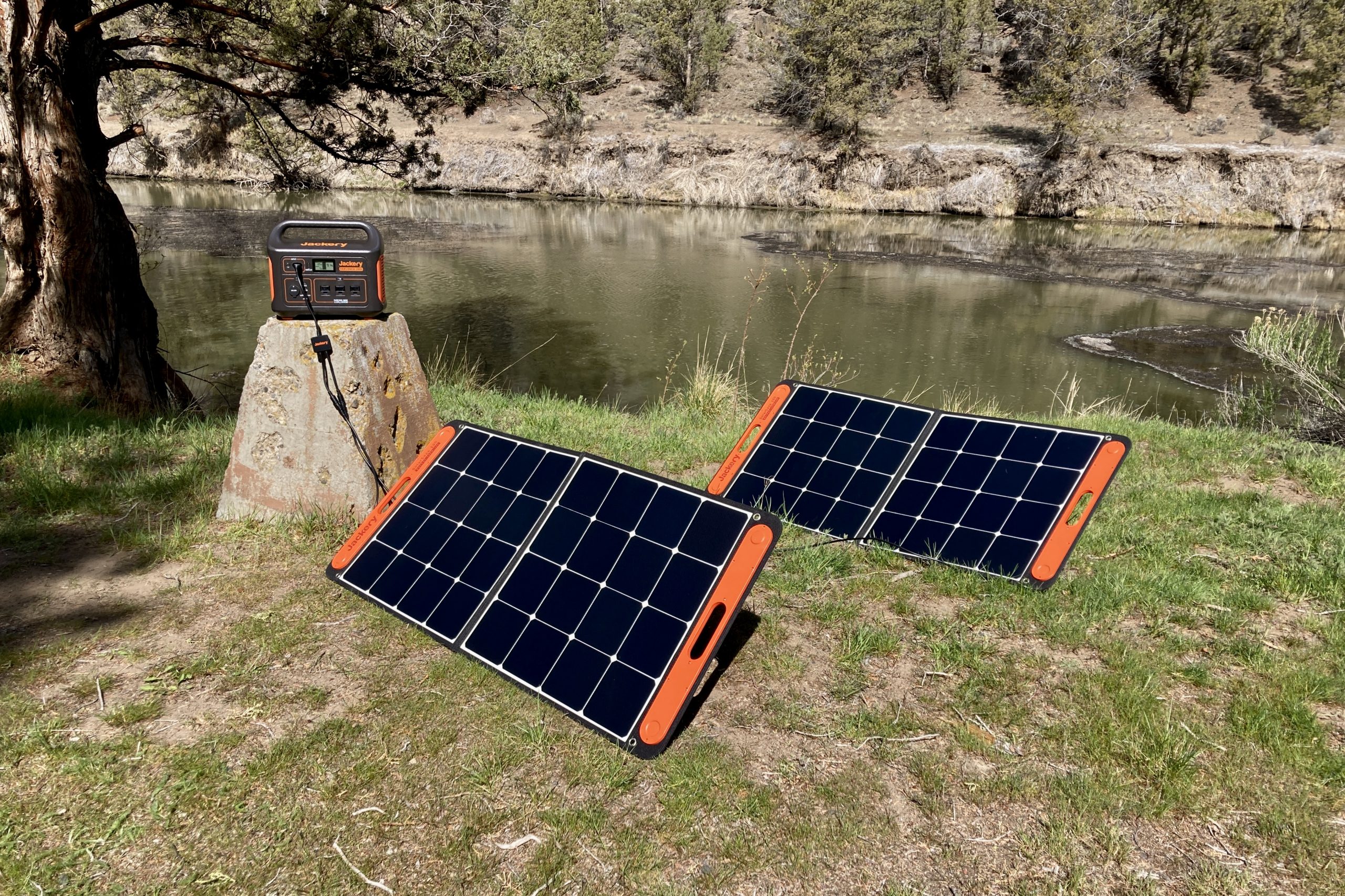 Unfortunately, Jackery has made using the SolarSaga with your RV difficult. The vast majority of portable solar panels are equipped with a universal SAE plug, but not Jackery’s. The company opted to use an 8mm barrel connector for use with their portable power stations instead. The barrel connector works well in that regard, but Jackery should have included either an 8mm adapter with an 8mm female connector on one end and an SAE plug on the other or another parallel adapter with an SAE plug on the end. This was and continues to be a source of real annoyance for not only us, but for others who bought this portable panel or use with their RV. We realize that these portable panels were made to be used with Jackery’s power stations, but RV owners will want to use these with their RV as well since so many use portable solar panels as part of their solar power setup. Fortunately, getting the right adapter or making what you need isn’t that hard. We simply made our own parallel adapter by calling Jackery’s customer service hotline at 888-502-2236 and ordering another adapter and replacing the Anderson plug on the end with an SAE plug.

The big benefit of the Jackery Explorer 1000 Solar Generator, of course, is that it’s green and quiet. Unlike the standard RV generator that requires a fossil fuel to operate, the Explorer 1000 uses the sun using state-of-the-art MPPT solar technology. It does this without generating any noxious fumes and is practically silent when in operation. Compare that to the noise and smell of a generator—to say nothing of the need to carry a gas can or two—and you can already see the advantages of owning a solar-powered generator. Yes, it’s true that you still need to store the generator’s two solar panels, but they’re incredibly thin and light and are much easier to store than the heavy Zamp 160 watt suitcase that we used to haul around. Plus there’s no gasoline smell to deal with. 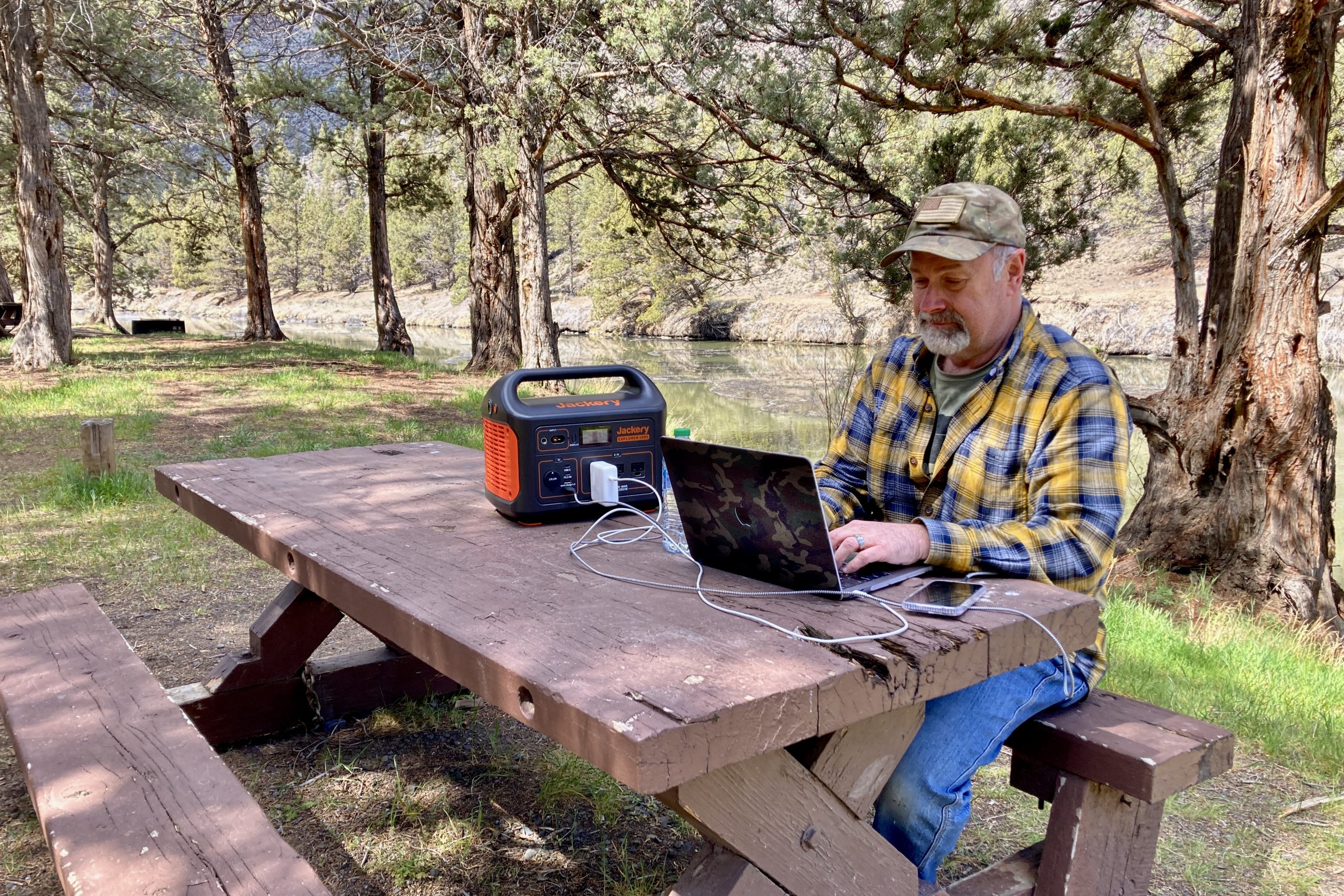 While the Jackery Explorer 1000 Solar Generator offers numerous benefits, the biggest pro, by far, is its portability and where it can be used. Unlike the traditional generator, you can use the Jackery portable power station practically anywhere, including in your car or truck, in your home during a power outage, and in the great outdoors. Moreover, those who own small truck campers, vans, camper shells, and truck toppers like the AT Overland Atlas and Four Wheel Camper Project M will benefit the most from this unit since many of these basic rigs have no power sources at all. Of course, many will want to use it to supplement the power in their truck campers, since many campers lack an inverter and lithium battery and the special charging devices that lithium batteries require. And if more power is needed, Jackery also offers an Explorer 2000 Pro model with a 2,200 watt inverter.

Overall, we’re impressed with the Jackery Explorer 1000 Solar Generator. The unit is attractive, easy to carry, and easy to operate and provides loads of power for extended off-grid use. We’ve used the generator at home during power outages, in our truck while on the road, and, of course, while camping. Indeed, truck camper and van owners will love this solar generator because it supplements existing 12 volt power systems so well as either a standalone unit or with the portable panels connected to your camper’s primary lithium battery bank. As a standalone unit, we plan on using the solar generator as a remote power station at future Truck Camper Adventure rallies.

So is the $1,500 cost for the Jackery Explorer 1000 Solar Generator worth it when you can buy a comparable, gasoline-powered Honda EU1000i for $300 less? That’s up to you to decide. Jackery’s power center weighs 6 pounds less than the Honda, yet when you factor-in the weight of a 5 gallon can of gasoline and the two solar panels, the weights of the two units are basically a wash. What it really comes down to is whether you prefer the noise and noxious fumes generated by the traditional gasoline-powered generator or the tranquility and clean air using a solar generator. When you factor in these benefits with the ability to use the Jackery indoors, it’s an obvious choice. What would we rate the Jackery Explorer 1000 Solar Generator, on a scale of 1 to 5 with one being the lowest and 5 the highest, we enthusiastically give the unit a rating of 5 stars. It’s a great product.

Truma North America will soon be supplying the US RV market with premium Truma Aventa rooftop air conditioners. The Truma Aventa will be offered in two models that minimize noise and maximize comfort in a [read more]