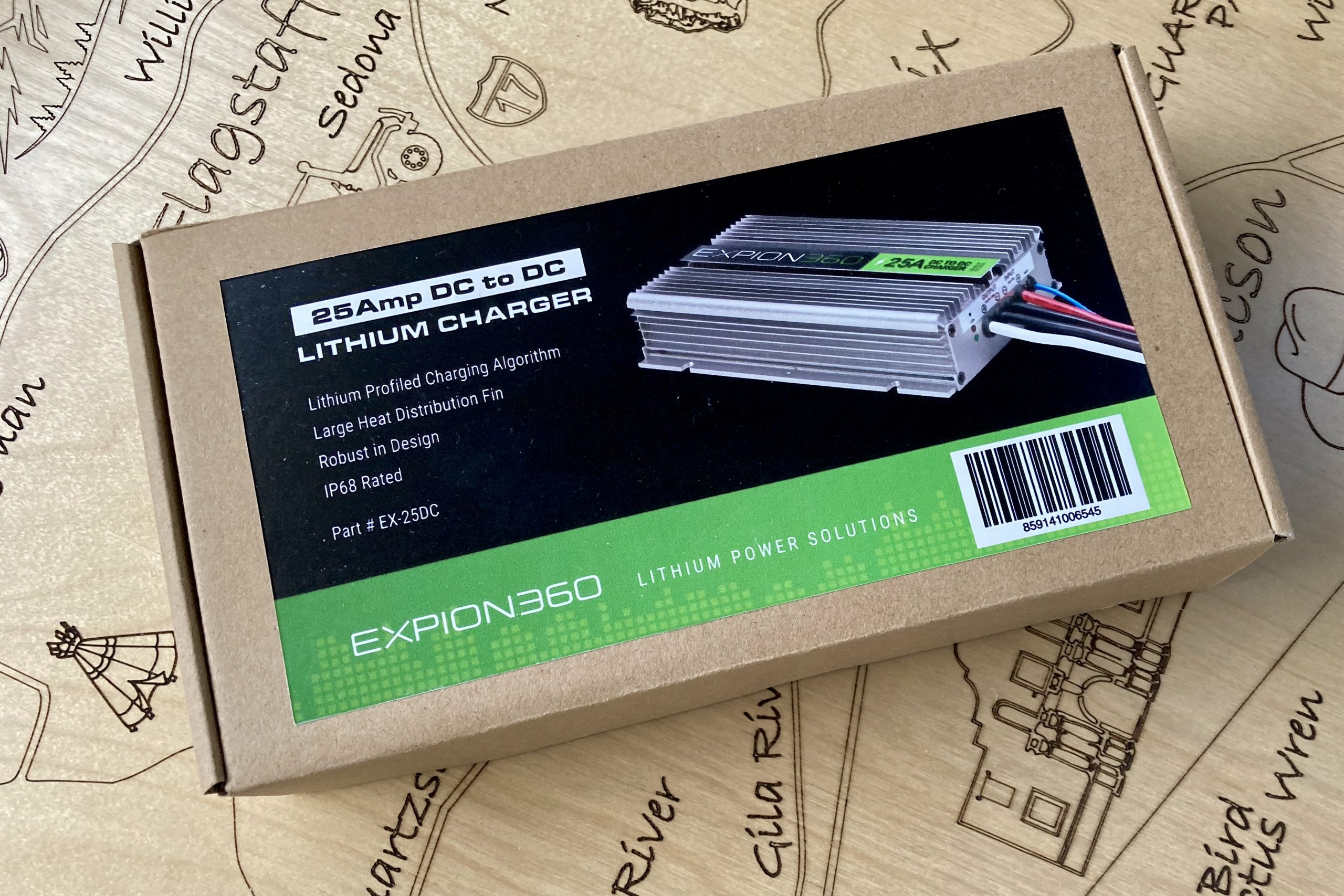 Have you ever camped in an area without the replenishing rays of the sun for days or weeks at a time? Have you ever left a pristine boondocking spot because the state of charge (SOC) of your battery was critically low? Are you looking for a way to keep the lithium battery in your camper charged without having to rely on a generator? If you answered yes to any of these questions, you aren’t alone. Yes, we all love solar power. It’s an effortless way to keep the batteries in your camper charged, but due to overcast skies you can’t always rely on it to say nothing of the night. On the other hand, the alternator in your truck is always there. Why not use it to charge the battery in your camper? In order to generate the required 14.6 volts to charge a lithium battery, however, you will need a good DC to DC Charger. A relative newcomer in today’s market is the Expion360 EX-25A DC to DC Lithium Charger. This is a review of that product.

The Expion360 EX-25A DC to DC Lithium Charger is one of the Expion360’s newest products. The charger is compact, easy to install, and simple to use. It measures 7.09 x 4.72 x 1.57 inches, weighs only 2.5 pounds, and offers an efficiency of 91 percent. The charger is designed to charge the battery in your camper using the alternator and starting battery in your truck. Moreover, the mobile charger is specifically designed to charge the Expion360 VPR 4Ever Classic and Platinum batteries and can be used with other LiFePO4 chemistry batteries that recommend the same charging profile. The list price for the Expion360 DC to DC Charger is $275.

Wiring for the EX-25A DC to DC Lithium Charger consists of five wires: the four positive and negative input and output wires and a blue ACC input wire, which is used to power the unit on and off. Normally, the ACC wire is wired directly to an ACC terminal in your truck, which activates the charger when your truck’s engine is running, but we elected to go another route by using the 12 volt charge wire in the OEM 7-pin connector instead (more about this decision and how it works under installation). As is typical, the positive and negative input wires of the Expion360 DC to DC Charger is wired to the truck’s battery NOT the truck’s alternator.

The Expion360 DC to DC Lithium Charger uses a two-stage constant current (CC) constant voltage (CV) charging profile at 14.6 volts and 25 amps. As such, the charging profile consists of bulk and absorption stages with no need for float or equalization stages. The latter two stages aren’t needed because LiFePO4 batteries have a very low self discharge rate and do not sulfate by being left in a partial state of charge. Here’s how the two charging stages in the EX-25A work:

First, we want to give a shout-out to our friends at AM Solar in Springfield, Oregon who provided the ancillary equipment and expertise to install this unit. We also want to give a shout out Cal Willis, Duncan Crawford, and Steve Hericks who previously published their vehicle charge system modifications here. Their charging systems were an inspiration and provided valuable lessons that were applied when building our system.

Here are the parts we used to install our Expion360 DC to DC charger:


The Expion360 DC to DC Lithium Charger is air cooled. This means the unit needs to be installed in a location with some air movement. The instructions state that the unit can be mounted outside, such as on a vehicle frame rail. However, with the unit being air cooled, this also means that you cannot install it in the engine compartment or else it will overheat. After surveying our options, we decided to install it in the battery compartment of our camper. Mounting it underneath the truck wasn’t really an option because of our preference for dirt roads and we didn’t want to install it in the cab of the truck either because that would require drilling holes underneath the cab. Installing the charger in the battery compartment of our camper was a no-brainer not only because it’s a clean and dry space, but also because the existing 12 volt charge wire had already been run to the battery compartment.

Why did we decide to use the 12 volt charge wire from the 7-pin connector for the charger’s ACC input rather than connecting it to an ACC terminal in the truck? Two reasons. A three-wire Anderson plug for the positive and negative wires and the ACC wire would be needed and we couldn’t source one in time and because the 12 volt charge wire from the 7-pin connector had already been run to the battery compartment. Going this route, however, created one major problem—voltage is always present on the wire. Obviously, this isn’t a good thing because this would discharge the starting batteries in our truck within a couple of hours. To prevent this from happening, Mitchell Boyer, Systems Engineer at AM Solar, came up with the idea of inserting a Victron voltage disconnect switch in the ACC circuit. Called the “Smart Battery Protect,” this 65 amp Bluetooth controlled switch keeps the DC to DC charger “off” when the alternator isn’t running, and “on” when the alternator starts up (in the settings, 12.7 volts is used for shut down and 12.8 volts for start up). So far, Mitch’s approach has worked flawlessly.

The rest of the components used in our installation are pretty standard. For the input side, we used 6/2 AWG wire with an Anderson Plug located at the back of the truck. For 25 amps, this size of wire is more than adequate. The positive wire to the Anderson Plug is protected using a Blue Sea Buss 40 amp fuse, which is mounted to the firewall in the engine compartment, while the negative wire runs directly from the starting battery to the Anderson Plug. Some may question the wisdom of installing the 40 amp fuse in the engine compartment due to the heat in the compartment, but this particular fuse is marine-grade quality with a 185F temperature rating. We’ve never had an issue with it tripping even during Arizona’s triple-digit heat and it’s what AM Solar uses in all of its installations.

If your camper is like ours, you’ll need to dismount your camper to run all the wiring underneath the camper. We ran a 6-foot-long pair of 6 AWG wires from the DC to DC charger to the rear of the camper where they connect to the 20-foot-long 6 AWG wires that were run from the starting battery. We used a standard Anderson Plug to connect these two runs of wire though a heavy-duty, wall-mounted socket and plug can be used to connect these two wire runs as well. There are merits to going either way.

Simply put, the Expion360 DC to DC Lithium Charger works great. With our truck at idle, the charger generates about 21 amps with it generating a full 25 amps at highway speed. How well does the system work, charging our Expion 360 amp hour cube battery? During one recent trip in Utah and Arizona, we had depleted our truck camper battery to a 57 percent SOC (203 amp hours). After two hours of Interstate driving in the full sun, the SOC of our battery was boosted to an amazing 81 percent (289 amp hours). Of course, part of this charging—about 18 amps—was provided by our solar power system for about 43 amps total, but still, it is great to see how quickly we can recharge our battery with just a little highway driving. The 43 amps combined total easily exceeds what our Progressive Dynamics converter-charger puts out on shore power alone, which is typically about 25 amps.

Why didn’t we go with a higher rated DC to DC charger? We considered going with a 50 or 60 amp unit like those made by Redarc, but with a single 160 amp alternator in our Ram 3500, we didn’t want to overtax it. Our diesel truck needs lots of power too, especially when running the air conditioner. We want to fully evaluate this 25 amp system before going with a larger system. If we ever do decide to go with a larger system, we’ll probably just add another Expion360 DC to DC Charger in parallel for a total of 50 amps.

This is easily one of the best truck camper modifications we’ve EVER made. We wish we had done it years ago. If you’re deliberating the merits of this modification, you really shouldn’t, especially if you like to boondock. It’s not that hard. If you know how to wire a 12 volt battery, you can wire up this unit. But give yourself a little time. If you’ve never done a job like this, you’ll probably need a couple days to do everything, one day for the truck, the other for the camper, but once it’s done you’ll have the satisfaction of knowing that you did the job yourself. If you aren’t confident in your abilities or if you don’t have the time, you can hire the job out to a shop that specializes in installations like this like AM Solar. They’ve installed hundreds of these systems and have the engineering expertise onsite to tackle any problem that may arise. What would we rate the Expion360 EX-25A DC to DC Lithium Charger? With a rating between 1 to 10 with 1 being the lowest and 10 being the highest, we enthusiastically give this product a 10. It’s a great product. 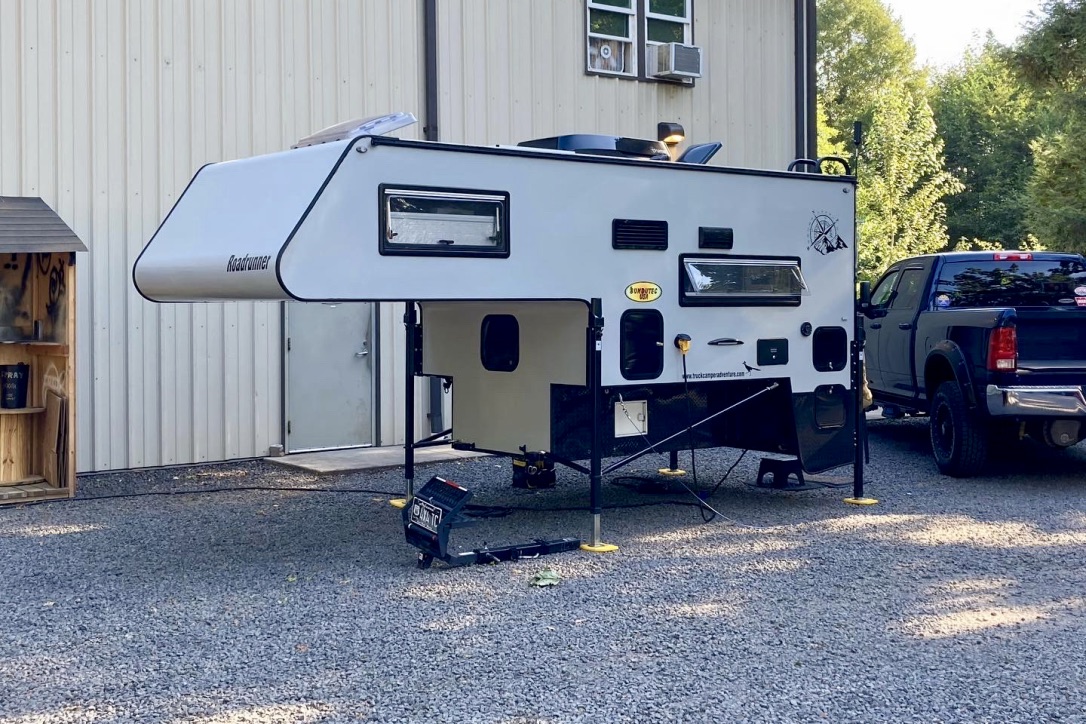 Benefits of the Lithium Iron Phosphate Battery For RVs

Every now and then, a technological breakthrough occurs that has a major impact on the RV industry. One that is creating a lot of buzz and excitement within the boondocking community is the lithium Iron [read more]