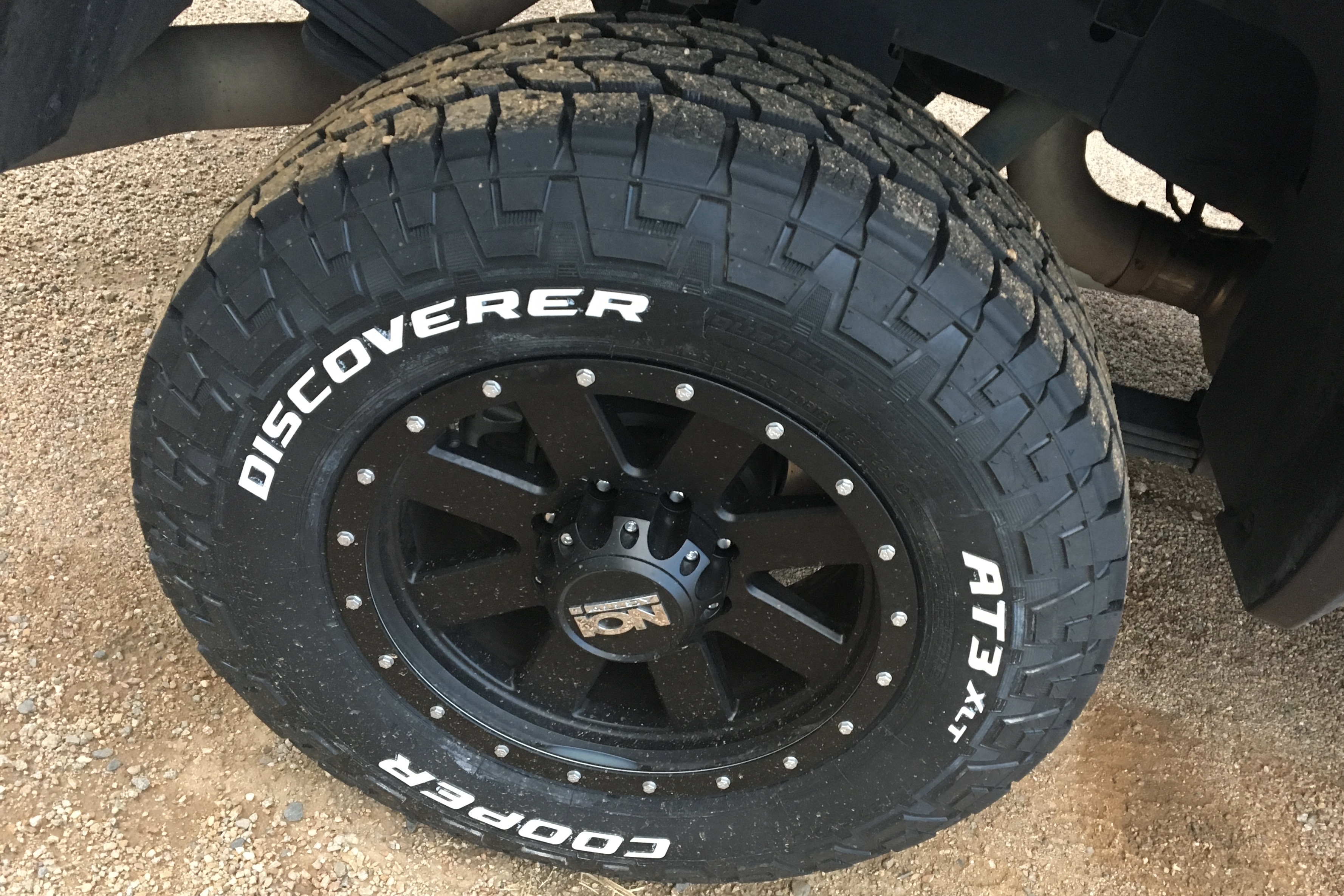 So you’re thinking about buying a set of all-terrain tires for your truck camper rig. That’s great that you’re doing research beforehand, because when it comes to buying tires, most people put very little thought into the selection process and rely on the recommendation from a tire shop sales associate instead. That’s fine if the associate knows his stuff, but some associates clearly don’t. That’s unfortunate, because when it comes to your rig, everything is riding on your tires, literally. Indeed, most 3/4-ton and one-ton trucks weigh a good 7,000 to 8,000 pounds. Add a 3,000 or 4,000 pound camper and you’ve got quite a load resting on that rubber. It’s scary when you really think about it. If anything were to happen to one of those tires at highway speed, it could be a disaster. Sure, those who roll with a dual rear wheels have a little more room for error, but not much, because most have even heavier campers with multiple slide-outs. This is a review of the Cooper Discoverer AT3-XLT all-terrain tire.

One of the great things about owning a 4×4 truck camper rig is its ability to go practically anywhere. This means that you need a tire capable of rolling on all kinds of surfaces in all kinds of weather. Sure, a good highway tire will work if you spend most of your time traveling on pavement, but if you’re the more adventurous type, like us, you want a rig that can roll on both pavement and dirt—on a whim. This means your truck needs to be outfitted with a good, jack-of-all-trades tire that is up to the task. In other words, a good all-terrain tire. One of the best, most highly rated all-terrain tires in today’s market is the Cooper Discoverer AT3-XLT, a remake of a classic that earned SEMA’s 2018 New Product Award.

What makes the Cooper Discoverer AT3-XLT better than the other makes of all-terrain tires? First, Cooper Tires is a trusted name in the automotive industry. Based out of Findley, Ohio, the American-owned company has been in business for over 100 years. Even though the Discoverer AT3 has been in existence for over 40 years, Cooper launched an improved Discoverer AT3 in 2018, consisting of three distinct tires made for specific vehicles and purposes—the 4S (Four Season) for SUVs and light-duty pickups, the LT (Light Truck) for medium- and heavy-duty trucks, and the XLT (Extreme Light Truck) for extreme hauling and aggressive off-roading. In all, the Discoverer AT3 comes in 58 sizes from 15- to 20-inch and in three load ranges, including the coveted Load Range E used by most truck camper owners. While designed for hard-core use, the XLT still comes with a 60,000-mile warranty and is available in 29 sizes. 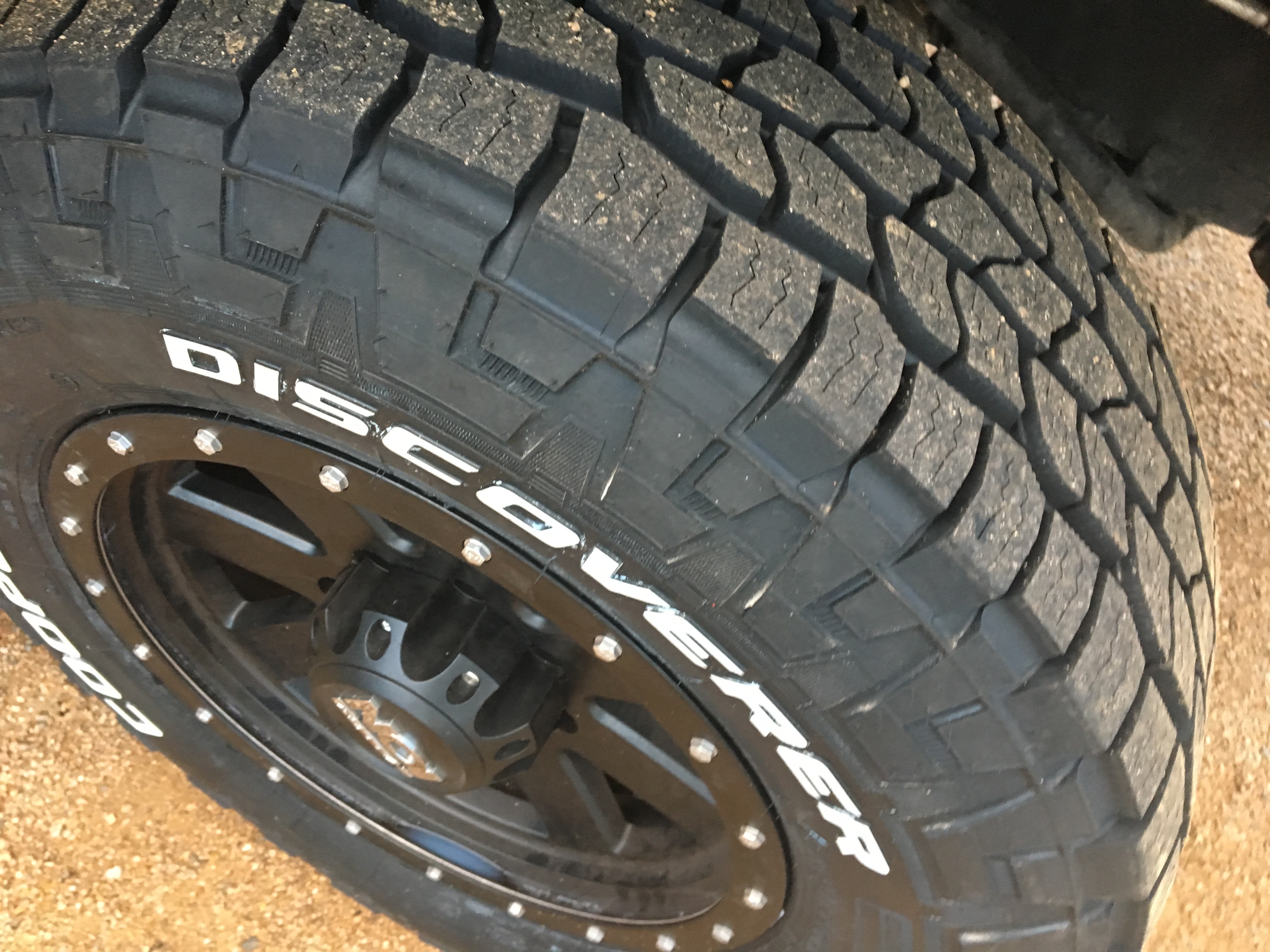 It’s apparent at first glance that the Cooper Discoverer AT3-XLT is not your average, all-terrain tire. The AT3-XLT sports an aggressive tread that stands out more than the “ho-hum” treads found on many other makes. It’s constructed using an innovative silica-based tread compound and Cooper’s Secure-Grip five-rib, all-terrain pattern to provide off-road driving capability and excellent traction in both wet and dry weather. The tire’s zigzag sipes and uniquely-shaped deep center grooves not only improve vehicle stability, while reducing stone retention, but also reduce incidences of hydroplaning. If you don’t think a truck and camper can hydroplane at highway speeds, think again. If an 18-wheeler can hydroplane, a one-ton pickup truck hauling a 3,000-pound truck camper surely can.

Cooper engineers upgraded the Discoverer AT3 with a number of important features. The best is what Cooper calls its “Durable-Tread Technology” that not only enhances its durability on both dirt and gravel, but also helps it stop better than other makes of tires—at least 10 feet shorter on wet roads and over 20 feet shorter in snow. The AT3-XLT also features a “Rugged Traction Shoulder,” which has big side-biting cleats that grip onto rocks while at the same time providing additional resistance to abrasions and cuts when driving over sharp rocks. This special shoulder consists of staggered side lugs called “Earth Digger Edges” that provide additional leverage to plow through loose dirt and sand or sticky mud. In addition, this mud and snow rated tire features Cooper’s Even Wear Arc Technology that provides consistent on-road tire wear and better handling, Stone Ejector Ledges that prevent small rocks from drilling into the tread, and “Whisper Grooves” that provide a quieter ride without sacrificing off-road traction.

We’ve been rolling with our set of Cooper Discoverer AT3-XLT size 275/70R18E tires since December 2018. This particular size of AT3-XLT tire weighs 57 pounds, has an overall diameter of 33.23 inches, a tread width of 8.9 inches, a maximum load rating of 3,640 pounds, and a tread depth of 16 (1/32 inches). When hauling the camper, we typically run with 65 psi in the front, and 80 psi in the back, the pressures recommended by Ram for our 2013 Ram 3500 truck. To improve the ride with the camper off the truck, we usually run 65 psi in the front, and 45 psi in the back. So far, we’ve put over 8,000 miles on the set, rolling on pavement, dirt, gravel, rocks, and sand in all kinds of weather including snow and ice. In those eight months, we’ve taken our truck camper rig to Arizona, Nevada, Utah, California, Oregon, Washington, and Idaho.

Most overlanders enlist an all-terrain tire for off-road duty, but the Cooper Discoverer AT3-XLT absolutely excels on pavement hauling a 3,000-pound truck camper. From the beginning we were incredibly impressed with how quiet and smooth the tires ran and that hasn’t changed in the eight months we’ve owned them. On the Nittos we had on our rig previously, the tires always felt “squishy” even when fully aired up, but not these. The Cooper Discoverer AT3-XLT’s are firm and rock solid and inspire a level of confidence that we’ve never experienced before with the other makes of tires. Indeed, this level of confidence never wavered even when traveling on snow and ice and on steep and twisting, rain-soaked mountain passes. Wearability of the Cooper Discoverer AT3-XLT after 8,000 miles is excellent with tread depths of 13 back and 14 front. While this shows an excellent tread wear rate it also shows how weight plays a role in tread wear and how important it is to regularly rotate your tires every 8,000 miles.

Update: Tread depths after 26,000 miles remains excellent with 9 front and back. 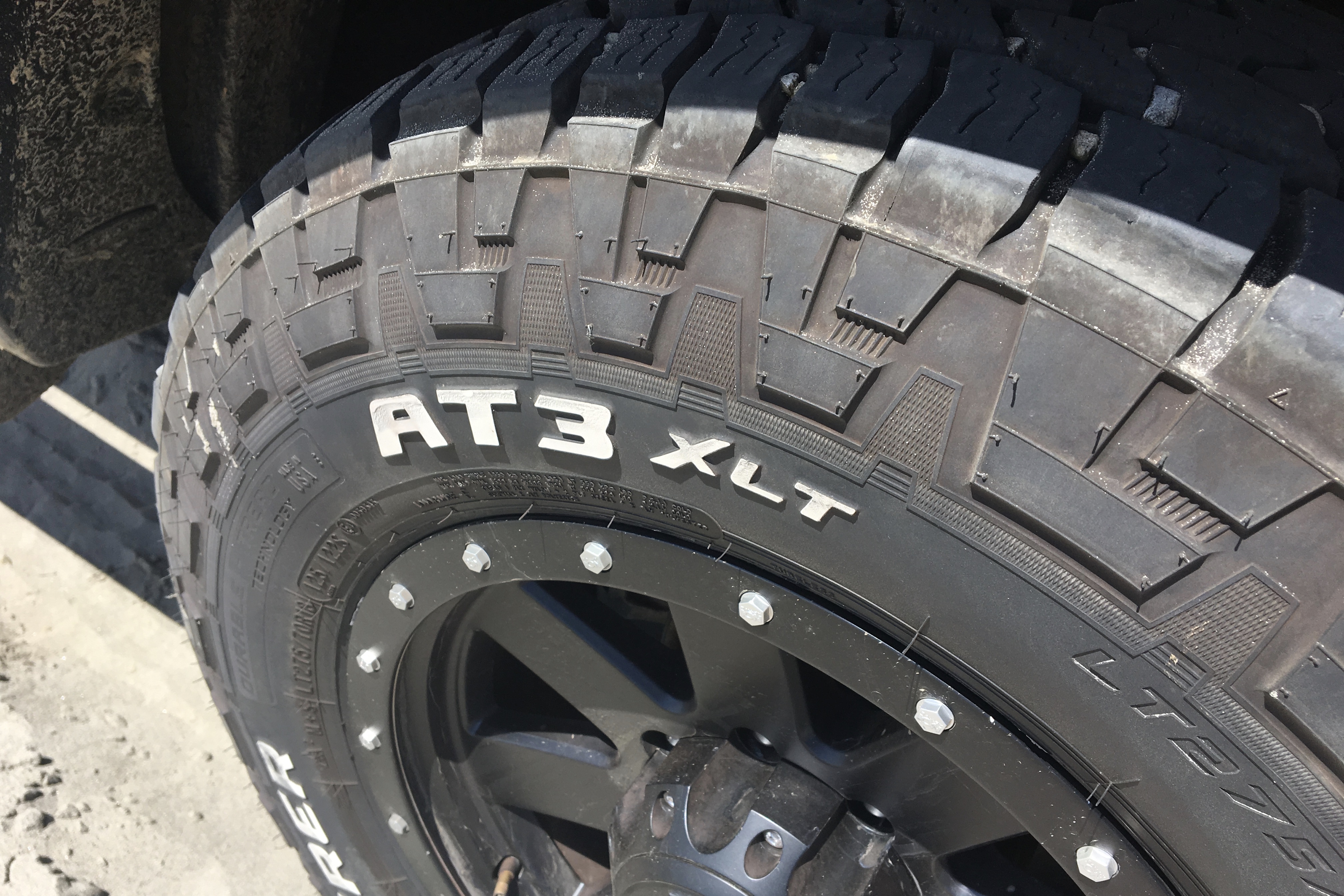 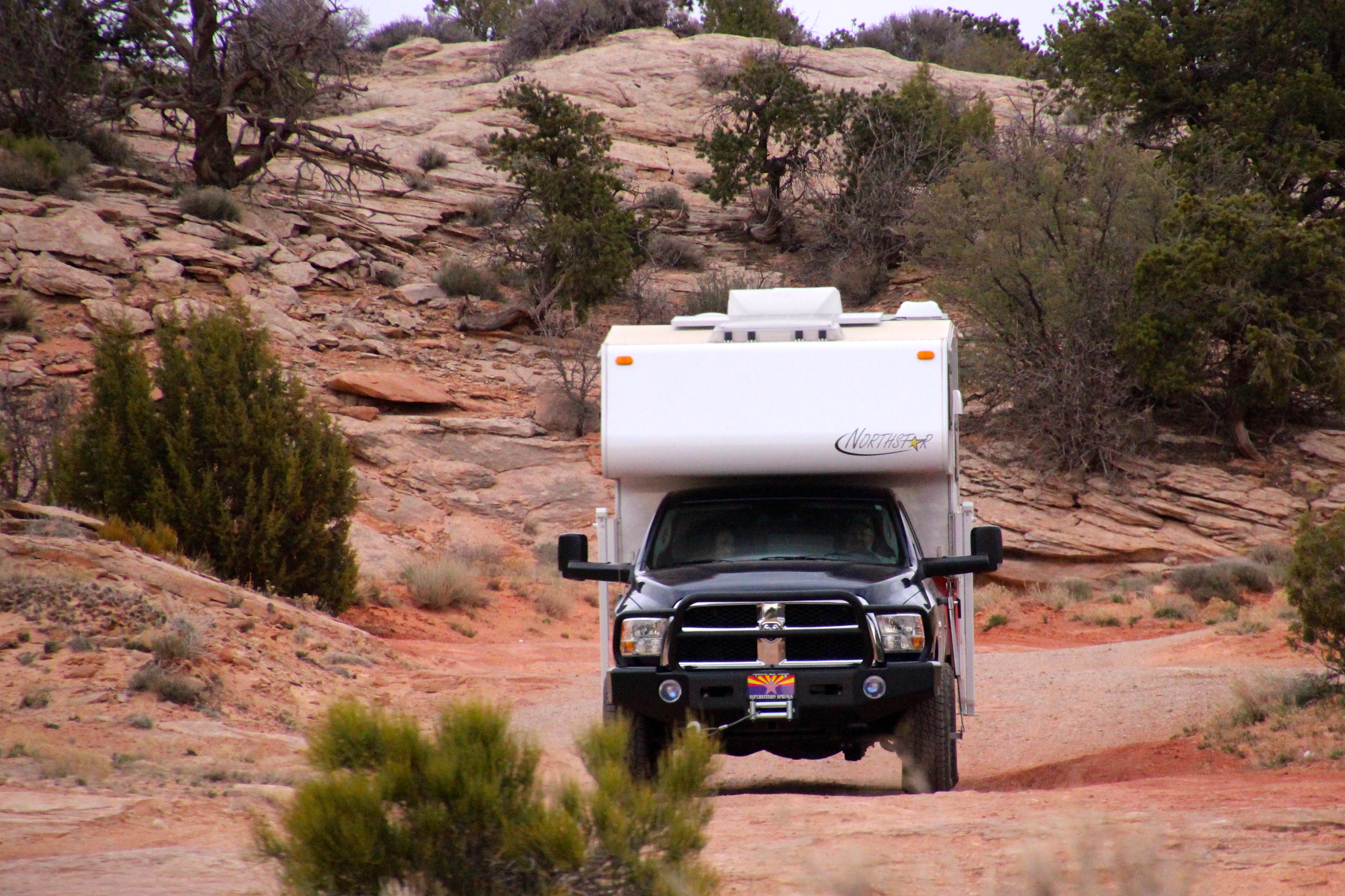 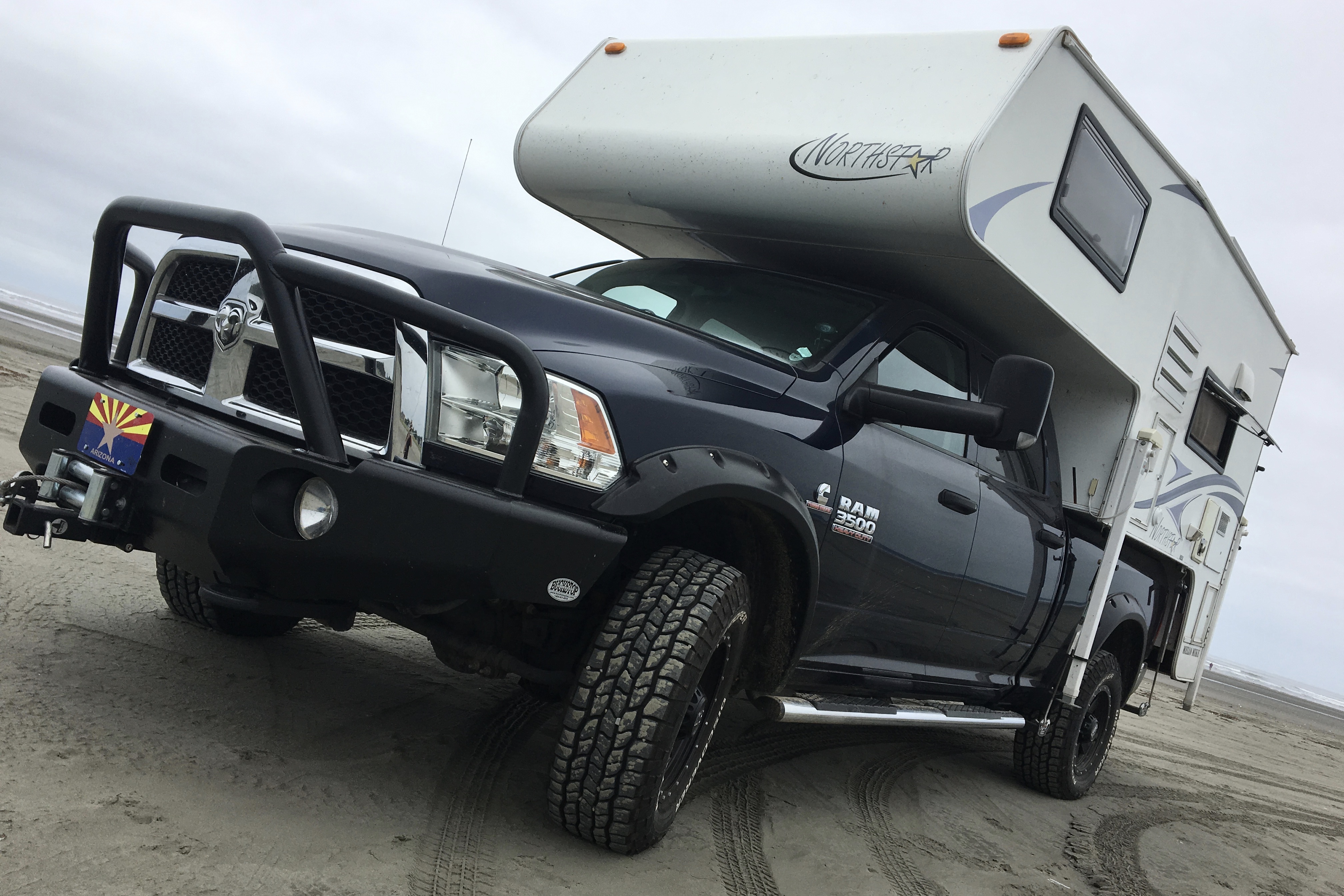 How well does the Cooper Discoverer AT3-XLT perform off-road? Incredibly well. We were particularly impressed with how well the tire maintained its grip in both mud and sand. Sure, we sometimes had to air down to 30 psi, but that’s to be expected when additional bite is needed to keep rolling on soft surfaces. But that’s not all. A critical aspect often overlooked in tire design is how well it resists cuts and chips when driving over sharp rocks. In this, the Cooper Discoverer AT3-XLT also excels because of the tire’s large tread blocks and rugged shoulders. Another thing we really like about the tire is it’s ability to maintain grip on steep, rock-covered grades. As you know, maintaining a grip on such grades is crucial to maintaining control, and in this the Cooper’s did amazingly well. Overall, we’ve been incredibly pleased with the tire’s performance off-road aired either up or down.

When it comes to the intricacies of tire construction and design, very few of us are real experts. Still, a good number of us have extensive experience behind the wheel with numerous makes and models of tires, so we know what works and what doesn’t. What makes a good all-terrain tire from a driver’s perspective? J.D. Power looks at five categories when it rates tires—overall satisfaction, tire ride, traction/handling, wearability, and appearance and that works for us too. We can’t provide an honest grade for wearability since we’ve only put 8,000 miles on our set, but in the other four categories, the Cooper Discoverer AT3-XLT not only meets our expectations, but exceeds them. Cooper really outdid itself when it redesigned the Discoverer AT3. This American-made tire can do it all and looks good going it. When it comes to the adventurous, like us, who are always looking to push the bounds of what’s achievable, what more could you want? On a scale of 1 to 5 with 1 being the lowest and 5 being the highest, we enthusiastically give the Cooper Discoverer AT3-XLT a rating of 5 stars. It’s a great tire.