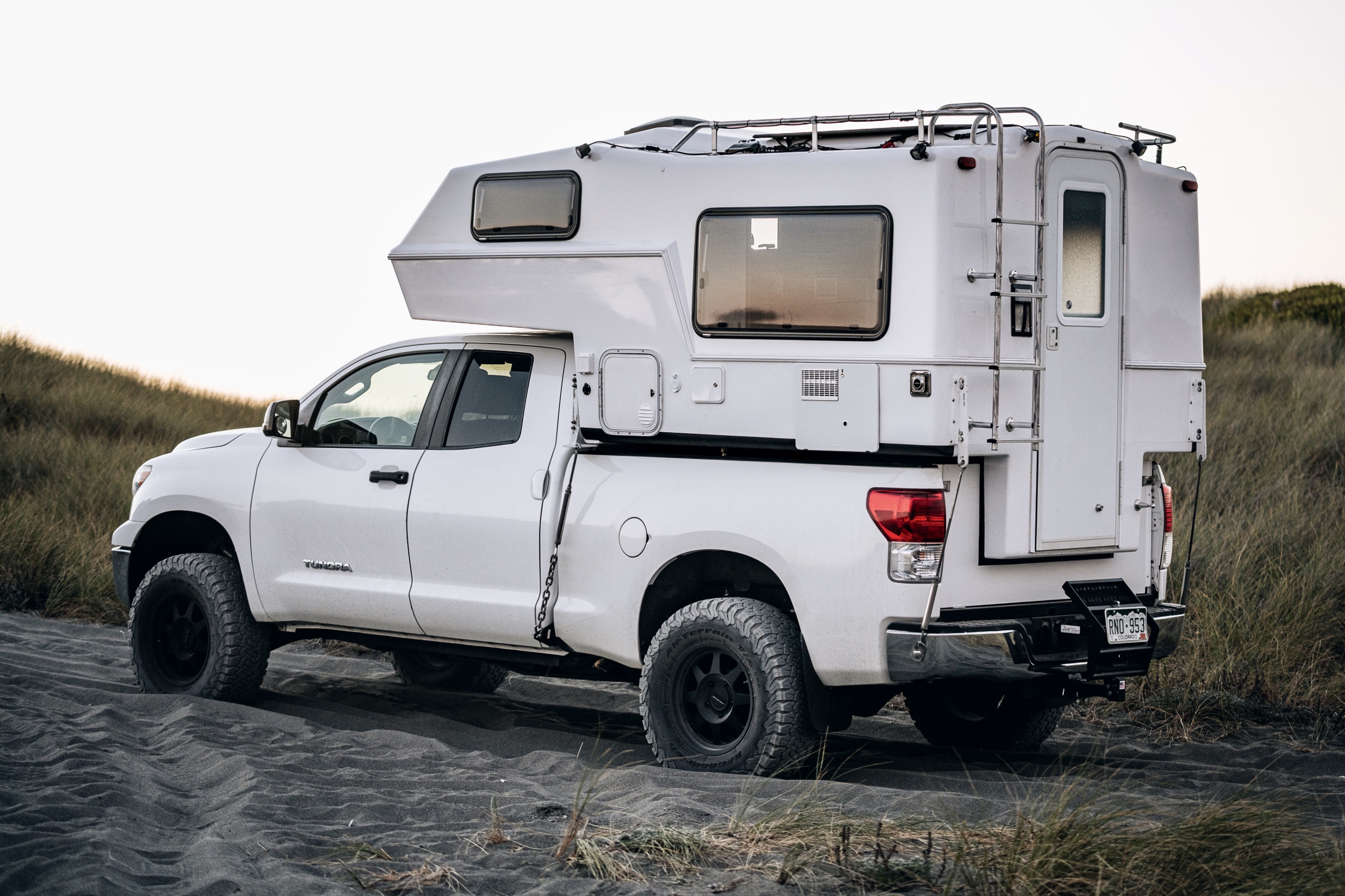 It’s no secret that Northern Lite makes a very popular truck camper. The quality interiors plus the long-lasting, fiberglass shell makes Northern Lite campers a hot commodity. Northern Lite builds several short-bed and long-bed models constructed primarily for today’s full-size one-ton pickup truck. But what the company’s catalog lacks is a smaller and lighter truck camper for today’s mid-size truck. The company actually made one year’s ago—the Northern Lite 6-10—but a devastating fire back in 2014 destroyed the only fiberglass mold and the company decided shelve the design primarily due to economics. Fortunately, due to the long-lasting quality, you can still buy a used Northern Lite 6-10, but they are becoming increasingly harder find. Kelly Lund, who goes by the name GopherDirt, on Instagram was able to score on an 2003 6-10 and restore it, or as he calls it, remodel it. The results of his work are impressive. To learn more about the remodel, Kelly was kind enough to answer several questions.

Thanks for talking with us, Kelly. We love your truck and camper combo? Where did you find your camper?

Kelly Lund: Thanks for having me, TCA is an incredible resource. I picked it up at a RV dealer in Mt Vernon, Washington in November 2019

What Northern Lite model is it? How much did you pay for it?

Kelly Lund: It’s a 2003 Northern Lite 6-10. I paid just under $10,000 for it. It seemed a little steep, but it’s a rare model and the only one I could find. When I found it online, I drove out from Colorado to Washington a couple days later, because these usually get snatched up quickly. All the appliances worked, but after using it for a few months on ski trips, we loved it so much, I decided to do a total remodel. Today, the only original parts from the old camper are the ladder/roof railing, porch light/handle, the propane storage box, and the actual fiberglass two-piece shell. 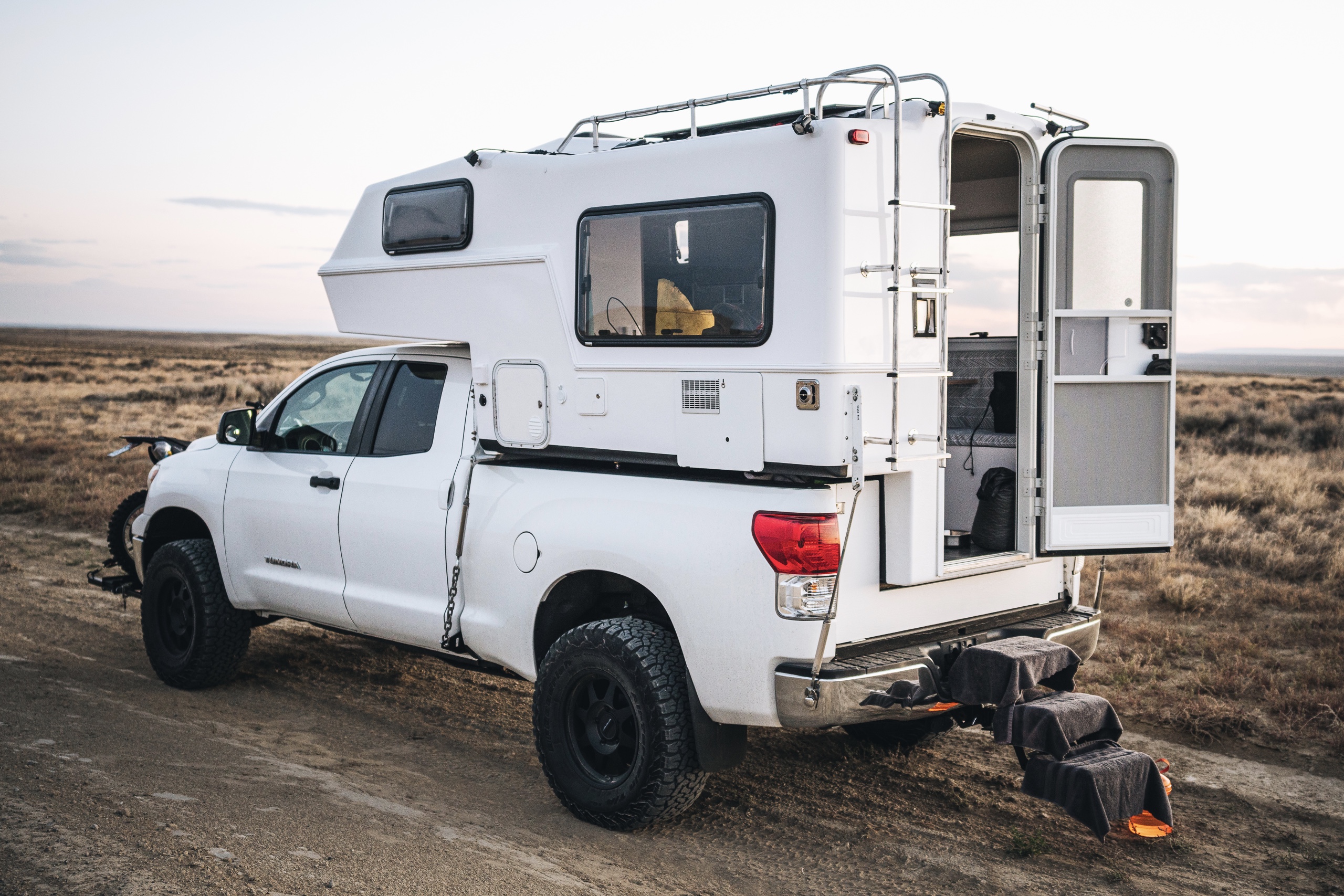 Being that the camper is rare, can you tell us about the floorplan and about some of its features?

Kelly Lund: With it being so small, there isn’t much room to switch things up from the original floor plan. The galley is on the driver side with closets on either side of the counter and cabinets above. On the passenger side, there is a small couch and table, a large fridge, and some cabinetry. The step up to the bed is a slightly larger than the original—holding the water tank, batteries, and most of the electrical components. The floor length is 80 inches so it sticks out just 2 inches past the 6-foot 8-inch-long bed on the truck. The cabover section is short and the bed sleeps east-west and is narrower than a full bed. The interior ceiling height is about 5 foot 10 inches so it might not be for everybody. For me, being 5-8 and my girlfriend, it’s perfect. It’s just a hair wider that the truck bed itself.

What are some of the specs of the camper?

Kelly Lund: Sure, it has a 20 gallon fresh water holding tank, a 6 gallon Dometic water heater (propane), and a 6 gallon grey water tank which is mounted in the bed of the truck. The camper is equipped with a 110L stainless Dometic fridge, two 100 watt Zamp roof-mounted solar panels, a 100 watt portable Zamp solar panel, three 100 amp hour Battle Born LiFeP04 batteries, and a 2,000 watt Victron AC power inverter-charger. We also outfitted the camper with a Victron DC to DC charger to charge the batteries while running the truck.

Is the camper equipped with a cassette toilet or a standard flush toilet? Does it have an indoor shower?

Kelly Lund: Nope, no bathroom or inside shower. For an outside shower, the sink faucet can be unscrewed and a hose mounted to it that can run out an open window.

Can you tell us about the camper’s heating and cooking systems?

Kelly Lund: It’s all propane and all Dometic. The air heater is 12,000 BTU’s. It’s a 6 gallon hot water tank, and a little two-burner cooktop. No microwave, no oven.

How much does the camper weigh dry and fully loaded?

Kelly Lund: The camper weighs 1,350 pounds after the remodel. The truck on its own weighs about 6,300 pounds full of gas. The whole rig fully loaded for a long trip with a motorcycle on the front, myself and my two dogs in it was 8,750 pounds.

We’ve seen photos of your restoration. What exactly did you do to the interior to make it look so modern?

Kelly Lund: We kept the colors as light as possible. Normally, I might think so much white might be a little too hospital-like, but in this case with this tiny space, it works well. Also, the huge lower windows help it not feel so small inside. We also grey washed the cabinets and used all stainless appliances to give it a grayscale, modern feel.

Did you do anything to the exterior of the camper?

Kelly Lund: Yes, quite a bit actually. The camper spent about a month with a fiberglass pro. About 12 different holes all over the camper were patched, from the original fridge vent, heater port, water heater door, etc. The cabover window holes were made smaller to properly fit the Overland Tern windows that we installed. Behind each of the tie down points aluminum plating was installed for reinforcement. The entire camper was repainted, matching it with the Tundra paint. Also the lower portion of the camper was sprayed with Raptor bedliner to protect the underside from the gear I store in the bed of the truck. The original clearance lights were replaced with LEDs and all exterior seams and penetrations were resealed. The porch light and handle was refurbished and reinstalled with a new LED light. We also replaced the original door.

Originally this model was built for smaller, mid-size trucks like the Toyota Tacoma and Ford Ranger, so to clear the cab on a Tundra, it’s mounted on a platform 6.75 inches tall. There are two bed length drawers built below it. The floor dimensions of the camper are quite small so the space in the bed on either side is large and a good place to store gear. I had to cut the original mounting points off because they weren’t wide enough to clear the bed rails, instead we used the camper jack mounting points for the tie down points as well—I’m using Happijac original turnbuckles.

We noticed that you have a custom tailgate. Did you make that?

Kelly Lund: Yes, I made it out of 3/4-inch plywood and painted it to match the color of the truck and camper. 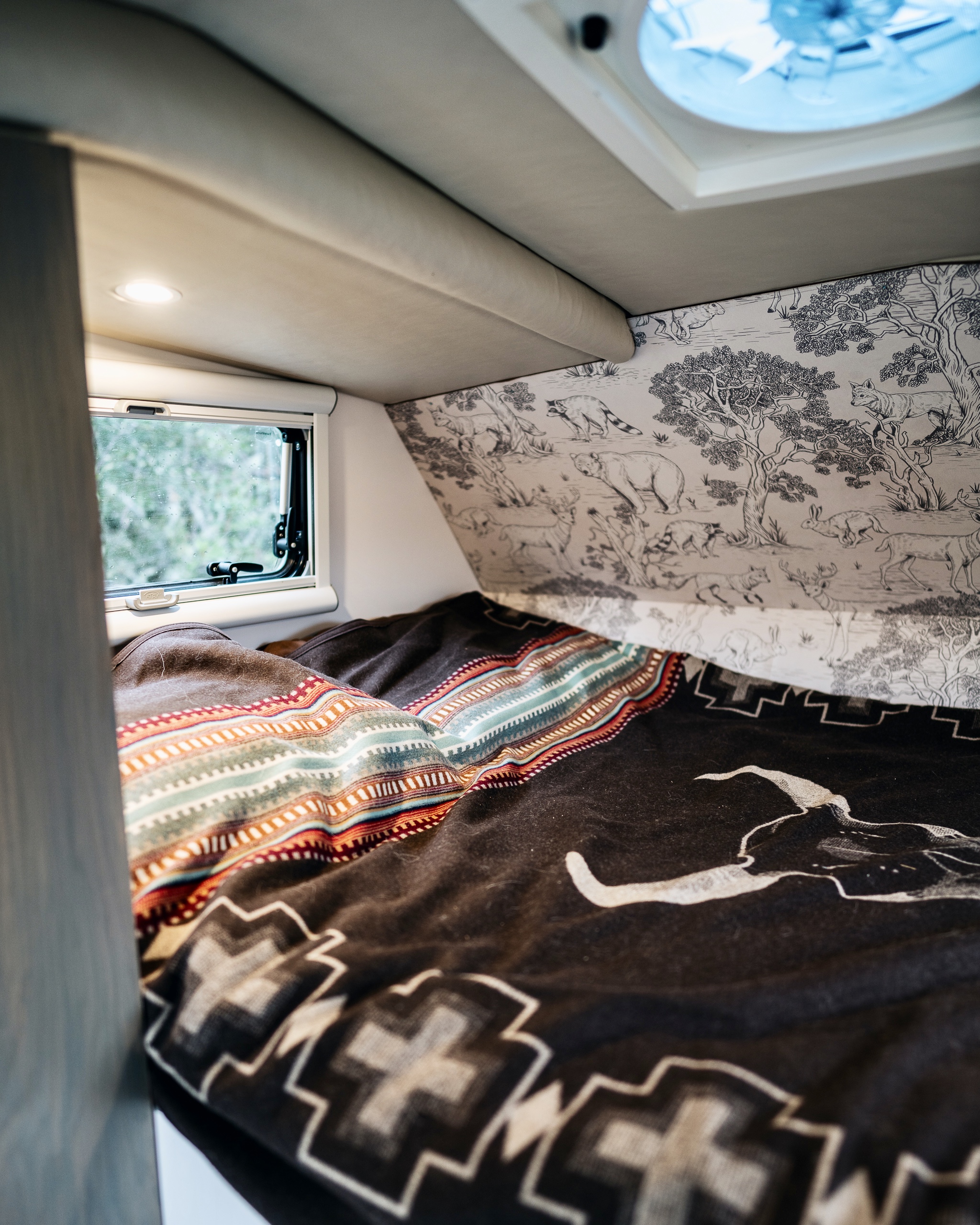 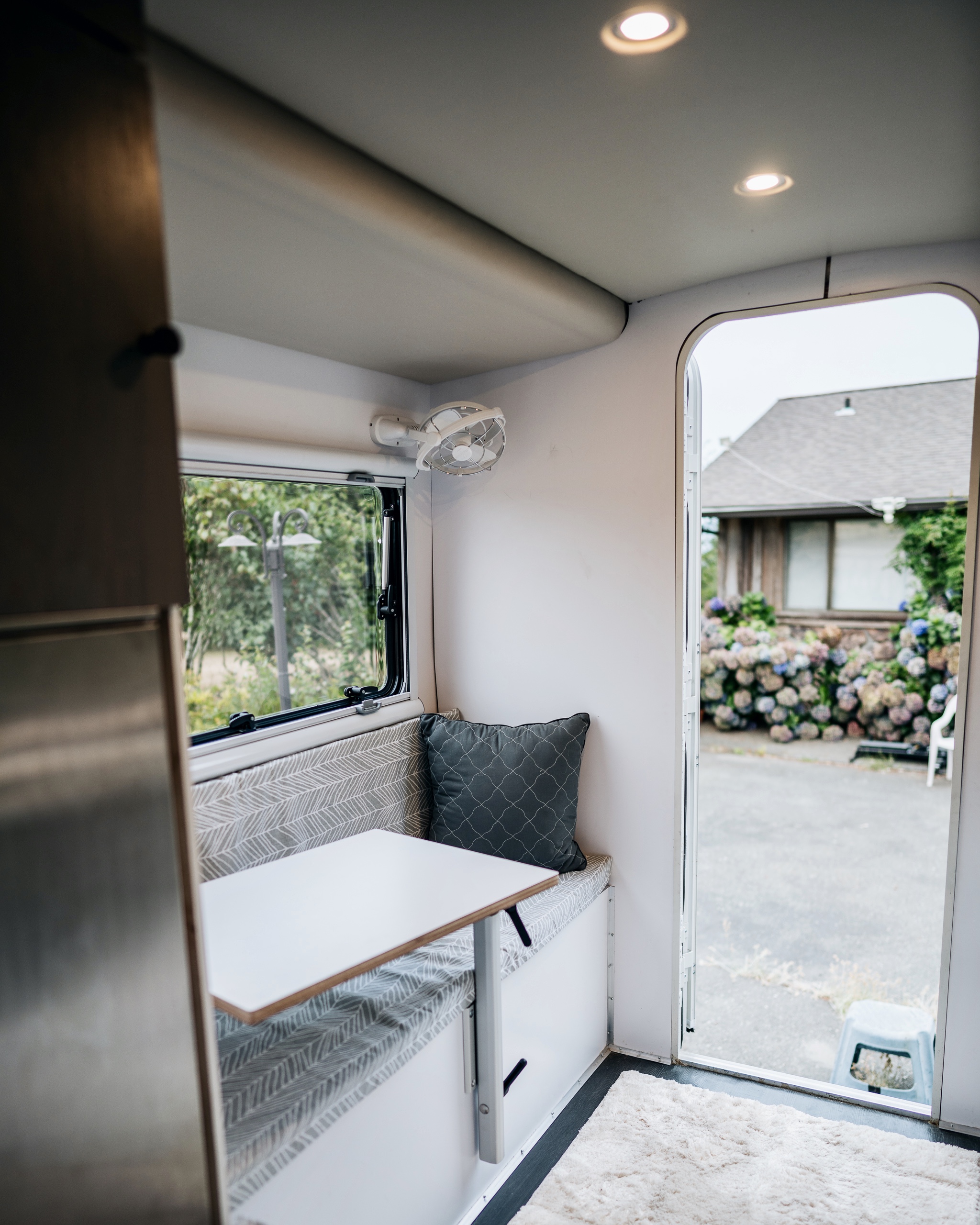 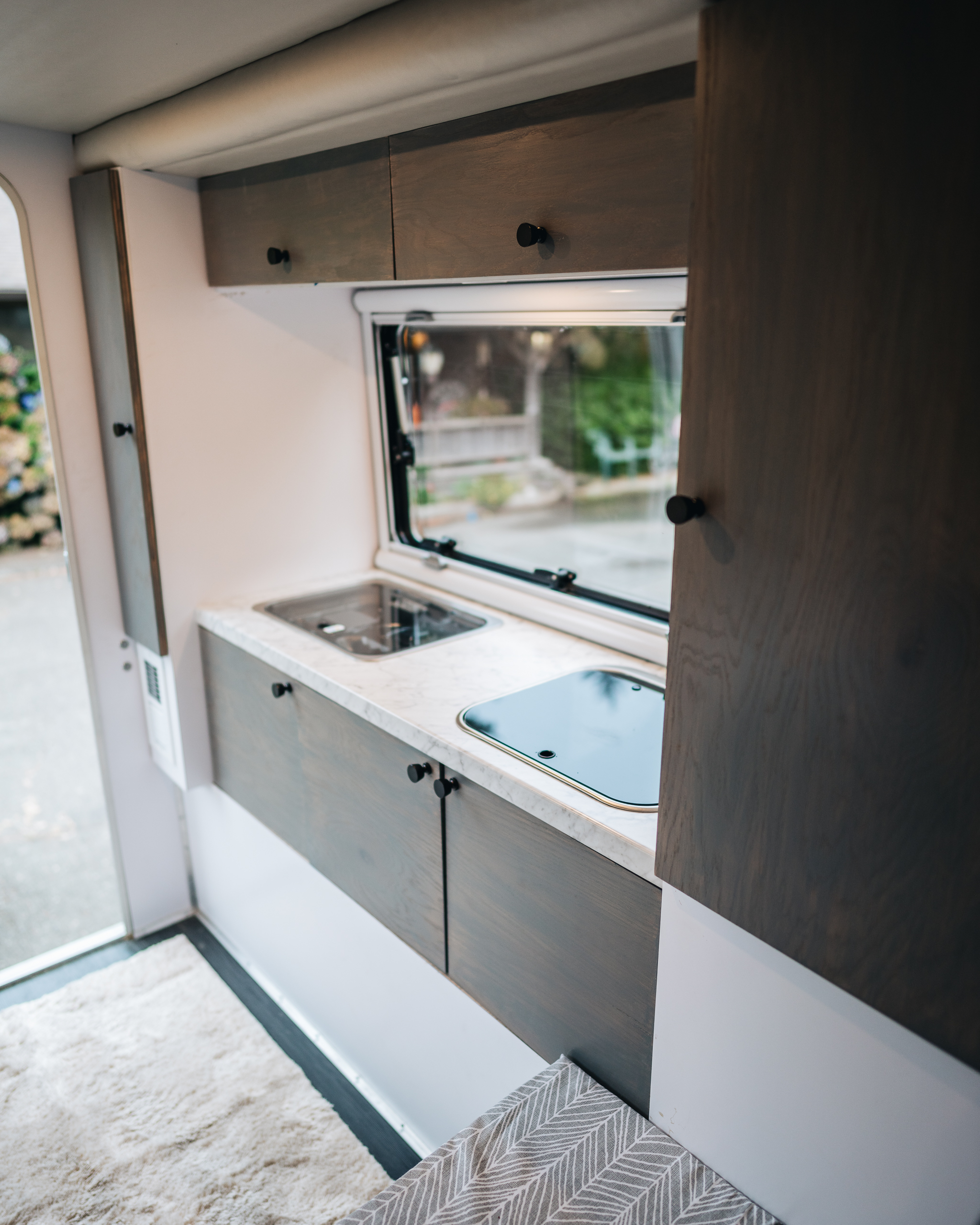 What year is the Toyota Tundra and what are the truck’s specs?

Kelly Lund: It’s a 2013 double cab with a 4.6L and a six-speed automatic transmission.

What upgrades, if any, were made to the truck’s suspension to carry your camper?

Kelly Lund: Just before we finished the camper, we overhauled the suspension. In the front, it has Fox 2.5-inch coilover shocks with reservoirs and DSCs adjusters as well as Timbren SES bumpstops. We cranked the coilovers tighter than normal because I carry a motorcycle on the front of the truck. In the rear, there are the same Fox 2.5-inch shocks with reservoirs and DSCs. The leaf springs are a heavy-duty Icon spring. Lastly, I have a set of Firestone airbags with Daystar cradles.

What other upgrades were made to the truck?

Kelly Lund: Not too many as of right now. One unique thing that we did was install a new OEM 38 gallon gas tank made for the latest generation Tundra to replace the stock smaller tank. I installed an aftermarket stereo with a screen to run a backup camera on the camper. I also removed the backseat and installed a platform for our two large dogs, Loki and Bailey, to ride on.

Can you tell us more about the wheels and tires?

How much did you spend on the camper rebuild?

Is there anything else you’d like to tell us about the truck and camper? What are you future plans for it?

Kelly Lund: All of the real craftsmanship of the camper was done by a company called Featherbuilt. The owner, Patrick Beseda, is an experienced van builder and took this project on as his first camper build, and did an I’d expect to see more from them in the future, and they could be a great resource for anyone looking for an experienced company to do a camper renovation.

As far as future plans, I’d like to re-gear the truck to compensate for the larger tires and weight. Install a Ham radio that I already have. I have a C4 Fabrication front bumper coming and then install that along with a 12,000-pound Come Up winch I have and probably a few Baja Designs lights. I’ve also been tossing around the idea of installing an air compressor for tires. Lastly, we’d like to put some sort of graphic on it, we just haven’t figured out what yet. 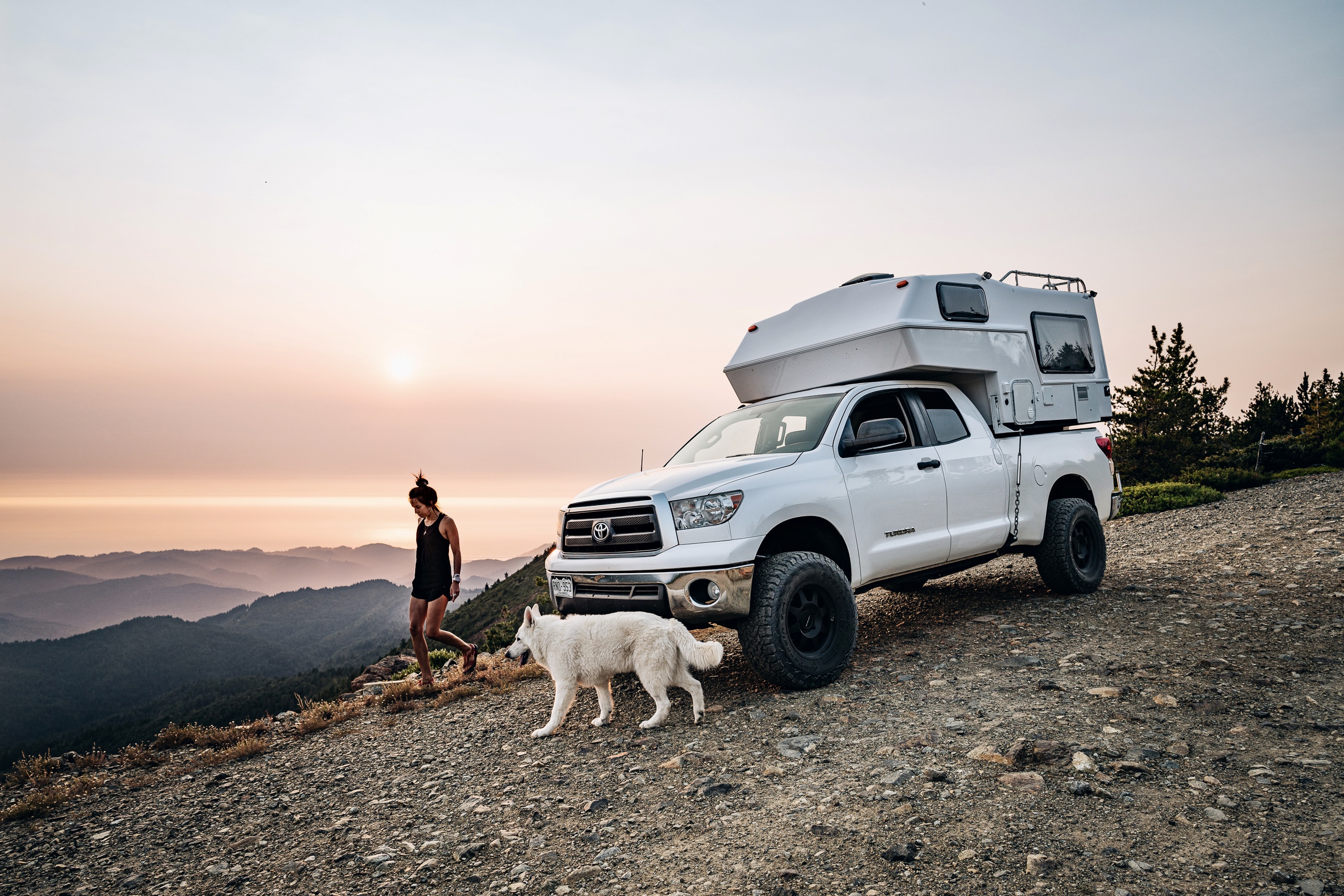 In the Spotlight: The New EarthCruiser EXD Expedition Camper

Oregon-based EarthCruiser has been on a tear lately with several new offerings. Last year the company released its first slide-in truck camper called the GZL, a high-end, pop-up for mid-size and full-size trucks, and this [read more]

Full-Timing in a Bigfoot Truck Camper

Interested in full-timing in a truck camper to save money and see the world? More and more people are doing it. Most of today’s full-timers are baby boomers, but more and more millennials, with increasing [read more]