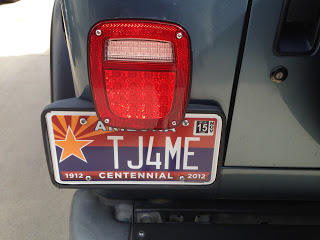 Tail lights are meant to be seen and my Jeep Wrangler’s lackluster, 17-year-old OEM tail lights were barely cutting it. Without a doubt, this was an upgrade that was needed not only for looks, but also for safety. To me, a pair of aftermarket Light Emitting Diode (LED) lights was the only way to go. They’re brighter, last longer, require less amperage, and look better than the old incandescent style light bulbs.

Choosing to go with LED’s was easy, choosing which style of tail light to go with was much more difficult. I really like the classic round look found on the older CJ’s (the Maxxima tail lights are a good example), but going this route also means you loose the side view lights and the license plate illumination light found in the OEM style of light. Cutting into my TJ didn’t appeal to me either, so I elected to stay with the OEM look. After looking at several aftermarket offerings, I decided to purchase a set of Quadratec’s LED Tail Lights.

As expected, the two Quadratec LED tail lights were pretty easy to install. Each light comes with an electrical fitting that quickly connects to the existing factory wiring harness. No splicing of wires is necessary. Not only that, but the installation kit also includes a new signal flasher module that makes the lower resistance turn signal lights flash at the correct rate. To install each tail light, all you need to do is remove the old light fixture with a 1/4 inch socket, disconnect the wiring harness, connect the new LED light to your Jeep’s wiring harness, and mount the new LED light to your Jeep using the existing hardware. Each light took about 30 minutes to install. Removing and installing the signal flasher took an additional 20 minutes.

The Quadratec LED tail lights retain the full functionality of the OEM lights. They feature backup, turn signal, and brake lights. They also feature full running lights on the rear and sides for maximum safety as well as a license plate illumination light on the driver’s side to comply with state visibility laws. Overall, I’m very happy with the purchase. The Quadratec LED tail lights are a bit spendy, but I learned long ago you usually get what you pay for. What you get with the Quadratec lights is a well-constructed, high quality, OEM style of tail light that works great and really brightens the appearance (pun intended) and look of my Jeep.

“Rig for Red!” A Simple Red Light Mod For Your RV Truck Camper

Are you a stargazer or a night photographer looking for a way to get around in your truck camper without ruining your night vision? Perhaps you’re looking for a good night-light or maybe you’re someone [read more]

Whether you’re at home or camping in your RV, lighting is one amenity we often take for granted. Indeed, take it away for just one hour and it can turn your world completely upside down. [read more]

With the recent purchase of a 1998 Jeep Wrangler, swapping out the old OEM components that are prone to wearing out from age and use like shocks, fan belts, and hoses will be important. A [read more]