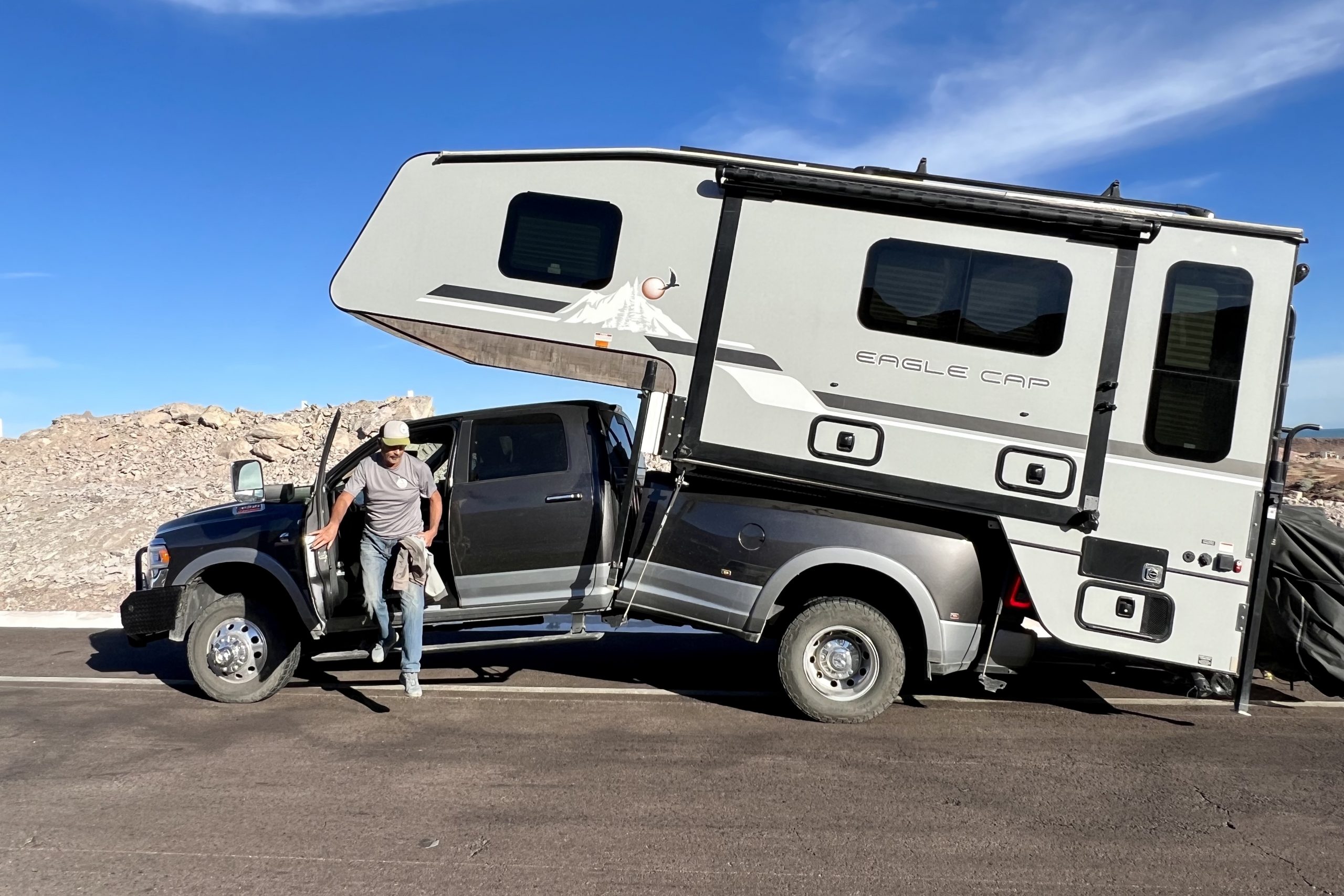 Michael Pavel, the proud owner of 2020 Ram 3500 dually and 2020 Eagle Cap 1165, was exploring Mexico’s Baja with his wife, when they noticed a loud, “creaking sound” coming from underneath the truck. According to thedrive.com, Pavel inspected the shocks and springs, but didn’t see anything out of the ordinary, so the couple pressed on to their next destination. It wasn’t until several days later, near the small village of Puertecitos, that the actual problem manifested itself in the form of catastrophic breaks to the truck’s frame, damage that would cost a staggering $17,000 to repair. According to Pavel, Ram won’t warranty the repair because they believe that Pavel was at fault by overloading his truck.

How did Pavel get in this predicament? At the dealership, he explained that he needed a truck that could haul a 4,900-pound camper. Because he would be hauling full water tanks, food, bicycles, and other gear, he was well aware that he needed a truck with a payload rating in excess of the 4,900-pound figure. But with an advertised payload of 7,680 pounds for a Ram 3500 dually, he believed he would be okay and for two years and 25,000 miles he was.

Unfortunately for Pavel, neither of the above weights are accurate. For marketing purposes, manufacturers tout the “maximum payload” of their trucks in big, bold print, but that number is always accompanied by a footnote, which mandates a configuration that is rarely used by truck camper owners—in Ram’s case, a Ram 3500 DRW regular cab truck with a 6.4L HEMI V8 gasoline engine, 2WD, and an 8-foot bed. The same goes for the camper’s weight with only the dry weight usually listed. For a gargantuan, triple-slide camper like the Eagle Cap 1165, the actual, fully-loaded weight can range anywhere between 1,500 and 2,000 pounds more than the listed dry weight figure.

This disaster, of course, could have been avoided by simply looking at the Tire and Loading “Payload” Sticker on the door jamb of his truck, where the actual payload rating for his truck could be found. We’ve written about the subject countless times and even included the mistake in a popular truck camper article. Unfortunately, a good number of dealerships are either ignorant of the Tire and Loading Sticker, or overinflate the real number in order to make a sale. We aren’t sure what happened in Pavel’s case, but a quick look at a recent Ram 3500 Payload Chart shows a maximum payload rating of 7,680 pounds with a 14,000-pound GVWR and 2WD. Mike’s slightly older Ram 3500, however, is configured completely different and features a Cummins 6.7L turbo diesel with a crew cab, and 4WD. The aforementioned chart shows a maximum payload rating between 5,080 and 5,850 pounds for this configuration. The variance in the two numbers is due to options. 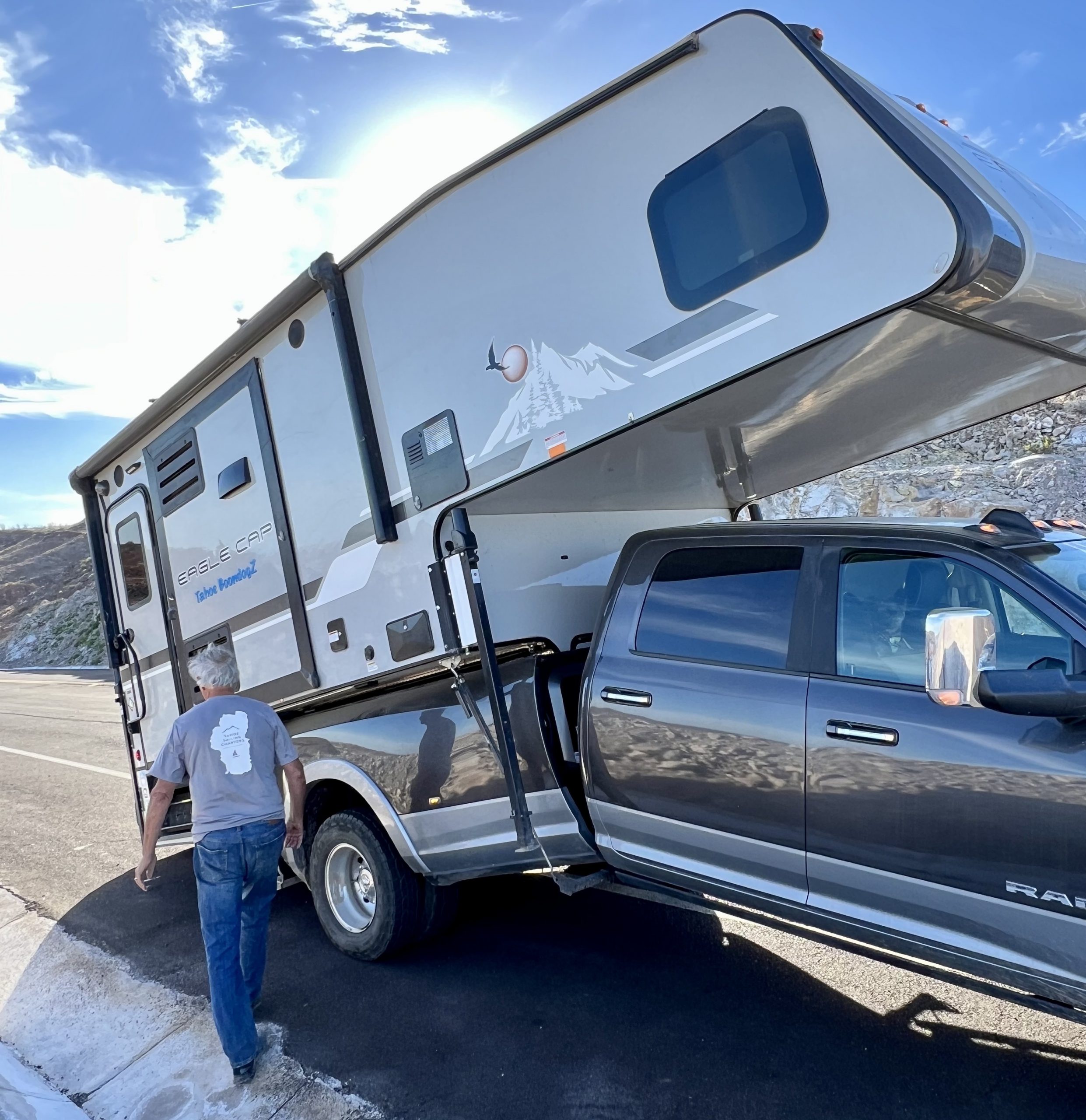 We don’t know how Pavel’s Ram 3500 was optioned out, but we can say that even a 5,800-pound payload isn’t high enough to haul the Eagle Cap 1165—judging from the severity of the damage, we suspect the actual payload rating is more like 5,100 pounds [Ed. note: Pavel confirmed after this story was published that the payload listed on his Tire and Loading Sticker is indeed only 5,178 pounds]. Yes, the dry weight of the Eagle Cap 1165 is 4,917 pounds, but a fully loaded camper of this size easily weighs 6,500 pounds with full holding tanks, batteries, food, and clothing and probably topped out at over 7,000 pounds with passengers, two fat tire bicycles at 72 pounds each, and gear. The only way to really tell is by visiting a CAT Scale. We always recommend taking your rig to a certified scale. Most people are shocked when they do, because most rigs are overweight.

Another factor, which appears to be in play, is how Pavel’s Ram 3500 was loaded. The Eagle Cap 1165 is a BIG camper with a massive overhang. He was also hauling two bicycles on a rear bicycle carrier. All of this weight behind the rear axle does two things. First, it takes weight off of the front axle, creating “driveability” issues with steering and braking. Second, tension is created in the center of the frame. Combined with the weight from the 1,100-pound diesel engine and a 300 pound aftermarket front bumper, this fulcrum affect created a “bowing” affect in the center of the frame, exactly where Pavel’s Ram 3500 frame failed. Couple this stress with an overloaded frame and rough roads and you have a recipe for disaster.

Exceeding the payload rating is probably the most common error made by truck camper owners. The payload rating tells you the maximum amount of weight that a truck can safely haul, in terms of passengers, cargo and gear. The rating is determined by subtracting the truck’s curb weight from the truck’s GVWR. For example, the GVWR of our 2013 Ram 3500 4WD truck is 11,700 pounds. Subtracting the 7,891-pound curb weight of the truck from this figure nets a figure of 3,809 pounds. This is the official payload rating of our truck. This rating, which is expressed in both kilograms and pounds, can be found on the Tire and Loading Sticker and is preceded by the statement, “the combined weight of occupants and cargo should never exceed…” Unfortunately, the payload rating cannot be raised officially by the owner, though there are several upgrades to the suspension that you can make to improve the ride of your rig.

When ordering a truck, options can either make or break it when it comes to payload. First, the diesel option should be “weighed” carefully. Do you really need it? Yes, having a diesel engine is great for climbing mountains and raising your testosterone, but it’s also heavier, nearly twice as much as a gasoline V8 (the 6.7L Cummins turbo diesel at 1,060 pounds outweighs the 6.4L V8 HEMI by 490 pounds). This means less payload for you (not to mention more emission hassles). Ditto for 4WD. That feature, while great for driving on rough roads, sand, and snow, isn’t so great for your payload rating—300 to 400 pounds extra over 2WD is typical. The same applies to the cab size. A crew cab or mega cab outweighs a standard cab by around 600 pounds, so weigh your options carefully before you buy. The lone exception to the “more options is bad for payload” rule is the dual rear wheel (DRW) truck. When it comes to payload, the dually is king and it isn’t even close.

In order to accurately assess where you stand when it comes to your rig’s overall weight, we recommend a visit to the nearest Certified Automated Truck (CAT) Scale. The cost is only $13.50. The CAT Scale printout will provide three weights: the front and rear axle weights plus the total weight of your rig. You should take your truck to the scale first without the camper, then have your truck and camper weighed together later to determine the actual weight of each. Be mindful to duplicate important fluid levels like fresh water and diesel/gas when obtaining these numbers. That way, you’ll get an accurate picture where you stand with respect to not only the GVWR, but also to the front and rear axles of your truck. You’ll be glad you did it.

If you are a regular reader of Truck Camper Adventure you already know where we stand on this issue. Staying below the payload rating of your truck is important. Surprisingly, we still get push back from some readers who argue that the payload can be “raised” by simply getting better-rated wheels and tires. As long as the axles, wheels, and tires can handle the extra weight, they argue, you’ll be okay. This latest incident proves that this is simply not true. The frame plays a major role in the payload calculation too. Yes, getting higher-rated wheels and tires can improve your safety margin to a degree, but other components on the truck—like the frame—are rated to handle the GVWR/payload and that’s about it—the lone exception to this rule is the 3/4-ton truck that often uses the same frame as one-ton truck models.

So what truck would we have recommended to haul Pavel’s monstrous, hotel on wheels? Either a class 4 or class 5 truck. In Pavel’s case either a Ram 4500 chassis (7,850 pound payload) or a Ram 5500 chassis (10,700-pound payload) outfitted with custom truck bed with extra storage. Either truck would’ve prevented this disaster from occurring.

Check-out our follow-up story on how Michael Pavel and his wife got back home, the results of their insurance claim, and the couple’s plans for the future. 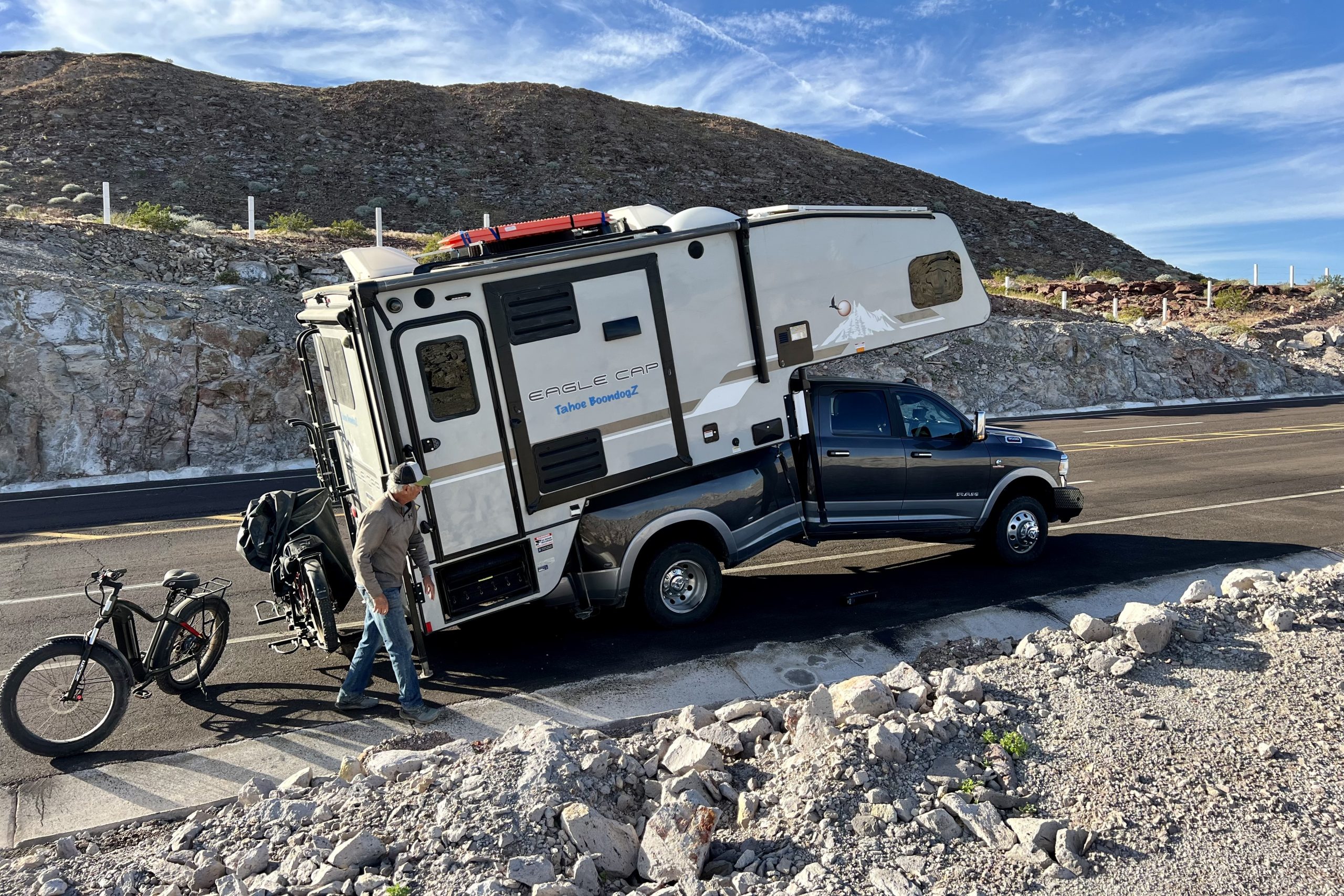 Truck Camper Adventure is proud to present another truck camper review written by a guest author. In this insightful and informative piece, Joseph Reeves provides us with a Review of the Capri Retreat truck camper, [read more]

Time sure flies. Its been 12 years since Ram re-reintroduced the Power Wagon, the company’s purpose-built, 3/4-ton off-road pickup, to the public. The truck enjoyed an uninterrupted run in popularity from 1946 to 1981, when [read more]

Truck Camper Adventure is proud to present this updated Truck Camper Buyer’s Guide. Despite the claims of some that the slide-in truck camper is dying breed of RV, there’s strong evidence that it isn’t. Most [read more]