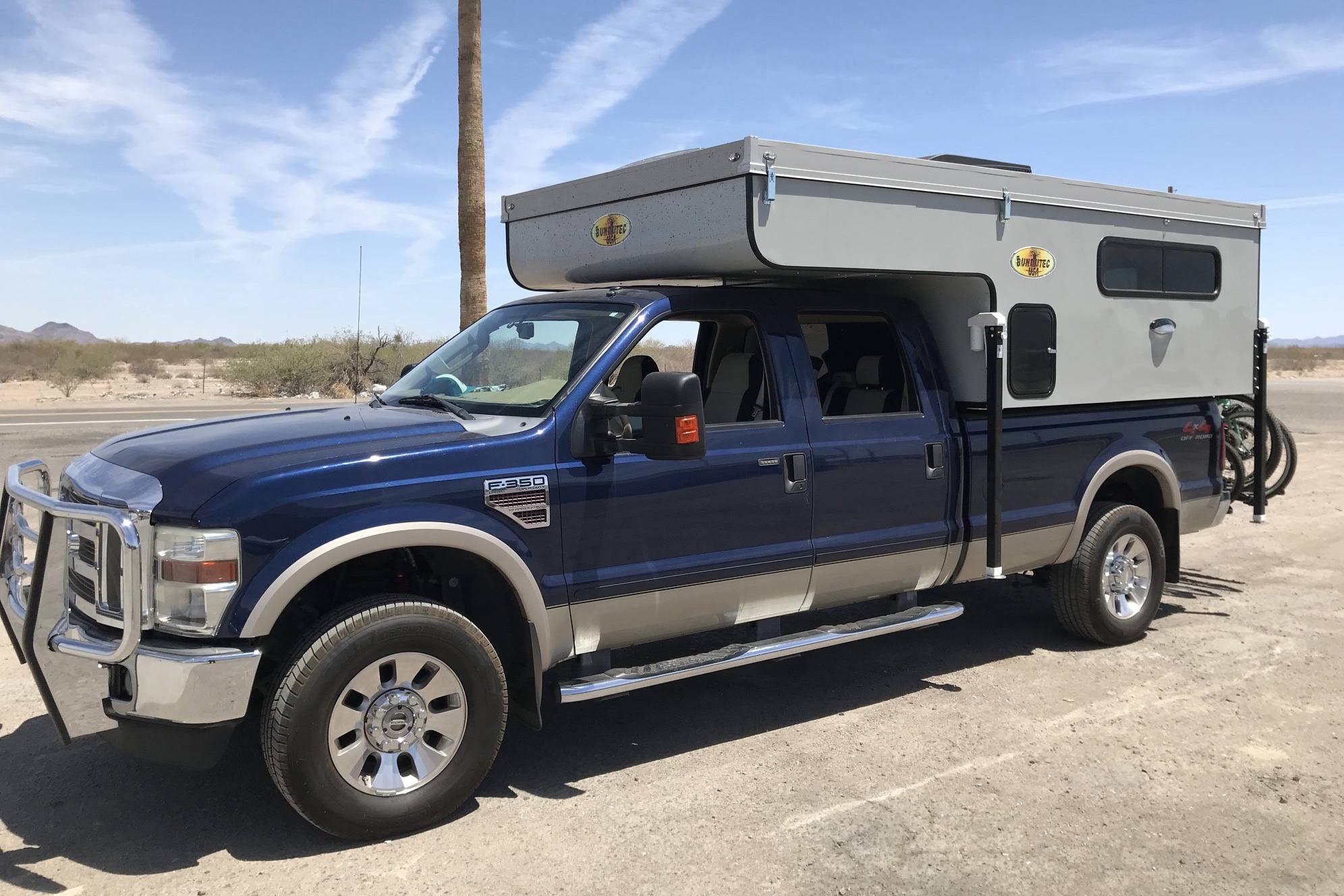 When it comes to camping, my wife and three boys have just about done it all. We’ve had a travel trailer and a Class C RV. We’ve owned and used several different types of tents and various sleeping arrangements. Nothing seemed to feel right. My friends were getting into the Roof Top Tent craze, but the thought of hauling three young boys up and down a ladder seemed daunting at best. During my quest for the “Perfect RV,” I kept hearing from people of the fond memories they had in a truck camper. I became intrigued and the search began.

BundutecUSA popped up on my radar during an internet search for “overland truck campers.” What attracted me initially was the base price and the included features (the base model sells for only $19,800). What Bundutec considers standard other companies charge as extras. The affordability also gives us room to add additional options like a Truma Combi Water Heater Furnace. This option alone is worth it’s weight in gold.

Prior to deciding what we were going to purchase, I researched several options online. We also went to a few dealerships with varying manufacturers to see if there’s anything out there we would like. Like a scene out of Goldilocks, some of the campers we saw were too big, some were too small, and some never seemed just right. I remember coming across BundutecUSA and thinking, “hmmm, that might be an option.” Like buying a pair of pants online, however, not having the ability to see one in person was worrying. After hours of obsessing over details and several emails to Jenn Crooks (Bundutec USA Ambassador  Extraordinaire), we believed this camper would be “just right” for us.

The relationship with Jenn and Rory at BundutecUSA began eight months before the 2018 Overland Expo West with the goal of taking delivery at the Expo. Not only was it ready as promised, they went out of their way during the process to make sure every question, idea or thought was answered. Jenn and Rory are truly customer satisfaction oriented. An example of this was a minor repair was needed six months into our use. Not only did the design of the camper make the repair super simple, but Rory insisted that he pay for the $10 part that needed replacing. 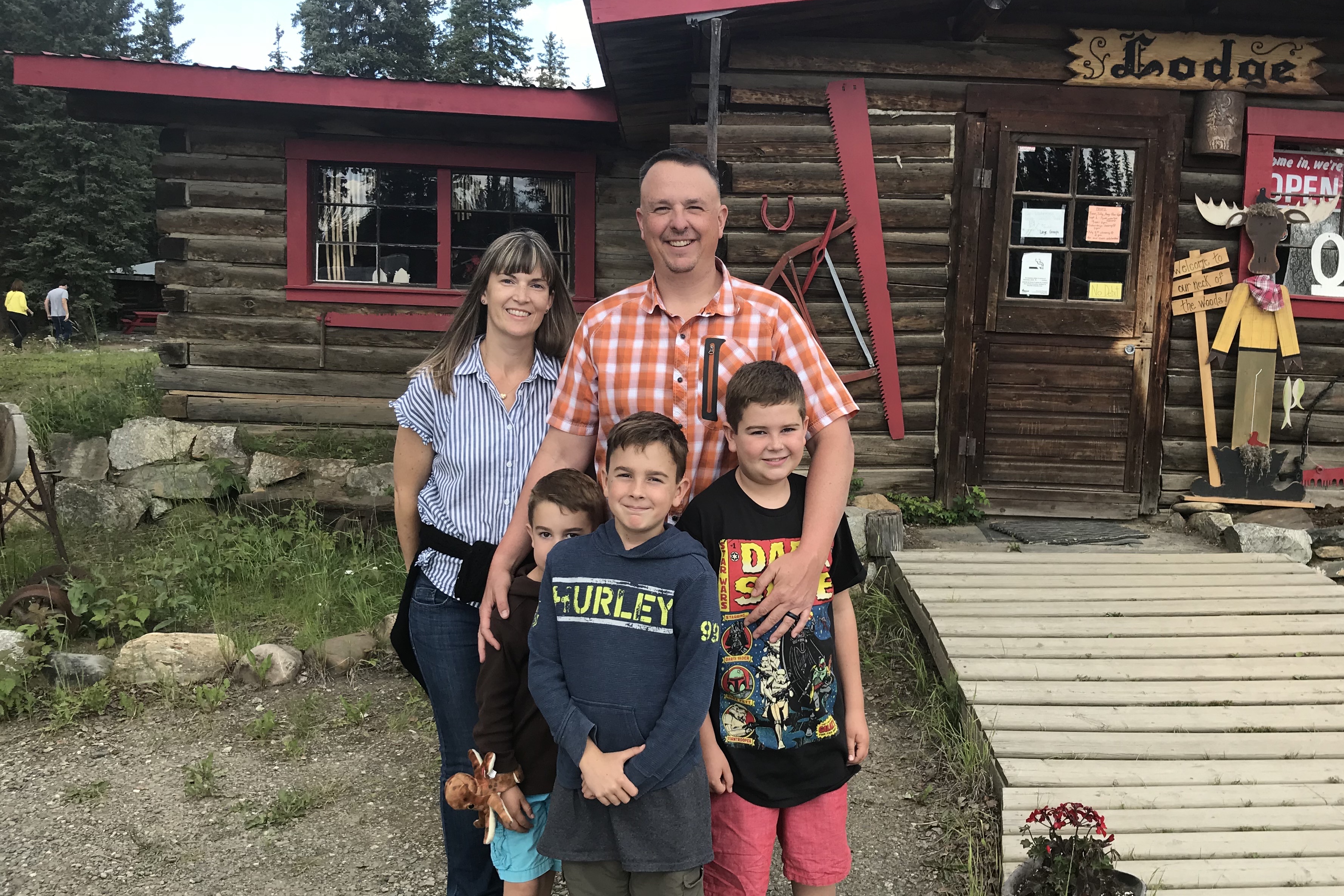 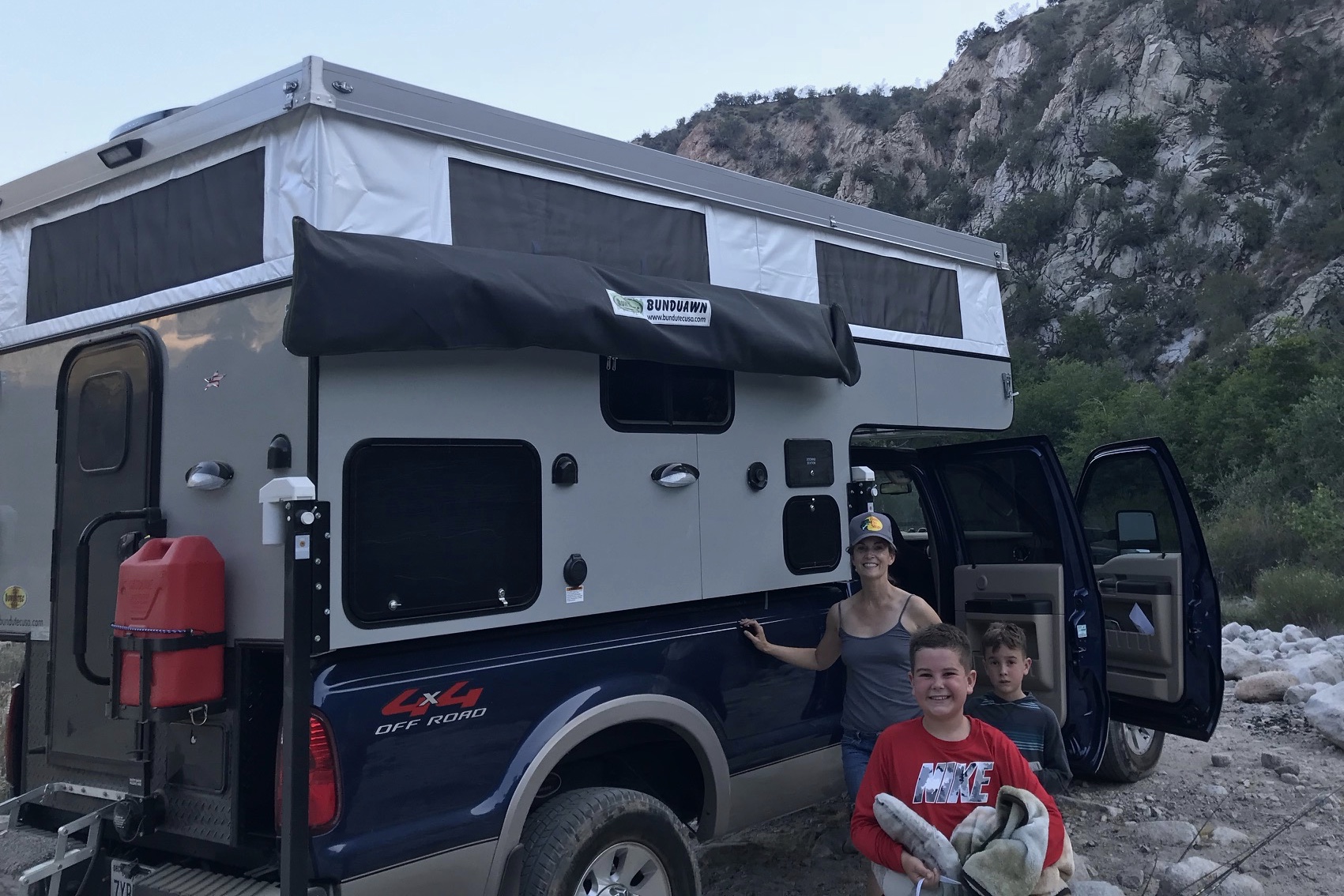 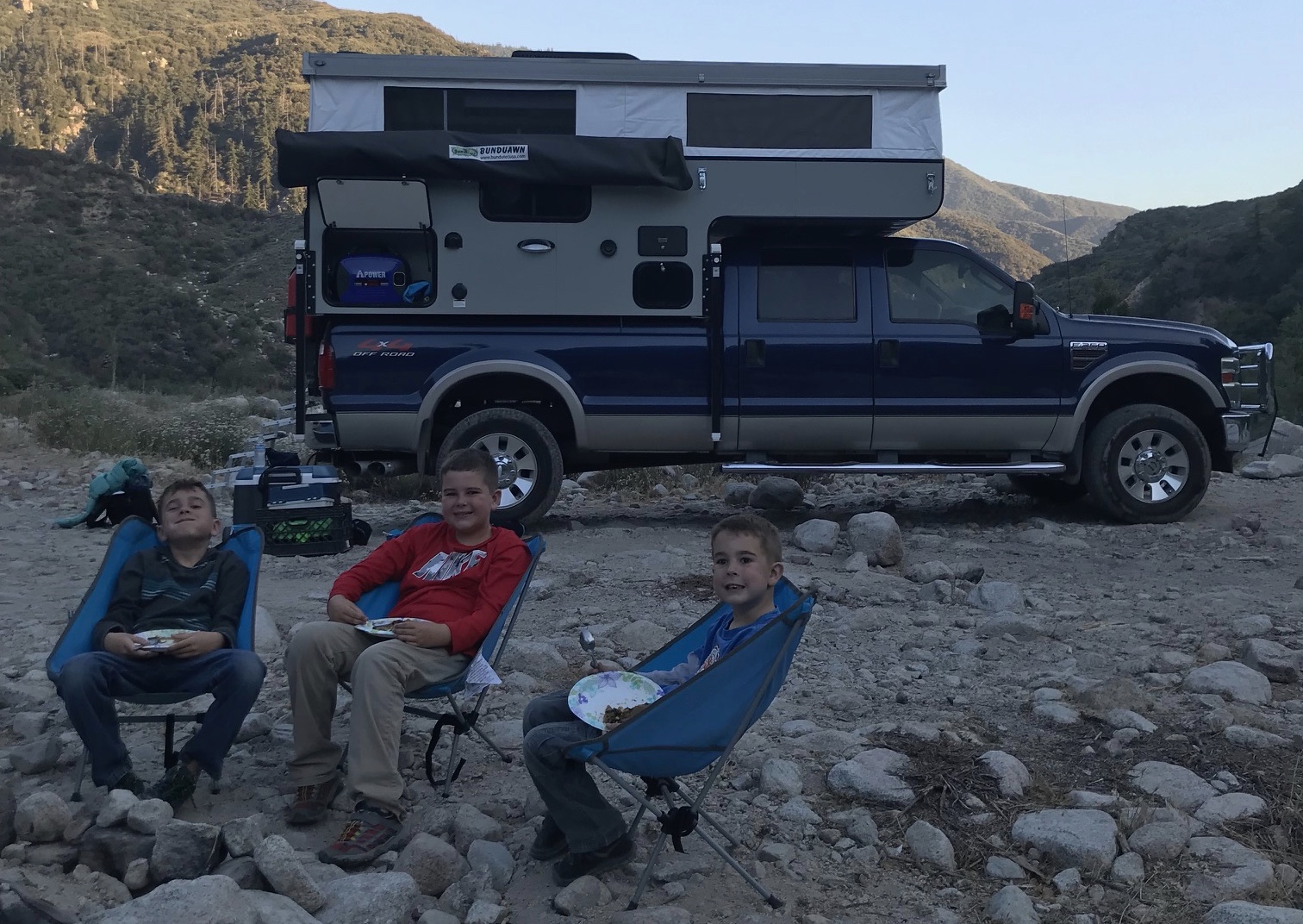 For the past eight months, we’ve gone on six camping trips. The camper is everything we wanted and then some. The Zamp Solar keeps us powered up with ease. The Truma Combi water heater-furnace is nearly silent during operation and the memory foam mattress is the most comfortable bed we’ve been in while camping. The custom floor plan we have has a couch/bed conversion with a bunk above that. Our young boys occupy those spots. We have the queen above the cab. It works for us, but we’re really only inside to sleep.

One of the things that drew me to Bundutec was the ability to customize. I wanted to make sure our family of five had what we needed to be off grid for a few days. The fresh water tank in the Free is 32 gallons, grey tank is 25 gallons and the black tank is a 5 gallon cassette toilet. The toilet is great because it’s not permanently installed. We set up a shelter outside so we have use of the full shower (not a wet bath). The cassette toilet can be emptied into a toilet so stopping at a dump station is not necessary. The grey water becomes recycled water for our trees at home.

The Zamp Solar is a 100 watt system with the Zamp 30 amp controller. As long as there is sun, we have power. The AGM Deep Cycle keeps us powered at night. There are multiple USB charging ports throughout the interior as well as 12 volt receptacles. I love the Nova Kool fridge. It’s 12 volt so I’m not as concerned about leveling and propane. We opted for the flush mount sink and stove top. We don’t really use those, but they’re great to have.

The small details is what separates BundutecUSA from the others. Things like the skylight above the bed, easily accessible technical parts for ease of repair/replacement, LED Lights, durable finishes and marine-style cabinet latches make the camper very user-friendly. As far as I’m aware, the Free is the only Bundutec camper with a bunk. My first customization request was making sure my three boys had somewhere to sleep. Rory made that happen with the bunk above the couch. 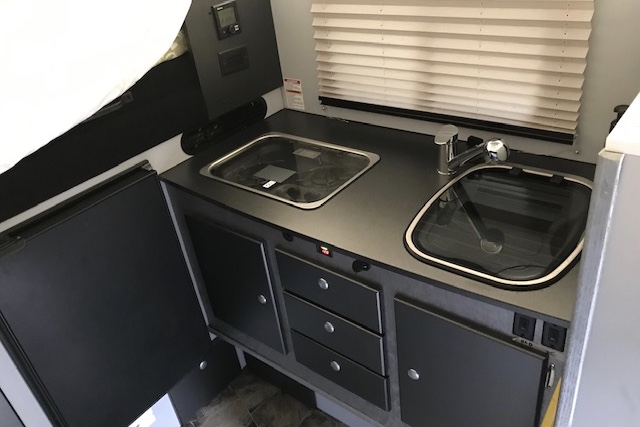 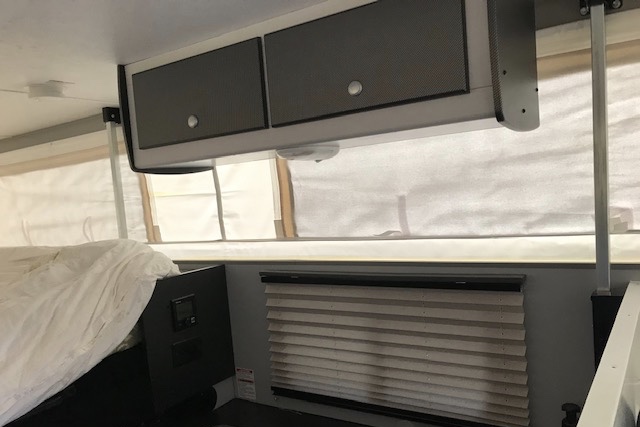 If someone was looking to purchase a BundutecUSA camper, I would highly recommend getting the solar power system, the roof mounted AC, and the Truma Combi. The Truma Combi is the quietest and most efficient water heater and furnace I’ve ever used in an RV. It’s expensive, but definitely worth it.

Our Bundutec Free is mounted on a 2008 Ford F-350 4×4 with the 6.4L Powerstroke diesel engine. While driving I barely notice it. The unit weighs about 1,900 pounds and with the assistance of rear airbags and the collapsed roof, we can drive in Southern California with relative ease. I worked with Rory to find a reliable and affordable tie down system. I purchased turnbuckles and quick links rated to a weight far more than the camper. Those attach to forged eye bolts I installed in the truck bed. This system was less than $100 and, it may not be the easiest way to do it, yet it certainly has worked for us.

I have owned the camper for about eight months and I can truly say I would recommend it to my friends and family. The only cons I can think of are true for any truck camper. When we carry our bikes on the hitch bike rack, we have to take the bikes off the rack in order to get inside the camper. And we still haven’t figured out a way to take our dogs.

The best review I can give for the Bundutec Free comes from my ever so reluctant wife. She was very skeptical about what I had gotten us into. Now, she’s said it’s the best and most comfortable camping arrangement we’ve ever had. We will be using this camper for our family adventures for years to come. 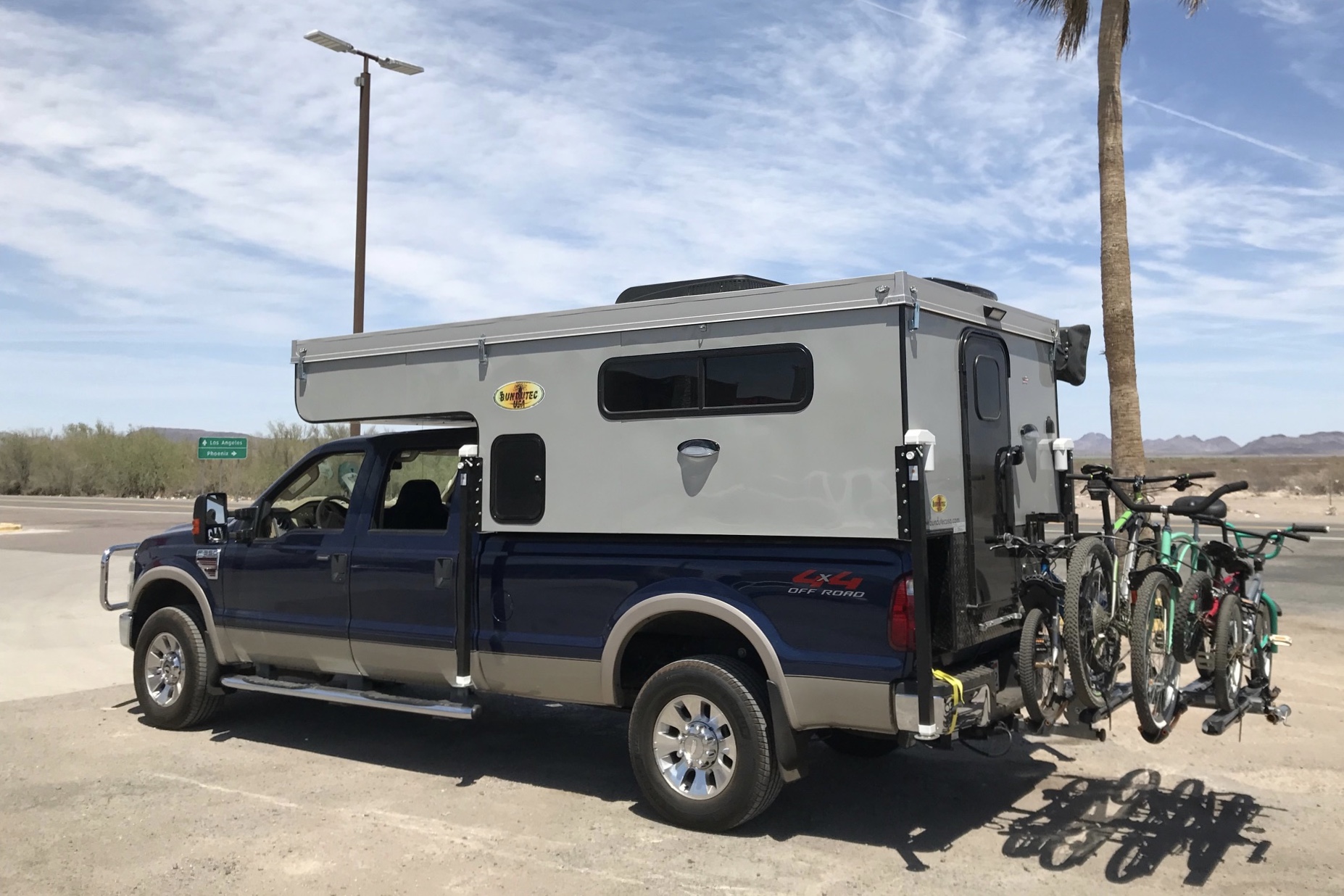 About Michael Casavan 1 Article
Mike Casavan is a USMC Veteran and lives in Southern California with his beautiful wife and three awesome sons. When Mike isn’t camping, fishing or hiking with his family, he serves as a Law Enforcement Officer for a Southern California destination city.

Each May, thousands of outdoor and overland enthusiasts gather in Flagstaff, Arizona for the Overland Expo WEST. The event, which showcases hundreds of overland vehicles and products as well as an impressive schedule of workshops [read more]

Truck Camper Trumps Other Types of RVs Including Vans

This was Truck Camper Adventure’s first time covering the Overland Expo Mountain West and the 1,800-mile round trip from Kingman, Arizona to Loveland, Colorado was well worth it. We camped in the “Weekend Pass” camping [read more]