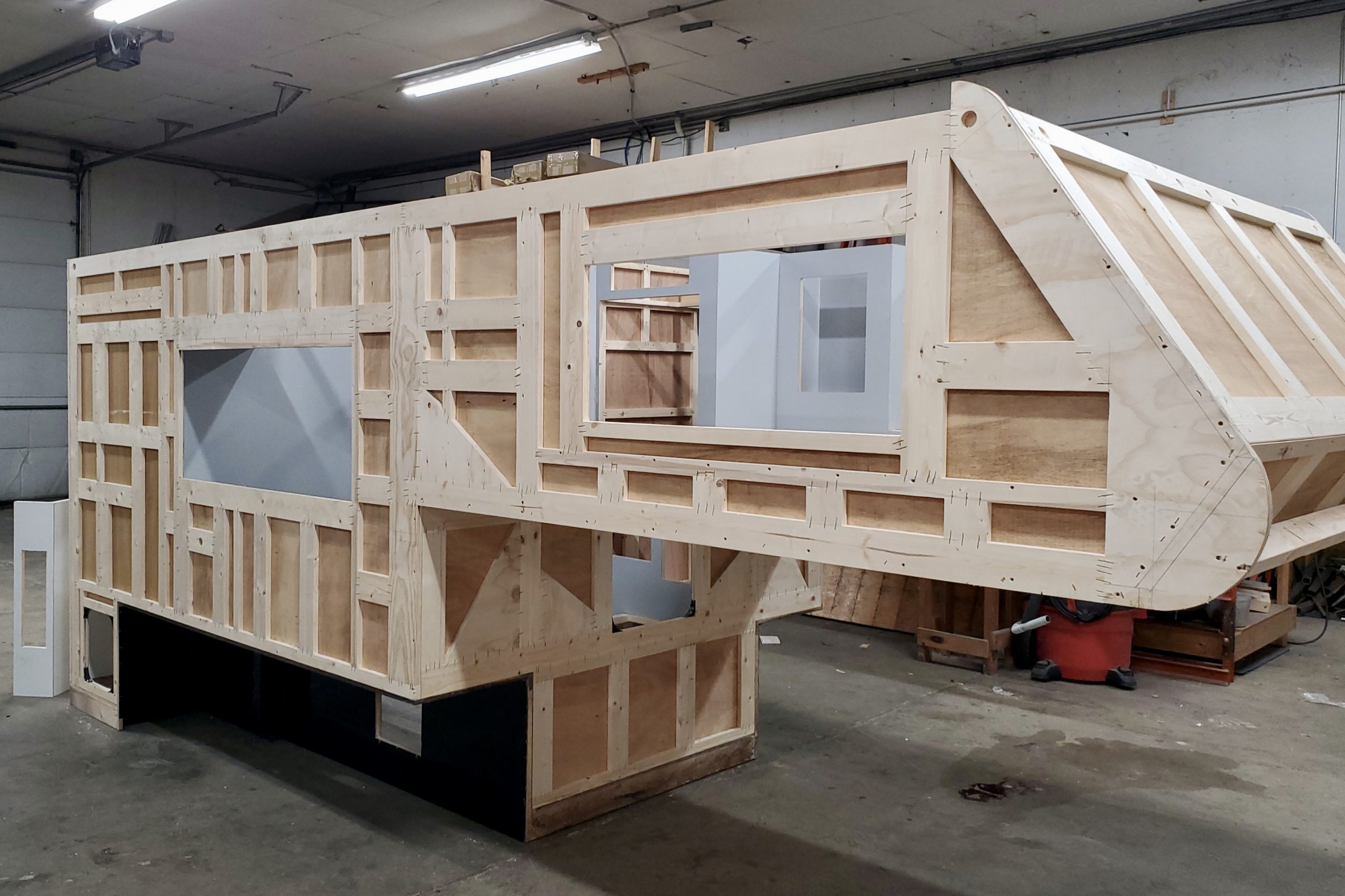 Progress is being made on our new Bundutec Roadrunner. Offering the latest technology, this custom, all-new camper will feature the same general layout as our old Northstar Laredo SC truck camper, yet will offer several improvements and enhancements. The Roadrunner’s 8-foot 7-inch long floorplan will have a wider wet-bath with a Thetford cassette toilet, the Truma Combi water heater-furnace, a Tern Overland 500x700mm roof hatch (same size as a Heki), a taller cabover ceiling, and a True Induction dual cooktop. The black-on-gray exterior of the Roadrunner will look vastly better than the vanilla-white exterior used by most truck camper companies.

The Roadrunner will incorporate several modifications and features found in our old Laredo, including a Dometic CR1110 3.7 cubic foot DC compressor refrigerator—an absolute must for boondocking—a 240 amp hour lithium battery bank, a 3,000 watt inverter with a built-in transfer relay, and a Zamp 440 watt solar power system. Construction will feature an insulated, all-wood frame with glued and screwed joints overlayed with an attractive gray fiberglass tastefully accented with black hatches and windows. Unlike the Laredo, however, the Roadrunner will feature a flat roof, which will create more overhead space in the cabover, something the wife never liked about the Laredo.

The Roadrunner exemplifies the custom work for which Rory Willett at BundutecUSA is known. We are excited about finally getting the Truma Combi and look forward to having a larger bathroom as well. The Laredo bathroom is only 30 inches wide, the Roadrunner bathroom will be 36 inches wide. Six inches probably doesn’t sound like much of a difference, but believe us, it is. The camper will also feature a Tern Overland roof hatch in the cabover for egress and viewing the stars (if you’ve read our review of the Heki Vent you’ll know why we are making the change). More importantly, the interior of the Roadrunner will look so much better. We were never a fan of the dated, 1990’s oak used in our 2016 Northstar Laredo SC.

The Northstar Laredo SC will always be near and dear to our hearts, it served us well as evidenced by all of our trips, but it’s time to move on to something even better using the same floorplan. We are excited to see what improvements Rory will build into this old classic and we’ve already noted a couple in the photographs. Some of his most visible improvements relate to storage. There’s so much more of it, high and low, including a dirty clothes hamper in the bathroom. Another important improvement relates to insulation, there’s more of that too—everywhere. Even the refrigerator compartment has been insulated with block foam insulation! Of course, having a wider bathroom means having a smaller dinette, but that’s a trade-off we’re willing to make as empty-nesters.

Of all of the features included in the Roadrunner, we are most excited about getting the Truma Combi Eco Plus. Being a dual water heater-furnace, this German-engineered appliance takes up half the space since only one appliance is needed rather than two. This also means you’ll save on weight—the Truma Combi weighs only 31 pounds, a savings of 24 pounds. The amp draw of the whisper-quiet unit is quite low, too, with an average power consumption of only 1.1 amps for air heating and 0.4 amps during the water up heat cycle. The Truma Combi Eco Plus can operate on either propane or 110 volts AC, giving us greater flexibility on how we use it. Due to its space saving and weight saving features, more and more RV manufacturers are using the Truma Combi in their RVs.

Pricing for the Roadrunner is still in a state of flux, but Jenn at Bundutec has told me pricing will be around $26,000, a bargain no matter how you slice it and dice it. Stay tuned for updates here and on the Truck Camper Adventure Instagram account as the Roadrunner is being built. We expect to pick the camper up in early July, but there may be a slight delay due to parts shortages that have resulted from the COVID-19 pandemic. Fortunately, Rory is doing his best to manage this issue using all of the sources he has at his disposal to keep the BundtuecUSA truck camper pipeline flowing. 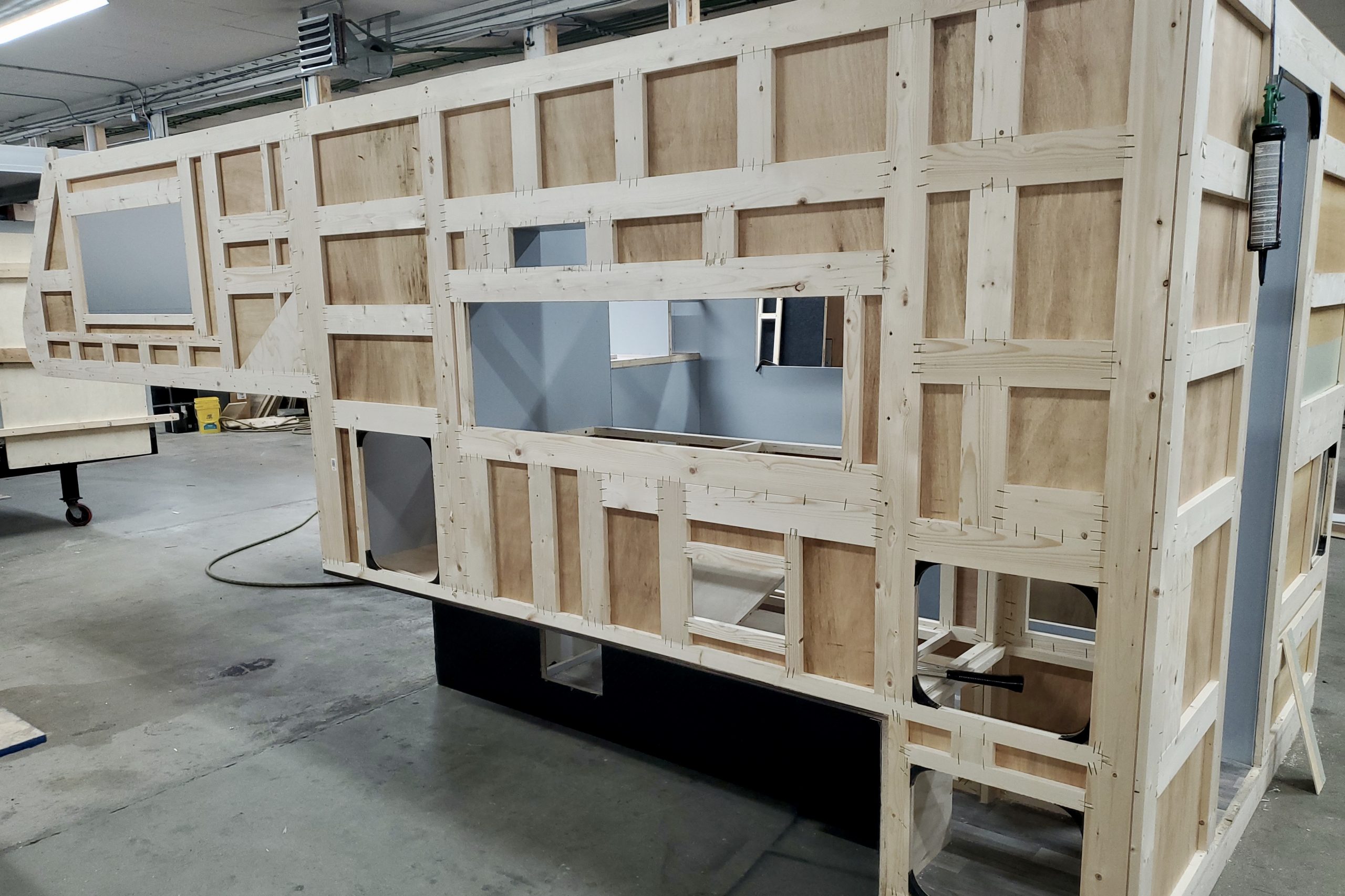 It was a sad day Monday as we transported “Wolfy” to the home of its new owners. This couple will be vacationing in it in Canada for a month or so and really liked that [read more]