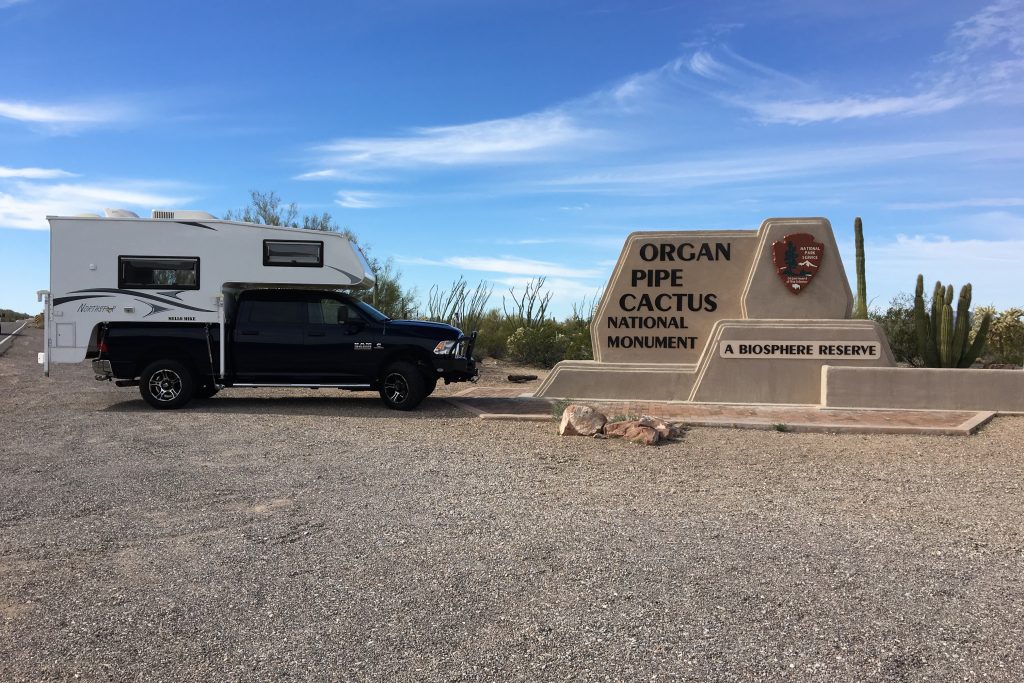 Arizona’s Organ Pipe Cactus National Monument has a checkered history. After its creation in 1937 by President Franklin D. Roosevelt, the national monument was known as one of the prettiest parks with some of the most spectacular nature drives in the United States. Visitation numbers each year were impressive for such a remote park. All of that changed in the late ’90s, however, when smuggling and drug cartels made the monument’s 517 square miles a dangerous place to visit. The death of Park Ranger Kris Eggle on Aug. 9, 2002 in a shootout with drug runners, prompted the closure of most of the park. This changed on Sept. 15, 2014 when the entire park was reopened again. A vehicle barrier on the border in addition to a much increased presence by the U.S. Border Patrol and Park Rangers have made things safe again for hikers, birders, and nature lovers looking to enjoy this Sonoran Desert paradise.

The Organ Pipe Cactus National Monument offers stunning scenery. Mount Ajo, on the eastern boundary, stands at 4,808 feet, the highest elevation in the park. Other mountain ranges, include the Puerto Blanco Mountains and Sonoyta Mountains in the south central part of the monument and the Bates Mountains in the northwest. Two major plant communities, the Lower Colorado Valley and the Arizona Upland, are represented in the park. The Lower Colorado Valley is perhaps the hottest and driest climate in the country with summer temperatures often in excess of 115F degrees. You won’t find much variety of plant life there, mostly scrub and saltbush. In the higher, wetter elevations of the Arizona Upland can be found hearty cacti like the Saguaro, Organ Pipe, Prickly Pear, and Cholla. In the highest elevations of the Ajo Range, Juniper, Agave, and Rosewood can even be found. Admission to the park is $12.00 per vehicle.

Organ Pipe Cactus National Monument is more than just a great place to explore, relax, and enjoy the scenery, it also plays a significant role is science and preservation. In 1976, the monument was designated an International Biosphere Reserve by the United Nationals Education, Scientific and Cultural Organization (UNESCO), and in 2001 the Quitobaquito Springs with the monument was declared a Globally Important Bird Area by the American Bird Conservancy. Most of Organ Pipe Cactus National Monument is also a designated wilderness area, but unlike most wilderness areas in the United States, you’re allowed to drive in the park. That’s a good thing for overlanders and explorers, because the Ajo Mountain and Puerto Blanco Drives are among the best drives in the Sonoran Desert. Period! 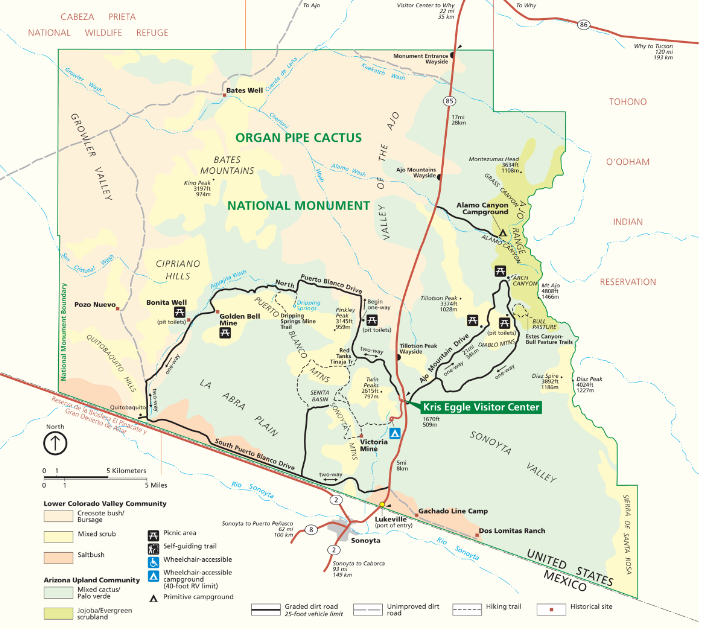 For the overlander, two fantastic, scenic drives can be found in the park. At 41 miles, the Puerto Blanco Drive is the longest and the most varied. With several stops for photos and lunch, we were able to complete the drive in four hours. The Puerto Blanco Drive travels deep into the monument’s unspoiled backcountry through mountain foothills and cactus-covered plains. The drive will take you past old mines, springs, historic sites, and several hiking paths. The drive can be rough in places, but it doesn’t start out that way. The first 5 miles of the drive to the Pinkley Peak viewing area is partially paved and wide enough to accommodate two-way traffic. After Pinkley Peak, the road narrows to a one-way lane that flows counterclockwise. Most tourists turn around at this point, leaving only the most adventurous to complete the circuit.

The Puerto Blanco Drive is best tackled with a high-clearance four-wheel drive vehicle, especially during or immediately after a heavy rain. The reason is due to the numerous washes that cut through the route, including one long stretch on the southwest part of the loop where the road is actually a wash. Parts of the road is rocky, pitted, with heavy washboarding, but overall, it isn’t too bad. I didn’t air down my tires, but in retrospect, I probably should have. The most scenic and enjoyable part of the drive is the stretch between Pinkley Peak and the Bonita Well on the north side of the route. Here, the road skirts the northern edge of the scenic Puerto Blanco Mountains. The entire drive includes four or five picnic areas where you can stop for lunch and stretch your legs. If you decide to tackle this route, make sure you stop at the aforementioned Quitobaquito Springs, a beautiful oasis used by migratory birds.

The 21-mile-long Ajo Mountain Drive is the most popular drive in the monument. The mostly unpaved, one-way loop meanders through the foothills of the Ajo Range and takes about two hours to complete. The scenery is pretty spectacular. Although the road is narrow in places with several sharp turns, the route is fine for a truck camper rig with a high clearance (I passed another truck camper during my time there, an Outfitter Apex Pop-Up). Highlights of the Ajo Mountain Drive include the narrow and winding climb towards Diablo Canyon (this part of the drive is actually paved due to previous wash outs), and the approach to Arch Canyon (the only location within the park the boasts a natural arch). Several numbered pullouts can be found along the route (make sure you get the guidebook at the Kris Eggle Visitor’s Center which explains about these pullouts). The drive also offers three covered picnic areas, including one at the main Diablo Mountain overlook, one at Arch Canyon, and the other at Estes Canyon.

At this point you’re probably wondering about the camping opportunities. Unfortunately, dispersed camping isn’t permitted in the monument, but it is at the Gunsight Wash BLM area just a few miles north of the park. This is a great area to set up camp for the night. When were there the area was well used with over two dozen RV’s boondocked there. Even so, there was plenty of room for more rigs with privacy to spare. Another BLM boondocking area worth checking out is on Darby Wells Road near Ajo, Arizona. This area is prettier, but is further from the monument. If you prefer something closer and more organized, the monument offers two campgrounds with no hookups, Twin Peaks Campground which has 174 sites for RV’s, and the tiny Alamo Campground which has four sites. The website says Alamo Campground is for tents only, but the park rangers told me that small rigs like truck campers and van conversions can stay there with no problem.

Be aware that Organ Pipe National Monument gets a lot of vehicle traffic. Highway 85 cuts through the heart of the park, terminating in the tiny village of Lukeville, the entry point into Mexico. This is the route that most Americans take to visit nearby Rocky Point in Mexico, a popular tourist destination. There are two manned border patrol check points on the highway, including one at the entrance to the park. If you need to fuel up your rig, the best places to do it are in Ajo, a small town north of the monument, and Lukeville where there’s a large gas station. Both places sell diesel.

If you’re looking for a terrific overland opportunity in the southern Arizona with loads of nature, you should really check out Organ Pipe Cactus National Monument. The park’s unspoiled beauty gives you an opportunity to explore and see Arizona how it used to be. I’m ashamed to admit it, last month’s trip was my first time visiting the park. I think the proximity to my home and the fact it was so close meant I could go at any time. I kept putting it off. Fortunately, I corrected this oversight and spent an amazing three days there. If you enjoy the beauty of the Sonoran Desert, too, then you’ll love what Organ Pipe Cactus National Monument has to offer. In my opinion, it’s even better than Saguaro National Park in Tucson. As for the drives, on a scale of 1 to 10 with 1 being the easiest and 10 being the hardest, I’d give the Puerto Blanco Drive a difficulty rating of 2 and the Ajo Mountain Drive a difficulty rating of 1. For the scenery and unspoiled beauty, I’d give both a 10.

No tour of the American west would be complete without a stop at Monument Valley. Few places are more striking, more iconic, and more well known than Monument Valley’s massive red buttes and mesas. Indeed, [read more]

It’s been called the Devil’s Highway and the Way of the Dead, but the El Camino del Diablo has been used for thousands of years by Native Americans, Conquistadors and explorers traveling from Mexico to [read more]

For months my sons, who have been attending Eastern Arizona College, have been telling me what an incredible place Mount Graham is for camping and fishing. The place sounded great, but I kept putting it [read more]