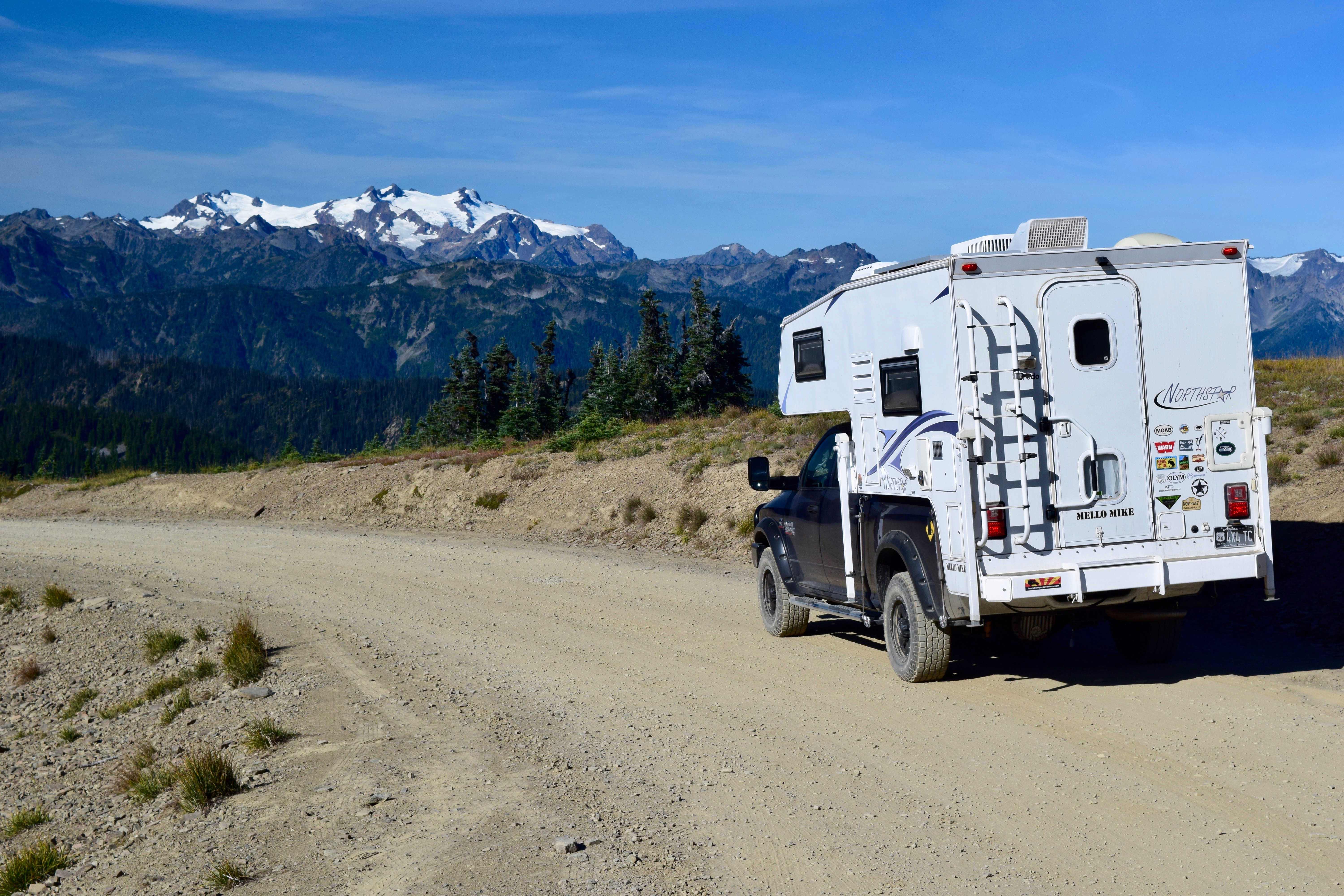 Washington state’s Olympic National Park has long been one of our favorite parks to explore and relax in. While Hurricane Ridge, the Hoh Rainforest, and Rialto Beach get most of the park’s 3 million visitors, we wanted to do something more than just hit the typical tourist hot spots. For truck camper people like us looking for an Adrenaline rush that usually means one thing—get off pavement and explore. Fortunately, Olympic National Park has several dirt roads that you can explore in a truck camper, but the one drive that has a reputation far above the others is a relatively obscure track called Obstruction Point Road, a narrow, 8-mile-long road near the Hurricane Ridge Visitor’s Center.

When we first heard about Obstruction Point Road, it sounded intriguing. A sign posted at the entrance to the mountainous road warns, “road not suitable for trailers and motorhomes.” As truck camper people, warnings like that tend to pique our interest even more. Dangerousroads.com calls it one of Washington state’s most dangerous roads. A recent death on Obstruction Point Road seemed to confirm that fact. We did some research and looked at several videos of the drive before tackling it. Honestly, the videos didn’t look that bad. Not one website or forum, however, had a truck camper tackling the drive. All I could find were photos and videos of Jeeps, trucks, and SUVs, and even some passenger cars and van conversions, but not one truck camper, not even a pop-up. It was time to change that with an excursion in the Truck Camper Adventure Rig.

How Obstruction Point Road got its name is interesting. Constructed in the 1940s, the original plans called for a road to connect Hurricane Ridge with Deer Park Road, another dirt road 7 miles to the east. This plan, however, hit a major snag when the area around Obstruction Point was found to be unsuitable for a road due to loose shale and the instability in the area, hence the name Obstruction Point. Even though the road failed to live up to its original plans, it still provides thrilling vistas, the best views of Mount Olympus by car, and serves as a trail head for several outstanding hikes including those that reach Deer Park, Grand Lake, and Grand Pass. It remains Olympic National Park’s highest elevation road.

Those traveling on Obstruction Point Road should exercise caution as there are no guardrails and some sections of the route are very steep and narrow with steep drops hundreds and thousands of feet down. If you have issues with vertigo you may want to pass on this road. The dirt road rises and falls and has several blind turns so drivers should go slow and exercise caution when negotiating sharp turns. Don’t be deceived by photos and videos of the route that make Obstruction Point Road look like a Sunday drive. Parts of this road are very dangerous and should only be undertaken when conditions and lighting are right. Due to the numerous sharp turns and hazards, we wouldn’t recommend driving this road at night or faster than 15 mph.

Unfortunately, there are no places to officially camp along Obstruction Point Road though you can park overnight at the trail head parking lot at the end of the road. Like most national parks, dispersed camping is not allowed within Olympic National Park. There is no potable water at the trail head parking lot; the only amenity is a pit toilet. Unfortunately, the Obstruction Point parking lot is very small and can accommodate only about 20 vehicles. Most of the time the parking lot is half-full due to overnight hikers, so we recommend getting there early if you want to get a parking spot for the night and take in a hike. The parking lot views at dawn and dusk are worth it.

The first part of the dirt road traces the razor’s edge of a low saddleback with trees on either end so it doesn’t look that bad, but there are few turn outs here due to the terrain. The end of the saddleback also marks the initial climb toward Steeple Rock which is marked by a very steep accent. We put our truck in 4WD here as the surface of the road is a little rough in places with lots of gravel. As you continue to climb toward Obstruction Point you’ll find yourself driving along the side of Hurricane Ridge with steep drop offs on the west, some lined with trees, some bare. This part of the road is only one-lane wide with few pull-outs so pray you don’t meet any oncoming traffic. This part of the drive is also marked by several sharp bends and turns as the road follows the contours of the ridge. Obstruction Point Road then starts another steep accent past Eagle Peak marked by more sharp bends and turns followed by a very steep decent near the Sequim/Mount Baker pullover and overlook. After reaching the top of Hurricane Ridge, the terrain flattens and widens out considerably with terrific views to the south and west. The trail head parking lot marks the end of the drive at mile marker 8.

So can you drive Obstruction Point Road in a truck camper? Obviously you can since we did it, though we wouldn’t recommend doing it in a large truck camper with multiple slide-outs and a dually. This steep and narrow road is best tackled in either a pop-up truck camper or a low-profile hard-side truck camper like ours. Due to the steepness of the road we recommend a 4WD truck, especially if you plan on tackling this drive in wet weather. As for those driving RVs and pulling travel trailers, don’t think about doing it. The warning sign posted at the beginning of the road is right on. Obstruction Point Road is too narrow, too steep, and too rough for motorhomes and trailers. Not only that, there’s no place to park a big rig like these let alone turn around if you happen to make it to the end.

Overall, Obstruction Point Road was a thrilling, two day excursion in the Truck Camper Adventure Rig. Sure, experienced truck camper people may find Obstruction Point Road less challenging due to its short, 8-mile length, yet I think most people tackling this drive will find it both nerve-wracking and exhilarating due to the epic views and challenging terrain. Though the drive is relatively short, its definitely worth doing in a truck camper either as a day trip or as an overnighter. Is it Washington state’s most dangerous road? Probably not, though it probably ranks in the top two or three. I’ve seen videos and photos of a longer, similar drive in the North Cascades called Hart’s Pass Road and that looks worse with straight drops on sheer cliffs with no shoulder whatsoever. We have plans to tackle that drive in the Truck Camper Adventure Rig next summer.

Truck Camper Trumps Other Types of RVs Even Vans