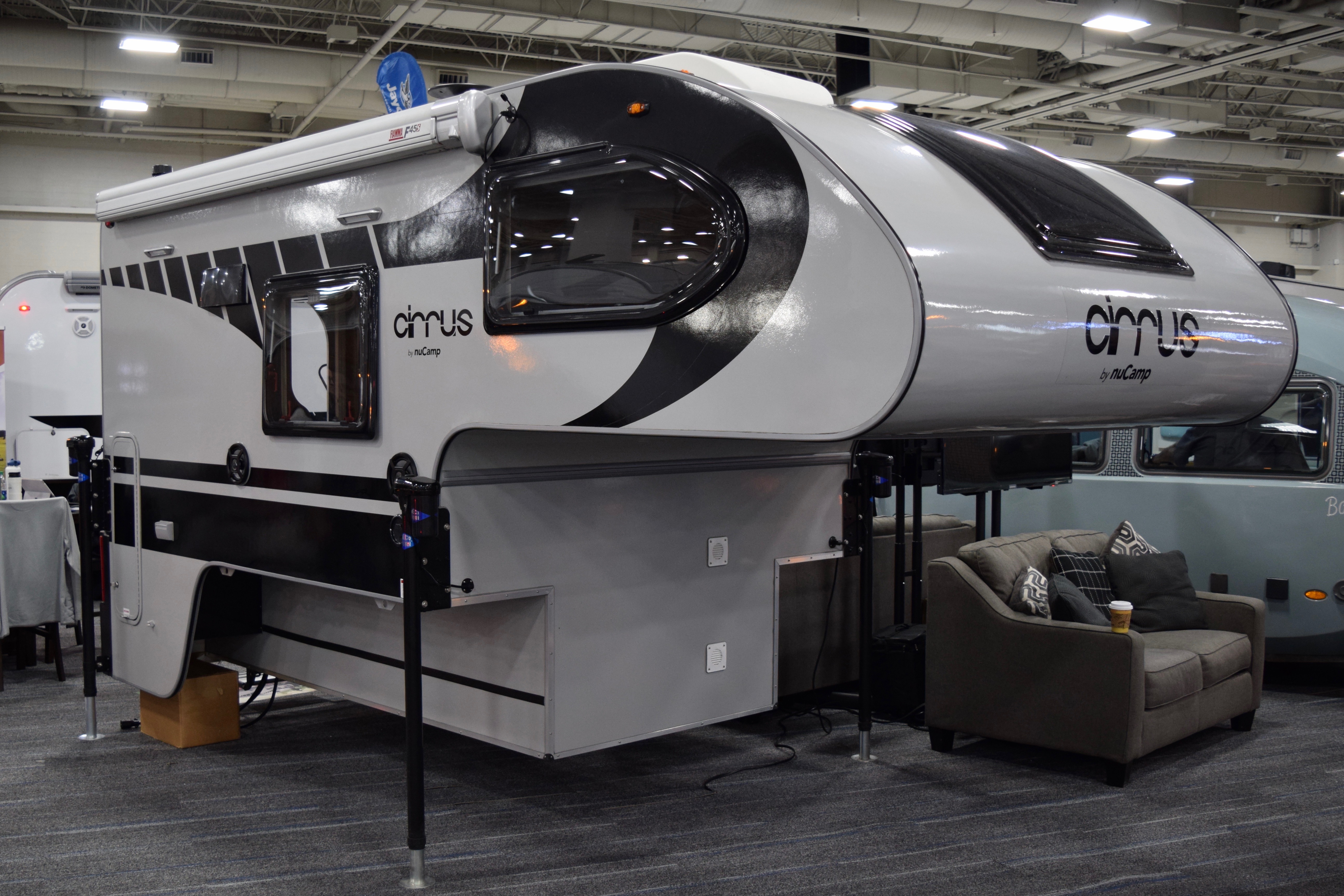 After months of development, NuCamp RV showcased its brand new Cirrus 720 truck camper at the 2019 RVX Show, March 12-14, in Salt Lake City. Designed originally as the Cirrus 670 for half-ton trucks, NuCamp decided to market the camper for 3/4-ton trucks instead after the design failed to reach the company’s stringent weight goals. Yet, in spite of this setback, the dry weight of the Cirrus 720 is still a slender 1,875 pounds, making it one of the lightest hard-side campers in today’s market with a wet-bath.

“We’re really excited about the Cirrus 720,” said Scott Hubble, NuCamp CEO. “Its got a new ascetic and a lot of new technologies that we’re introducing. The Cirrus 720, as a whole, marks a new gateway for us. Our first two campers, the Cirrus 820 and Cirrus 920 were decked out, heavier truck campers. The goal here with the lighter, Cirrus 720 is to make it more available to more trucks, while at the same time introducing a brand new ascetic. When you go lighter, lots of times, things get smaller on you, but here with our new bathroom and overhead cabinetry, we wanted to create a camper with a more open feel.”

Even though the camper was made for lighter trucks, the Cirrus 720 still has a lot going for it. Built by Amish craftsman employing European styling elements, the camper is 14-feet 9-inches long, 7 feet 1-inch wide, and offers an interior height of 6 feet 4 inches. The camper’s 8-foot 3-inch floorplan features a comfortable, split dinette in front with a Lagun swing away table, a wet-bath and a Norcold 3.7 cubic foot refrigerator on the driver side, and a kitchen and a large wardrobe on the passenger side. The camper features holding tank sizes of 20 gallons fresh, 22 gallons grey, and 5 gallons black, and comes with a single 20-pound propane tank, and a single Group-27 battery.

As you’d expect for a camper of this size, the Cirrus 720 doesn’t have a very large basement. In fact, it’s only 5 inches deep. Yet, in spite of its “small” size, the heated basement is still large enough to house the camper’s two holding tanks. This maximizes storage in the main cabin and keeps the center of gravity in the camper low, two important considerations in any truck camper design.

So how well is the new camper, which started production in early January, selling? “We made 36 in the first run. All 36 Cirrus 720 campers are sold. The second run is slated for June, those slots are already beginning to fill up, so those will probably be sold out in the next month or so,” Scott said.

The fact that the Cirrus 720 is selling so well is no surprise. The camper offers several mainstays that made earlier Cirrus truck campers such big sellers. These include the Alde hydronic heating system, which doubles as both a water heater and a furnace, Plasitform insulated “Euro” windows, a spacious cabover with a north-south queen-size bed and a large front window, laminated and bonded Azdel sidewalls, and the Froli sleep system. Standard features include a Norcold three-way 3.7 cubic foot refrigerator, lots of overhead storage, a glass-top stove and sink, two Fan-Tastic Vent fans, a Lagun swing-away table, a full walk-on fiberglass roof, an exterior shower, queen-size bed, an AM/FM/MP3 bluetooth stereo system, and marine quality speakers.

So what was Scott referring to when he mentioned the Cirrus 720’s new aesthetic? “Traditionally, we used light ply for our cabinetry, but it was very traditional in the way it looked,” Scott said. “What we’ve done here with the 720 is that we’ve created a more modern, residential, radiused look to the cabinetry. The cushions are more plush, the bathroom is very modern with the Tambour-styled door, which rolls in and out, and creates more visual space, when it’s not occupied.” In a new development impacting the entire Cirrus truck camper lineup, the cabinetry is no longer being imported from Italy and is now being constructed entirely by Amish craftsman in Ohio.

A good night’s sleep is often an elusive thing in a small RV like a truck camper. NuCamp addressed this vexing problem with a grid of plastic bed springs called Froli Sleep System, an imported product from Germany. But this innovative product does more than provide a comfortable night’s sleep—-it also eliminates condensation underneath the mattress, a major issue in many truck campers and in many areas of the country. One thing we noticed is that the Froli system in the Cirrus 720 is a little different.

“They [Froli] make a couple of different types,” Scott explained. “This one is a “roll out” type, the other one is called a “grid” type, which is what we put in our other campers. This one, obviously, doesn’t allow for different tensions, so its does take away some of the customization features, but it still provides the core benefits of the sleep system.”

While the Cirrus 720 sports the same exterior shape and graphics as earlier Cirrus truck camper models, there are some significant differences in this smaller camper, mainly with the bathroom. You won’t find a standard RV toilet and black water holding tank the Cirrus 720. NuCamp decided to go with a Thetford Cassette Toilet instead. We’ve always had an affinity for cassette toilets here at Truck Camper Adventure, so this change, in our opinion, is a big win for the consumer. The Cirrus 720 also features a low profile shower pan, which encroaches upon the main entryway to the camper. Some consumers won’t like this feature, but when it comes to a lightweight truck camper with a complete wet-bath, you can’t always get what you want. Still, the bathroom shows true innovation rarely seen in today’s truck camper, something that NuCamp seems to serve up on a regular basis.

“We strive to be different,” Scott said. “We feel that doing our own cabinetry with the Ohio Amish craftsman that we employ sets up apart, the hydronic heater is another separator for us, and obviously the European aesthetic. We get inspired a lot from Europe, we go annually to Dusseldorf, and see what the industry is doing over there. Obviously, things over in Europe are different from how they’re made here in the U.S. We get inspired a lot from overseas.”

PWM or MPPT: Which Solar Charge Controller Should I Buy?

Are you thinking about going solar, but aren’t sure which type of charge controller to buy? You’re not alone. Many have or are currently grappling with that question. Fortunately, when it comes to makes, models, [read more]

If you’ve been following the Truck Camper Adventure Instagram feed, it’s no secret that the Roadrunner is now sporting a massive, new lithium battery. Called the Expion360 VPR 4Ever Platinum 360, the battery boasts a [read more]

Interested in building a truck camper rig using a classic truck? Mark Cymbaluk, owner of Overland Explorer Vehicles, did just that using a 1965 Chevy C30 and one of his Summit chassis-mounted campers. Here’s how [read more]