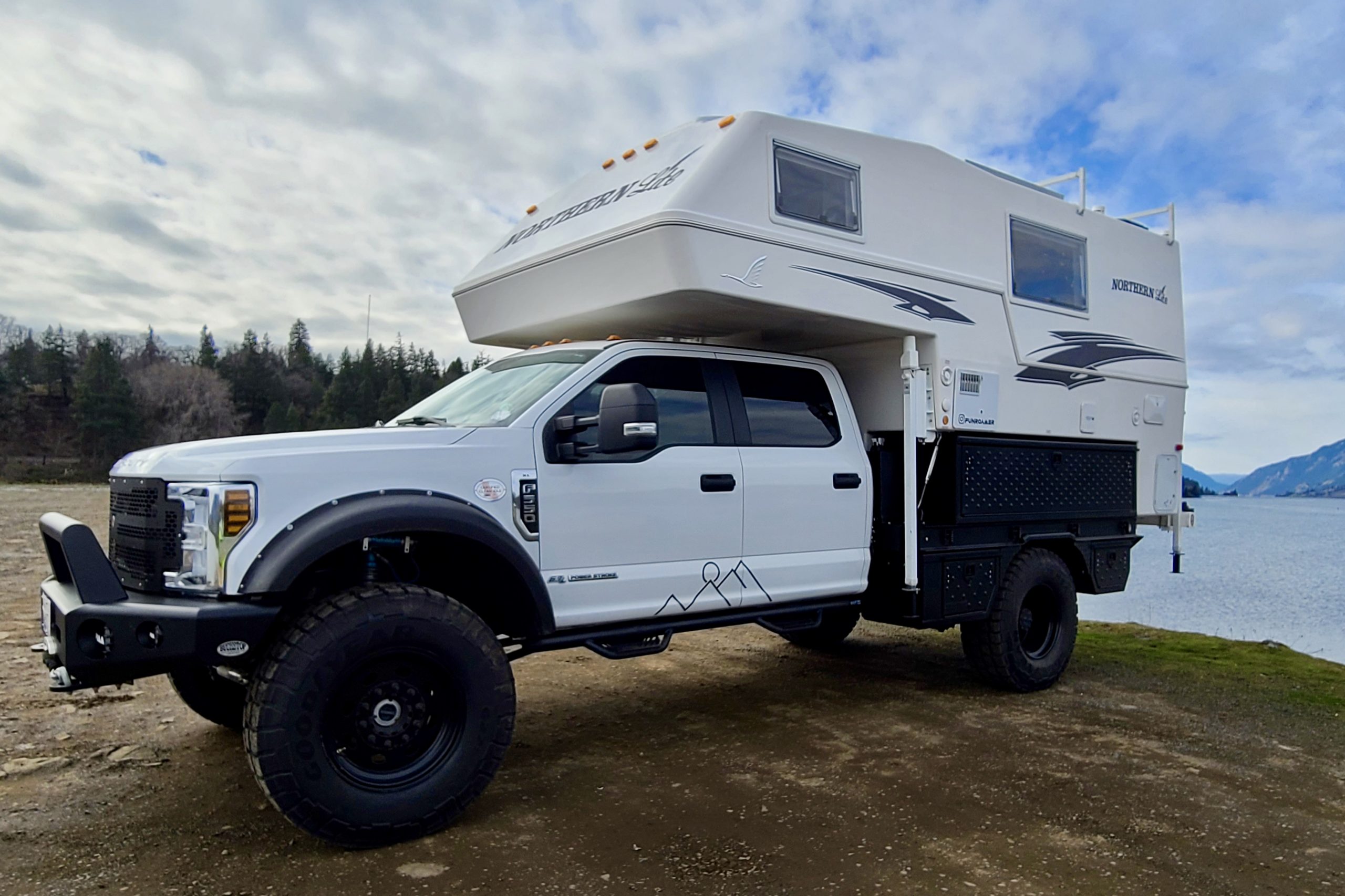 There’s no doubt about it, Instagram is a mixed bag when it comes to content. Much of its content is superficial, yet you can still find Instagram feeds that are both inspirational and educational. Corey Hoffman, who goes by the name, Funroamer, runs one such feed. Over the months we watched the progress of his build, which went from an nearly unusable truck and camper combo, to one that is now sleek, utilitarian, and fun to drive. In this interview, Corey explains why he decided to not only upgrade to a Ford F-550 with super singles, but also why he switched to a Northern Lite 10-2 truck camper and a custom flatbed. Yes, the reasons why are well-known to most of us, but the thought process behind the decisions are still interesting to read nonetheless.

TCA: Thanks, Corey, for talking with us. Where are you and your wife from?

Corey Hoffman: I was born and raised in Portland, Oregon. After high school I attempted the college experiment at the University of Nevada-Reno, and it didn’t go well academically. I paused the experiment and moved to Sun Valley, Idaho for a couple years, then later finished College at Portland State University. My wife, Kathleen, was born and raised in Maine, attended college (successfully) at Ithaca University, moved to Park City, Utah for five years then moved to Portland, Oregon to attend the University of Natural Medicine where she received her Doctorate. I sold my business in January 2019 and am now retired. Kathleen is a physician and owns her own private practice in Hood River, Oregon.

TCA: How long have you owned your Northern Lite 10-2LE truck camper?

Corey Hoffman: We bought our Northern Lite camper in the spring of 2020, so coming up on a year.

TCA: Can you tell us about your camper and why you chose that particular make and model?

Corey Hoffman: After a long trip thru Baja, Mexico in our former set-up, which included a one-ton SRW Diesel truck and a Arctic Fox 990 camper, it was clear we needed a lighter camper and a truck with more payload. The Northern Lite 10-2 was appealing to us because of its clam shell, fiberglass structure, long warranty, nice finish, and very usable, well thought-out interior without the use of a slide-out.

TCA: What mods have you made to your truck camper to make it more livable?

Corey Hoffman: Really, it’s just little things like adding hooks inside, storage bins for home school supplies, drying racks for ski boots and gloves. The biggest mod for us has been the custom flatbed. 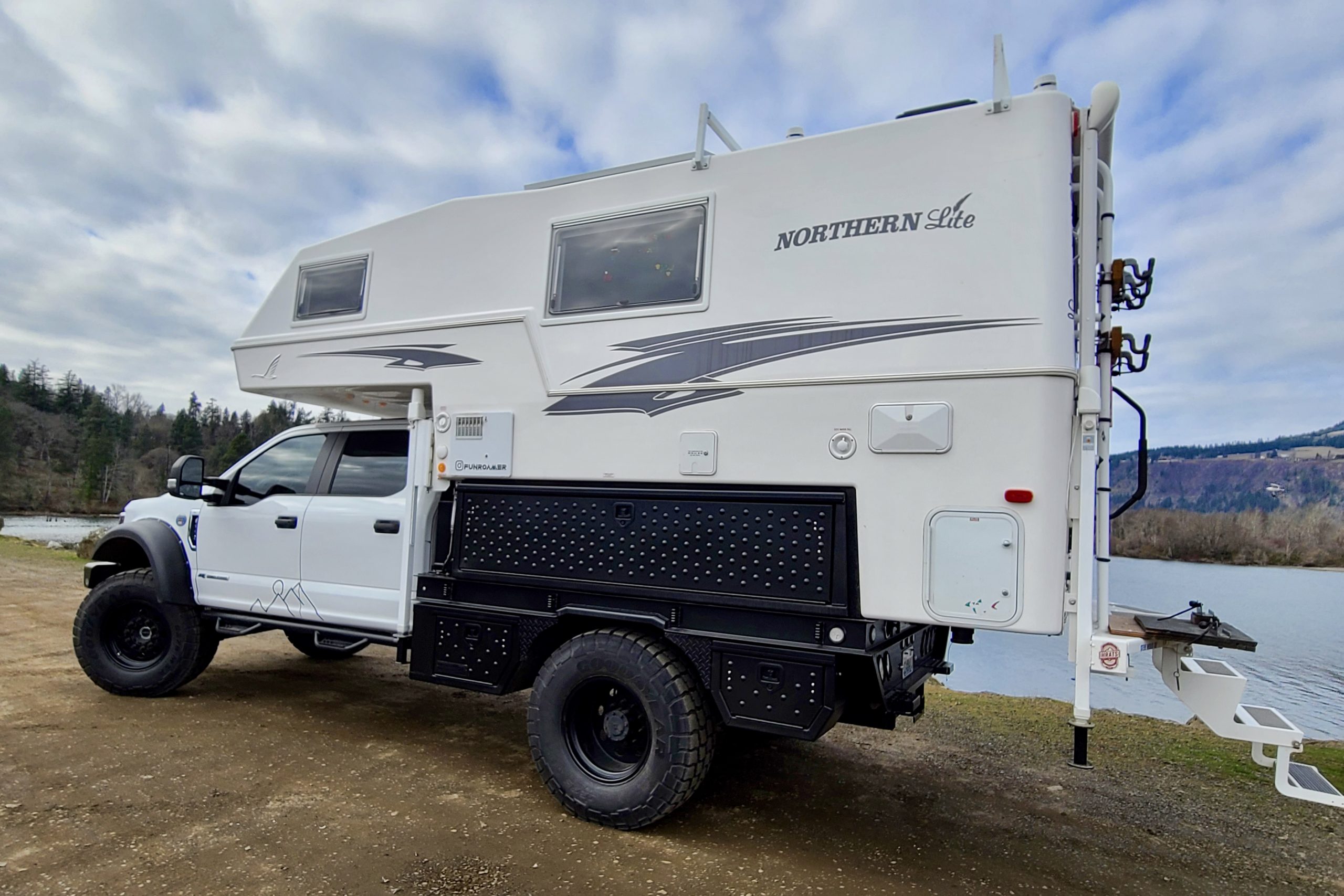 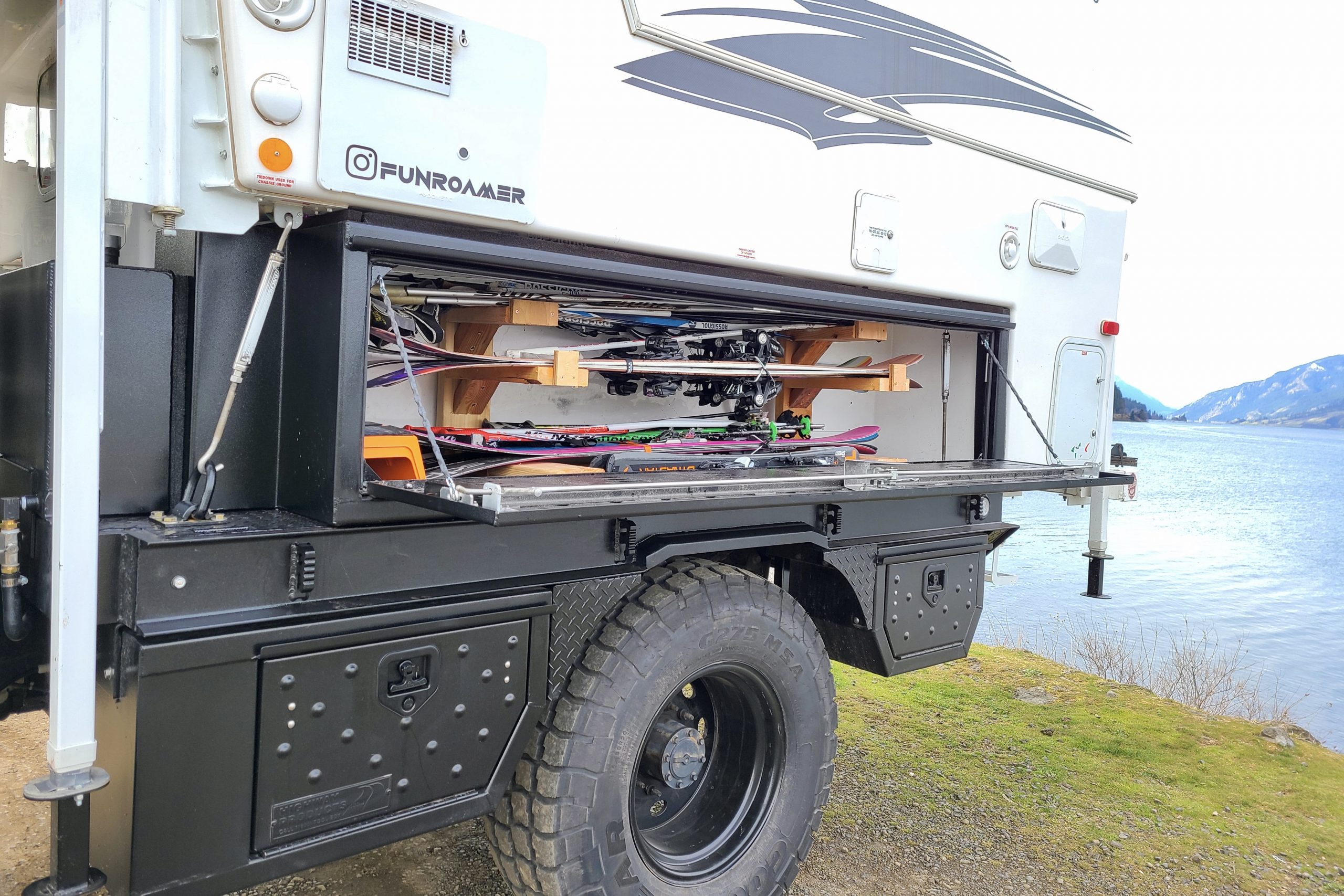 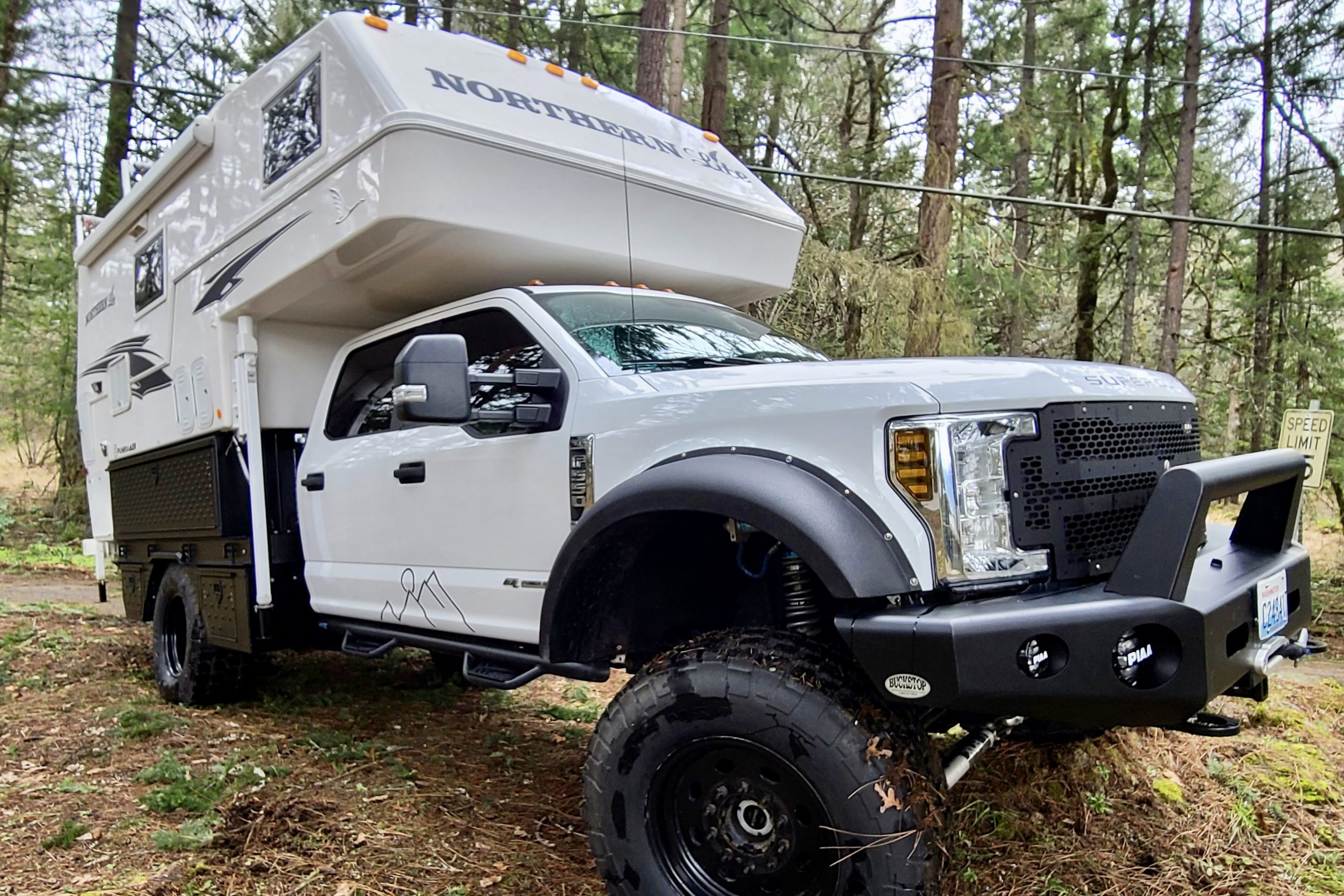 TCA: Can you tell us about your flatbed and some of its features?

Corey Hoffman: The flatbed and slide-in camper combo has really been a game changer for us. We carry quite a bit of equipment with us such as skis, mountain bikes, surf boards, kite surfing kites and boards, wet suits, and fishing gear. Without the slide-in camper on a flatbed all that gear either goes into a roof top box, which really increases the height, or it needs to go inside the camper. I worked with Ryan Bahn of Bahn Camper Works on the design that fits our needs, while offering functionality with the camper off of the truck. Highway Products out of Medford, Oregon finalized the engineering and made the bed come to reality. The side doors are framed in creating a solid sealing and locking mechanism and also allows for quick and easy access to gear. The under-bed boxes are great for tools, chains, spare parts, etc. Ryan did the install and camper integration, which includes an ARB dual compressor and tank, an auxiliary 40 gallon diesel tank, so we can now carry 80 gallons of fuel. An auxiliary, 40 gallon fresh water tank has also been added giving us a total of 73 gallons of fresh water!

TCA: Nice! Do you use solar power or a generator to keep your truck camper’s batteries topped off?

Corey Hoffman: It really depends on where we are going and how long we will be there. In general, the summer months and fall Baja trips we are perfectly fine just using solar. On the other hand, the Pacific Northwest winters are very grey, so we tend to carry a Honda EU2000i for topping off the batteries. The furnace also needs to run during the winter, which is our largest power draw.

TCA: Can you tell us about more about your Ford F-550 truck? You had a single wheel conversion done to it, correct?

Corey Hoffman: Yes. Our truck is a 2018 Ford F-550, 60-inch cab to axle crew cab. We have the Buckstop Truckware Single Rear Wheel Conversion Kit on it. After chasing the “death wobble” a bit and adjusting the caster angle, the truck and conversion has been great.

TCA: The super singles look great. Having an F-550, we assume you are under your truck’s GVWR. Have you had your rig weighed?

Corey Hoffman: The truck has a GVWR of 19,500 pounds.  All loaded for months on the road with an assortment of toys we weigh in at 15,800 pounds.

TCA: Perfect! Did make any modifications to your truck’s suspension?

TCA: We love your Buckstop front winch bumper. Which model did you get?

Corey Hoffman: We have the Buckstop Boss model with winch and added PIAA lights and a 18,000-pound Superwinch. 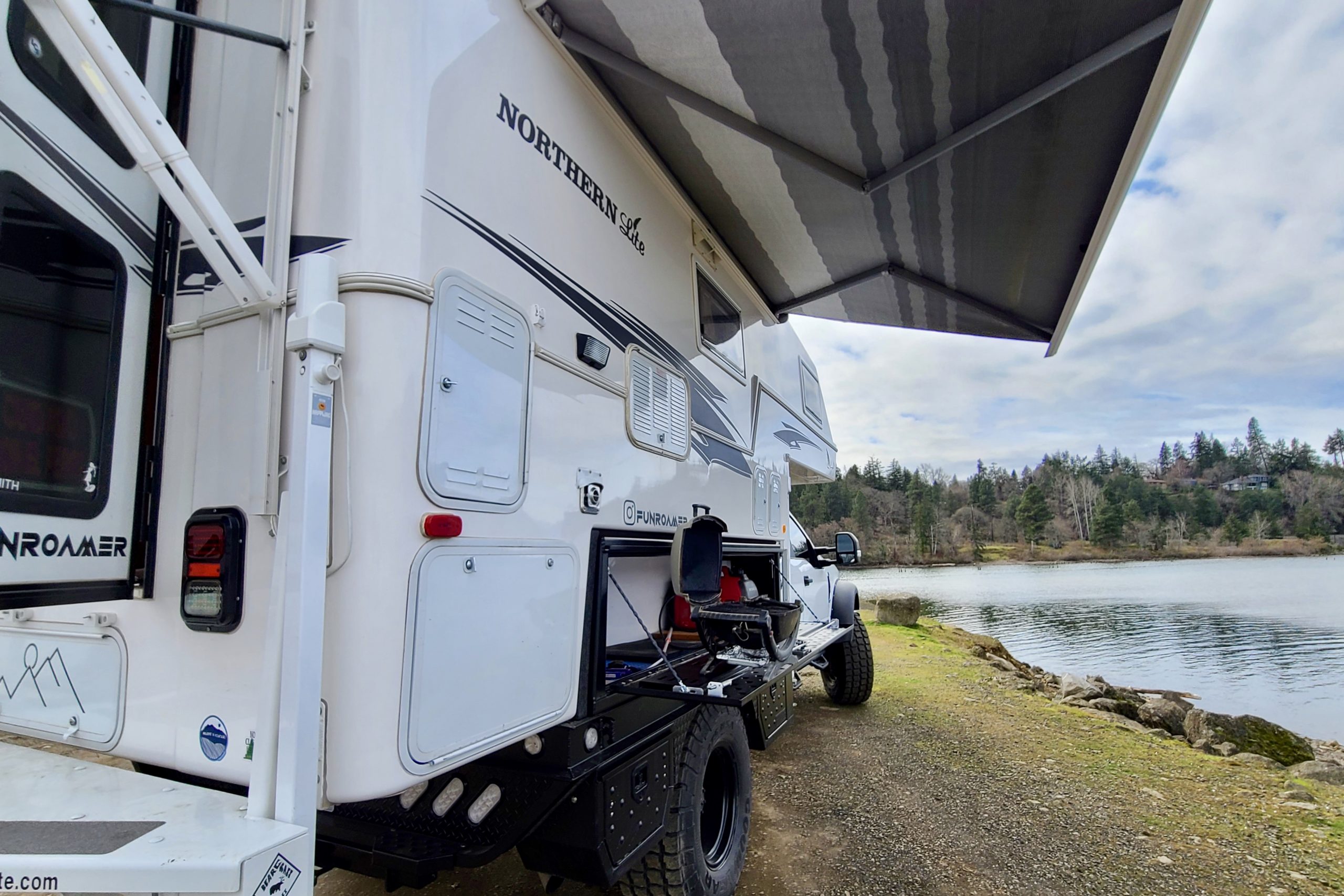 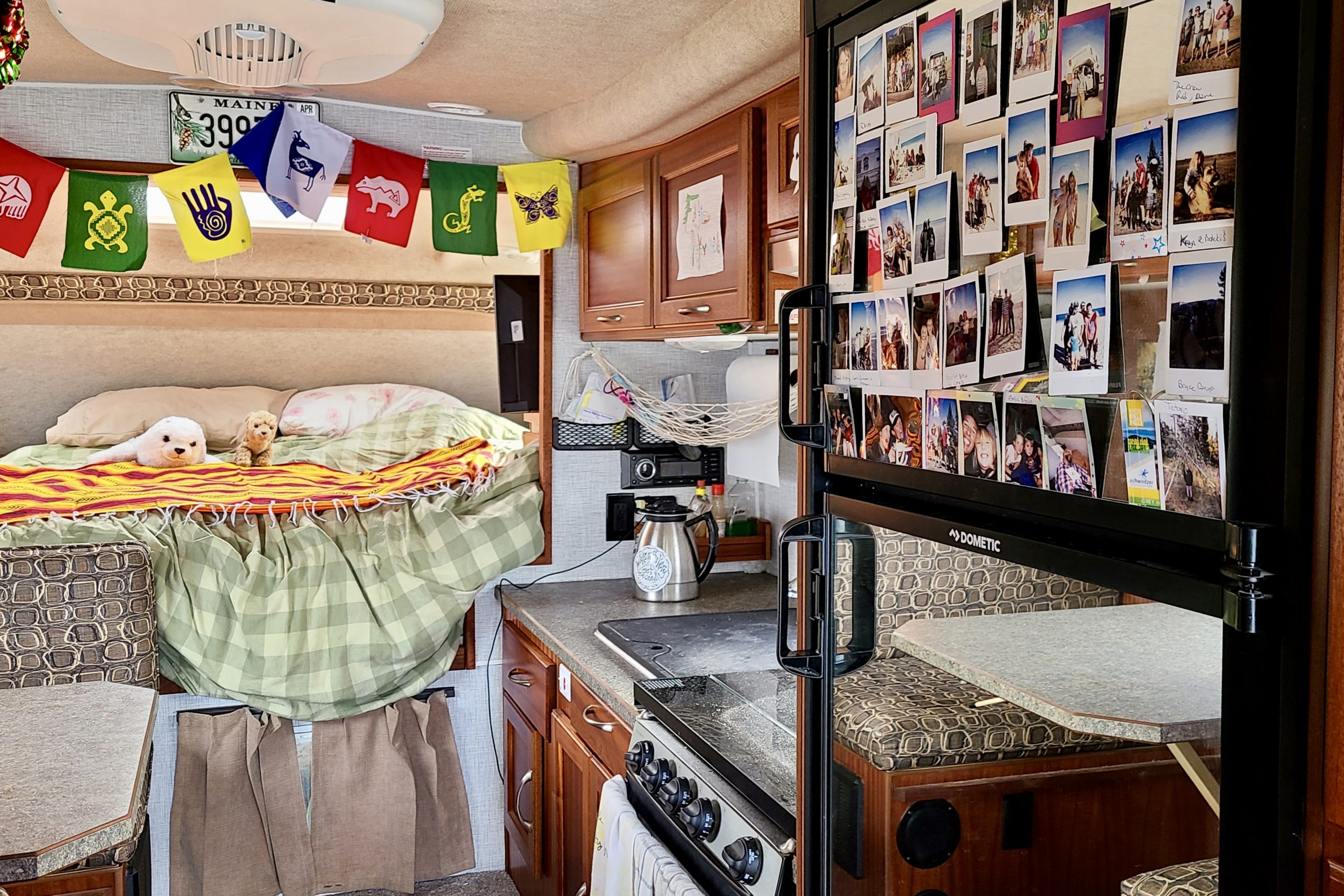 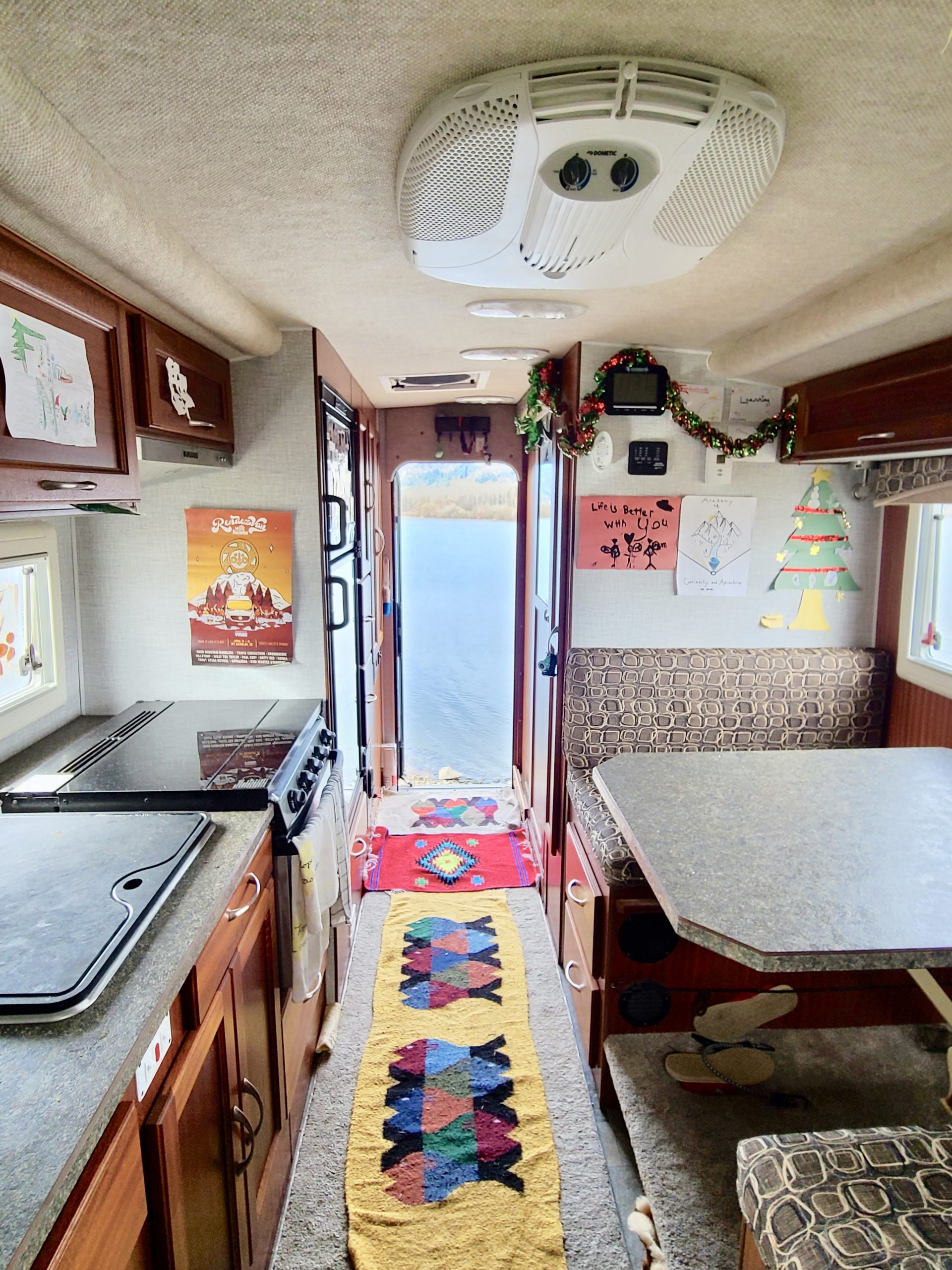 TCA: Do you have any regrets in any of your truck and camper choices? Anything you wished that you had done differently?

Corey Hoffman: The biggest challenge with our set up is the height.  We come in at 12-feet, 6-inches to the top of the AC unit. We will most likely remove the A/C and TV antenna, which will bring us under 12 feet. When we are navigating small towns south of the border, I sometimes wish I had a pop-up camper. However, 90 percent of the time our Northern Lite is the right call for our lifestyle and travels.

TCA: What is the longest amount of time you spent in your camper?

Corey Hoffman: We just returned from a four-month trip to Baja in our camper. Four months with two adults, our seven-year-old daughter, Scarlet, and our 70-pound pup, Rally. Our South America journey will likely last over a year.

TCA: Where have you been in your truck camper thus far?

Corey Hoffman: This past year we have been all over the Pacific Northwest, Montana, Utah,  Idaho, Wyoming, Arizona, California, and Baja California.

TCA: What kind of mileage are you getting with your setup?

TCA: What wheel and tires do you have on your truck and what inflation values do you typically run?

Corey Hoffman: The Buckstop Single Rear Wheel Conversion Kit also comes with their 20-inch wheels. I have been running the Continental MPT-81 EarthRoamer-size tires with mixed reviews. They handle well overall and provide a hefty load rating. The downside, of course, is the road noise, rotation needs every 3,000 miles, and they didn’t last very long. I just put the Goodyear G275 MSA tires on. Initial impression is they are much quieter, but still too early to tell if they will last any longer. Typical psi is 70 rear and 55 front. For long washboard drives I typically air down to 35 psi on all four. 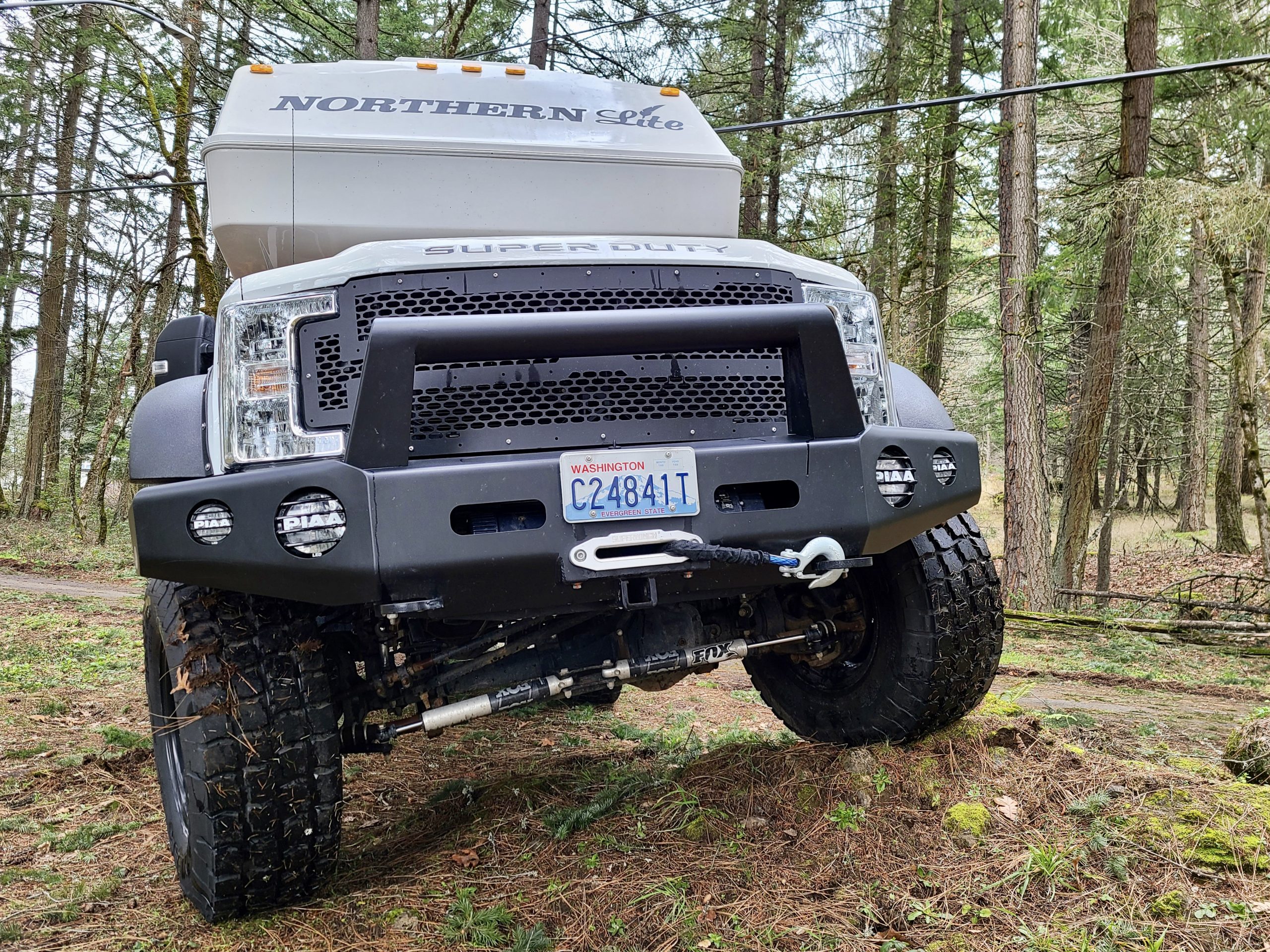 TCA: What kind of places are you planning to visit in your truck camper rig?

Corey Hoffman: We have tentative plans for a Pacific Northwest to South America in 2022.  Our immediate plans are to use the camper three to four nights per week skiing, biking and surfing the Pacific Northwest as well as making fall runs south of the border.

Corey Hoffman: We are not too savvy as far as this goes.  I did create an Instagram @funroamer for the truck build in an attempt to share what I learned throughout the process as well as share our travels to Baja this past fall.

TCA: Is there anything else you’d like to tell us about your truck camper rig before we close?

Corey Hoffman: My parting thoughts really are that there is no perfect rig. Just get out there! I have been sleeping in ski resort parking lots and trailheads for 30 years in everything from the back of a truck, in a van, trailer, class-C, and truck campers. This current setup fits our lifestyle very well although it can feel a bit crowded at times. There are trade-offs to each rig and each one has its advantages and disadvantages. 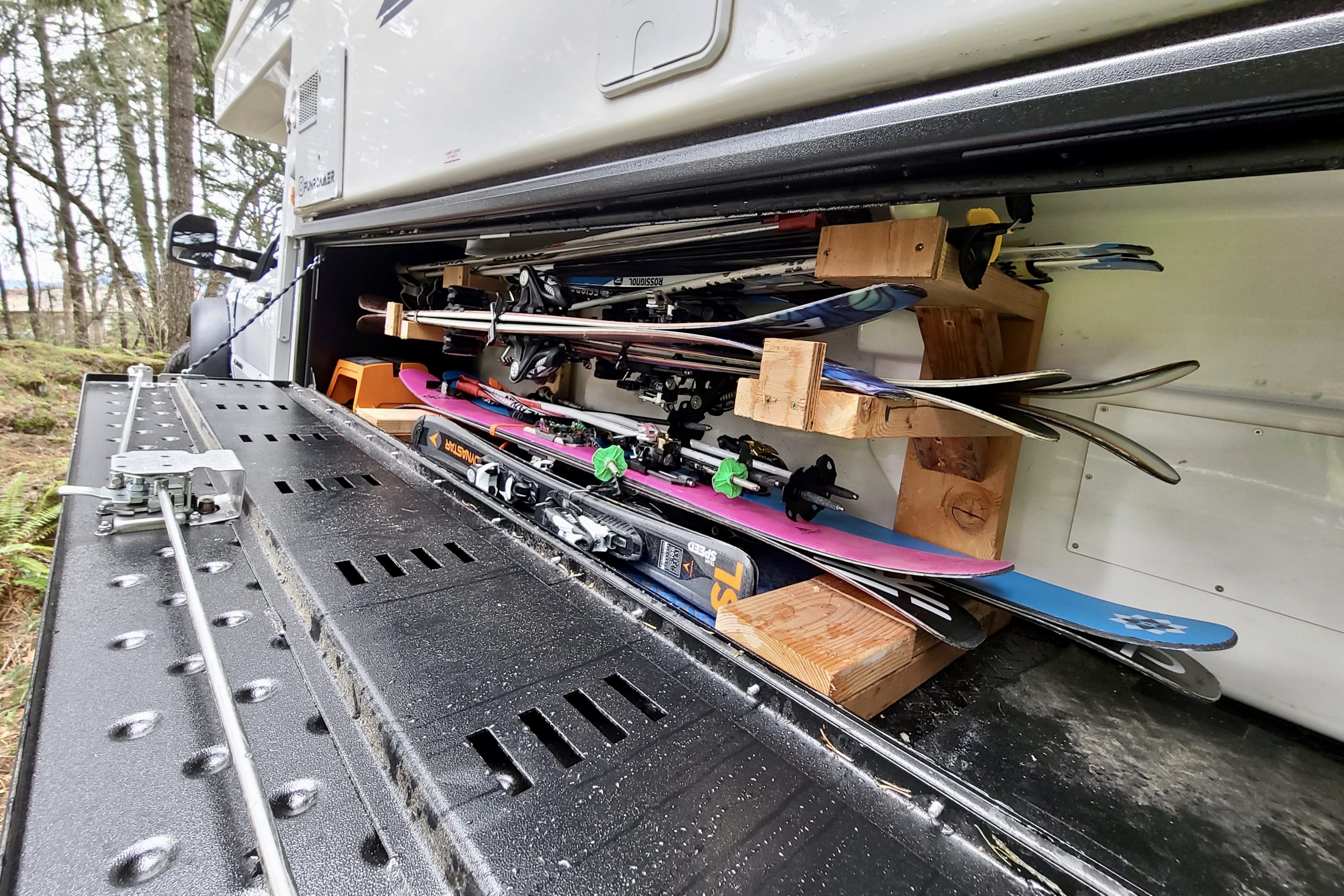 About Mello Mike 622 Articles
Mello Mike is an Arizona native, author, and the founder of Truck Camper Adventure. He's been RV'ing since 2002, is a certified RVIA Level 1 RV Technician, and has restored several Airstream travel trailers. A communications expert, he retired from the U.S. Navy in 2004 as a CWO3 after 24 years, worked in project management, and now runs Truck Camper Adventure full-time. He also does some RV consulting, repairs, and inspections on the side. He currently rolls in a 2013 Ram 3500 with a 2021 Bundutec Roadrunner truck camper mounted on top.
Website Instagram YouTube