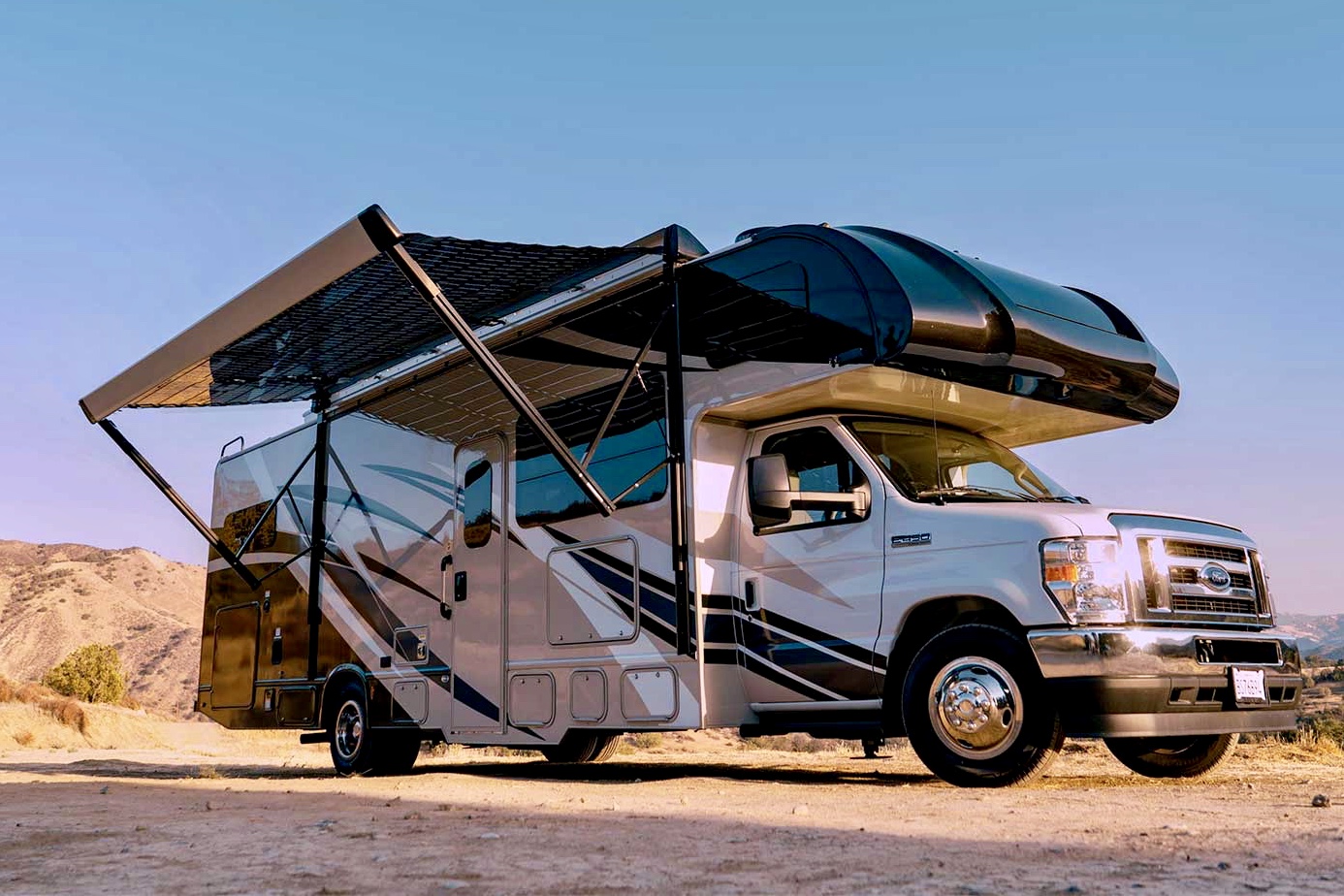 Years ago I told my wife that somebody was going to build a solar awning for RVs one day. Well, that day has finally arrived. Xponent Power recently released the first retractable solar awning for RVs. Deployed with the simple push of a button, the Xpanse solar awning not only provides valuable shade to make warm days cooler, but also generates over 1,200 watts of power to recharge the batteries in your camper. Unfortunately, the price isn’t cheap—the standard, 16-foot model sells for a hefty $7,500. In spite of the cost, however, the response from the RV community has been overwhelmingly positive since its release last year. So much so, that delivery for current orders has just been extended to mid-2023. We are told that one large RV company will be using them as OEM.

“Solar is the preferred source of power for RVs, but let’s face it, roof space is limited. You’re lucky if you can fit two or three large panels on the typical RV roof,” said Xponent Power Founder Rohini Raghunathan. “Our research indicates that RV owners overwhelmingly want to go boondocking more often but are fundamentally limited by access to power. With the Xpanse Solar Awning, we are enabling RV owners to generate substantial power on the go so that they can go off-grid more often.”

The Xpanse solar awning is compatible with the 12 volt solar and electrical systems found in today’s recreational vehicle. Capable of being integrated with existing rooftop installations, Xpanse’s solar awning can be used to extend a camper’s solar power generating capabilities even more. For example, if you already have a 600 watt solar power system on your roof, one of these awnings can be used to triple the solar power system of your camper from 600 watts to a whopping 1,800 watts. Who wouldn’t like that?

The design of the Xpanse solar awning is revolutionary. Using glass-encased solar cells formed into 50, 3-foot x 8-inch sub panels, the awning’s patented design creates small gaps between the sub panels when slightly retracted. These gaps allow air to pass between them, greatly reducing wind drag and uplift even in high winds. Additionally, the awning has a built-in intelligence system that detects high winds and adverse weather conditions to automatically retract itself to safety when needed. According to the company, the awning also passed a series of rigorous tests to ensure its robustness in heavy rain and 45-mph winds.

The awning’s size can be customized depending on the amount of space available on the RV, and the amount solar power desired by the customer. The standard system is approximately 16 feet long and can be scaled down in 3-foot increments. This is good news for truck camper owners with installed awnings of half that size.

“Traditional awnings that consist of a very large continuous piece of fabric experience huge wind uplift even at rather low wind speeds, very much like a sail. In contrast, the Xpanse solar awning has an innovative, patented design that creates small gaps between the solar panels when they are slightly retracted. These gaps allow wind to pass through, greatly reducing the wind uplift and making the awning intrinsically wind-tolerant. This means the awning can be kept open and produce power even at relatively high wind speeds. What’s especially great about this awning design is that it uses intelligence to detect wind speeds and to provide the necessary wind relief when needed,” he said.

Truth be told, we’ve never been a big fan of awnings on hard-side truck campers. We’ve written about the limitations numerous times. The excessive height when the camper is mounted on the truck coupled with the shorter lengths of truck camper awnings limits the amount of shade that they can provide, but a solar awning changes everything. If Xponent’s design is as robust and durable as they say, the awning could be a game-changer. This is especially true for truck campers and vans with limited roof space. Unfortunately, if you’re interested in buying a custom-size, solar awning, it won’t be delivered until late 2023 due to the insane demand and backlog. 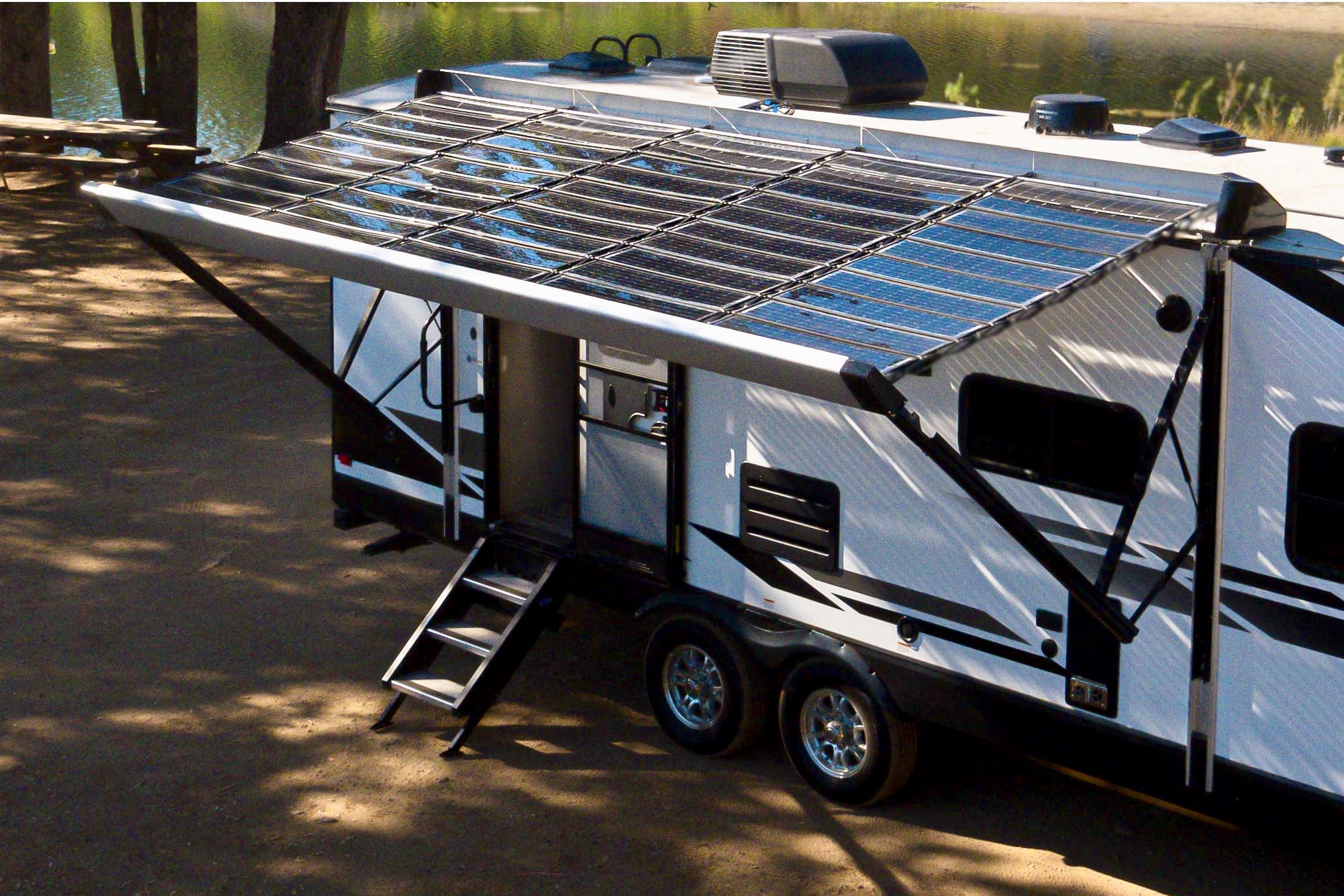