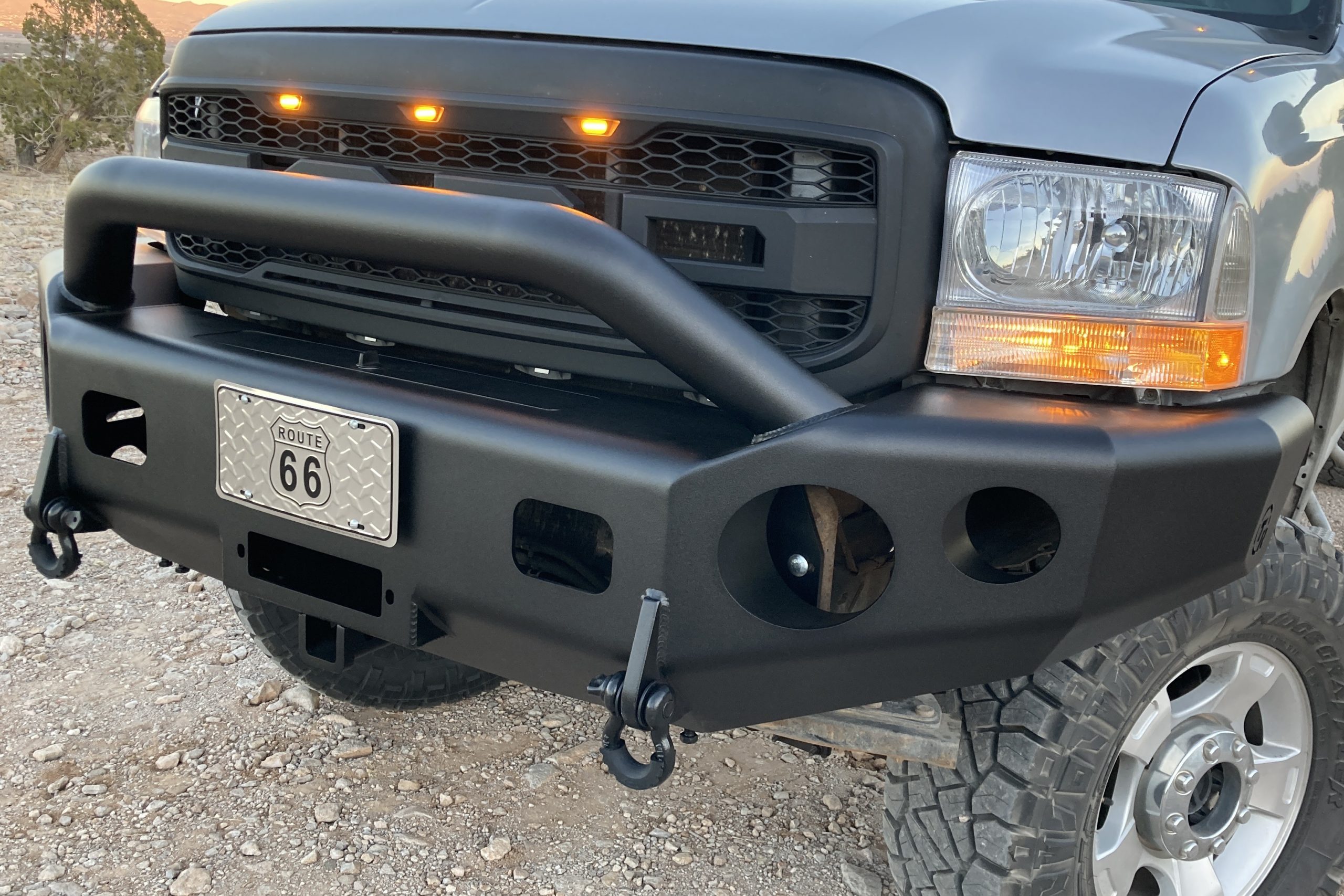 For those who spend a lot of time in their rig off-road, an aftermarket front bumper with some kind of brush guard is essential. Not only can it protect the front end of your truck from scrapes and grille damage from impacts, it can also prevent injury during an accident with another vehicle or when hitting an animal. But an aftermarket front bumper like those made by Buckstop Truckware have other benefits, too. Things like extra lights, tow hooks, hitch receivers, and winches can be added to them, providing not only good looks, but added functionality.

Our 2003 Ford F250-Four Wheel Camper Grandby Rig needed some help on the front end. We already added an aftermarket “Raptor” grille, which made a dramatic improvement in looks, but an added touch of protection was needed. We opted to go with a Buckstop Truckware TrailReader Pre-Runner Bumper due to our truck’s 6-inch lift. We simply didn’t think the standard brush guard height of the Buckstop Baja would look as good or be as functional as the pre-runner style on our truck. But don’t think for second that this TrailReady bumper is in any way weaker or less capable than a Buckstop front bumper. Made in the USA using American steel, the pre-runner bumper, which weighs approximately 210 pounds, provides just as much protection as any bumper made by Buckstop.

As the name implies, Buckstop Truckware front bumpers are built to stop livestock from damaging the front end of your truck. As you know, the OEM bumpers and grilles that come standard in today’s truck offer little in the way of protection for the radiator and engine. Even a low-impact collision off-road can leave you stranded miles away from help. Buckstop Truckware’s TrailReady bumpers come with an impressive array of features including a heavy duty brush guard, a fully enclosed winch area with a winch access cover door, four Frenched light buckets, a 2-inch trailer receiver, two tow hooks, and a license plate bracket. You can buy a TrailReady front bumper anywhere between $2,200 and $2,600, depending on the style.

So what are the differences between a Buckstop front bumper and a TrailReady front bumper? According to Dorian Hartfield, Buckstop Truckware Co-Founder and CEO, “the TrailReady bumper line as compared to Buckstop is more agile in appearance. Where TrailReady shines is in the minimal, low-profile look— especially the Pre-Runner model. It offers exceptional protection without an overbearing appearance. The bumper protrudes less forward, wraps more tightly under the headlights, and the winch is tucked in deeper. Recovery points are by way of screw-pin clevis shackles as opposed to fixed hooks. Structurally, Buckstop and TrailReady are very similar. TrailReady leans toward styling where Buckstop leans toward function.”

For those unfamiliar with Buckstop Truckware, the company is family owned and operated. The company was founded in 2001 by Tristan and Dorian Hartfield with an 800-square-foot space. Now headquartered in Prineville, Oregon, the growth of the company since then has boomed. The reason for this explosive growth is simple. All of the manufacturing is done in Prineville by experts. There’s no outsourcing, whatsoever. The company controls the manufacturing process from start to finish. Buckstop Truckware makes heavy duty front and rear bumpers for large and small trucks of all makes, including Ford, Chevy, Dodge, GMC, Nissan, and Toyota. They also make front and rear bumpers for fire and emergency vehicles. Buckstop ships half a trailer load each day.

This is our third Buckstop Truckware bumper and we simply wouldn’t go with anybody else. Not only does a Buckstop bumper provide your rig with an aggressive look, but they are also built like no other. Buckstop’s TrailReady bumpers are made with 1/4-inch steel in the primary impact zone and winch center and 3/16-inch steel under the headlights. Our 210-pound bumper is stout enough to house a winch with a rated line pull of 16,500 pounds with the standard 4.5-inch by 10-inch bolt pattern. This pattern will accommodate most winches available in the market today. The grill/brush guard is made of 2.5-inch circumference tubular steel to protect the front end from high impact strikes.

With the TrailReady bumper installed, the next phase will be purchasing a set of lights and a winch, but truth, be told the bumper looks great without these accessories. Still, we’ll probably end up buying a winch rated for 16,500 pounds and a set of 2-inch and 6-inch PIAA lights similar to what we have in the Buckstop bumper on our Ram 3500.

As you can tell, we are big fans of Buckstop Truckware. Having owned three Buckstop bumpers, we trust the company. It says something when firefighters and other emergency service organizations have their trucks outfitted by Buckstop Truckware. Lives are on the line. Like all other Buckstop Truckware reviews we’ve written, we heartily give the TrailReady Pre-Runner Bumper a rating of 5 stars. It’s a great product. 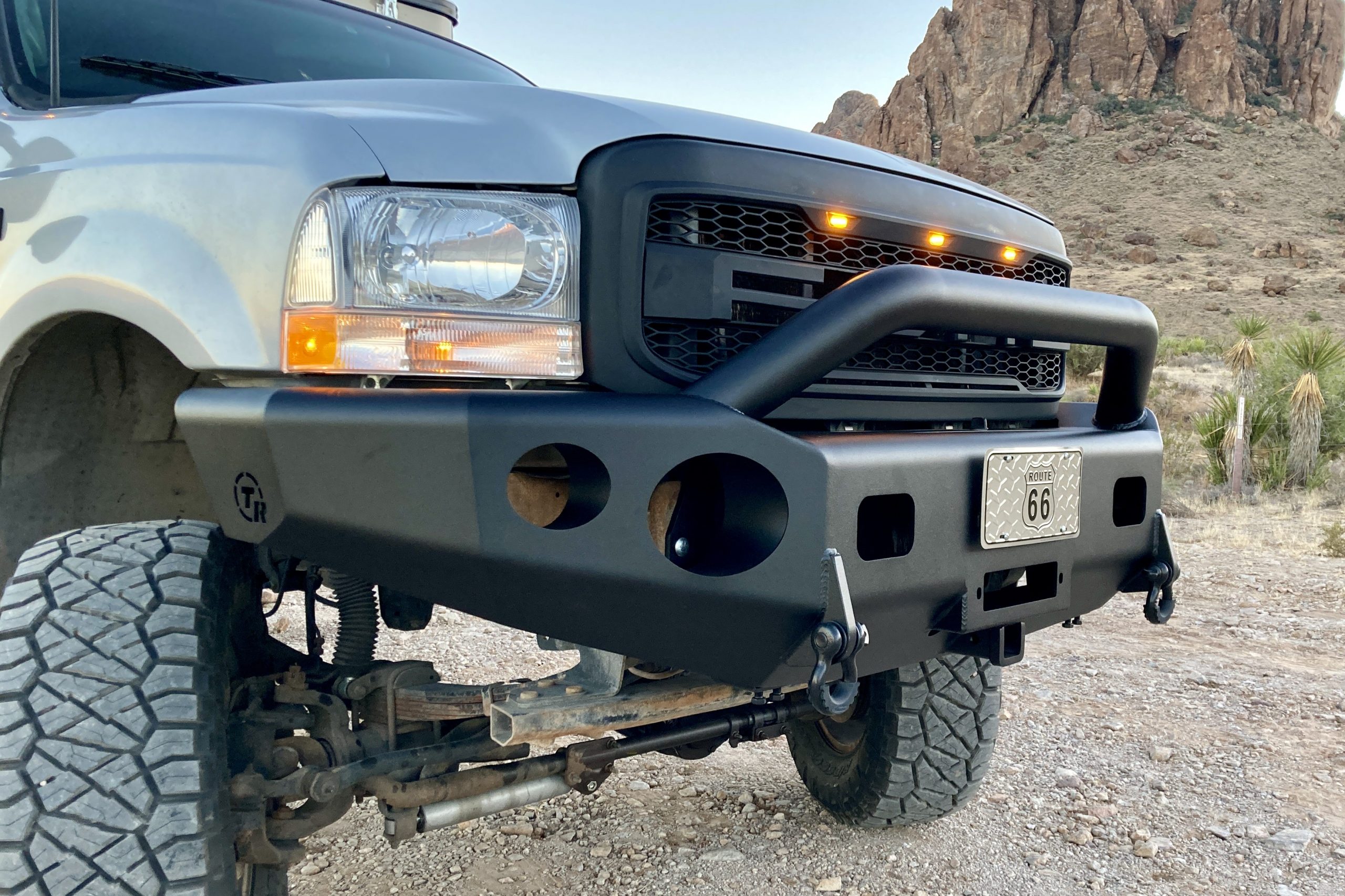 I had the pleasure of meeting Dorian Hartfield, Buckstop Truckware’s director of marketing and sales, at the recent Overland Expo West. For the show, Dorian displayed three of the company’s most popular winch bumpers, including [read more]